NCAs were initially made in the 1920s, [1,2] using a single amino acids and more recently, by Deming et al. [3] Interest in this area has increased thereafter where polymers such as poly-glycolides and their co-polypeptides are now used as substitutes for proteins. Some applications include preparation of tissue scaffolding and drug delivery [4,5,6] as well as synthetic wool and silk substitutes. [7] Three methods have been utilized to synthesize “NCA" monomers; those are the Leuch's, Fuchs Farthing and Silyazide method. The most frequently used methods are the Leuch's and Fuchs Farthing due to the ease of the removal of bi-products.

The 'Fuch Farthing' method arises from the use of triethyl phosphate, phosgene or its derivatives (triphosgene), at low temperatures, in inert solvents such as dioxin. Trisphogene (CO(O2CCl3))2 undergoes a nucleophilic attack at the carbonyl carbon. Trichloromethoxy (Cl3CO-), [8] the leaving group dissociates to a chloride anion and a molecule of phosgene, which reacts immediately. Triphosgene is typically used as an alternative to phosgene, due to it being much safer, easier handling and purification. [9] However, triethyl phosphate can be used over shorter time periods and with few side reactions.

Previous work focused on synthesis of five-member hetero-cycle rings (NCAs from an amino acid. The NCAs were then polymerized to form block polypeptides. Deming et al synthesized polypeptides, from NCAs', using organometallic catalysts under controlled conditions. His method of synthesizing achieved molecular weights up to 25000Da with low polydispersities. His group then went on to synthesize block co-polymers such as poly-L-lactide-co-glycolide (PGLA) [14] and poly-ε-caprolactone-co-glycolic acid-co-serine (PCGS) [15] using the same catalyst. This was done, by introducing different monomers after the initial monomer was consumed. More work has been done in the area, where di and tri-cyclic monomers were synthesised into stereo-specific polymers from cyclic monomers. [16] 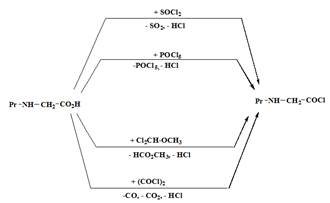 The purpose of this paper is to report the preparation and characterization of cyclic monomer '4-methyl-1, 3, 6-oxadiazocane-2, 5, 8-trione' (NCA-Alanine Glycine (NCA AG)) by wet synthesis. Alanine-glycine is a part sequence of silk, which is (Alanine-Glycine)3 Serine. Silk is widely recognised as the strongest polypeptide known of its size. [17] Attempts to synthesize a monomer to form silk polypeptides, [18] used dry chemistry and achieved up to six units of peptide. I will declare the synthesis of the NCA monomer s to form a nine-membered hetero-cycle ring NCA-AG and a polymer of immeasurable Da (>1 million Da).

Oxalyl chloride, potassium sulphate, magnesium sulphate, sodium bicarbonate and sodium hydroxide were obtained from Sigma Aldrich; silica gel and 2-(2-(tert-butoxycarbonyl) propanamido) acetic acid was obtained from Advanced ChemTech, South Africa and was used without further purification. THF, DMF, acetonitrile, and diisopropyl ethylamine were purified by re-distillation before use. Water was obtained from an onsite distilling and deionising system.

All amino acids and peptides were characterized by their melting points and Rf values (product front vs. solvent front), and by nexus FTIR, Oxford-NMR and Proteomics using a CapLC coupled with a Q-TOF Ultima ESMS. The melting points were noted with Perkin Elmer, melting point instrument (DMA 8000). Product front vs. solvent front was utilized from thin layer chromatography (TLC) using appropriate solvent systems. Nicolet Nexus Fourier-Transform infrared (FTIR) was used to characterize 'fingerprint' spectrums of organic molecules. A nexus FTIR instrument was used under inert conditions to improve the signal: noise ratios, and obtain better spectra. All the above instruments are in University of Stellenbosch, South Africa.

Molecular masses were obtained with time-of-flight electro-spray mass spectrometry (TOF-ESMS).Ionization by spray techniques are based on desorption of the ions of a compound from a chromatographically separated liquid solution, with a mobile phase that contains an electrolyte.

A solution of DMF (3.72 mmol, 0.2 ml) was cooled to (-20 0C) and freshly distilled acetonitrile (10 ml) was added drop-wise to oxalyl chloride (0.62 mmol, 0.054 ml). [19] After 30 min of stirring, Boc-AG-OH (0.62 mmol, 300 mg) and diisopropylethylamine (0.62 mmol, 0.088 ml) were added from a separate flask with acetonitrile (2 ml) and cooled to 00C and then further cooled to -200C. After 2h, the mixture was allowed to warm up to room temperature (over a period of 1h) and stirred for a further 4h. The reaction was quenched, by pouring the reaction mixture on ice. The product was extracted into ethyl acetate (3 x 10 ml), dried over 'MgSO4,the filtrate was dried under vacuum to afford the desired NCA-AG crystals. Recrystallization from ethyl acetate yielded yellow crystals with m. p. 114 0C, in 65% yield. The reaction scheme is presented in Equation 1.

The percentage yields melting points values of NCA dimers were considerably low, possibly due to the packing of NCA. They were relatively harder to synthesize.

The FTIR spectrum in Figure 3 shows the fingerprints of the molecular structure of the dimer NCA-AG. Points to observe are the absence of 'boc' C(CH3)3 groups 4# to 7#, increased intensity of amide bonds 'CO-NH' 4‑C5 at 1220 to 1020cm -1 range, decrease in amino acid groups and an up-field shift in carbonyls peaks for the carbamate range to 1649 to 1747 cm-1 (s/str). 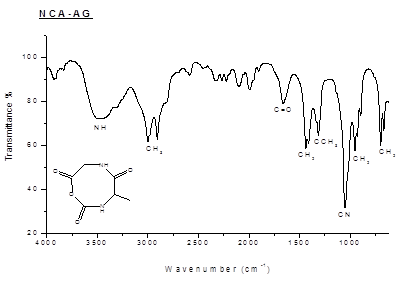 In general there is an up-field move, especially with the amides and an absence of boc groups (C7#), as seen in the proton spectrum of dimer-NCAs that is a by-product of the cyclization reaction. This can be seen in the spectra shown.

DMF was used as a standard solvent for cyclization, DIPEA as a proton grabber and oxalyl chloride (CO2Cl2) as the cyclising regent for the dimer cyclisaton. Oxalyl chloride was the most optimum cyclising agent for Boc-Ala-Gly-OH cyclisaton, as it's by products were easy to remove. The optimum temperatures were -20 initially to 30°C for the dimer cyclization. In this case, the dimer, 'Boc Ala-Gly OH' was investigated and an example of the reaction is illustrated in equation 2 below.

The most optimum conditions, which gave the highest yields for the cyclization reactions of NCA-AG were found to be those using dimethyl formamide (ACN/DMF) as a solvent. The best proton grabbers were found to be tertiary bases with oxalyl chloride as the Lewis acid. Temperatures were best kept as low as -20 for the first hour of the reaction and gradually brought to room temperature thereafter, for the dimers. All factors such as solvents, temperature and proton grabbers were optimized to push the equilibrium of the reaction forward. Attempts were made to improve yields of the NCA dimers by using other Lewis acids such as triphos, however, the yields were rather low and it was more difficult to clean up the products too. Reaction equilibrium seemed to favour polymerization to cyclization, where polymers at elevated temperatures conditions with immeasurably high molecular weights of poly (Ala-Gly) amide, were synthesized instead of the NCA dimer on occasion.

The authors wish to thank the staff at the University of Stellenbosch, particularly, Mrs. E. Cooper and Mrs. M. Hundall, for their contribution to this work. They would also like to thank the National Research Foundation of South Africa for funding the research, Professor Harald Pasch and colleagues at the Deutsches Kunkstoff-Institut for all the analysis and funding of my work in Germany. Finally, the contributions made by the department of Chemistry and Polymer Science and the University of Stellenbosch library, are gratefully acknowledged.