Medium M-199 is a well-defined nutritional source for cell culture media, developed in 1950 by Morgan et al. [1, 2]. It is the combinations of amino acids, vitamins and other factors, which exhibited the best growth of explanted tissue in the in vitro studies [3]. It was initially designed for nutritional studies to promote the growth of primary chick embryo heart and fibroblast cells in the absence of serum supplement [3, 4]. Although, the M-199 medium is also useful with serum for growth of a wide range of cell types such as non-transformed chicken, monkey, and human cells. The SFRE 199-1 medium (SFRE-M) is the modified form of medium 199, and developed for the growth and maintenance of mammalian cell culture (such as primary baboon kidney cells) [5]. It is obtained by supplementing the medium M-199 with sodium pyruvate, zinc sulfate, and increasing arginine-HCl, cystine, cysteine, L-glutamic acid, L-glutamine, glycine, tyrosine, histidine, and glucose to maximally active nontoxic concentrations [6].

Recently, the energy healing therapies have been reported for several beneficial effects throughout the word. Biofield energy treatment is one of the energy therapies that has been reported to alter the various physicochemical properties of organic compounds [10] and organic products [11].

The energy medicines have been categorized by National Center for Complementary and Alternative Medicine (NCCAM) under the CAM therapies [12]. There are several proposed mechanism and explanations are offered to support the biofield energy therapies. Consciousness is one of the possible mechanisms, which includes healer’s intent to heal, may interact with the physical realm [13]. Likewise, physical resonance is another theory that includes subtle energies. According to this theory, the energy might be exchange between the energy fields of healer and patient [14]. The healer or practitioner of energy medicine harness the energy from universe and transmit it to the object (living or non-living), which is called biofield energy treatment. Mr. Trivedi is a renowned practitioner of energy medicine and his unique biofield energy treatment is known as The Trivedi Effect® that has been studied in the field of agricultural science research [15], biotechnology research [16], and microbiology research [17], etc.

After conceiving the significant impact of biofield energy treatment in different field of science, the present study was attempted to evaluate its impact on the culture media such as SFRE-M culture media. The biofield energy treated SFRE-M was analyzed along with the control sample using several analytical techniques like elemental (CHNO) analysis, X-ray diffractometry (XRD), thermogravimetric analysis-derivative thermogravimetry (TGA-DTG), DSC, and Fourier transform infrared (FT-IR) spectroscopy. The data of treated sample was compared with that of control as well as reported literature data.

The SFRE 199-1 media (SFRE-M) was procured from HiMedia Laboratories, India. It consists with several inorganic salts, vitamins, amino acids, sugars, etc. (Table 1). The SFRE-M was divided into two groups; one was kept as control (without treated) while another was handed over to Mr. Trivedi to render the biofield energy treatment under laboratory conditions. Mr. Trivedi provided the biofield energy treatment to the treated group via his unique energy harnessing process through the thought transmission (without touching the sample). Then, both the control and treated samples were explored with respect to physicochemical and spectroscopic properties using various techniques like elemental (CHNO) analysis, XRD, TGA-DTG, FT-IR and UV-vis spectroscopy.

The control and treated samples of SFRE-M were analyzed for their elemental composition, carbon (C), hydrogen (H), nitrogen (N), oxygen (O), and sulfur (S). The analysis was done using Model Flash EA 1112 Series, Thermo Finnigan Italy. This analyzer combusts and then converts the C, H, N and O sample elements to simple gases, i.e. CO2, H2O, N2, and O2, which were determined quantitatively to deduced the net contents of respective element in the sample. The percentage change in element of the treated sample with respect to the control was determined using the following equation.

Here, ET and EC are the element in control and treated samples, respectively.

The XRD analysis of control and treated samples of SFRE-M was done on Phillips (Holland PW 1710) X-ray diffractometer with copper anode and nickel filter. The wavelength of XRD instrument was set to 1.54056Å. The percent change in crystallite size (G) was calculated using following equation:

The TGA-DTG analysis of control and treated sample was carried out on Mettler Toledo simultaneous TGA-DTG analyzer. The analytes were heated up to 400ºC from room temperature at the heating rate of 5ºC/min under air atmosphere. The onset temperature of thermal degradation and temperature at which maximum weight loss occur (Tmax) in samples were obtained from TGA-DTG thermogram.

The melting temperature and latent heat of fusion of control and treated SFRE-M were determined using the Pyris-6 Perkin Elmer differential scanning calorimeter. The samples were heated upto 300ºC at the heating rate of 10ºC/min under air atmosphere with air flow rate of 5 mL/min.

The FT-IR spectroscopy was carried out to evaluate the effect of biofield energy treatment on force constant and bond strength in chemical structure [18]. The samples for FT-IR analysis were prepared with spectroscopic grade KBr into pellets. The spectra were recorded on Shimadzu’s Fourier transform infrared spectrometer (Japan) with the frequency array of 500-4000 cm-1.

The elemental analysis is used to quantify the percent content of elements present in the organic compounds or products. The impact of biofield energy treatment on C, H, N, and O is reported in Table 2. The result showed that content of carbon, hydrogen and oxygen were decreased with 2.16, 4.87, and 5.89%, respectively in the biofield treated SFRE-M as compared to the control. On the other hand, the content of nitrogen element was increased significantly by 9.49% in treated sample with respect to the control SFRE-M.

Although, the mammalian cell culture require numerous essential components, but the nitrogen content is the principal requirement for the proper growth and development of primary mammalian cells [19, 20]. There are several nitrate salts and amino acids used as the source of nitrogen in the culture medium [21]. In the present study, the nitrogen content was increased significantly in the treated sample as compared to the control. This might be useful for the better growth of mammalian cells as compared to the control SFRE-M. 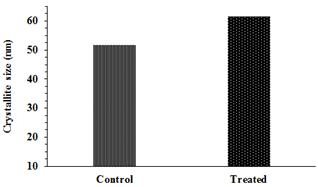 It is assumed that biofield energy might induce some internal strain in the treated molecules and resulted in the re-orientation of neighboring planes, which is also called as atomic displacement [22, 23]. This might lead to increase the crystallite size in the treated sample.

The TGA-DTG thermogram of SFRE-M samples (control and treated) are shown in Fig. 3 and data are presented in Table 3.

DSC analysis was performed to determine the melting temperature and latent heat of fusion (ΔH) of control and treated TPP samples. A substantial amount of interaction force is present in the atomic bonds of any substance that hold the atoms at their positions. The energy required to overcome the interaction force of phase change i.e. solid into liquid, is called as the ΔH. DSC thermogram (Fig. 4) of SFRE-M showed the melting temperature at 145ºC in control and 149.83ºC in treated sample (Table 2).

The result showed about 2.79% increase in the melting temperature of the treated sample of SFRE-M as compared to the control. Moreover, the DSC thermogram exhibited the latent heat of fusion i.e. 44.79 J/g in control and 72.82 J/g in the treated sample of SFRE-M. The result showed about 62.58% increase in the latent heat of fusion of treated sample with respect to the control sample. This might be due to increase in intermolecular force in the treated SFRE-M with respect to the control. As a result, the treated SFRE-M sample probably required more energy (ΔH) to change the phase from solid to liquid as compared to the control. Formerly, our group has reported that biofield energy treatment caused the changes in ΔH in lead and tin powders [27]. Therefore, it is supposed that biofield treatment might alter the intermolecular interaction forces of treated SFRE-M molecules, which may lead to alteration in latent heat of fusion. 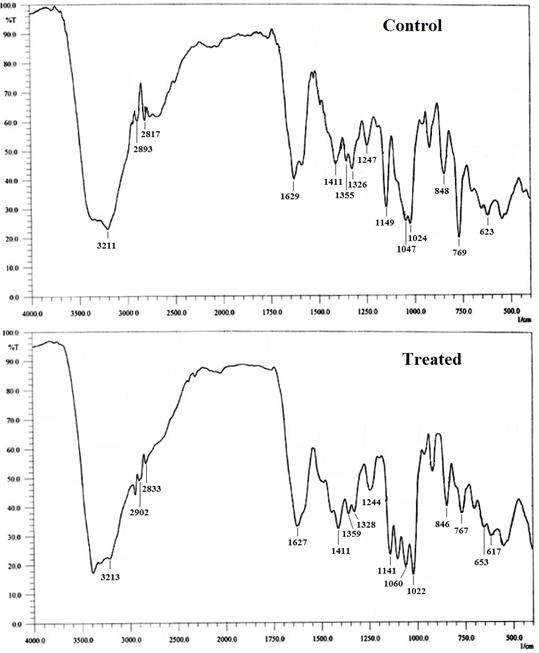 At the constant μ, the frequency is directly proportional the force constant [29]. Based on this, it is presumed that force constant of some bond such as C-H and C-N might increase in the treated sample, which might lead to increase in the stability of treated molecules with respect to the control. The thermal stability data was also support the increased stability of treated SFRE-M with respect to the control.

Overall, the data suggest that Mr. Trivedi’s biofield energy treatment exhibited the significant impact on the physical, thermal and spectral properties of SFRE-M. Based on this, it is presumed that Mr. Trivedi’s biofield energy treatment can modulate the physicochemical properties of SFRE-M so that it could be utilized as a better medium for the cell culture of primary mammalian cell in vitro.

The authors would like to thank the Trivedi Master Wellness, Trivedi Science, and Trivedi Testimonials for their sturdy support during this study. Authors would also like to acknowledge the whole team of MGV pharmacy college, Nashik for the instrumental facility, used in this work.