Plants have been identified and used throughout human history. Plants have the ability to synthesize a wide variety of chemical compounds as part of their normal metabolic activities, these compounds are used to perform important biological functions, and to defend against attack from predators such as insects, fungi and herbivorous mammals [1]. Phytochemicals are large group of plant derived compounds hypothesize to be responsible for much of the disease protection conferred from diets. These phytochemicals are divided into primary metabolites such as sugars and fats, which are found in all plants; and secondary metabolites; compounds which are found in a smaller range of plants, serving a more specific function [2].

Tyrosinase (EC 1.14.18.1) is a copper-containing enzyme present in plant and animal tissues that catalyzes the production of melanin and other pigments from tyrosine by oxidation [3, 4]. Tyrosinase is found inside melanosomes it is encoded by the TYR gene [5]. It is mainly involved in two distinct reactions of melanin synthesis (melanogenesis); firstly, the hydroxylation of a monophenol and secondly, the conversion of an o-diphenol to the corresponding o-quinone. O-Quinone then undergoes several reactions to eventually form melanin [6]. Hence, the pigmentation, spots, freckles, found on the skin are generally considered to be caused as a result of the melanin production enhanced by the activated melanocyte present in the skin due to the stimulation from skin exposure to ultraviolet ray, hormonal imbalance and genetic factors.

Traditional herbal medicines provide an interesting, largely unexplored source for development of potential new drugs. The potential use of traditional herbal medicines for development of new skin-care cosmetics has been emphasized recently [7]. It is of great interest to know whether preparations used cosmetically in folk medicines have activities that might be useful in modern formulations. The aim of this study is to screen for the tyrosinase inhibitory activity of the methanol, acetone and dichloromethane extracts of Cam wood dye. Commercially available tyrosinase inhibitors are mainly chemical and fungal derived skin-lightening agents that have been proven to have chronic mutagenic and cytotoxic effects on humans [8]. Therefore evaluation and identification of tyrosinase inhibitors with potent activities and lower side effects from natural products would be the safest alternative possible.

The Cam wood dye was gotten from Idanre town, Ondo state alongside other parts of the tree plant for authentication. Thereafter 5g of sample was dissolved in 25 ml of the three solvents considered; that is methanol (MeOH), acetone and dichloromethane (DCM). They were incubated at 50°C with continuous agitation for 5 hours in a shaking-water bath. The solvent were removed and replaced with an equal volume of solvent and the procedure repeated two more times. The extracts obtained were filtered using whatmann filter paper while the clear filtrate was placed in fume cupboard for solvents to evaporate and in obtaining dry extracts.

Qualitative analysis of the crude extracts was carried out as described previously [9, 10, 11, 12, 13, 14] to identify the presence of secondary metabolites (alkaloids, anthraquinones, flavonoids, tannins, saponins, phenol, glycosides, cardiac glycosides and steroids). The detail procedures involved in the phytochemical screening are as described by Ushie and Adamu [15].

Extracts/purified compounds were dissolved in dimethyl sulfoxide (DMSO) to a final concentration of 20 mg/ml. This extract stock solution was then diluted to 600 μg/ml in 50 mM potassium phosphate buffer (pH 6.5). Kojic acid were used as positive controls. 700 μl of each sample solution of different concentrations (3.1–400 μg/ml) were combined with 300 μl of tyrosinase (50 Units/ml in phosphate buffer, pH 6.5) in triplicate inside test-tubes. After incubation at room temperature for 5min, 1.1 ml of substrate (12mM L-DOPA) were added to each well. Final concentrations of the extract were 3.1, 6.2, 12.5, 25, 50, 100, 200 and 400 μg/ml. Final concentrations of pure compound and positive control were 1.5, 3.1, 6.2, 12.5, 25, 50, 100 and 200 μg/ml. Test-tubes were incubated for 30 min at room temperature, after which optical densities of the test mixtures were then determined at 492 nm using visible spectrophotometer.

The percentage tyrosinase inhibition was calculated as follows:

A1= Acontrol i.e. Abs of test with L-DOPA but no sample

A2= Blank i.e. Abs of test with no sample or L-DOPA

A3= Asample i.e. Abs of test with sample and L-DOPA

The extent of inhibition by the addition of the sample was expressed as the percentage inhibition and the initial velocity was plotted against substrate concentration.

The inhibition mechanism of different concentrations (25 µg/ml, 50 µg/ml, 100µg/ml, 200 µg/ml and 400 µg/ml) plant extracts on enzyme activity to plot their activity against effectors concentration. 0.1 ml of the different concentration of extracts were mixed with 2.8 ml of reaction solution (consisting of 12 mM L-DOPA in 50 mM sodium phosphate buffer, pH 6.5). Then, a portion of 100 µl of enzyme solution was added into this mixture and we determined the residual activity at 30°C. In the activity assay system, substrates concentration (2.5, 5.0, 7.5, 10.0, 12.0) mM was changed to determine the enzymatic oxidation initial velocity. According to Michaelis-Menten kinetics, plots of Lineweaver-Burk were made to estimate the kinetic parameters (Km and Vmax).

Phytochemical screening of acetone extract of Cam wood dye as observed from Table 1 showed the presence of phlobatannins, while the dichloromethane extract has phlobatannins and cardiac glycosides. This Cardiac glycosides present in the dichloromethane extract of Cam wood dye might make the plant useful therapeutically primarily in the treatment of cardiac failure. The methanol extract contains total flavonoids and a minute presence of phlobatannins, as compared with some other plants like strawberries, apples, onions, almonds, etc. that contains flavonoids [16]. Some of the phytochemicals that are present in this dye may have compounds similar to some already known tyrosinase inhibitors as previously [17]; examples include hydroquinone which contains flavonoids and arbutin which also are made up of glucosides. Hence this can contribute to the dyes extract tyrosinase inhibitory properties.

Under the conditions employed in this present investigation, the oxidation reaction of L-DOPA by mushroom tyrosinase followed Michaelis-Menten kinetics. 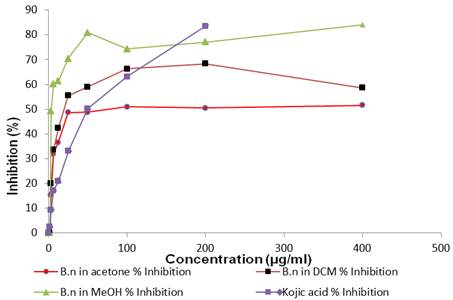 Kojic acid at the concentration of 200 µg/ml has its highest anti-tyrosinase activity (83.48%) when compared with the three extracts of Cam wood dye, however acetone, dichloromethane and methanol extract has 50%, 68% and 77% respectively at thesame inhibitor concentration. The methanolic extract has the highest inhibitory activity at 200µg/ml of 77.12%, however, this makes it the closest to the inhibitory activity of kojic acid (83.43%). 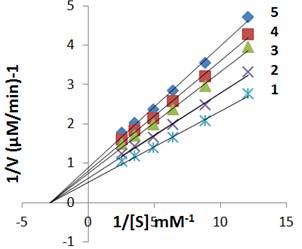 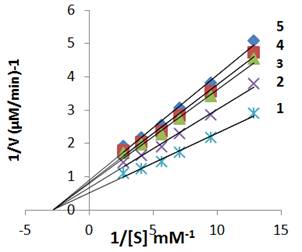 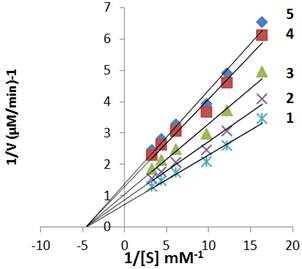 Figure 2. Lineweaver-Burk for the inhibitionn of Cam wood dye (a) acetone extract (b) dichloromethane extract (c) methanol extract on the oxidation of L-DOPA by mushroom tyrosinase with concentration of extract shown in curves 1 – 5 being 2.5 mM, 5 mM, 7.5 mM, 10mM and 12 mM.

Cam wood dye extract showed Noncompetitive Inhibitory type on the Diphenolase Activity as shown in figure 2 for acetone (a), dichloromethane (b) and methanol (c) extract respectively; the Lineweaver-Burk plots of 1/ν versus 1/[S] give a family of lines with different slope and intersect one another on the X-axis, indicating that all the Cam wood dye extract were a noncompetitive inhibitor of diphenolase [19]. This inhibitor binds to another site on the enzyme and inactivates the enzyme molecule. This effectively reduces the [E]tot available for catalysis. Since Vmax is proportional to [E]tot, Vmax is reduced. While the remaining active enzyme molecules are unaltered, Km is unchanged. 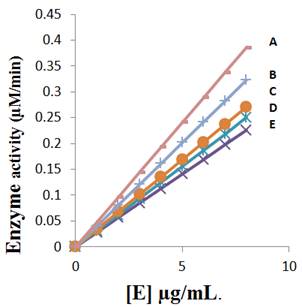 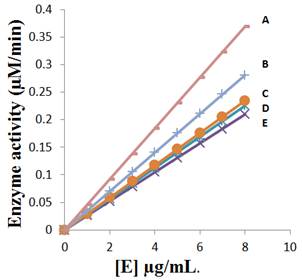 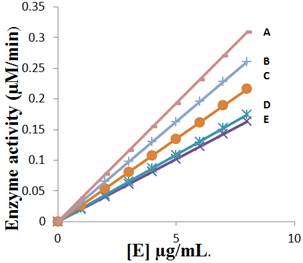 Cam wood dye extract was also used as an effector on the activity of mushroom tyrosinase for the oxidation of L-DOPA as seen in figure 3. The plots of the remaining enzyme activity versus the concentrations of enzyme in the presence of different concentrations of Cam wood dye extracts gave a family of straight lines, which all passed through the origin, indicating that that inhibition of these extracts on the diphenolase had the slope of the lines markedly increased with increasing concentration of all the extracts hence depicting an irreversible reaction course. The presence of Cam wood dye extract did not bring down the amount of the efficient enzyme, but just resulted in the descending of the activity of the enzyme [20].

Table 2. The kinetic parameters of mushroom tyrosinase for the oxidation of L-DOPA.

The findings in this study provides scientific basis to promote value-adding of Cam wood dye for pharmaceutical and cosmetic purposes, because of the strong anti-tyrosinase activities of its methanolic extracts.