DC motors are widely used in industrial applications, robot manipulators and home appliances, because of their high reliability, flexibility and low cost, where speed and position control of motor are required. This paper deals with the performance evaluation of different types of conventional controllers and intelligent controller implemented with a clear objective to control the speed of separately excited DC motor.

PID controllers are commonly used for motor control applications because of their simple structures and intuitionally comprehensible control algorithms. Controller parameters are generally tuned using Ziegler-Nichols frequency response method [1]. Ziegler-Nichols frequency response method is usually used to adjust the parameters of the PID controllers. However, it is needed to get the system into the oscillation mode to realize the tuning procedure. But it’s not always possible to get most of the technological plants into oscillation [2].

In process control, model based control systems are mainly used to get the desired set points and reject small external disturbances. The internal model control (IMC) design is based on the fact that control system contains some representation of the process to be controlled then a perfect control can be achieved. So, if the control architecture has been developed based on the exact model of the process then perfect control is mathematically possible [3].

Fuzzy logic control (FLC) is one of the most successful applications of fuzzy set theory, introduced by L.A Zadeh in 1973 and applied (Mamdani 1974) in an attempt to control system that are structurally difficult to model. Since then, FLC has been an extremely active and fruitful research area with many industrial applications reported [4]. In the last three decades, FLC has evolved as an alternative or complementary to the conventional control strategies in various engineering areas.

Analysis and control of complex, nonlinear and/or time-varying systems is a challenging task using conventional methods because of uncertainties. Fuzzy set theory [5] which led to a new control method called Fuzzy Control which is able to cope with system uncertainties. One of the most important advantages of fuzzy control is that it can be successfully applied to control nonlinear complex systems using an operator experiences or control engineering knowledge without any mathematical model of the plant [6].

The armature voltage equation is given by:

Equation for back emf of motor will be

Now the torque balance equation will be given by:

Let us combine the upper equations together:

Then the relation between rotor shaft speed and applied armature voltage is represented by transfer function:

This is the transfer function of the DC motor.

Consider the following values for the physical parameters [7,8]

Based on the data book, the transfer function is as

PID controllers are probably the most widely used industrial controller. In PID controller Proportional (P) control is not able to remove steady state error or offset error in step response. This offset can be eliminated by Integral (I) control action. Integral control removes offset, but may lead to oscillatory response of slowly decreasing amplitude or even increasing amplitude, both of which are error, initiates an early correction action and tends to increase stability of system.

Ideal PID controller in continuous time is given as

Ziegler and Nichols proposed rules for determining values of

based on the transient response characteristics of a given plant. Closed loop oscillation based PID tuning method is a popular method of tuning PID controller. In this kind of tuning method, a critical gain

is induced in the forward path of the control system. The high value of the gain takes the system to the verge of instability. It creates oscillation and from the oscillations, the value of frequency and time are calculated. Table 1 gives experimental tuning rules based on closed loop oscillation method [2,9].

From the Closed loop oscillation method,

Usually, initial design values of PID controller obtained by all means needs to be adjusted repeatedly through computer simulations until the closed loop system performs or compromises as desired. These adjustments are done in MATLAB simulation.

The theory of IMC states that "control can be achieved only if the control system encapsulates, either implicitly or explicitly, some representation of the process to be controlled".

has been used to control the process

is a model of

the model is an exact representation of process, then it is clear that the output will always equal to set point. Notice that this ideal control performance is achieved without feedback.

Designed the IMC controller as

is a low pass function defined as

A good rule of thumb is to choose λ to be twice fast as open loop response.

The fuzzy controllers are designed with two input variables, error and change of error and one output variable. The Mamdani based fuzzy inference system uses linear membership function for both inputs and outputs [11]. For the fuzzy logic controller the input variables are error

and rate (change) of error

, and the output variable is controller output

. Triangular membership functions are used for input variables and the output variable. Each variable has 7 membership functions. Thus, there were total 49 rules generated. The universe of discourse of error, rate of error and output are [120,120], [120,120] and [180,180] respectively. The rule base framed for DC motor is tabulated in Table 3[12].

The structure of the rule base provides negative feedback control in order to maintain stability under any condition. Linguistic variables for error, rate of error and controller output are tabulated in table 2[13].

The simulations for different control mechanism discussed above were carried out in Simulink in MATLAB and simulation results have been obtained. 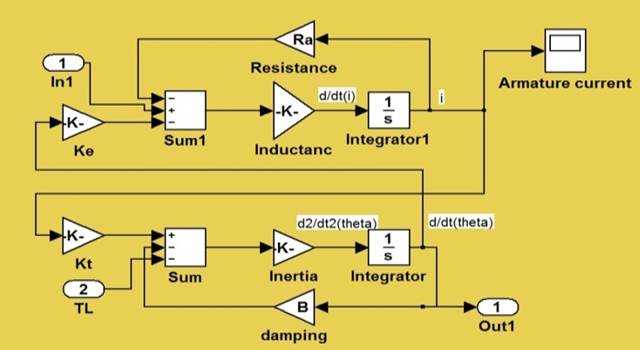 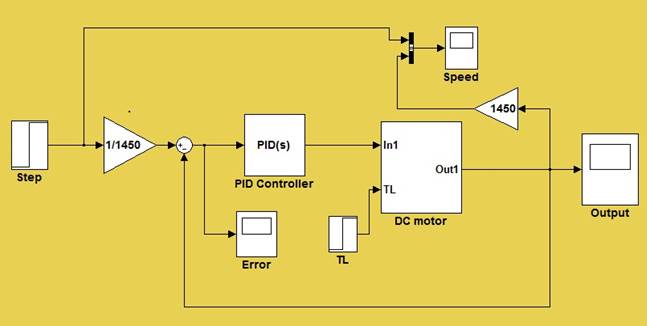 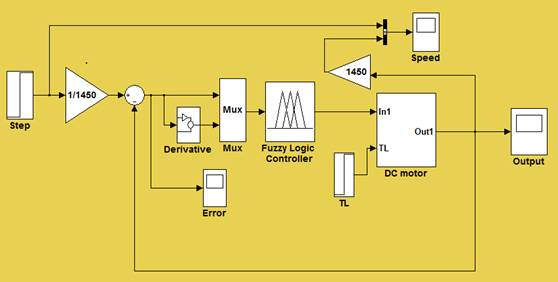 To evaluate the performance of the different controllers, the maximum overshoot, the settling time and the rise time of step response has been analyzed.

Hence it is concluded that the proposed Fuzzy Logic Controller provides better performance characteristics and improve the control of DC motor.