Abstract: In this article, we use a Chebyshev spectral-collocation method to solve the Volterra integral equations with vanishing delay. Then a rigorous error analysis provided by the proposed method shows that the numerical error decay exponentially in the infinity norm and in the Chebyshev weighted Hilbert space norm. Numerical results are presented, which confirm the theoretical predicition of the exponential rate of convergence.

The Volterra integral equations with the vanishing delay are defined as

For ease of analysis, we will transfer the integral interval

3.1. The Changes of Variables

Firstly, we use the changes of variables

Now we assume that

Gauss quadrature formula, we can obtain that

to approximate the function value

to approximate the function

The Chebyshev spectral-collocation method is to seek

satisfies the above equation.

3.4. Implementation of the Spectral Collocation Algorithm

(6) can be written in matrix form:

We now discuss an efficient computation of

is called the discrete polynomial coefficients of

is the weight corresponding to

For simplicity, we denote

with the norm as

For a nonnegative integer

is the Banach space of the measurable functions

that is bounded outside a set of measure zero, equipped the norm

is the space of all polynomials of degree not exceeding

is the interpolation operater associated with the

, then there exists a constant

Lagrange interpolation polynomials associated with the

is a integrable function, then there exists a constant

is a non-negative integrable function and satisfies

is also a non-negative integrable function, then

Lemma 6. [9] For all measurable function

holds if and only if

is an operator of the form

Lemma 7. [10] For every bounded function

, there exists a constant

is the exact solution to (3) and

is the approximate solution obtained by using the spectral collocation schemes (6). Then for

sufficiently large, there is

According to Lemma 1 with

This completes the proof of this theorem.

is the approximate solution obtained by using the spectral collocation schemes (6). Then for

sufficiently large, we have

Proof. Applying Lemma 5, it follows from (15) that

With Lemma 7, we get

As the same analysis in (21), we obtain that

From Theorem 1, we get

This completes the proof of this Theorem.

The corresponding exact solution is

We use the numerical scheme (6).Numerical errors versus several values of

are displayed in Table 1 and Figure ①. These results indicate that the desired spectral accuracy is obtained. Figure ② presents the approximate solution (

) and the exact solution, which are found in excellent agreement.

versus the number of collocation points in 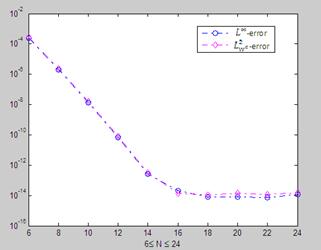 versus the number of collocation points in 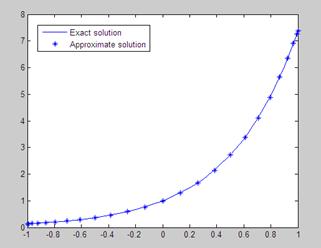 and the exact solution

The corresponding exact solution is

Figure ③ plots the errors for

) and the exact solution are displayed in Table 2. As expected, the errors decay exponentially which confirmed our theoretical predictions.

Table 2. The errors versus the number of collocation points in 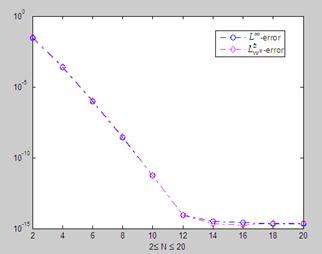 Figure 3. Plots the errors for 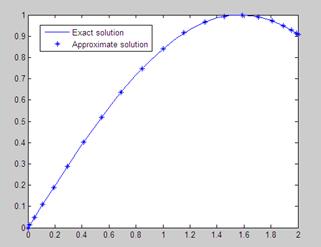 ) and the exact solution.

We successfully solve the Volterra integral equation with vanishing delay by Chebyshev spectral-collocation method and provide a rigorous error analysis for this method. We get the conclusion that the error of the approximate solution decay exponentially in

norm. We also carry out the numerical experiment which confirm the theoretical predicition of the exponential rate of convergence.