Abstract: Finite Difference Method and Radial Basis Functions are applied to solve partial integro-differential equations with a weakly singular kernel. The product trapezoidal method is used to compute singular integrals that appear in the discretization process. Different RBFs are implemented and satisfactory results are shown the ability and the usefulness of the proposed method.

Mathematical modeling of some scientific and engineering problems lead to partial integro-differential equations (PIDEs). In this paper, the following PIDE, with a weakly singular kernel is considered.

, and is subject to the following boundary and initial conditions:

This type of integro-differential equations appears in some phenomena such as heat conduction in materials with memory [12,22], population dynamics, and viscoelasticity [25,6]. The numerical solution of PIDEs is considered by many authors [1,2,19,20,23,27,30].

In recent years, meshless methods, as a class of numerical methods, are used for solving functional equations. Meshless methods just use a scattered set of collocation points, regardless any relationship between the collocation points. This property is the main advantage of these techniques in comparison with the mesh dependent methods, such as finite difference and finite element. Since 1990, radial basis function methods (RBF) [13] are used as a well-known family of meshless methods to approximate the solutions of various types of linear and nonlinear functional equations, such as Partial Differential Equations (PDEs), Ordinary Differential Equations (ODEs), Integral Equations (IEs), and Integro-Differential Equations (IDEs) [7,8,11,13,16,18,24]. In the present work, for the first time derivatives, we use the Finite Difference (FD) scheme to discretize the equation which it makes a system of partial integro-differential equations. Then we use radial basis functions (RBFs) to solve this system. Recently FD-RBF method is used to solve some problems like nonlinear parabolic-type Volterra partial integro-differential equations [1], fractional-diffusion inverse heat conduction problems [33], and wave equation with an integral condition [34].

In this paper, FD-RBF methods are applied for numerical solution of PIDEs with a weakly singular kernel. Singular integrals, which appear in the method, are computed by the product trapezoidal integration rule.

The paper is organized as follows. In Section 2, the RBFs are introduced. Section 3, as the main part, is devoted to solving weakly singular PIDEs, by finite difference and RBFs. An illustrative example is included in Section 4. A conclusion is presented in Section 5.

Interpolation of a function

by RBF can be presented as the following [4]

is a fixed univariate function, the coefficients

is a set of interpolation points in

is the Euclidean norm.

. One can use interpolation conditions to find

Some well-known RBFs are listed in Table 1, where the Euclidian distance

is real and non-negative, and

is a positive scalar, called the shape parameter.

Also the generalized Thin Plate Splines (TPS) are defined as the following:

of degree at most

is the dimension of the linear space

of polynomials of total degree less than or equal to

Collocation method is used to determinate the coefficients

additional equations is usually written in the following form

In this section we explain the process of solving PIDEs, with a weakly singular kernel, in the following form

, with the following boundary and initial conditions

At first we introduce grid points

is an integer, and

As the finite difference technique, we have

. By using the notation

We now use the product trapezoidal integration technique, well addressed in [9], to approximate the integrals

for i=1,…m-1. Let’s approximate the function

is an unknown vector.

leads to the following system

Two additional conditions, as mentioned in section 2, can be written as

By two times differentiation from Eq. (14), with respect to

. So, we consider collocation points,

to obtain the entries of the vectors of the coefficients

As the first step we must determine

can be obtained by the initial condition

The convergence of RBF interpolation has been addressed by Buhmann [3,4], and other researchers [15,26,29].

In this section, an example is provided to illustrate the efficiency of this approach. For the sake of comparison purposes, we use the two norm and infinity norm of errors.

with the boundary and initial conditions

The exact solution is

Errors of the numerical solutions for TPS-RBF (

Three different RBFs are implemented in a FD method for solving a PIDE with a weakly singular kernel successfully. The results of applying the method on the illustrative example confirm the ability and the usefulness of the proposed app−roach. In comparison with those results reported in [21,28], this method achieved more accurate results with less data grid points. 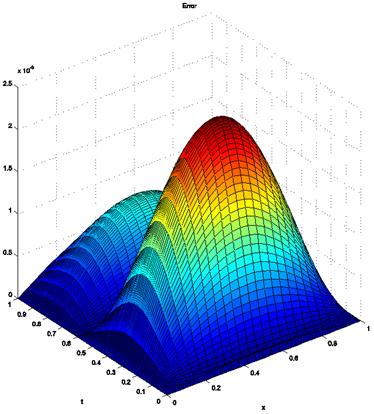 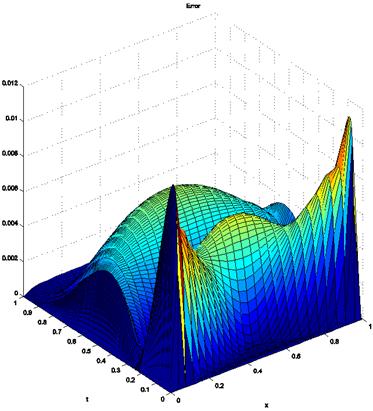 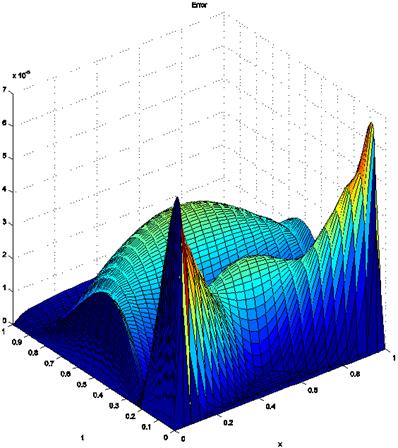