A diagrid [1,2,3] is formed by intersecting diagonal and horizontal components. This innovation transfers both gravity loads and lateral loads by redirecting member forces, and eliminates the need for vertical mega columns on the exterior of the building. Architecturally the absence of columns in the corners of the building enables great panoramic views and extends the useful space from the interior. The new structural system [4,5] consists of a DIAGRID perimeter, which is composed of a network of multi-story tall triangulated truss systems. The first detailed structural analysis of DIAGRID was performed in 1932 [6], and the system was first introduced in the United States in Chicago’s John Hancock Center [7], which was completed in 1969.

A specific design detail of DIAGRID structural systems was applied to the Cyclone Tower in Korea. It was considered by many engineers and designers to be an ideal DIAGRID due to its simplicity, as shown in Fig. 1. Nevertheless, the DIAGRID detail has various problems, including the interference of extended cap plates and stress concentrations at the end of tubes, and these have to be resolved.

In this study, a modified version of the original DIAGRID [11,14] is considered as DIAGRID locked in X-shape tube of HSA800 steel without considering the interference of extended cap plates. One of the more recent developments of steels [12,13] for construction is really a trend of developments given the term high performance. High performance steel materials provide far greater strength, ductility, durability, and resistance to external elements than traditional construction steels, and can significantly increase the longevity of structures in the built environment and can also reduce maintenance costs for these structures considerably.

High performance does not mean merely higher strength, but rather the improved performance of a number of varied factors of steels. For example, welding is used in most construction fabrication and therefore weldability is a significant factor. Many of the new construction steels ease the need for these precautions by producing high quality welds faster with less effort, with less consideration for pre-heat and post-heat and with less concern about internal cracking like lamellar tearing. Ductility is an ability that permits steel to elongate without fracture. Most of all strength is one of the key factors of high performance steels. Increased strength equates to reduced quantities of steel within limits of a given deformation, which may lead to reduced construction cost.

The high performance steels appeal to an optimal combination of improved features that more than make up for their higher specific cost. They provide opportunities to reduce the finished construction cost by lowering fabrication cost and, by reducing steel weight, the costs of shipping and erection. Much of the early research in these products was done for military use, which requires more functions rather than cost. Adapting this technology to building construction applications, along with essentially reducing material costs, gives an impulse to further develop steels.

This study is divided into 3 Sections. In Section 2 structural behaviors of innovative improved DIAGRID details are verified by numerical examples through structural analyses, using the ABAQUS commercial software package. The conclusions are presented in Section 3.

The test specimens of DIAGRID structures are defined in Table 1. In 2012, POSCO and RIST (Korea) developed a new high-performance rolled steel plate with 800MPa grade tensile strength for building structures called, HSA800. This Steel has upper and lower bounds for yield and ultimate tensile strength of 650~770MPa and 800~950 MPa, respectively. It was verified through material tests [9] and Korea Standard D 5994 [10].

Figure 2. Details of a modified DIAGRD and numerical modeling. 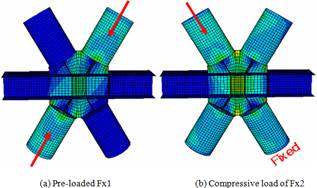 The current nominal value of 650 and 800 in Table 1 is the lowest value of the actual values. I considered the worst-case scenario for safety.

Figure 4 shows the load-displacement curves of a modified X-shape DIAGRID. As can be seen, a higher slope of the curve indicates better stiffness and a lower slope means better ductility. In all cases of HSA800 and SS400, the great thickness of tube and plate produces the best stiffness, but the worst ductility in case of high strength steel of HSA800. From these results, it can be found that a thickness of tube and plate improves initial stiffness and the low strength steel of SS400 improves ductility in general.

Figure 5 describes the improvement of stiffness and ductility in a X-shape DIAGRID according to applying convex and concave DIAGRID [11]. In particular, compared with the existing flat DIAGRID controlling thickness and extension length of cap plates, it is verified that the convex DIAGRID in use of HSA800 steel is the best solution. 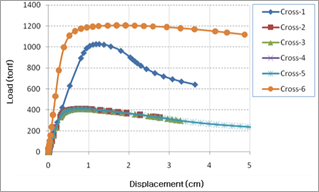 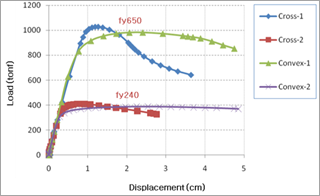 Furthermore, a composite type of convex and concave forms, i.e., a ball type, may be proposed to obtain the best stiffness and ductility.

Figure 7 shows collapsed views of a X-shape DIAGRID using SS400 steel. The results are similar to those of Fig. 6.

In this article, a convex DIAGRID with high strength steel, HSA800 is evaluated as being an improvement on the current best solution, i.e., flat shaped DIAGRID, and the structural and economic superiority of the convex DIAGRID is verified using the ABAQUS commercial software package for nonlinear static pushover analysis.

This research was supported by the 2013R1A1A2057502 from the National Research Foundation of Korea (NRF) funded by the Korea government.