Modeling the Effect of Human Mobility on Dengue Transmission

Abstract: Dengue is one of the most prevalent viruses transmitted by mosquitoes where increasing incidence and severity claim severe social burden. This virus is common throughout the tropics and subtropics. Dengue is a virus which propagated during the day and thus the mobility of humans can cause it to spread quickly. In this paper, we introduce mobility of humans between two neighboring areas into a mathematical model for the transmission of dengue. Dengue transmission is modeled using the classical SIR model. Simulations have been carried under four cases to compare the impact of human mobility to propagate the dengue disease. These cases are based on existence of dengue and human mobility direction regarding neighboring area. Numerical simulations are carried out using Matlab routine ode 45.

Dengue fever is reported throughout the nineteenth and early twentieth centuries in the America, Southern Europe, North Africa, the eastern Mediterranean, Asia, Australia, and on various islands in the Indian Ocean, the south, central Pacific and the Caribbean. It is named in 1779 and the first recorded epidemics is occurred in Asia, Africa and North America in the 1780s [12]. It is caused by family of viruses that is transmitted by Aedes Aegypti mosquitoes. This disease is classified into three forms; dengue fever (DF), dengue hemorrhagic fever (DHF) and dengue shock syndrome (DSS). DF is a flu-like illness that affects infants, young children and adults, but seldom causes death. DHF is more severe and associated with loss of appetite, vomiting, high fever, headache and abdominal pain. During dengue epidemics in the Philippines and Thailand, DHF is first identified in the 1950s [13]. The dengue flavivirus occurs in four different serotypes, namely DEN-1, DEN-2, DEN-3 and DEN-4. Contracting one form of dengue fever provides lifelong immunity from that serotype, but not from the other serotypes. When a female Aedes mosquito bites a person infected with dengue, the virus incubates in the insect's body for 8-11 days, after which the mosquito can spread the disease to other humans for the remainder of the insect's life span which is between 15 and 65 days [1,3].

Dengue is currently the most prevalent mosquito-borne viral disease affecting humans with 50-100 million estimated cases of dengue fever and 250,000 to 500,000 cases of the more severe dengue hemorrhagic fever/dengue shock syndrome each year, with about 20,000 deaths [5]. The World Health Organization estimates that 3.9 billion people in 128 countries are at risk for dengue [13]. During the past few years, the characteristics of dengue in Sri Lanka appear to have changed [18]. For instance, a decade ago, children were predominantly affected, but in recent years, increasing numbers of adult dengue patients have been seen, with both significant morbidity and increasing number of adult deaths due to dengue. Therefore, it is very important to investigate, how this virus spreads while considering their age, gender and other demographic factors.

Mosquitoes carrying dengue typically bite during the daytime, particularly around sunrise and sunset. During the daytime there is high mobility of human because humans move for work, school, shopping and general needs. Since dengue mosquitoes usually only fly short distances (50-200m) mosquito mobility does not make a significant influence to spread of dengue in between regions/cities. However, human mobility plays a vital role in the spread of dengue fever in inter region. This paper is an attempt to investigate and model the impact of human mobility to spread of dengue in two neighboring cities or regions.

Even though vector (mosquito)-transmitted diseases have been around for centuries, we are still trying to determine mathematical models and identify control measure for many of these diseases. History of using epidemiological model goes 1760. The great mathematician, Daniel Bernoulli, formulated epidemiological model with the aim of evaluating the impact of variolation on human life expectancy [6]. In 1927, Kermack and Mckendrick introduced the threshold theorem, which is one of the key concepts in epidemiology [6].

Modeling the spread of Dengue with ordinary differential equations began in the early 1990s. In [8], the authors look at modeling two specific outbreaks of dengue in South America, one with control of the vectors and one without. Santos et al [9] use a cellular automata approach to model the dynamics of dengue spread. In [10], a differential equation model for dengue with susceptible, exposed, and infected mosquitoes and humans are presented. These models are the basis of most of developed models by adding further; many additional factors such as climate, breeding conditions, locality and etc. In [11], the authors introduce a partial differential equation with aquatic, susceptible, and infectious mosquitoes with spatial diffusion considered only in a small locality, no large scale spread of humans is considered in this model. Cross Wavelet power spectrum and Cohency analysis are performed identify dengue spread among Colombo city and neighbouring cities [14]. In [16], the two patch system are developed to identify the movement of human mobility in between two patches. In [17], a conceptual model to evaluate the importance of variation in exposure due to individual human movement for pathogen transmission, focusing on mosquito-borne dengue virus.

In this paper, we present a mathematical model for the transmission of dengue which considers the mobility of the human population between two neighboring regions.

The birth and death for the human population are omitted. The human population is divided into three classes namely, susceptible, infected, and recovered. A susceptible human is the person who is not immune and not infected [1]. An infected human is the person who is got dengue virus from the infected vector [3]. While, a recovered person is the infected person after the viremia stage until after they recovered from dengue virus infection [3]. The vector population is divided into two classes as susceptible and infected. Since life time of the vector population is very low compared to human life time, recovered class of vectors is not considered. In addition, no incubation period is incorporated into this model.

be the number of susceptible humans in region

be the number of infected humans in region

be the number of removed humans in

be the number of susceptible mosquitoes in region

be the number of infected mosquitoes in region

be the number of susceptible humans in region

be the number of infected humans in region

be the number of removed humans in

be the number of susceptible mosquitoes in region

be the number of infected mosquitoes region

at time t. The transmission models of dengue with human mobility between two neighboring regions are described by system of differential equations. System (1-5) describes the dynamics of dengue in region

denote the mobility of susceptible human from region

and the mobility of susceptible human from region

denote the rate of the mobility from region

of susceptible, infected and recovered individuals respectively. In addition, let

denote the rate of the mobility from region

denote the bitting rate of the vector population in region

and the transmission probability from vector to human in region

. Members of the human population in the region

that recover their health after infected are

. The mobility of infected human from region

and the mobility of infected human from region

. The mobility of recovered human from region

and the mobility of recovered human from region

. Birth of the mosquito to the susceptible compartment is

. The number of deaths among the susceptible mosquito population is

. Susceptible mosquito in region have the probability of being infected with dengue virus at a rate

denotes the transmission probability from human to vector in region

. System (6-10) also describes the dynamics of dengue in region

. Similary, this system also can be described as above. In system (6-10), let

denote bitting rate of the vector population in region

, transmission probability from vector to human in region

, recovery rate of humans in region

, transmission probability from human to vector in region

and birth/death rate in the vector population in region

. The systematic diagram for dengue transmission process is shown in Figure 1. 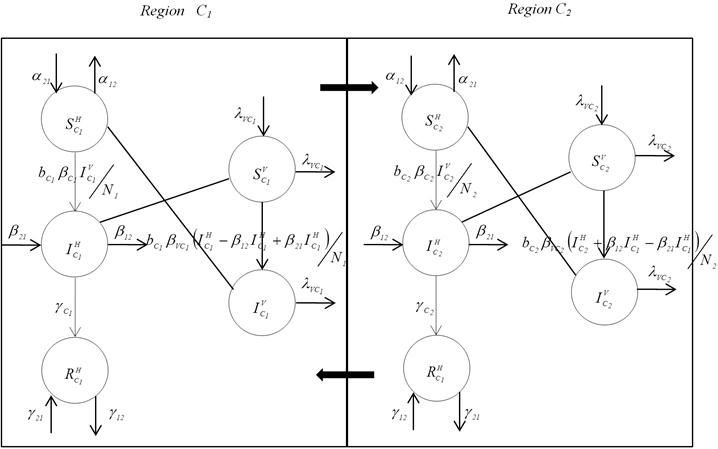 Figure 1. A Systematic diagram of model.

is the total human population in region

is the total human population in region

is the total human population of region

is the total mosquito population in region

is the total mosquito population in region

We assume, both human population of the two neighboring region and vector population are constant in both region. We normalize (1-5) and (6-10) by letting,

Table 1 summaries the parameters and their numerical values used in simulation [3,4].

This routine is an implementation of explicit Runge-Kutta (4, 5) pair.

Table 1. Parameter definition and values use in numerical simulation. 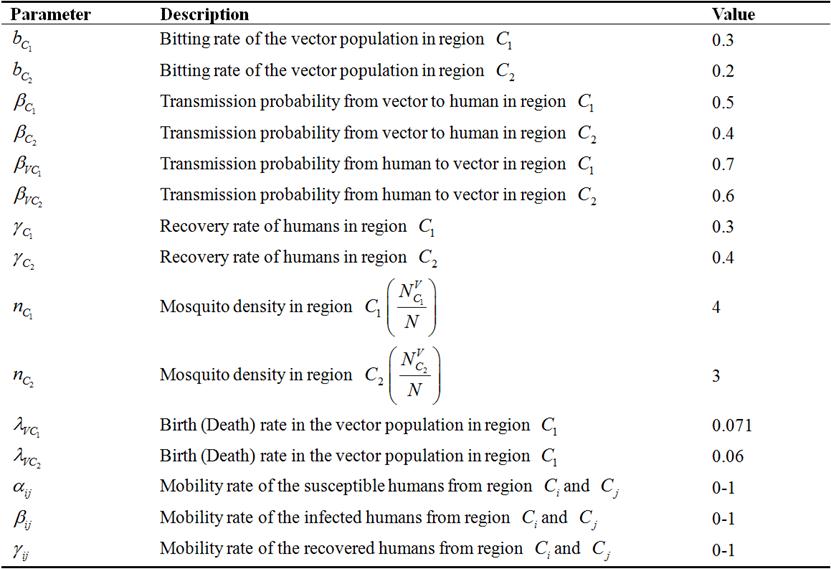 Dengue existing area and human mobility direction are main factors of this mathematical model. We begin by assuming that region

consists of dengue patients whereas region

is free of infected human under these conditions, we consider the effect of mobility from region

. Notice, in Figure 2, that during this time interval, the infected human proportion in region

(Figure 2h) and the susceptible mosquito proportion in region

(Figure 2e) decreases because the susceptible humans move to region

is free of dengue; however in this case humans are only moving from region

. Notice in Figure 3f that initially the infected human proportion increases in region

followed by an increase in the infected mosquito proportion in region

(Figure 3b) and infected mosquito proportion in area

(Figure 3c) increase to one. 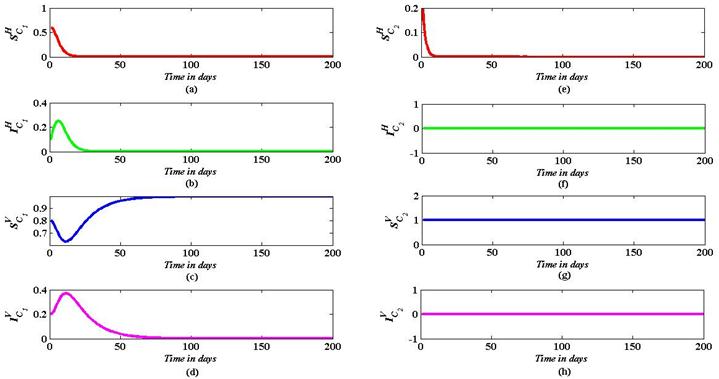 Figure 2. Dynamics of (a) Susceptible human in region 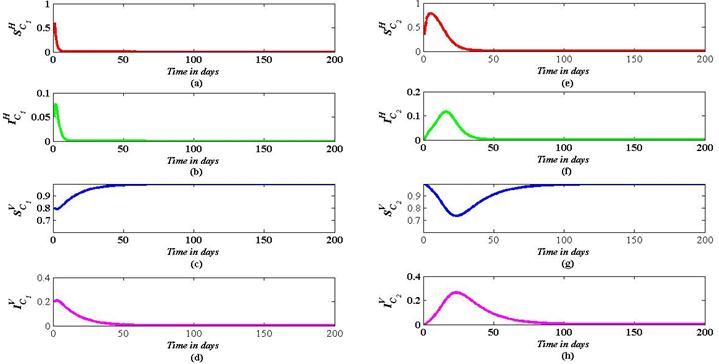 Figure 3. Dynamics of (a) Susceptible human in region

In the scenario present in Figure 4, initially only humans in region

may be infected with dengue; however the human population has mobility between regions

. Note that in this case the behavior of both the mosquito and human population in region

are similar where region

’s behaviors lag those in region

We explore the spread of dengue with both populations in regions

. These results can be seen in Figure 5. As in Figure 4, behavior of the mosquito and the human populations in both regions are similar with only the parameters affecting what happens initially. In Figure 4, parameter values of 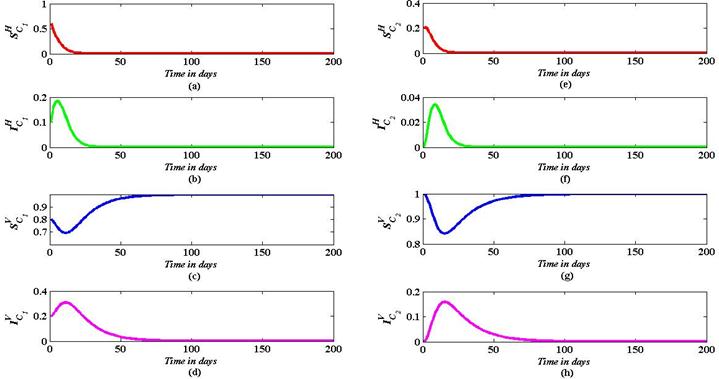 Figure 4. Dynamics of (a) Susceptible human in region 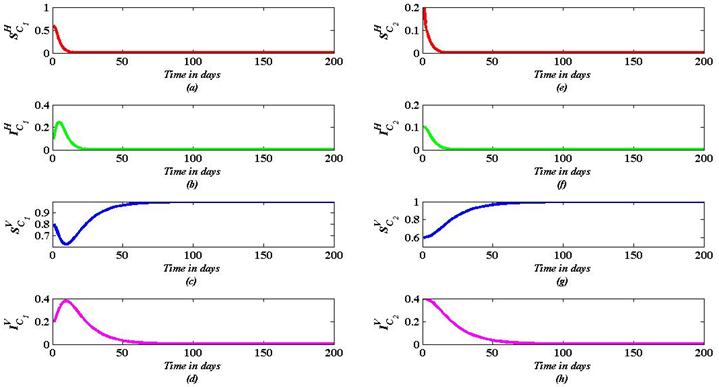 Figure 5. Dynamics of (a) Susceptible human in region

Impact of the human mobility to transmission of dengue disease between two neighboring regions is considered. Here, we consider two regions, namely region

. We study the impact of human mobility effect to dengue dynamics under four cases. In first three cases, we assume that region

is dengue existing area where region

is free from dengue. Initially human mobility exists from region

followed by the mobility from

and in the third case mobility exists from region

. In the final case, it is assumed that both the regions

are affected by the dengue disease and mobility then occurs from the both regions.

It is found that dengue disease can be propagated to disease free area if human mobility exists from dengue existing area to dengue free area. This model can be used to analyse risk of dengue transmission subject to human mobility. For example, according to the simulation we can observe that within 20 days, there is a high risk of dengue and within 50 days dengue disease dies out.

Particularly in large commercial cities, where the visiting population is large, we see that spread of dengue can be affected. Multiple localities and serotypes could complicate the epidemic problem even further. By adding other factors such as climate, socio economic ets can be model further extended.