Contents
1. Introduction 2. Materials and Methods 2.1. Experimental Locations 2.2. Collection of Landraces and Tuber Multiplication 2.3. Reciprocal Transfer of Tubers from Agroecology of Origin to Storage Locations 2.4. Data Collection and Analysis 3. Results 3.1. Temperature and Relative Humidity in the Yam Barns 3.2. Effects of Provenance and Storage Location on Duration from Planting to Sprouting and Storage to Sprouting 4. Discussion

Duration of dormancy is regulated by both endogenous and environmental mechanism(s) ([3], [4]). In yams, tuber dormancy is long (90 to 150 d) and variable. Variability in the duration of dormancy has been attributed to differences in species, variety, crop management, date of tuber harvest, growth, and storage environment ([5], [6]). Many studies have been conducted to understand the endogenous and environmental mechanism(s) that regulate the duration of yam dormancy. These studies have been successful at identifying the roles of endogenous plant growth regulators (PGRs) and storage temperature on dormancy. While it is clear that PGRs and temperature can affect dormancy, their effects have been minimal [7].

One aspect of environmental control of dormancy that has been poorly studied is the effect of provenance/adaptation on the duration of dormancy. A very early indication of a possible role of agroecology of origin on differences in duration of tuber dormancy was reported by Coursey, 1976 [8] and Passam, 1982 [6]. In Coursey, 1967 [10] tubers of D. elephantipes grown in semi-desert area were observed to exhibit dormancy that is as long as the dry period. Also, the work by Ile, 2004 [11] suggests that D. cayenensis that is found more in the high rainfall ecological zone (where the growing season is long and dry season is short) has a long growing period and tends to sprout slightly earlier than D. rotundata is found more in the moist savanna. However, this assertion has not been systematically studied. Within species differences in duration of dormancy is also common but the reason for this is unclear. We ask therefore, whether the duration of dormancy in D. rotundata is under some ecological control determined by adaptation to growing and storage condition. Therefore, the objectives of the study were to determine the effects of tuber provenance and storage agroecology on the duration to sprouting in D. rotundata.

Selected ecological characteristics of the above locations are presented in Table 1. The locations are different in altitude, annual total rainfall (total, duration and distribution pattern) and hence in the duration of the growing season. They are also different in annual mean relative humidity and less clearly in annual mean air temperature. However, the annual mean values for average minimum and maximum air temperatures indicate that night and day temperatures are about 1oC warmer and cooler respectively from the north (Abuja) to south (Onne). Abuja is distinctly less humid compared to Ibadan or Onne. Rainfall pattern at Abuja and Onne are similar with a peak in September. However, it is distributed over much of the year at Onne compared to Abuja, resulting in a longer growing season at Onne (approx. 300 d) than at Abuja (approx. 210 d). At Ibadan, rainfall peaks in June and again in September with a break in August and the duration of the rainy/ growing season is about 270 d 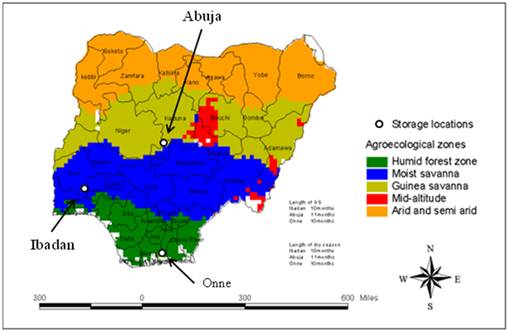 2.2. Collection of Landraces and Tuber Multiplication

2.3. Reciprocal Transfer of Tubers from Agroecology of Origin to Storage Locations

Two 99-8 (from the GS) and 99-22 (from the HF) out of the 22 landraces were not included in the sprouting/storage study, thus twenty landraces were used in this study. Tubers of each landrace were divided into three groups. Each third of the groups was stored at one of the three storage locations. These transfers were completed within five days of harvest and tubers are considered as being in their various growth agroecologies until they arrive at the storage location. Thus, at each storage location, there were 20 landraces replicated 100 times; there were 100 tubers/ landrace and each tuber was considered a replicate. Individual tubers were weighed, numbered and placed in open wooden or plastic boxes, and placed on shelves in the yam barn.

Temperature and relative humidity (RH) in the yam barns were recorded every 2 h using Tinytalk® (2 nos.) temperature and relative humidity sensors. These readings were taken in duplicate. Individual tubers were observed every 7 d for the appearance of shoot bud on the tuber surface (ASB or sprouting). The data analyzed was duration from harvest to sprouting/ASB. Data was analyzed as a complete 32 factorial experiment, consisting of three provenances (20 landraces nested in provenances) and three storage locations with individual tubers as replicates. SAS V8, GLM procedure was used to run this analysis.

3.1. Temperature and Relative Humidity in the Yam Barns

The yam belt of Nigeria, cuts across, from the North to the South, three distinct agro-ecological zones; Guinea savannah, Forest savannah transition and the Rainforest [12], which vary in latitude, rainfall pattern/start and duration of the rainy and dry seasons, solar radiation and photoperiod. This study followed a carefully planned method to determine whether the differences in duration to sprouting within the species of D. rotundata was caused by differences in tuber provenance and storage agroecology

This study is one study that evaluated the sprouting date of a very large number (over five thousand tubers) of D. rotundata tubers, and it was clear that the duration to sprouting which is an important indication of the duration of visible dormancy is highly plastic. This duration could be as long as < 311 d (as in this study) when considered as a duration from planting, between the months of April and early May, to sprouting or as short as < 74 d when considered as a duration from storage in mid-December to sprouting. Furthermore, the fact that a small (less than 6 d) difference in start dates can lead to statistical significant result emphasizes the need to have uniform start dates across treatments. Thus, yam dormancy studies that evaluate the duration of visible dormancy must provide adequate information on the start date, preferably in days of the year (DOY), for the evaluation of duration of dormancy.

This study also found that differences in the duration from a defined planting date to sprouting or from a defined start of storage to sprouting in D. rotundata is not significantly influenced by tuber provenance. Indeed, the variation in date of sprouting was greater among landraces (up to 37 d) within a provenance than among provenances (1 to 2 d). The mean date of sprouting among provenance groups ranged from 55 to 57 DOY and it followed the order GS > TS > HF. The uniformity in sprouting date among provenance and presence of landraces with early and late sprouting times indicated that, though the 20 landraces used in this study were collected from different agroecologies, which vary in the timing of the start and length of growing seasons, there was no clear evidence to suggest that they were developed due to adaptation to the lengths of the wet-growing and dry-storage period at the various agroecologies. Thus while variations in sprouting date among yam species may be due to differences in agroecology of origin ([6], [8], [13), the difference among landraces within the species of D. rotundata may not be related to differences in agroecology of origin within Nigeria. The next question would be are the landraces used in this study truly specific to the respective agroecologies? This question can best be ascertained through molecular analysis. However, this study has assumed that they are specific to the respective agroecologies because their local names depict their origin. Further, their popularity among farmers in the various agroecological zones suggested that they are well known. In support of this, is the report of Okoli, 1980 [14], which said that the landrace ‘Ekpe’ is adapted to Anambra State in South-east Nigeria, and in this study 99-14 is described as ‘Ekpe’ and was collected from Anambra State in the HF. The presence of both early and late sprouting landraces among provenances supports the suggestion of Alexander and Coursey, 1969 [15] that farmers have selected for varieties with varied sprouting dates to meet their short and long term need of the tuber. The evolution of D. rotundata suggests that it is the result of hybridization between a rain forest species, D, cayenensis with short dormant period due to short dry season, and a wild species from the Guinea savanna with slightly longer dormant period due to longer dry season [8]. Therefore, it is proposed that the presence of landraces with varying dates of sprouting may have developed due to differences in the genes for length of dormancy or difference in the dominance of the genes selected for by farmers.

Results from thousands of tubers evaluated in this study showed that the earliest time of sprouting occurred in late December, but mostly within the first three months of the year ([16], [17], [18]). The occurrence of sprouting at a defined period or season (at end of the Harmattan season to the beginning of the rains) in the year in Nigeria such as between late December of previous year and April of the next year, suggests that landraces have developed life cycles/stages that fit the annual seasonal cycle. More specifically, the fact that sprouting is not restricted to beginning in April or May which marks the onset of the rains in the GS for example, negates the suggestion that the time of sprouting coincides with the onset of the rainy season and the time of planting ([19], [20]) per se. It is therefore suggested that it is not the actual start of the growing season that is the cue to start sprouting in Ibadan or Abuja particularly but rather that landraces have adapted or developed life cycles that fit the annual seasonal cycle and that sprouting always occurs before the onset of the rains because they have internal mechanism(s) that determine the onset of the next growing season. Okoli, 1980 [14] and Degras, 1993 [13] have long ago suggested also that the timing of the end of dormancy/start of sprouting is regulated by an endogenous biological ‘clock’.

The effect of storage environment (in the barn or controlled environment facility) on yam dormancy is known but the effect of storing tubers in agroecologies other than their adapted one have not been investigated. In contrast to provenance, storage agroecology affects the duration of sprouting. Sprouting was earliest at Onne and latest at Abuja with Ibadan being intermediate. Generally, sprouting was 10 d earlier if tubers were stored at Onne compared to storage at Abuja Therefore, date of sprouting was clearly dependent on inherent genetic makeup of the landraces and the agroecology where they are stored, with Onne being more favorable for early sprouting. Earlier sprouting was probably encouraged at Onne due to the 1 to 2 oC warmer average storage temperatures [21] and higher relative humidity than that at Abuja [22]. The rate of progress of plant developmental events has been shown severally to increase with increasing temperature up to the optimum temperature for the process [1]. In the past, temperature has also been shown to affect the duration to sprouting in yam. It has been shortened by 10 to 16 d by storing tubers at 30 oC compared to 20 oC [17]. The effect of temperature is further enhanced when high temperatures of 30 to 35 oC are combined with high relative humidity in the range 70 to 80-85 % ([22], [17]). Therefore, the small (10 d) degree of effect of storage agroecology on date of sprouting indicated that the effects of storage location on date of sprouting may be related to their ability to affect the progress of Phase 2 of dormancy [23].