Abstract: Over 90% of the energy consumed in the country is depending on woody biomass. The rising demand for tree products and expanding population pressure resulted in decline of forest cover and consequently the demand for tree products exceeded the supply. This study was conducted at Armania Kebele with the aim of to evaluate different cutting time and management practices yielding more wood biomass volume. One indigenous tree species, preferable by the farmers, namely Acacia nilotica was selected and the experiment design in 3x4 factorial experiment with randomized complete block design arrangement and replicated three wise. Eight trees per plot were planted in two rows with 2 meter spacing. The result shows that, Acacia nilotica could be coppiced well with 13 to 29 numbers of coppices per stump at all stages of cutting time. Root collar diameter and plant height were highly correlated with growth period. Hence, Leaving of two and three number of coppices could give higher woody biomass volumes as compare to leaving one and all number of coppices and control (uncut). Therefore it is necessary that farmers should allow two and three number coppice per stump to get high woody biomass volume for fuel-wood consumption.

The rising demand for tree products and expanding population pressure resulted in the decline of forest cover and consequently the demand for tree products exceeded the supply. The supply of wood and woody biomass products in the north Shewa zone comes from different forest and vegetation types and production systems, including natural forests, woodlands, bush lands, community woodlots, and farm forestry. The share of the total domestic energy is: fuel wood and tree residues 70%, dung 8%, agricultural residues 7% and the rest comes from other sources (EFAP, 1994). Hence, 90% of the total energy is coming from biomass. The trend in north Shewa is not different from the national, especially for the lowlands. According to EFAP, 1994 report a large deficit wood has occurred since 1992 (33 million m3), and fuel-wood deficit amounted to 32.5 million m3. This deficit has been the main cause for the mining of forest resource base. Based on assumed per capita consumption requirements, in 1992 total requirements for wood products have been estimated to be 47.4 million m3, of which fuel wood demand was 45 million m3 (EFAP, 1994). The demand for construction poles and fence posts for construction of new houses and renovation was estimated to be 2.1 million m3. The total deficit is expected to be 84.2 million m3 by the year 2014. Thus, being aware of these deficit alternative sources of energy, afforestation (massive plantation) program and efficient utilization and management of forest land should continue to receive attention based on research results for a greater biomass and quality production.

The existing experience on plantation species in northern Shewa zone indicates that most species used are exotics, dominantly Eucalyptus. There is a danger in overlying on a few species. Pest or disease epidemics could wipe the entire species with devastating effects. This will become serious when there is no alternative species to rely on. Focus has given to exotic species due to the information available and their fast growth rate. However, the indigenous species have been blamed for their slow growth rate. As a general truth,  for most of the indigenous species there is no information at all and  some of the indigenous species are known for their slow growth rate but there are species with fast growth rate, even faster than the exotics.

Study at Sirinka agricultural research centers revealed that Acacia polyacantha produces four times more biomass than Eucalyptus camaldulensis at the end of three years growth (Yigardu 2002). Farmers also indicated their preference to Acacia nilotica for it produces a good charcoal and fuel wood. Moreover, survey report of the center at various weredas indicated that increasing demand for fuel-wood and the decreasing supply trend. The indigenous species which have fast growth rate also have additional desirable attributes over the exotics (e.g. termite resistance/adaptation to the environment). Wood and charcoal sale has been becoming the main stay of some farmers in northern Shewa zone specially when there is food shortage/drought. The accessibility of some weredas to the main road made current and future wood market promising. Though farmers have their own management practices of the above mentioned indigenous species, research efforts made to improve the growth rate/performance through better management is not significant.

Acacia Nilotica occurs in woodlands and scrub in dry and moist kola agro climatic zones, 600-1700 m.a.s.l (Azene Bekele, 2007). It is Medium to fast growing large shrub or small tree, usually 2-6m but can reach 14m, branching from the base to make a rounded crown. Literatures indicate that Acacia nilotica do not coppice well (Tree data base CD, Azene Bekel, 2007,) but farmers in the lowlands of north Shewa say it can coppices well. Therefore, the trial was conducted with the aim of evaluating Acacia nilotica tree species for a greater woody biomass and quality production under different management regimes.

One indigenous tree species, known for its relative fast growth rate and preferable by the farmers, namely Acacia nilotica was selected for evaluating its coppice potential. The field experiment was conducted at Armania Kebele, Tarma-Ber district, North Shewa zone and the experiment design in 3x4 factorial experiments with randomized complete block design arrangement and replicated three wise. The dimension of a plot was 6.5mx10m (65 m2) and eight trees per plot were planted in two rows with 2 meter spacing. At the age of three years old, four years old and five years old trees were cut close to the ground.  And then after rising of sprouts from the stump Leaving one number of coppice , Leaving two number of coppice , Leaving three number of coppice  and leaving all coppice per stump per cutting time were applied with one satellite control uncut trees. Growth parameters (root collar diameter, height and DBH), survival rate and fresh and dry weight data were collected. 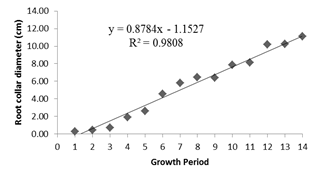 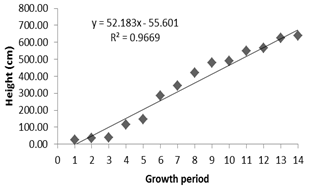 Fig. 2. Height of Acacia nilotica at 36 month after planting 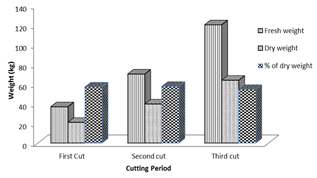 The result of dry wood biomass of Acacia nilotica ranges from 55 to 58 percent.

The results of this study disproof the previous findings that says Acacia nilotica did not coppice (Tree data base CD, Azene Bekele, 1993,). However, the present study confirmed that Acacia nilotica could be coppiced well at the age of three, four and five years after planting like other coppiced tree species (Chirwa et al, 2003).  From the first cutting time at the age of three years after planting, number of coppice per stump ranges from m 13 to 29 and gave higher volume of woody biomass. The result  of  cutting period and leaving of number of coppice indicates that leaving of two coppices number of Acacia nilotica  could gave higher woody biomass volumes at 36 MAP cutting period as compare to leaving one coppice at 48MAC and  leaving all coppices, three coppices and one coppice at 84 MAP (Table 1).

Columns with same letter are not significantly different, MAP (months after plant), MAC (months after cutting) and CV (coefficient of variance).

Columns with the same letter subscriptions was not significantly different, MAP (months after plant), MAC (months after cutting), CV (coefficient of variance).

Woody biomass of different coppice levels result indicated that significant difference was observed among treatment (Table 4). Leaving of two and three number of coppices were increased the woody biomass volume of Acacia nilotica by 200.82%, and 197% respectively as compare to uncut tree.

Columns with the same letter subscription was not significant different, MAP (months after plant), MAC (months after cutting), CV (coefficient of variance).

Acacia nilotica could be coppiced well and it is a medium to fast growing tree species, at every three months the root collar diameter and height of this tree increased by 1.5cm and 100cm respectively. Therefore, Cutting of Acacia nilotica tree at 36 MAP and 60 MAP with leaving two and three number of coppices gives higher woody biomass volume and increases the woody biomass volume by 270% and by 365% respectively over leaving one number of coppice and control. Despite of the present findings on Acacia nilotica coppice management there is needs to do more research on other ages in order to overcome the problems of fuel wood and other wood demand shortage in the district.