Abstract: The present study was conducted with the aim of evaluating some of the factors that influence induction and plantlet regeneration of somatic embryos in Mentha arvensis ( L) var piperascens Holmes (menthol or Japanese mint)since there are no available reports on Somatic embryogenesis and regeneration of plantlet in this medicinally important plant  species. Leaves from plants growing under temporary shed were cultured on Murashige and Skoog medium fortified with (0.5-5.0mg/L) Napthlene acetic acid (NAA)+(0.5 mg/L)Thidizuron(TDZ). High frequency of somatic embryo formation was found at (2.5mg/L) NAA+ (0.5mg/L) TDZ in leaf explants respectively, Secondary somatic embryogenesis was also observed when primary somatic embryos were sub cultured same somatic embryo induction medium well developed cotyledonary stage embryos were germinated on MS medium supplemented with (0.5mg/L) (NAA) + (0.5-5.0mg/L)TDZ maximum 80% of somatic embryos germination and plant let formation was found at (2.5 mg/L) NAA+ (0.5 mg/L) (TDZ). The post translation survival rate of plants was 80% plants and flowers formation were morphological similar to the mother plants.

Mentha ravensis (Linn). var piperascens Holmes (menthol or Japanese mint) is an industrial crop that is widely cultivated for its essential oil from which menthol is crystallized. The essential oil, menthol and terpenes of the dementholated oil of M. arvensis are variously used in the food, perfumery and pharmaceutical industries. Improvement in the pest and disease tolerance and other adaptive characters determining the yield and quality of essential oil will make mint cultivation more economical. Construction of the desired M. arvensis genotypes will require transfer of specific foreign genes into the crop. Efficient procedures are required to regenerate plants from the transformed cells and for rapid micro-propagation of plant(s) of selected genotype(s). In vitro high efficiency procedures for cell and callus cultures and shoot regeneration from axillary buds and leaf explants have been reported in some species of the genus Mentha, especially the commercially important species M. piperita and M. spicata (Lin and Staba 1961; Cellarova 1992).

Total production of Mentha matches more than 32,000 MT per year and India is considered one of the largest producer and exporter with 27% commodity market share. Corn Mint is valued as multimillion cash crops for its multipurpose uses in the field of pharmaceuticals cosmetics as well as flavouring of food and beverages, oral preparations, such as toothpastes, dental creams and mouth washes. Green leaves of plants are used formaking chutney and for flavouring culinary preparation vinegar, flavour liqueurs, breads, salads, soups, cheese jellies, spice mixtures for many processed foods as well as in herbal tea (Moreno et al., 2002; Kofidiset al., 2006; Yadegarinia et al., 2006).

Somatic embryo genesis offers great potential in plant multiplication and crop improvement for efficient cloning and genetic transformation (Ammiratio 1987, Roberts et.al., 1995). It is an alternative and efficient method for plant propagation over regeneration via organogenesis. Somatic embryos are believed to originate from single cell while organogenesis is through collective organization of cell. Therefore the plants derived from somatic embryos tend to be genetically alike; in addition somatic embryos are bipolar structures with root and shoot apices that can easily be developed into complete plantlets.

Embryos formed in cultures have been variously regenerated as accessory embryos, adventive embryos, embryoids and supernumerary embryos. Kohlenbach (1978) has proposed the following classification of embryos.

1.   Zygotic embryos- those formed by fertilized egg or the zygote.

2.   Non- Zygotic embryos- those formed by cells other than the zygote.

i.        Somatic embryos- those formed by the sporophytic cells (except zygote) either in vitro or in vivo. Such somatic embryos arising directly from other embryos or organs (stem embryos in carrot and butter cup) are termed adventive embryos.

In Somatic embryogenesis the embryo regenerate from somatic cells, tissues or organs either de novo or directly from tissues (Adventive origin) which in the opposite of zygotic or sexual embryogenesis. Various terms for non-zygotic embryos have been reported in literature such as adventive embryo (somatic embryos arising directly from other organs or embryos) parthenogenetic embryos (those formed by the unfertilized egg) and androgenetic embryos (formed by the male gametophyte). However in general context somatic embryos are those which are formed from the somatic tissue in culture, i.e. In vitro conditions. In sexual embryogenes is the act of fertilization triggers the egg cell to develop into an embryo, however it is not the monopoly of the egg to form an embryo. Any cell of the gametophytic (embryo-sac) or sporophytic tissue around the embryo-sac may give rise to an embryo, cells of the nucellus or linear integument may develop into embryos in the members of Rutaceae family. There are examples of embryos arising from endospermal cells also. However, the rate of multiplication is very low. In the present communication, we report reproducible method for in vitro plant regeneration via somatic embryogenesis in M. arvensis var piperascens Holmes (menthol or Japanese mint) from leaf explants using various cytokinins especially TDZ.

Seeds of M. arvensis var piperascens Holmes (menthol or Japanese mint) were collected. From CIMAP (Central Institute of Medicinal Aromatic Plant Uppal. Hyderabad). Seeds which were initially soaked overnight and then washed with running tap water for 30 min to remove adherent particles, thoroughly washed seeds were then immersed in 5% (v/v) Teepol for 10 min and then rinsed 3 times with sterile double distilled water. This was followed by the surface sterilization with 05 % (m/v) HgCl2under the sterile conditions for 5 min. these were rinsed 5 times in sterile double distilled water to remove all traces of HgCl2 the sterilized seeds were then placed on to the basal Murashige and Skoog (1962) medium for germination.

Leaf (6 weeks old ) explants from axenic seedlings were placed on MS medium supplemented with 30 gm/L sucrose along with different combinations of NAA (0.5 – 5.0 mg/L ) + 0.5 mg/L TDZ respectively. The pH of medium was adjusted to 5.8 prior to autoclaving 121o C for 15 -20 min. All the cultures were incubated under 16/8 h light / dark photo period at 25±2o C. a light intensity of 40 µ mol m-2s-1 was provided by cool- white fluorescent tubes. The cultures were transferred to fresh medium after an interval of 4 weeks.

Table 2. Effect of NAA + TDZ on the conversion of somatic embryoids into plantlets in M.arvensis. 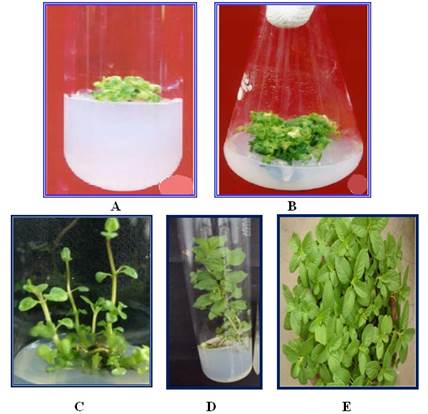 Rooted plantlets were removed from the culture medium and the roots were washed under running tap water to remove agar. Then the plantlets were transferred to polypots containing pre- soaked vermiculite and maintained inside a growth chamber set at 28oC and 70 – 80 % relative humidity. After three weeks they were transplanted to poly bags containing mixture of soil + sand + manure in 1: 1: 1 ratio and kept under shade house for a period of three weeks. The potted plantlets were irrigated with Hogland’s solution every 3 days for a period of 3 weeks (Fig-E).

In the present investigation, the results on somatic embryogenesis have shown that auxin such as NAA (0.5-5.0mg/L0 along with cytokininTDZ are essential for inducing the somatic embryogenesis from leaf explants of M.arvensis.A major factor for somatic embryogenesis is the nature of growth regulators used in the induction medium. The type of auxin or auxin in combination with cytokinin used in the medium can greatly influence somatic embryo frequency. The requirement of cytokinin in addition to auxin was observed in Sapindus trifoliatus (Desai et.al., 1986), Termineliaarjuna (Kumari et.al., 1998) and Psoralea corylifolia (Sahrawat and Chand, 2001) as it was observed in the present studies. Somatic embryo genesis was induced on medium containing NAA alone in Solanum melogena (Matsuoka and Hinata, 1979; Gladdle et.al., 1983; Sharma and Rajam, 1995).

Matsuokaand Hinata(1979) and Gleddle et.al., (1983) also observed a stimulatory effect of NAA on embryogenesis in eggplant hypocotyls explants as well as in leaf explants with carrot hypocotyls explant where somatic embryos were formed in response to a wide range of auxins including (IAA: NAA, 2,4-D, 2,4,5-T).

The embryogenesis action of NAA in egg plants were also different in another aspect where the role of auxin in embryogenesis species other than eggplant, induction and maturation of somatic embryos to the cotyledon stage was achieved on the same medium. The removal of NAA was required only for further development of embryos to plant lets and cotyledon explants grown on NAA exhibited globular shaped heart shaped and torpedo shaped stages. The embryogenic potential was markedly dependent on genotype isolated embryogenic callus from M.arvensis.

Somatic embryogenesis is also preferred because it allows production of plant without somaclonal variation and in efficient cloning and genetic transformation (Sharp et.al., 1980). Synthetic seeds can also be developed by encapsulating somatic embryos in sodium alginate complex with calcium chloride as it was developed in Solanum melogena (Lakshmana Rao and Singh, 1991). Whereas Binzel et.al., (1996) reported that the entire process of induction and maturation of the embryos was completed on the same MS medium containing auxins and cytokinins (NAA+ TDZ) in M arvensis it was observed the requirement of both the hormones in the present investigations. Similarly somatic embryos maturation on MS medium containing the combination of auxins (NAA) and cytokinins (BAP) was observed in Cajanus cajan (Mallikarjuna et.al., 1996), Prunu saxivum (Garin et.al., 1997) and Hardiewickia binate (Chand and Singh 2001). Solanum surattensce (Ugandhar.2002). NAA and cytokinin (TDZ) was observed in Mentha piperita (Saha et.al.,2010)

Thus somatic embryogenesis always appeared to be dependent on the types of auxin/cytokinin/auxin+cytokinin and their concentration in the medium. The type of phytohormone and its concentration also varies from genotype to genotype. High concentration of auxin in combination with less concentration of cytokinin induced the somatic embryogenesis and maturation of somatic embryos in M.arvensis. But in the present study, a highest germination rate 70% was achieved. Plant lets with well developed shoot and root systems were washed carefully with tap water and transferred to plastic cups containing a mixture of vermiculite and soil for hardening. The acclimatized plantlets were successfully transplanted to pots under field conditions. Regenerated plants showed no observable morphological alteration.

During the present investigations, it was found that the high concentration of auxin in combination with less concentration if cytokinin induced the somatic embryogenesis and maturation of somatic embryos in M.arvensis. In conclusion, for induction of in vitro somatic embryo genesis the type of primary explant, choice of genotypes and hormonal concentration plays on important role (Patel et.al., (1994).