Farmers’ Awareness of the Effects of Climate on Growth and Yield of Potato (Solanum Tuberosum) in Jos-South Local Government Area of Plateau State, Nigeria

In recent years, there has been a growing awareness that scientific knowledge alone is inadequate for solving climate crisis. Thus, the indigenous local farmers have been recognised as powerful knowledge holders on climate change and key factors for developing policy to mitigate and cope with its effects. The knowledge of the local and indigenous farmers is increasingly recognised as important source of climate knowledge and adaptation strategies (Natural Sciences, 2012). Traditional knowledge, innovations and adaptation practices embody local adaptative management to the changing environment and compliment scientific research, observations and monitoring (International indigenous People’s Forum on Climate Change, 2009).

Most local communities possess traditional and local knowledge that may help them better adapt to the impact of climate. Some communities are using traditional knowledge to record their observations of climate and its impact on the environment as a result of their close relationship with land and their dependence on natural resources for their livelihoods and have long been observing and noting the impact of climate conditions (UNESCO, 2010).

Unless appropriate mitigative and adaptive measures are taken, climate change will frustrate farmers’ efforts to achieve sustainable agriculture production and food security. However, developing such strategies will require information from the farmers since the ability to adapt and cope with climate change depends on the knowledge, skills, experiences and other socio-economic factors (Maharjan et al., 2011). It is against this background that this study seeks to assess farmers’ awareness on the effect of climate on growth and yield of Potato (Solanum tuberosum) in Jos- South Local Government Area of Plateau State, Nigeria. 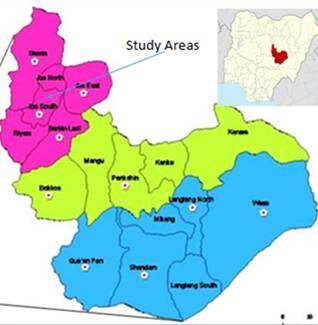 This paper makes use of two types of data. The first data is secondary sourced materials from past studies e.g. books and journals. The second data is from administering of questionnaire. Purposive sampling design was followed in the selection of 200 farmers. The study was conducted in four districts of Jos-South (Du, Vwang, Kuru and Gyel).One village was selected from each district using the simple random technique. Descriptive techniques of data were employed such as simple percentages to describe the knowledge of the respondents.

The number of respondents per location sampled reveals that the Kuru location has the highest with Vwang location recording the lowest number of respondents (Figure 2). The sex distribution ratio per each location was depicted in table 1. The results revealed that male and female constitute 47% and 54% respectively. This implies that more females are into farming potato than males. 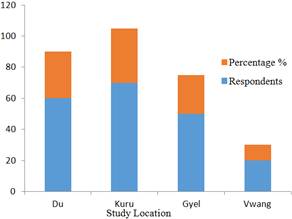 Table 2 shows both young and old people are involved in farming. The distribution shows that about 46% of the respondents were between 31-40 years of age. Respondents that were over 41years of age constituted about 14%.This imply that most of the respondent (about 86%) was relatively young and physically active. This has a direct bearing on the availability of able-bodied manpower for agricultural production and also, age influence the ability to seek and obtain off-farm jobs and income which could increase.

Respondents’ knowledge with regards to time of planting and harvesting of potato was analysed. It was revealed that 76% planted potato in April while 76% of the farmers also harvested potato in July Table 6. This farmers’ observation corroborated the findings of Ifenkwe and Okonkwo, 1983 that in Jos–South, potato is planted when rain becomes stable usually between the last week of April. Also, Ifenkwe, 1989 reported that yield declined with delay in date of planting probably as a result of premature killing of plants by late-blight disease.

Table 6. Respondents knowledge on the time of planting and harvesting of irish potato.

Table 7. Respondents knowledge on increase or decrease in temperature.

Table 7 shows that 76% noticed an increase in temperature while 24.5% of the respondents stated that temperature trend in the study area has decreased. The farmers’ assessment agreed with the expert report Zemba et al., (2013) that temperature has increased in the Jos-Plateau and the yield of tuber is on the decline due to knobbiness and secondary growth at emergence/vegetative stage.

The distribution of the respondents according to their assessment of rainfall trend in the area is represented in Table 8. Majority of the respondents 70% noticed an increase in rainfall while 30% opined that rainfall trend has been on a decrease. This implies that the more the rain at sprouting to emergence/vegetative and tuber set/initiation stage, the better the growth and yield of potato. This finding agrees with Zemba et al., (2013) that the total rainfall correlate significantly (r=0.470) with potato at 5% probability level.

Table 9 shows that 74% of the respondents indicated that rainfall trend affect the final yield of potato, 16% said minimum temperature affect the final yield of potato while 10% indicated that maximum temperature affect the final yield of potato. This implies that the higher the rainfall at tuber bulking stage, the lower the yield. This finding agrees with Wuyep et al., (2013) that high rainfall during tuber initiation of potato is not healthy to the crop as it causes poor aeration and subsequently poor development of tubers. Also, this finding corroborate with Zemba et al., (2013) that rainfall amount has negative correlation coefficient of -0.665 at 1% level of significance. This implies that the higher the amount of rainfall in July, the lower will be the yield. This is not surprising because the month of July coincides with tuber bulking/ripening stage.

Table 10 reveals that 9% are of the opinion that maximum temperature causes lates-blight disease of potato, 14% opined that minimum temperature causes late-blight disease of potato while 76% said rainfall causes late-blight disease of potato. This implies that the more the rain during tuberization, the lower the yield of potato. Thus, the farmers assessment corroborate with the findings of expert Nwakocha (1987) that blight causes between 40-80% reductions in yield. The peak incidence is between July and August when the haulm of most susceptible varieties are destroyed by inciting pathogen phythopthora. This disease is accompanied by high relative humidity, dew and frequent rainfall (Hienfling, 1987).

Table 10. Respondent knowledge on the causes of late-blight disease of irish potato.

Table 11 results shows that 35% of the respondents don’t know how to eradicate this disease while 66% are of the opinion that early planting will halt the late-blight disease. This confirms the work of Ifenkwe (1989) that harvesting is carried out in early July to avoid destruction of tubers by inciting pathogen phythopthora.

The conclusion drawn from the findings is that there is a good knowledge on the effect of climate on the growth and yield of potato among farmers in the study area. Also, the study depicts that farmers are experiencing the negative effect of climate in form of reduced crop yield. Based on these findings, the following recommendations are proffered

1.   The present planting period for potato is found suitable and should be maintained. This will help to maximize the positive effects of climate.

2.   Information on climatic data should be collected all over the study area to provide information for long term planning.

3.   Late-blight resistance varieties seed of potato should be developed in order to eradicate late-blight disease which reduces 40-80% yield of potato.

4.   Seminars and workshop should be organized by the relevant authorities to enlighten the farmers more on effects of climate on growth and yield of potato