Efficacy of BotaniGard (Beauveria bassiana) Against Whiteflies on Poinsettia and Dahlia

Whiteflies (Homoptera: Aleyrodidae) are common pests of field and green house crops worldwide [4]. Whiteflies are common insect pests in flower farms of Ethiopia affecting production of various groups of plants including different cuttings, flowers, herbs, etc. [1]. Various insecticides are used in rotation against these insect pests as a means of delaying the onset of pesticide resistance. However, the need to produce pest free product necessitate frequent application of pesticides, which in turn aggravates development of pesticide resistance, and hence decline in pesticides efficacy [5,7]. Because of this and other related problems, there is a growing need to promote use of biocontrol agents including parasitoids, predators and entomopathogens in an Integrated Pest Management (IPM) program.

The success obtained with the use of the predatory mite Phytoseiulus persimilis [2] against red spider mites in cut roses has raised great interest in exploring biocontrol based IPM in the management of green house pests among flower farms. Beauveria bassiana is an entomopathogenic fungus which infects several insect species. Different strains of the fungus isolated from a variety of insect species are commercially available. One such commercially available product is BotaniGard. B. bassiana infects insects directly through the body wall when conidia contact and become attached to the cuticle. The conidia germinate and penetrate the insect body wall by a combination of mechanical force and production of enzymes that digest the cuticle. Parasitoids and predators such as the predatory mite, Amblyseius swirski (Acarina: Phytoseiidae) are currently in use in the biological control of green house whiteflies in Ethiopia [6] as they are in several countries [15]. Entomopathogens such as Beauveria bassiana are used to aid this effort particularly in situation where whitefly population are large and out of control [9]. This experiment was therefore conducted to compare the performance of BotaniGard with the conventional insecticides against whiteflies in poinsettia and Dahlia with the aim of strengthening the biological control of whiteflies in green house produced plants of Ethiopia.

The experiment was conducted between December 2010 and March 2011 in Maranque plant greenhouse located at Doni in central Ethiopia. The experimental field measured 2500 m² where two types of mother-stock plants were grown, Dahlia and Poinsettia each in an area of 1250 m². This area was divided in 6 bays. Three bays in alternative fashion were allocated for treatment with the test pesticide, BotaniGard and the other three for spraying with the conventional insecticides according to the routine practice of the farm.

Details of the insecticide used in the conventional treatments are shown in table 1. BotaniGard was applied at the concentration of 0.15% by mixing 150 ml of the product with 100 l of water weekly for the first ten weeks and twice weekly thereafter until the termination of the experiment. Adult whitefly population was monitored using yellow sticky card. Twelve cards per treatment and per bay were used. Traps were changed every three weeks. Mean adult population from per sticky card per treatment was calculated from each plant species to examine population fluctuation and differences in pest number from both the test (BotaniGard) and conventional insecticide (control treatment).

Data were collected weekly every Monday starting from week 49 (6 December 2010) through week 8 (21 February 2011). Mean whitefly number per treatment was calculated to examine population fluctuation in adjacent BotaniGard and control treatments of both Dahlia and poinsettia. To assess presence of statistical differences in whitefly population between treatments a t-test was used using counts recorded from each of the 12 cards per treatment at the different weeks. A pooled method for equal variance and Satterthwaite method for unequal variance [12] was used.

Table 1. Type, rate and frequency (week) of application of insecticides in conventional pesticides treatment against whiteflies on Dahlia and Poinsettia at Maranque plant, 2010/11. 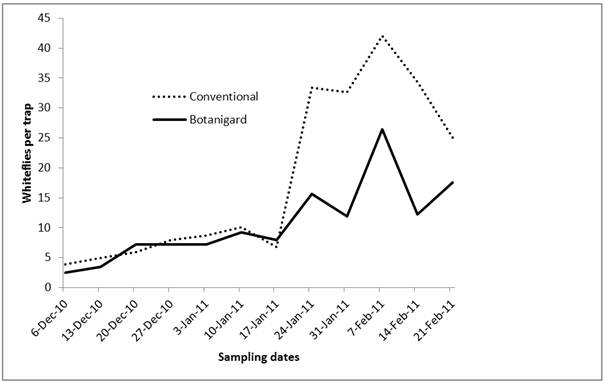 Fig. 1. Number of whiteflies trapped on different weeks on poinsettia treated with conventional insecticides and BotaniGard. 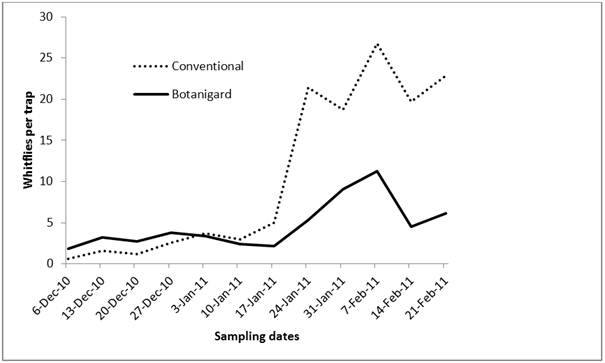 Fig. 2. Number of whiteflies trapped on different weeks on Dahlia treated with conventional insecticides and BotaniGard.

Whiteflies number fluctuated between 0.6 and 26.8 in Dahlia and between 3.9 and 42.0 on poinsettia treated with conventional insecticides (Table 2).

Table 3. Differences in the level of whitefly population per trap on different weeks on Dahlia and poinsettia treated with BotaniGard, Doni 2010/11.

This suggests that Dahlia is less susceptible to whiteflies than poinsettia. A study on tritrophic effect of host plants on susceptibility of flower thrips to the entomopathogenic fungi Beauveria bassiana showed that significantly greater levels of fungal infection were observed when thrips were treated on beans (Phaseolus vulgaris) than on impatiens (Impatiens wallerana) [14].

I thank the assistance of Jos Groenewgen and his group for their assistance in data collection and Maranque plant for providing experimental plots.