Modern developments in technology and the continuous increasing in the productivity of agricultural products are closely associated with the intensive use of fungicides, despite the wide occurrence of fungal plant disease. Several types of fungicide molecules with different mode of action are commercially available. At the same time, there is a constant danger from inevitable appearance of resistant populations of pathogens, resulting in the failure of crop protection.

This problem is further aggravated if efficient antifungal compounds are not developed as an alternative to replace the "failed fungicides" [1-6]. A number of fungicides currently available are considered unsafe to the environment [7]. It is essential to discover novel antifungal compounds environmentally friendly to improve the quantity and the quality of agricultural goods. Organotin compounds are acknowledged as fungicides, bactericides as well as antitumor drugs and have been attracting interest to inorganic chemists in the last decades [8-15].

Continuing with our research program concerning the synthesis, characterization and antimicrobial activity of coordination compounds, this study reports on the in vitro antifungal assay of tin(IV)-bis(pyrimidin-2-ylthio)alkanes derivatives as well as on an attempt to correlate that with chemical aspects concerning the coordination chemistry field. These organotin(IV) compounds were previously characterized by our research group, and recently their bioassay have been carried out on microorganisms.

Several basic plant pathology methods are available to investigate the antifungal activity of substances [16]. Irrespective of the technique used in this study to determine the fungicidal effect, fungal growth was inhibited at several concentrations. The site in the microorganisms where the biochemical interactions occurs is a challenge to any researcher in the field. Nevertheless, the chemical properties of a molecule or a coordination compound may give an insight into the relationship of that with the antimicrobial effect. For instance, substituent groups have proven to be important chemical features of bioactive substances to a broad spectrum of microorganisms [17]. The significance of substituent groups to biological activity is revealed by N-heteroarylbenzylamines and the corresponding Schiff base derivatives (p-RPhCH=NR'; p-RPhCH=NR' , R = H, CH3; R' = pyridin-2-yl, pyrimidin-2-yl, benzothiazol-2-yl) [18]. These compounds are active against strains of Gram-positive and Gram-negative bacteria, presenting MICs (Minimum Inhibitory Concentration) in the range of 32 to 256 mg L-1. Similarly, the bioassay of the amine precursors on phytopathogens showed inhibition of 3.6 to 100 % at the concentration range of 6.25 to 100 mg L-1. In this case, these amine compounds were the most active against R solani in comparison to the corresponding Schiff base derivatives. The opposite effect happened to D graminea. The increasing activity of these compounds was attributed to their chemical properties, either the presence of a biphenyl ring moiety or a large p-conjugated system on the molecules [18]. Fig. 1 shows the chemical structures of the bis(pyrimidin-2-ylthio)alkanes.

As shown in Fig.1, there is structural differences among the bis(pyrimidin-2-ylthio)alkanes regarding the carbon chain size between the sulfur atoms. This chemical property is not relevant to the antimicrobial effect of the free ligands, regardless of the chain size, because they were not active. However, upon coordination to the metal center, the free bis(pyrimidin-2-ylthio)alkanes are activated.

The antifungal data of the organotin(IV)- bis(pyrimidin-2-ylthio)alkanes demonstrate that not all of the compounds have inhibited the growth of the fungal species. The results show clearly that the tri- and tetrachloride tin(IV) derivatives {3, 4, 7, 8, 12 and 13, see (a) Graph 1} are not fungi toxic as well as the free ligands even at the higher concentrations tested (1000 and 3000 mg L-1). This antifungal data are in contrast with the results of the other organotin(IV) compounds tested. 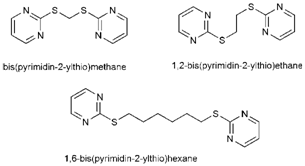 The standard range of concentration in which organotin(IV)-Schiff bases are active against microorganinsms is 50 to 250 mg L-1 [20, 21]. This range of concentration is an outstanding result, although marketable fungicides and bactericides such as Tetracycline, Chloramfenicol, Kanamycin, Cefazolin Sodium and Cefotaxime show growth inhibition at lower concentration (3.12 mg L-1) [22]. The triphenyltin(IV) derivatives of ptm and pte, complex-1 and 5, were the most active compounds showing activity below 150 mg L-1, which is a good result in comparison to the range of organotin(IV) derivatives of Schiff bases as well as organic fungicide molecules such as pyridin-2-yl, pyrimidin-2-yl and benzothiazol-2-yl [18, 20].

The toxic effect of the ligand upon coordination – The bioassay revealed that the free ligand is inactive against the microorganisms tested. However, the number of carbon atoms from the alkyl fragment of the ligand appears to influence the fungal growth upon coordination. As the number n reduces in the (CH2)n (n = 1, 2, 6) moiety of the coordinated ligand, the corresponding compound becomes more active. That is the case of the triphenyltin(IV) derivatives, complex-1 and 5 (n = 1 and 2 respectively), which are active at the concentration of 80 mg L-1 (method B). By adding more carbon atoms to the (CH2)n group, complex-9 and 10 {n = 6, see (b) Graph 1}, the concentration increases to 400 mg L-1 (method B). A slight different pattern happens to the diphenyltin(IV) derivatives. Complex-2 (n = 1) was fungi toxic at the concentration of 1000 mg L-1 (method A) and complex-6 (n = 2) at 500 mg L-1 (method A) while complex-11 (n = 6, see Graph 1) was inactive to all fungi tested. As the n value in the (CH2)n fragment increases the inhibitory concentration of these derivatives decreases.

The coordination mode of the ligand to a metal center is also a chemical feature that might influence the biochemical interactions on microorganisms. In complex-9, the ligand is monodentate towards the metal but in complex-1, 2, 5 and 10 the ligands are acting in a bridging bidentate mode (see Fig.2). Among these compounds, only complex-9 has the pth ligand with uncoordinated loose end. Because of that, the difference in coordination mode of this ligand towards the metal center is supposed to show a contrasting biochemical interaction. However, a comparison of the resulting activity between complex-9 and 10 show that these chemicals were fungi toxic at the same concentration. Consequently, the coordination mode of the bis(pyrimidin-2-ylthio)alkanes have no influence on the fungicidal effect of the organotin(IV) compounds tested. Nevertheless, the bioassay data reveals that the activity of the ligands are related to their coordination to the tin(IV) center and that the size of the alkane chain has an influence on the fungi toxic effect.

The biological activity of organotin(IV) compounds are recognized in many geometric arrangements. In these compounds the tin(IV) atom is usually bonded to an oxygen, nitrogen or sulfur atoms from the ligand. Several organotin(IV) compounds that show antitumor activity seems to have a tin(IV)-oxygen bond as a common chemical feature [8]. Similarly, tin(IV)-nitrogen and tin(IV)-sulfur bonds appears to be the common chemical features of fungicides and bactericides [11, 23-25]. Not only the tin(IV) derivatives but also transition metal complexes in general play an important role in biological activity. A number of octahedral first-row transition metal complexes are recognized to show antifungal activity [26]. 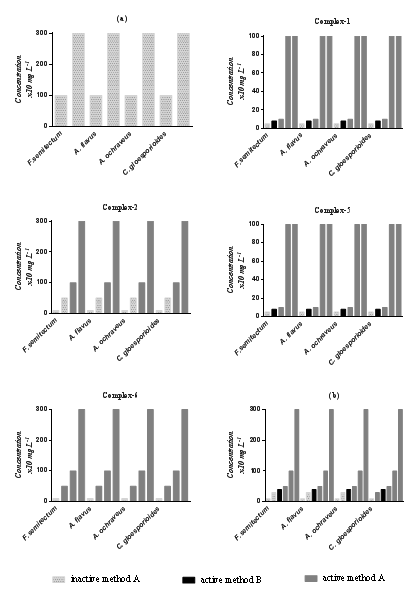 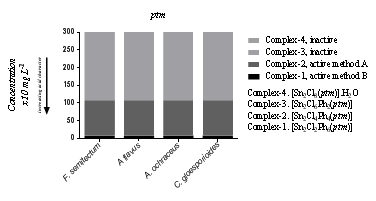 Considering that the Zn(II)- and Mn(II)-sulfur are typical bonds of the marketable fungicides Zineb (Zinc ethane-1,2-diylbis(dithiocarbamate) and Maneb (Manganese ethylene-1,2-bisdithiocarbamate), the tin(IV)-sulfur bond in complex-6 (see Fig.2) reinforces its antifungal activity, but the toxic effect of this compound is probably due to by-products from decomposition in solution [27].

On the other hand, the tin(IV)-sulfur bond is not present in the active complexes 1, 2, 5, 9 and 10 (see Fig.2) according to the infrared spectroscopy [27]. In these compounds, the tin(IV) center is bonded to a nitrogen atom only. Consequently, this chemical bond is probably significant chemical feature to the fungi toxic effect of these organotin(IV) derivatives. Nevertheless, complex-13, a polymeric compound having the metal at the center of an octahedron as indicated by Mössbauer spectroscopy, was inactive regardless of the tin(IV)-nitrogen bond formation (see Fig.3) [28]. Because of this bond type and the polymeric character of 13, this compound was expected to show antimicrobial activity as the oil based tin polymers [29-30]. As a concluding remark, the biochemical interaction between these organotin(IV) compounds and the phytopathogens appears to be intrinsically related to the formation of a tin(IV)-nitrogen bond and the trigonal bipyramidal geometry. This observation corroborates with the fact that this geometrical arrangement is associated with the best results of antifungal effect.

The relationship between electronegativity and acid-base character of chemicals is recognized in the chemistry field. The chlorine atom (cb = 3.16) is more electronegative than the tin(IV) atom (cb = 1.96), according to Pauling (cb, b = polarizability) [31].

By increasing the number of chlorine atoms attached to the tin(IV), which is already electron deficient due to its oxidation state, the electron density at this metal center is likely to reduce even more due to the bond polarizability.

In this situation, an enhancing of the tin(IV) Lewis acid character is predictable. The bioassay data in Graph 2 demonstrate the correlation of that to the fungicidal activity. As the acid character of the metal precursor decreases, upon coordination of the bis(pyrimidin-2-ylthio)alkanes, the more significant the fungicidal effect becomes for the phytopathogens. The increasing Lewis acid character corroborates with the inactivity of the trichloride and tetrachloridetin(IV) derivatives (3, 4, 7, 8, 12 and 13). Therefore the acid character of the metal center in combination with the antifungal data let to postulate that this chemical property has an influence on the biochemical interaction between phytopathogens tested and the tin(IV)-bis(pyrimidin-2-ylthio)alkanes derivatives. 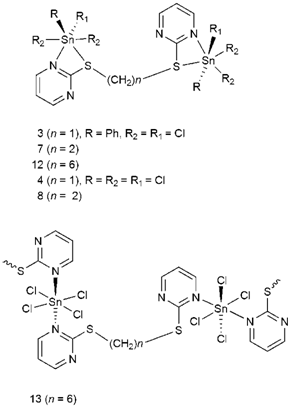 The bioassay was conducted by the use of the filter paper transfer (A) and food poison (B) techniques [16]. The fungal species used were Fusarium semitectum, Aspergillus flavus, Aspergillus ochraceus and Colletotrichum gloesporioides. The conidia of the phytopathogens were produced on freshly prepared standard PDA (Potato-dextrose agar) containing 100 mg L-1 of streptomycin sulphate to inhibit bacterial growth. The conidial suspension of each species was prepared by washing off the conidia from the agar surface, and then the concentration of conidia in the wash water was adjusted to 104 mL-1.

In the filter paper transfer technique (A), a PDA aliquot of 10 mL was poured into sterile 9 cm plastic culture plates. The organotin(IV) derivatives were dissolved in methanol at concentrations ranging from 50 to 3000 mg L-1, and an aliquot of 10 µl of the metal solution was imbibed into a 10 mm diameter sterile filter paper disc. The discs absorbed with methanol only were used as control. After evaporation of the methanol under a laminar flow hood, 10 µl of the desired conidial suspension was placed at the center of the discs that were transferred to the PDA culture plates and incubated at 25 oC. The presence or absence of fungal growth was examined after 48 hours. In case of no growth, the incubation period was extended to 7 days. The experiment was finished in triplicate, and repeated.

In the food poison technique (B), the methanol solution of the tin(IV) derivatives at the concentration of 80 and 400 mg L-1 was mixed with cool molten PDA and then poured into culture plates. The control plate was prepared by adding an equivalent amount of methanol only in PDA. After solidification, the medium was spot seeded in the center of the plate by placing 10 µl of the conidial suspension of the test fungus and then incubated for 8 days at 25 oC. Subsequently the colony diameter was measured and the percentage growth (pg) inhibition calculated by (1) where the diameter of the colony growth in the control plate is x, and y is the diameter of that in the substance test plate.

The bis(pyrimidin-2-ylthio)alkanes and the organotin(IV) derivatives were prepared and characterized by our research group [27, 28]. These compounds have the tin(IV) atom at the center of an octahedron as well as a trigonal bipyramidal arrangement., The pyrimidin-2-ylthioalkanes are coordinated by the monodentate, bridging bidentate and bridging tetradentate modes as shown in Fig. 1 and Fig. 2.

The best antifungal results were of the compounds having a tin(IV)-nitrogen bond in combination with a trigonal bipyramidal geometry. The bioassay data reveals that the microorganisms are vulnerable to the Lewis acid character of the organotin(IV)-bis(pyrimidin-2-ylthio)alkanes.

The authors would like to thank the Brazilian Agency CNPq for granting a scholarship to Fernanda A. Mendonça and FAPEMIG for financial support.