Thermodynamics of glycine in mixed solvents at 30O – 40O C

Amines in pure state are self associated through intermolecular hydrogen bonds. They are all electron donors which allow them to have specific interactions with other electron deficient molecules. The physical properties of the mixed solvents like ethanol + water, methanol + water, isopropanol + water, dioxane + water, glycol + water and glycerol + water viz. dielectric constant, dipole moments are very much different from that of water. These organic solvents are more or less aprotic. Water, the most commonly used solvent, is both polar and sustains hydrogen bonds. Water is both an electron donor and electron acceptor. These  and several other properties make a study of their aqueous mixture an interesting thing to explore particularly of the ionic processes accompanying the solution of strong electrolytes.

Fig.1 represents a 2-dimensional section of an idealized electrolyte solution. The ions are shown as spheres with unit electrical charge. The solvent (pale blue) is shown as a uniform medium, without structure. On average, each ion is surrounded more closely by ions of opposite charge than by ions of like charge. Conductivity is traditionally determined by measuring the AC resistance of the solution between two electrodes. Dilute solutions follow Kohlrausch's Laws of concentration dependence and additivity of ionic contributions. Lars Onsager gave a theoretical explanation of Kohlrausch's law by extending Debye–Hückel theory. 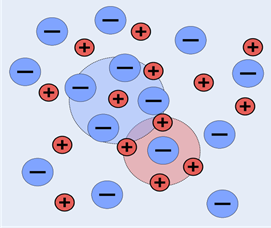 Fig. 1. An idealized representation of a solution of a 1:1 electrolyte

The electrical conductivity of a solution of an electrolyte is measured by determining the resistance of the solution between two flat or cylindrical electrodes separated by a fixed distance [8]. An alternating voltage is used in order to avoid electrolysis. The resistance is measured by a conductivity meter. Typical frequencies used are in the range 1–3 kHz. The dependence on the frequency is usually small, but may become appreciable at very high frequencies, an effect known as the Debye–Falkenhagen effect.

The salt used was of E-Merck’ extra pure variety. The purification of solvent, preparation of solvent and solution and measurement of the conductance has been described previously [3]. The conductance measurements were within accuracy of 0.002 and within the concentration range from 0.01 to 0.001 equivalent litre-1. The temperature of investigation was from 303 to 313 + 0.01 K.

The Onsager equation [1] for a completely dissociated electrolyte is

where A and B are independent of concentration of the electrolytes. It satisfactorily accounts from the change in the equivalent conductivities with concentration. Correct evaluation of Lo can be made by extrapolating to zero concentration of the line obtained by plotting Ù vs. C1/2. However the above method of extrapolation has been reported to the unreliable in case of a number of electrolytes involving incomplete dissociation or ion association. Davies has extended the Onsager’s equation and has tabulated the dissociation constants of a variety of salts, specially of higher valency type. Electrolytic conductivities have been used to study ion solvent interaction and salvation of various cations and anions in aqueous and non-aqueous solution.

The equivalent conductivity of glycine investigated weight % of ethanol, methanol, isopropanol, dioxane, glycol, glycerol (10, 20 and 30%) water mixture at 30-40oC and found to be almost linear with C1/2. The theoretical Slope (ST) calculated from the determined Ùo values for different electrolytes at different solvent composition have been obtained and compared with the experiment slope (S). Dielectric constants were calculated from the data of Akenlof and short, viscosities were determined experimentally. The ST and S values are almost in fair agreement and differ by 2 to 3%; Ùo values are given in table-1.

The Walden product [2] Ùoh0 (table 2) has been actually employed to study ion-solvent interaction in solution from conductivity data. The plot of Ùoh0 vs. t are found to be linear and is almost independent of temperature. Further the mere constancy of the Walden product at different temperature is most presumably due to compensating contribution of the temperature coefficient of the conductivity by the negative temperature coefficient of the viscosity of the solvent. The lesser the value of Ùoh0 the greater is the ion solvent interaction. Also electrostatic charge density of the ion plays an important role in inducing ion solvent interaction and salvation. It also appears that during these migration ions are covered with a sheath of solvent molecules resulting in a larger size of the solvodynamic unit, and a decrease in Ùoh0 (Table-2), so that the size of the solvated ions and the ion-solvent interaction is of the order ethanol + water > methanol + water: isopropanol + water > dioxane + water > glycol + water > glycerol + water is in agreement with the viscosity and apparent molar volume data. (To be published later).

Because of the use of aquo-organic solvents, the dielectric constant of the medium is lowered and there is more probability of ion-pair formation. Hence the method of Fuoss and Krauss [3] and that of Shedlovsky [4] have been utilized to calculate the dissociation constant and Ùo simultaneously; K values calculated by both the methods are in good agreement and are recorded in table-3. The K values decrease with the decrease in dielectric constant, i.e. with increase in non-aqueous solvent.

The standard thermodynamic parameter DGo and DSo have been calculated in the usual manner. The plots of DGo and DSo vs. solvent composition are found to be linear. The extrapolated values give the thermodynamic parameter for water. The standard thermodynamic quantities (DGto and DSto) for transfer process for water from water to 10, 20 and 30% of organic solvent + water have been calculated by using Feakin’s and Tuner’s[5] method. DGto values are tabulated in table-7 and 8. The DGto values are all negative, which indicates that the ion pairs are in a lower free energy state in aquo-organic solvent than in water and hence the ion pair formation is favoured by decreasing the dielectric constant of the medium. Since single ion values of free energies are not available presently for the solvent mixtures studied, the method adopted by Khoo [6] is followed to study ion solvent content is increased. It is possible to split the DGto values into two parts as suggested by Roy et al. [7] i.e. chemical contribution denoted in their terminology by DGot (Ch) and an electrostatic contribution DGot (el), which has been calculated from the Born equation:

where r+ and r- are the crystallographic radii of the

can be evaluated from the simple empirical equation :

in which q is a constant characteristic of the medium, so equation may be written as :

The DSot (Ch) is also negative in all cases indicating chemical interaction and is of the order:

The reasons for this behaviour are as follows:

Ethanol, methanol and isopropanol have got one –OH and water is both an electron donor and acceptor. Hence, the former could accept a proton from water and hence the three dimensional water structures are easily broken down.

The addition of a small amount of dioxane to water may give rise to two effects; if the dioxane is accommodated in the solvent structure, it may strengthen the water structure because dioxane is a proton acceptor. If it cannot be accommodated because of its bulky size then it may cause a breakdown in three dimensional water structures. Several authors have observed that dioxane + water is less ordered than pure water. It is observed that DE and DG increase with increase in dioxane content and hence the three dimensional water structure is broken down though the quanta are less than that of ethanol and methanol + water mixtures.

Glycol has got two –OH groups and glycerol has got 3-OH groups. So it should have more tendencies to break hydrogen bond more readily than methyl alcohol and ethyl alcohol, but the reverse is seen to be true. This is probably due to the low ion solvent dipole interaction energy which is unable to break the strong intermolecular hydrogen bond.