Screening Nigerian Kaolin for Use as Potential Sources of Geopolymer Materials

For many years, incidents of building collapse have been wreaking havoc on hapless Nigerians. Many people have been sent to their untimely graves, other, though survived such catastrophes, are maimed for life just as properties worth billions of naira have been lost. The cause of many of the building that collapse has been attributed to use of inferior materials, poor concrete mixes and high cost of Portland cement[1].

Also, emission of CO2 from cement production is increasing at a much more rapid rate than all other industrial sources put together [2].

The international and national scientific community began to address the economical and environmental problems associated with Portland cement manufacturing sometimes ago; consequently, scientists have been working on a design for new binders for many years  and these searches have led to the birth of geopolymer among others as an alternative to Portland cement.

Glukhovsky [3] made a significant breakthrough in understanding the principle underlying the production of alkali-activated binders from low calcium clay and alkaline metal solutions which he called these binders or "soil cements" and the respective concretes "soil silicates". Davidovits in 1982 produced binders by mixing alkali solution with thermally activated kaolinite, limestone and dolomite which was termed "geopolymer" because of their polymeric structure [4].  This binder has generated a number of trademarks such as Pyrament, Geopolycem and Geopolymite. Other names have been coined by other authors: hydroceramics (Grutzeck), inorganic polymers (van Deventer) and zeocements (Palomo) [5].

The gradually growing knowledge based on alkali–activated cements and concretes has cast light not only on their benefits in terms of low energy costs and environmental impact, but also their good mechanical performance and long durability, such as Interior of modern aircraft which make use of fire-resistant properties of geopolymer composites [6,7,8].

The present study was conducted to screen Nigerian kaolinite clay for synthesise of geopolymer binders. The objectives include determination of suitable alkaline environment for the synthesis, evaluation of mechanical and durability properties through compressive strength and water absorption measurements. 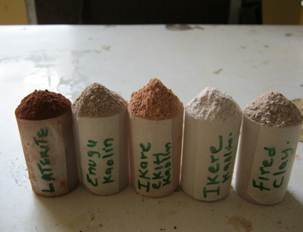 Ÿ Metakaolins used in the synthesis of geopolymers were obtained by calcining the sourced kaolins at 700◦C for 5 hours [12].

Ÿ Freshly distilled water obtained from FIIRO was used throughout the research.

Solution of sodium hydroxide pellets of required concentration was prepared 24 hours prior to casting. Sodium silicate solution was used in raw form without any modification. Both solutions were mixed together at the time of casting only when necessary.

Water absorption test[10] was based on NEN-EN 14223.The  geopolymers were weighed (M1) and then immersed in water for 7 days ± 4 hours at (23 ± 3)°C. The entire areas of the geopolymers were covered with water during the entire test period. After 7 days of immersion in water, the immersed geopolymer sample was taken out, placed on a flat board and air dried for 5hours ± 5 minutes at room temperature. The test samples were reweighed after the drying step (M2) [10,13]. Figure 2 shows the picture of geopolymer binders immersed in water. 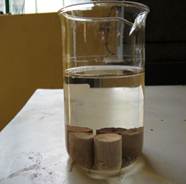 (ii) Expression of Results and Calculation

The water absorption W for each geopolymer test specimen (expressed as a percentage by mass) was calculated using the equation below.

W is water absorption of geopolymer test sample expressed as percentage by mass.

M1 is the mass of the test specimen after drying.

The results of the average compressive test measured from two cylindrical shaped geopolymer for each set are listed and compared in Figure 3, 4 and 5 below. 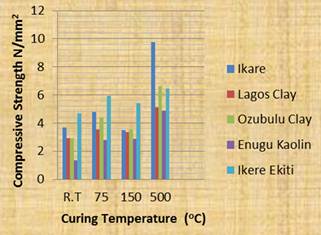 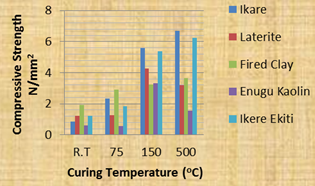 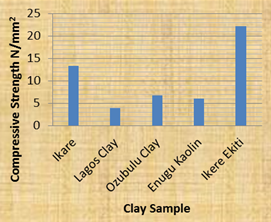 Figure 5. Compressive Strength of Clay Samples Activated with Sodium Silicate and Sodium Hydroxide in Ratio 1:1 and Cured at 150oC.

The results of compressive strength are presented in Fig. 3 and 4. Compressive strength of geopolymers activated with ratio 1 to 1 activators (sodium silicate and water) is higher than that which was activated with activators at 1 ratio 0.5. This is likely due to the fact that water plays a significant role in the hydrolysis of the of the silicon and aluminum species of the raw materials. Nigerian clay samples activated with both sodium silicate and 14M NaOH in ratio one to one, cured at 150oC showed rapid increase in compressive strength (Fig. 5). The sharp increases in compressive strength of these clays was due to addition of sodium hydroxide (NaOH) solution which promote the dissolution and hydrolysis  of the soluble aluminosilicate species of the raw materials. NaOH also raises the rate of strength development as well as largely enhance the final strength by providing more alkaline environment for the geopolmerization.

Water absorption test performed showed that all the samples have good water absorption capacity at different conditions when compared with ASTM Specification Standard for water absorption, except Enugu kaolin and Ozubulu clay which did not satisfied the ASTM requirements at room temperature and at 75oC.

The following conclusions were drawn from the study on Nigerian clay based geopolymer binder:

From water absorption test performed, it can be observed that all the samples have good water absorption property at different conditions when compared with ASTM Specification Standard for water absorption, except Enugu kaolin and fired clay which did not satisfied the ASTM requirements at room temperature and 75oC.

We appreciate Federal Institute of Industrial Research Oshodi (FIIRO) for providing laboratory support to carry out this research.