Abstract: N,N-Dimethylformamide (DMF) is a ‘universal’ solvent and has wide variety of applications in organic synthesis, purification, crystallization, and as cross-linking agent. The aim of this study was to evaluate the physicochemical and spectroscopic properties of DMF after the biofield energy treatment using various analytical techniques. DMF sample was divided into two parts, one part (control) remained as untreated, while the other (treated) part was treated with Mr. Trivedi’s biofield energy treatment. The treated sample was subdivided into three parts named as T1, T2, and T3 for gas chromatography-mass spectrometry (GC-MS) analysis. Five relatively intense peaks were observed in the mass spectrum of both control and treated samples of DMF. The GC-MS data revealed that the isotopic abundance ratio of (PM+1)/PM in DMF was slightly decreased by 5.76% in T1, and increased by 48.73%, and 30.17% in T2, and T3 samples, respectively as compared to the control [where, PM- primary molecule, (PM+1)- isotopic molecule either for 13C or 2H or 15N]. Similarly, the isotopic abundance ratio of (PM+2)/PM was decreased by 10.34% in T1 and then increased upto 43.67% (T2) as compared to the control [where, (PM+2)- isotopic molecule for 18O]. In high performance liquid chromatography (HPLC), the treated DMF showed similar retention time (TR) as compared to the control with an additional small peak at 2.26 min appeared in the treated sample. In DSC thermogram the heat change in a sharp endothermic transition at around 61°C of treated DMF was increased by 152.56% as compared to the control. Further, C=O and C-N stretching frequencies of treated sample were shifted by 7 cm-1 and 3 cm-1, respectively towards low energyregion in Fourier transform infrared (FT-IR) spectroscopy. These results suggested that biofield energy treatment has significantly altered the physical and spectroscopic properties of DMF, which could make them more stable solvent in organic synthesis and as a suitable formulation agent in polymer/paint industry.

N,N-Dimethylformamide (DMF), is a colorless organic liquid with slight amine odor. It is a highly polar aprotic solvent extensively used in the organic synthesis [1], paint, and coating formulations [2]. Its attractive solvent properties are due to the high dielectric constant, wide solubility range, and less volatile nature. The high solubility of polyacrylonitrile in DMF [3] and high miscibility of DMF in water makes it the ideal solvent in acrylic fiber production. Also, the synthesis of polyurethane and some other polyurethane based elastomers is performed in DMF based solvents [4]. It has an important role in the synthesis of active pharmaceutical ingredients (API) as a solvent [5] and as a co-solvent in the crystallization of drug molecules. For instance, piroxicam is soluble in DMF and after addition of a bridging liquid like chloroform, enables the diffusion of the drug to a third emulsified phase in which the drug molecule agglomerates to grow spherical crystals [6]. Further, as a solvent DMF is used in the production of polyurethane coated textiles, in the production of synthetic fibers (~10%) [7], as gas stabilizer in acetylene cylinders [8], in the production of medical devices [9], as cleaning solvent, as laboratory chemical etc. [10]. DMF is also used in epoxy based formulations [11]. Despite its usabilities, it has some toxic effect on the environment also. However, it decomposes into dimethyl amine and formaldehyde as a result of UV irradiation or hydrolyzed in aqueous solution and at elevated temperature in the presence of alkali or acid, limiting its practical applications [12].

The stability issue associated with DMF can be addressed by an alternative mean. Nowadays, biofield energy treatment is known to alter the various properties of living and non-living things [13,14]. The biofield is the energy fields that purportedly surround and penetrate the human body. Human has the ability to harness the energy from environment/universe and can transmit into any object around the Universe. After receiving the energy, the object or living thing(s) used to respond in a useful way. This process is known as biofield treatment [15]. National Centre for Complementary and Alternative Medicine (NCCAM) have reported that energy therapies are commonly used to promote the health and healing and are popular in subgroup of energy medicine among complementary medicines [16,17]. People in western countries practice biofield healing therapy as certain form of Complementary and Alternative Medicine (CAM) [18]. Mr. Trivedi’s unique biofield treatment is also called as The Trivedi Effect®. The impact of the Trivedi Effect has been well studied in various research fields like material sciences [19, 20], agricultural [14,21], and microbiology research [22]. Hence, based on the outstanding results achieved by the biofield energy treatment an attempt was made to evaluate the effect of biofield energy treatment on DMF.

DMF was procured from Qualigens, India. The compound was distributed into two groups, where one part was referred as control and the other as treated group. The biofield energy treatment was received by the treated group in sealed pack from Mr. Trivedi under standard laboratory conditions. The control and treated samples were characterized using gas chromatography-mass spectrometry (GC-MS), high performance liquid chromatography (HPLC), differential scanning calorimetry (DSC), and Fourier transform infrared (FT-IR) spectroscopy.

The GC-MS analysis was done on Perkin Elmer/auto system XL built with Turbo mass, USA. The detection limit of the detector is upto 1 picogram. For GC-MS analysis, the treated sample was further divided into three parts as T1, T2, and T3. The GC-MS spectrum was plotted as the % abundance vs. mass to charge ratio (m/z). The isotopic abundance ratio of 13C/12C or 2H/1H, (PM+1)/PM, and 18O/16O, (PM+2)/PM was expressed by its deviation in the treated sample as compared to the control. The percentage changes in isotopic ratio (PM+1)/PM and (PM+2)/PM was calculated from the Equation (1):

Where, RTreated and RControl are the ratio of intensity at (PM+1) to PM in mass spectra of treated and control samples, respectively.

The HPLC was performed on a Knauer High Performance Liquid Chromatograph (Berlin, Germany), equipped with Smartline Pump 1000 and a UV 2600 detector. Chromatographic separation was performed on a C18 column (Eurospher 100) with a dimension of 250 x 4 mm and 5 µm particle size. The mobile phase used was methanol with a flow rate of 1 mL/min at 25°C.

The DSC analysis was done with Perkin Elmer/Pyris-1, USA, a heating rate of 10°C/min and nitrogen flow of 5 mL/min was used. The change in latent heat (ΔH) of control and treated ethanol was recorded from their respective DSC curves. The percent change in boiling point and latent heat of vaporization was calculated using equation (2):

Where, T Control and T Treated are the peak point of degradation of control and treated samples, respectively.

FT-IR spectra were acquired from Shimadzu’s Fourier transform infrared spectrometer (Japan) in the frequency region of 500-4000 cm-1. The samples were prepared by mixing with spectroscopic grade KBr into fine powder and then pressed into pellets.

The mass spectra of control and treated samples (T1, T2, and T3) are showed in Figure 1. There were five major peaks observed in the control sample i.e. at m/z= 73, 58, 44, 28 and 18. These peaks mainly due to DMF molecular ion peak and fragmented peaks of the following ions: C3H7NO+, C2H4NO+, CH2NO+, CH2N+and NH4+respectively. Mass spectra showed PM peak at m/z = 73 in control and all the treated samples of DMF at same intensity. The GC-MS spectra of control DMF is well matched with the reported literature [23]. The treated samples (T1, T2, and T3) were fragmented and appeared in the mass spectra with different intensities (except PM) as compared to the control. 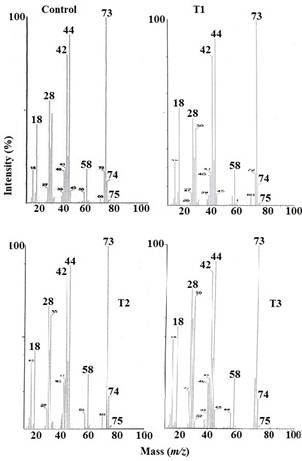 Figure 1. GC-MS spectra of control and treated samples of DMF. 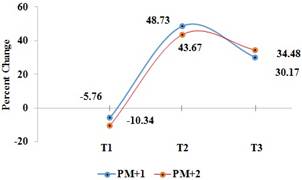 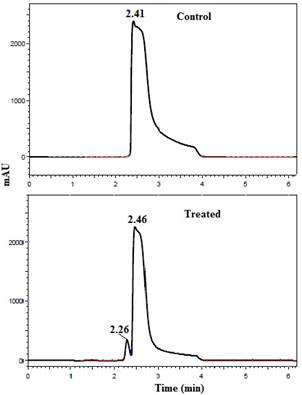 Figure 3. HPLC chromatograms of control and treated sample of DMF.

In the HPLC chromatogram, the intensity vs. retention time of control and treated DMF is plotted as shown in Figure 3, of control and treated DMF. The control sample showed a single peak in the chromatogram, while two separate peaks were observed in the chromatogram of the treated sample. The retention time (TR) of control sample was 2.41 min with relative intensity 99.86%, however, the TR of treated DMF showed peak at 2.26 min and 2.46 min with relative intensities 13.03% and 84.14%, respectively. The slight increases in the TR of the highest intense peak may be attributed to the decreased polarity of DMF after biofield energy treatment. The splitting of the treated DMF peak in the chromatogram is not clearly understood, however this may be due to the impurity with the sample or may be from the solvent.

The FT-IR spectra of control and biofield energy treated DMF are showed in Figure 5. The vibrational peak at 2932 cm-1 was assigned to aliphatic C-H stretching of the methyl groups. Peaks in the range of 1689 cm-1 to 1661 cm-1 in the control and treated samples were assigned to C=O stretching vibration. 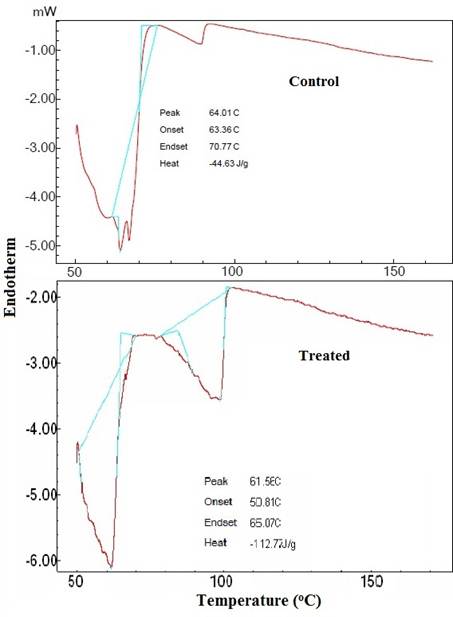 Figure 4. DSC thermograms of control and treated samples of DMF. 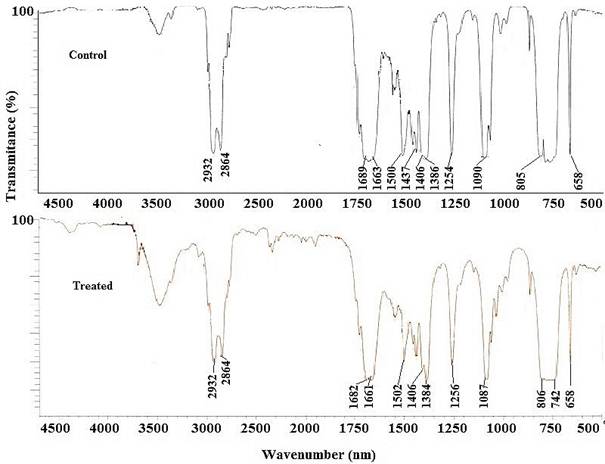 Figure 5. FT-IR spectra of control and treated samples of DMF.

The peak at 1689 cm-1 was shifted by 7 cm-1 to 1682 cm-1 and the peak at 1663 cm-1 was shifted by 2 cm-1 to 1661 cm-1after biofield energy treatment. In addition, the peak assigned for C-N stretching at 1090 cm-1 in the control sample was shifted by 3 cm-1 to 1087 cm-1in the treated sample of DMF. In both the cases, we have observed a shift of frequencies towards the low energy region. There are two possible reasons for this to happen: force constant may be decreased or reduced mass (µ) may be increased or both [26]. From the GC-MS analysis, it was found that the number of heavier atoms increased significantly and well supported by isotopic abundance ratio. It is assumed that due to the increased isotopic abundance ratio of (PM+1)/PM and (PM+2)/PM in treated DMF, the effective mass (µ) increased and eventually wavenumber decreased. The FT-IR results after biofield treatment as compared to the control, had shown changes in structural properties of the molecule except, the C-H stretching frequencies, which may lead to the changes in polarity of the treated DMF sample.

DMF was studied under the influence of biofield energy treatment and significant changes were observed in both physical and chemical properties of the molecule. The isotopic abundance ratio of (PM+1)/PM and (PM+2)/PM in DMF was significantly increased up to 48.73%, and 43.67%, respectively as compared to the control. The alteration of isotopic ratio after biofield energy treatment has a significant impact on the bond energies and the chemical stability of the molecule. The slight increase in retention time may be due to the decreased polarity of treated DMF sample as compared to the control in the HPLC chromatogram. The significant heat change during the sharp transition at 61°C in the DSC thermogram up to 152.56% also indicated the enhanced stability of the treated DMF. These results also supported by the FT-IR spectra, where C=O and C-N vibrational frequencies were shifted to lower energy region may be due to the increased effective masses. It is assumed from the results that the increased isotopic abundance ratio of (PM+1) and (PM+2) after Mr. Trivedi’s biofield energy treatment on DMF, that could result in the reduction of hydrolysis and photooxidation reactions initiated at elevated temperature, and in the presence of light and pH.

The authors would like to acknowledge the whole team from the Sophisticated Analytical Instrument Facility (SAIF), Nagpur for providing the instrumental facility. We are very grateful for the support from Trivedi Science, Trivedi Master Wellness and Trivedi Testimonials in this research work.