The naphthalene and naphthols that have been used commercially are most commonly petroleum products and byproducts of various combustion processes. They play an important role in the chemical industry and in production of pharmaceuticals. They are moderately toxic to the environment [1]. Petroleum and coal are the main sources of naphthalene, however burning tobacco or wood also produces naphthalene. The major commercial use of naphthalene is in the manufacturing of polyvinyl chloride (PVC) plastics. Several naphthalene containing drugs are available in the market, such as nafcillin, naftifine, tolnaftate, terbinafine, etc., which play a vital role to as antimicrobials [2]. Naphthalene is a raw chemical for industrial synthesis, in particular of phthalic anhydride [3]. Besides, naphthalene has moderate toxic property while exposed to human and other living organisms and its high concentration may cause haemolytic anaemia [4]. Naphthalene is rather unreactive, it reacts more readily than benzene, for instance, with the electrophilic and hydrogenating agents [5]. 2-naphthol is a naphthalene derivative, prepared from the corresponding naphthalene sulphonic acid. It is used as an intermediate for the production of odor agents, pharmaceuticals, dye-stuffs, fungicides, and as insecticides [6]. The naphthalene derivatives are also used as an antioxidant for rubber, plastic, grease and lubricants. Faizul et al., have found naphthalene ring as an active antibacterial constituent in 2- naphthol and azo 2-naphthol to show antimicrobial activity against Staphylococcus aureus and Escherichia coli [7]. Literature data indicates that both naphthalene and 2-naphthol have moderate concern for environmental toxicity, low concern as Persistent Organic Pollutants (POP) [8], moderate apprehension for skin and eye irritation, carcinogenicity and low concern for mammalian toxicity.

The distribution of contaminant sources of any molecule on a native or global scale can be understood by determining the isotope abundance ratio and characterization of elementary reaction mechanisms. Moreover, phonon-related properties such as thermal conductivity, thermal expansion, and melting temperature are expected to alter which is dependent upon isotope mass [9]. The rate of chemical reaction depends on the mass of the nucleus with different isotopic substitutions, which slightly affect the partitioning of energy within the molecules. These deviations from perfect chemical equivalence are termed as isotope effects. The isotopic abundance ratio is commonly reported in terms of atom percent [10].

Both of the naphthalene derivatives taken for mass spectrometric study are photosensitive and moderately hazardous. The stability could be enhanced by Mr. Trivedi’s unique biofield energy treatment which is already known to alter the physical and structural properties of various living and non-living substances [11]. The National Center for Complementary and Alternative Medicine (NCCAM), which is part of the National Institute of Health (NIH), has recommended the use of Complementary and Alternative Medicine (CAM) therapies in the health care sector and about 36% of Americans regularly use some form of CAM [12]. CAM includes numerous energy-healing therapies, in which biofield therapy is a form of putative energy medicine that is being widely used worldwide to improve the overall health and well-being of human beings. When an electrical signal passes through any material, a magnetic field is generated in the surrounding space [13]. Humans have the ability to harness energy from the environment/universe and can then transmit it to any object (living or non-living) around the globe. This process is called biofield energy treatment. Mr. Trivedi’s unique biofield energy treatment is also called The Trivedi Effect®, which is known to alter the physical, structural and atomic properties in various metals [14-16] and ceramics [17, 18] in materials science and in microbiology research [19]. Based on the outstanding results achieved by the biofield energy treatment on metals and ceramics, an attempt was made to evaluate the effect of biofield energy treatment on the isotopic abundance ratio of 13C/12C or 2H/1H (PM+1)/PM and 18O/16O (PM+2)/PM in naphthalene and 2-naphthol.

Both naphthalene and 2-naphthol were procured from S. D. Fine Chem. Ltd., India. Each of the samples was distributed into two parts, where one part of each sample was referred as control sample and the other part was considered as treated group. The treated group of each sample was handed over to Mr. Trivedi for biofield energy treatment in a sealed pack and under standard laboratory conditions. Mr. Trivedi provided the treatment through his energy transmission process to the treated group without touching the samples. The control and treated samples of naphthalene and 2-naphthol were characterized using Gas Chromatography-Mass Spectrometry (GC-MS). 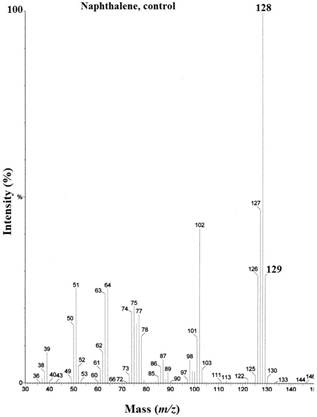 The gas chromatography-mass spectroscopy (GC-MS) analysis was performed on Perkin Elmer/auto system XL with Turbo mass, USA, having detection limit up to 1 picogram. For GC-MS analysis the treated sample was further divided into four parts as T1, T2, T3 and T4. The GC-MS data was obtained in the form of % abundance vs. mass to charge ratio (m/z), which was known as mass spectrum. The isotopic abundance ratio 13C/12C or 2H/1H (PM+1)/PM and 18O/16O (PM+2)/PM was expressed by its deviation in treated samples as compared to the control. The percentage changes in isotopic ratios (PM+1)/PM and (PM+2)/PM were calculated on a percentage scale from the following formula:

Where, RTreated and RControl are the ratio of intensity at (PM+1) to PM in mass spectra of treated and control samples respectively. 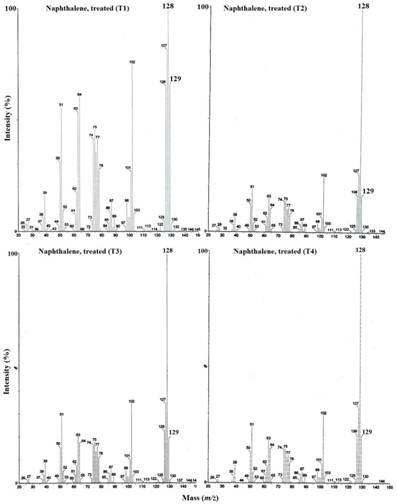 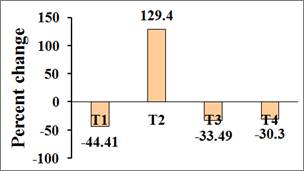 Figure 3. Percent change in the isotopic abundance (PM+1)/PM of naphthalene under biofield energy treatment as compared to the control.

Atoms in chemical bonds with higher isotopic number have higher binding energy with increased effective mass (µ) and vice versa. Thus, the increased isotopic abundance ratio of (PM+1)/PM in T2 samples of naphthalene and 2-naphthol, might increase the effective mass and binding energy after biofield energy treatment that may significantly enhance the chemical stability of naphthalene derivatives. 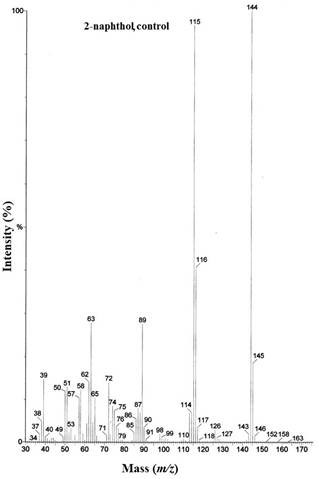 If a lighter nucleus is replaced by a heavier one, then corresponding effective mass (µ) of that particular bond increased. Some probable bonds are presented that might present in control and treated samples such as 12C-12C, 1H-12C, 13C-12C, 2H-12C, 1H-13C, 12C-18O, 1H-18O,13C-16O and 2H-16O. The effective mass is calculated and presented in Table 3. The result showed that µ of normal 12C-12C (µ = 6), 1H-12C (µ = 0.923), and 1H-16O (µ = 0.941) bonds are higher in case of heavier isotopes (i.e. 13C-12C = 6.26, 2H-12C = 1.71 and 2H-16O = 1.77) respectively. The isotope abundance ratio of (PM+1)/PM in treated samples of naphthalene and 2-naphthol was first decreased by ~40% in T1 sample as compared to the control. This was increased up to 129.4% and 165.4% in treated T2 samples in naphthalene and 2-naphthol, respectively. Both naphthalene and 2-naphthol, in treated T2, maximum number of isotope replacement might occur whereas, in treatment T1, reverse phenomena was observed. After biofield energy treatment in T2 sample, bond strength, stability, and binding energy of naphthalene and 2-naphthol molecules might be increased due to the higher effective mass (µ) however these parameters might be decreased (~35%) in treated T1, T3 and T4 samples of naphthalene molecule. 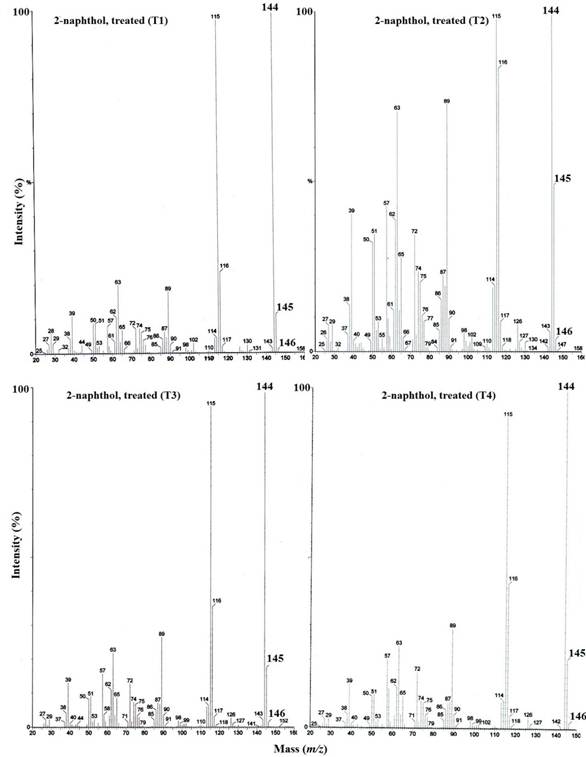 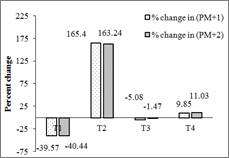 Figure 6. Percent change in the isotopic abundance of (PM+1)/PM and (PM+2)/PM of 2-naphthol under biofield energy treatment as compared to the control.

In summary, naphthalene and 2-naphthol were studied under the influence of biofield energy treatment and significant change in isotope abundance of 2H, 13C, and 18O in treated samples as compared to the control was observed. The percent change in isotope abundance ratio of 13C/12C or 2H/1H in treated naphthalene was increased up to 129.40% as compared to the control. However, the isotope abundance ratio of 13C/12C or 2H/1H and 18O/16O in 2-naphthol was increased up to 165.40% and 163.24%, respectively for treated samples. Similar trend was observed in changing the isotopic abundance ratio from T1 to T4 samples of both the molecules after the biofield energy treatment. The increased isotopic abundance ratio after biofield energy treatment (T2) of naphthalene and 2-naphthol molecules may increase the bond stability which will reduce photosensitive reactions initiated by heat, light and molecular oxygen.