Application of Photocatalytic Reduction Method with TiO2 for Gold Recovery

Abstract: For replacing the un-ecofriendly gold recovery methods, photoreduction catalyzed by TiO2 is proposed as an environmentally benign alternative method for gold recovery. In this study, the photocatalytic reduction was carried out by batch technique, in which the influences of reaction time, TiO2 photocatalyst dose, and initial Au(III) concentration were evaluated to get the optimal condition. In addition, the influence of Ag(I), Cu(II), and Fe(III) that are usually found along with gold in the gold mineral is also studied. The research results indicate that the effective Au(III) photoreduction catalyzed by TiO2 has produced brown solid powder of gold element. It is also found that the effectiveness of Au(III) photoreduction is controlled by reaction time, Au(III) initial concentration, and photocatalyst dose. Furthermore, the presence of Ag(I) and Cu(II) ions leads to the gold photodeposition decreased, meanwhile the presence of Fe(III) ion can enhance the photoreduction. It is clear that photocatalytic method is a promising method for gold recovery, with respect to the easiness, cheapness, and eco- friendliness.

Gold (Au) is well known as a high valuable metal, forcing a lot of peoples from ordinary communities to big companies to explore and recover it. In Indonesia, gold core minerals are widely found and have been explored intensively. The well known gold extraction methods are amalgamation and cyanidation [1]. Amalgamation using mercury is more frequently used because it is practically simple and effective. However, this method always releases mercury containing wastewater in high level that contaminate environment including air and rivers. Since mercury is toxic pollutant, pollution by mercury could destroy the environment and consuming food and drinks contaminated by mercury can lead to several serious health problems [2-3]. The other gold extraction method called cyanidation uses cyanide salt. At the end of the process, the waste water containing cyanide complex compounds is always resulted. The cyanide complex compound in the acid solution will form volatile high toxic cyanide acid, which is also toxic for people and the environment [2-3]. It is clear that both methods for gold extraction are hazard for people and environment. Therefore, an afford to develop alternative environmentally benign methods is strongly required.

In the hydrochloride solution, gold is usually formed as ion AuCl4-, that is easy to be reduced into Au0 or gold metal, indicated by its high reduction potential, i.e. 1.04 V [4]. Accordingly, various types of reduction methods have been explored for gold recovery, including electrolysis [5], adsorptive-reduction [6-9], and bioreduction and biorecovery [10-13].

The other potential reduction method is photocatalytic reduction, which is a simultaneous reduction using UV light and sensitized with semiconductor photocatalyst such as TiO2 [14]. Such method has been intensively studied to detoxify Cr(VI) [15-17], Hg(II) [18-19], Cu(II) [20-21] as well as to recover Ag(I) [22]. Moreover, the method has also been assesed for gold photodeposition [23], but very limited publication is searched.

In this paper, gold photodeposition from Au(III) solution by photocatalytic reduction in the presence of TiO2 is reported. The influence of some operating factors such as photoreduction time, photocatalyst dose, and Au(III) initial concentrations, is systematically evaluated. In addition, the effect of the presence of Ag(I), Cu(II), and Fe(III) that are usually found along with gold in the mineral is also examined.

The chemicals used were TiO2, Au(NO3)3, AgNO3, Cu(NO3)2, Fe(NO3)3, HCl, and NaOH pellet in analytical grade purchased from E.Merck and used without any purification.

Photocatalytic reduction of Au(III) solution was carried out in a closed equipment installed with a 40 watt UV lamp having wavelength in the range of 290-390 nm, as illustrated by figure 1. The reaction was performed by irradiating 50 ml nitrate solution of 50 mg/L of Au(III) ions mixed with 25 mg TiO2 powder, with UV light accompanied by magnetic stirring for 24h. The mixture was filtered and the solution obtained then was analyzed by Perkin-Elmer AAS to determine the concentration of the unreduced Au(III) ions. By subtracting the initial Au(III) concentrations with the unreduced one, the amount of Au(III) photoreducted could be calculated. The gold resulted from the photoreduction was also confirmed by scanning electron microscope (SEM). 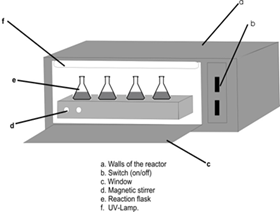 Fig. 1. A set of equipment for phoreduction.

In this study, the influences of photoreduction time, TiO2 dose, and initial concentration of Au(III) in the solution, and the presence of Ag(I), Cu(II), and Fe(III) were also systematically studied, by varying the variables, as presented in Table 1.

Table 1. The variations of the variables studied.

3.1. The Influence of TiO2 Photocatalyst

The effectiveness of Au(III) taken from the solution by using three different condition processes is shown in Fig.2. It is seen in the figure that by irradiating the solution, Au(III) ions in the solution can be taken out although with low effectiveness. In this process, Au(III) ion is reduced into Au(0) or gold elemental by electron released from water photolysis as written in eq.1. 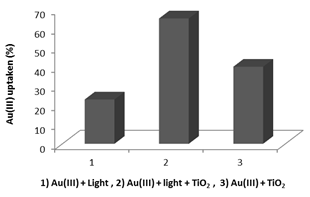 Fig. 2. The uptaken of Au(III) from the solution by different processes.

The water photolysis takes place very slowly [24] giving very few electrons. This explains the low effectiveness of the photoreduction. Furthermore, the figure also exhibites the significant improvement of Au(III) photoreduction when the process was added with TiO2. Due to its structure, TiO2 can release electron effectively during the light exposure [14,24,25], as written as eq.2. This condition may provide more number of electrons that promote the high effectiveness of the photoreduction. The photocatalytic reduction of Au(III) by TiO2 is written as eq.3.

Figure 2 also demonstrates that the process with TiO2 but without light (dark condition) can take the Au(III) out from its solution in lower amount compared to the process with light and TiO2. The Au(III) taken out from the solution may occur through adsorption mechanism, because in the dark condition no electrons for reduction, are available. The adsorption takes place on the surface of TiO2 through entrapment on the dangling bonds and/or via electrostatic interaction [26] . It is clear that in the photocatalytic gold reduction is initiated and/or accompanied by adsorption, that is continued by photocatalysis reduction of the Au(III) adsorbed [25,27,28].

3.2. The Influence of the Photocatalyst Dose 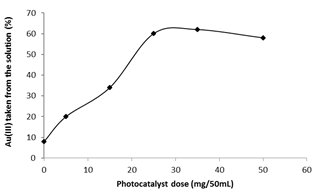 3.3. The Influence of Photoreduction Time 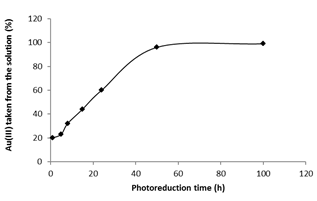 Fig. 4. The influence of the photoreduction time.

When the reaction time was further extended, high amount of gold has already been photodeposited and covered the surface of TiO2 photocatalyst, causing less active photocatalysis. This explains why the Au(III) photoreduction remains constant.

3.4. The Influence of Initial Au(III) Concentration 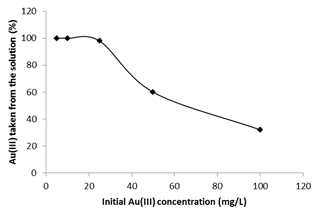 3.5. The Influence of Ag(I), Cu(II), and Fe(III) Ions in Gold Photodeposition

In the gold core, gold element is always accompanied with other metals including silver, copper, and iron. For gold photodeposition, the gold core has to be digested in strong acid that make the metal presence are dissolved to form Au3+, Ag+, Cu2+, and Fe3+ ions. The metal ions are known as reducible ions [4], that may influence on the gold photoreduction. Accordingly, the influence of the three metal ions on the gold photodeposition is also studied. In the solution studied, the concentration of all ions are arranged to be same, that are 50 mg/L and the results are illustrated by figure 6.

The figure illustrates that the presence of Ag(I) and Cu(II) lead to a decrease in Au(III) photoreduction, and the effect of Cu(II) is stronger than Ag(I). Meanwhile the photoreduction is enhanced when Fe(III) is present. Both Ag(I) [22] and Cu(II) [20-21] can be photoreduced, assigned by respective standard reduction potentials as much as 0.799 V and 0.34 V, to form Ag(0) and Cu(0) respectively, that creates competition to Au(III) photoreduction. Based on their standard reduction potential, it is known that Ag (I) is easier to be reduced than Cu(II) is, that should give larger effect, but the opposite data is observed. In addition the standard reduction potential of Cu(II) is much lower than that of Au(III), implying that reduction of Cu(II) is more difficult that should not give effect on Au(II) photoreduction. It is clear that the stronger effect shown by Cu(II) on decreasing Au(III) photoreduction is not caused by competition in the photoreduction, but is prominently caused by adsorption of Cu2+ on the surface of TiO2, as also reported by Wahyuni, et al, [17]. As presented previously, the photocatalytc reduction process is always initiated and/or accompanied with adsorption of Au(III) ions on the surface of TiO2. When Au(I) in the solution is along together with Ag(I) and Cu(II) ions, the adsorption of the three ions should be involved. The ion of Cu(II) having smaller size, [29], can be adsorbed faster either than Au (III) and Ag(I). Consequently, the adsorption of Au(III) is inhibited by Cu(II), causing a decrease in the Au(III) adsorption, and so the lower photoreduction. 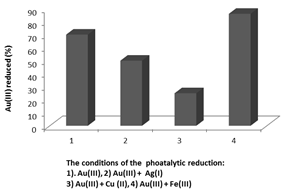 Fig. 6. The influence of other metal ions on the photoreduction.

In the case of Ag(I) interference, based on their size, the adsorption of Ag(I) may be comparable with that of Au(III) ions causing low competition [29]. In addition, the reduction potential of Ag(I) is relatively large, but it is still smaller than that is belonged to Au(III). The low competition in the adsorption and slight smaller reduction potential of Ag(I) explain the lower effect of Ag(I) on decreasing Au(III) photoreduction.

The role of Cu(II) in the depressing Au(III) photoreduction caused by adsorption competition is supported by data obtained from a process without light exposure or in the dark condition as illustrated by Fig.7. It is seen in the figure that adsorption of Au(III) sharply decreased in the presence of Cu(II), but only slightly decreased when Ag(I) is present. The small effect of Ag(I) in Au(III) adsorption may be caused by similar size of both ions.

The interesting phenomena appears regarding the improvement of Au(III) photoreduction in the presence of Fe(III). This ion is also reducible into Fe(II) which is supposed to be a competition for Au(III) photoreduction, but the opposite data is observed. The reason may be explained as follows. Fe(III) is reduced into Fe(II) ion with the reduction potential as 0.59 V, and Fe(II) is easily oxidized back to form Fe(III) [18]. The oxidation of Fe(II) involves OH radicals formed by H2O as a media and TiO2 photocatalyst during UV light exposure. The attachment of OH radicals can prevent the recombination of the OH radical and the electron [24], that keeps the electron in large number. This large number of the electrons should promote the high photoreduction of Au(III). 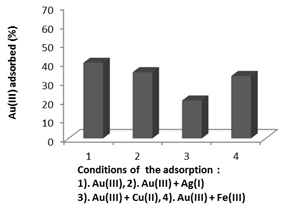 Fig. 7. The influence of other metal ions on the adsorption.

It can be concluded that reduction of Au(III) ions in the solution with illuminated TiO2 photocatalyst has effectively produced gold metal photodeposited on the surface of TiO2. The yield of the photoreduction is influenced by the illumination time, photocatalyst dose, and initial Au(III) concentrations. The presence of Ag(I) and Cu(II) ions leads to the gold photodeposition decreased due to the competition in adsorption and reduction. In contrast the presence of Fe(III) ion can promote the photoreduction through oxidation-reduction synergic effect.

Great appreciation is acknowledged to Chemistry Department Gadjah Mada University for the financial support granted with the Project Number: 0101/J01.1.28/L.06/2015.