Abstract: O-Toluic acid (OTA) and m-toluic acid (MTA) are two isomers of toluic acid that act as an important organic intermediates, mostly used in medicines and pesticides. The aim of the study was to evaluate the impact of biofield energy treatment on isotopic abundance ratios of 2H/1H, 13C/12C, (PM+1)/PM and 18O/16O, (PM+2)/PM, in toluic acid isomers using gas chromatography-mass spectrometry (GC-MS). The OTA and MTA samples were divided into two parts: control and treated. The control sample remained as untreated, while the treated sample was further divided into four groups as T1, T2, T3, and T4. The treated group was subjected to biofield energy treatment. The GC-MS spectra of both the isomers showed five m/z peaks due to the molecular ion peak and fragmented peaks of toluic acid derivatives. The isotopic abundance ratio of (PM+1)/PM and (PM+2)/PM were calculated for both the isomers and found significant alteration in the treated isomers. The isotopic abundance ratio of (PM+1)/PM in treated samples of OTA was decreased and then slightly increased upto 2.37% in T2, where the (PM+2)/PM in treated OTA, significantly decreased by 55.3% in T3 sample. Similarly, in case of MTA, the isotopic abundance ratio of (PM+1)/PM in the treated sample showed a slight increase the (PM+2)/PM was decreased by 11.95% in T2 as compared to their respective control. GC-MS data suggests that the biofield energy treatment on toluic acid isomers had significantly altered the isotopic abundance of 2H, 13C, and 18O in OTA and MTA as compared to the control.

The distribution of contaminant sources of any molecule on a native or global scale can be understood by determining the isotopic abundance ratio, and characterization of elementary reaction mechanisms [1]. The natural abundance or any kinetic process that leads to the local depletion or enhancement of isotopes in organic molecules can be successfully determined using gas chromatography-mass spectrometry (GC-MS) [2]. Moreover, the rate of chemical reaction may vary with the mass of the nucleus with different isotopic substitutions, which slightly affect the partitioning of energy within the molecules. These deviations from perfect chemical equivalence are termed as isotope effects. The isotopic abundance ratio is commonly reported in terms of atom percent and determined by high resolution mass spectrometry (HRMS spectrometry) [3].

Two toluic acid derivatives, o-toluic acid (OTA) and m-toluic acid (MTA) were taken for mass spectroscopy study. Both of the toluic acid derivatives are widely used as a chemical intermediate to synthesis the insect repellant in the chemical industry, as plastic stabilizer in polymer industry and as a starting material in pharmaceutical products [4,5]. MTA is used specifically as starting material in the production of 3-carboxybenzaldehyde, 3-methylbenzophenone, 3-benzoylphenylacetic acid, N,N-diethyl-3-methylbenzamide, etc. [6]. They are mostly found in crude oil and artificially synthesized from toluidines and oxidation of ortho and meta xylenes [7]. Besides, toluic acid isomers are biodegradable products and its bioaccumulation potential is very low as compared to their homologs. This chemical is stable to hydrolysis in water in abiotic conditions, however, indirect photo-oxidation may have occurred via hydroxy radicals in the atmosphere. If xylene and toluene were taken with contaminated food they are metabolized mainly to methylbenzoic and benzoic acid respectively, which eventually conjugated with glycine to produce methylhippuric and hippuric acid, then excreted in the urine [8].

The photophysical stability as well as chemical reactivity of toluic acid isomers is the primary concern and could be altered by an alternative approach: Mr. Trivedi’s biofield energy treatment. The properties could be enhanced by utilizing The Trivedi Effect®, a unique biofield energy treatment by Mr. Trivedi which is already known to alter the physical and structural properties of various living and non-living substances [9,10]. The National Center for Complementary and Alternative Medicine (NCCAM) has recommended the use of biofield therapy as a part of complementary and alternative medical therapies (CAM) in the healthcare sector [11]. CAM includes numerous energy-healing therapies, in which the biofield therapy is a form of putative energy medicine that is being widely used worldwide to improve the overall health of human beings. Humans have the ability to harness energy from the environment/universe and can be transmitted to any object (living or non-living) around the globe. This process is called biofield energy treatment. The impact of the Trivedi Effect® has been studied in various research fields like microbiology, biotechnology, and agricultural research [9,10,12,14]. Based on the outstanding results achieved by the biofield energy treatments on ceramics, microbiology, and agricultural research, an attempt was made to evaluate the effect of biofield energy treatment on the isotopic abundance ratio of (PM+1)/PM and (PM+2)/PM in OTA and MTA.

Both, o-toluic acid (OTA) and m-toluic acid (MTA) were procured from S D Fine Chemicals Pvt. Limited, India. Each of the samples was distributed into two parts, where one part of each sample was referred as control sample and the other part was considered as treated. The treated sample was further divided into four groups (i.e. T1, T2, T3, and T4) and handed over to Trivedi for biofield energy treatment under standard laboratory conditions. Trivedi provided the treatment through his energy transmission process to the treated group without touching the sample. The control and treated samples were characterized using gas chromatography-mass spectrometry (GC-MS).

GC-MS analysis was performed on Perkin Elmer(USA)/auto system XL with Turbo mass, having detection limit up to 1 picogram. The GC-MS spectra were obtained in the form of % abundance vs. mass to charge ratio (m/z). The isotopic abundance ratio 2H/1H or 13C/12C (PM+1)/PM and 18O/16O (PM+2)/PM was expressed by its deviation in treated samples as compared to the control one. The percentage change in isotopic ratio (PM+1)/PM and (PM+2)/PM were calculated with the following formula:

Where, RTreated and RControl are the ratios of intensity at (PM+1) to PM in mass spectra of treated and control samples, respectively. 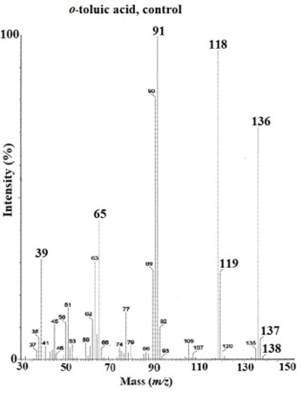 The GC-MS spectra of control and treated (T1, T2, T3, and T4) samples are presented in Figure 1 and 2, respectively. Mass spectra of OTA is well matched with the reported literature [15]. MS spectra showed five peaks including molecular ion peak (PM) for both the control and treated samples of OTA. Five major peaks at m/z 136, 118, 91, 65, and 39 were observed that corresponded to the following ions respectively: C8H8O2+, C8H6O+, C7H7+, C5H5+, and C3H3+ ions. Peak at m/z 136 was the molecular ion peak and the other peaks observed in both, control and all treated OTA samples were due to the fragmentation of OTA inside mass spectrum. The base peak at m/z 91 was observed due to breaking of o-toluic acid to stable toluene molecule that showed the highest intensity in the mass spectrum. Further, m/z 118, 65, and 39 peaks were observed due to first reduction of the molecular ion to aldehyde, which again fragmented to give cyclopentene and propyne respectively. The intensity ratio and calculated percentage isotopic abundance ratio of (PM+1)/PM and (PM+2)/PM is presented in the Table 1. Moreover, the isotopic abundance ratio (PM+1)/PM and (PM+2)/PM in control and treated OTA was plotted in Figure 3. 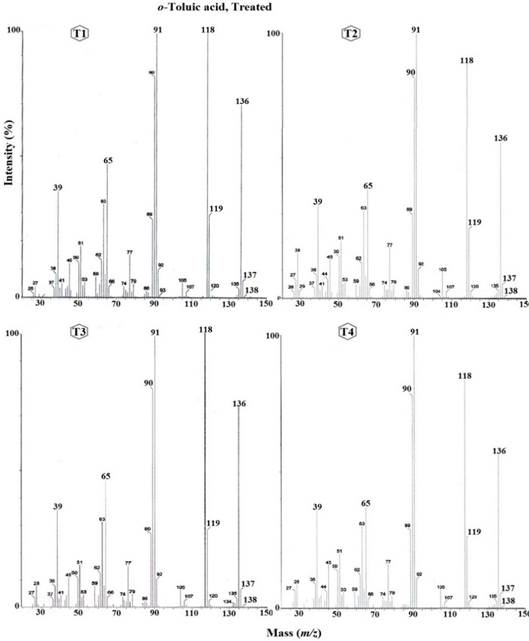 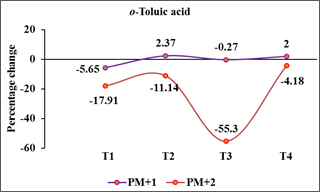 Figure 3. Percentage change in the isotopic abundance (PM+1)/PM and (PM+2)/PM of o-toluic acid under biofield energy treatment as compared to the control. 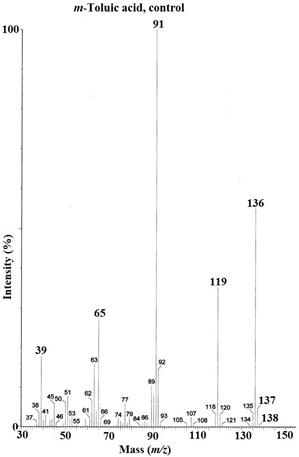 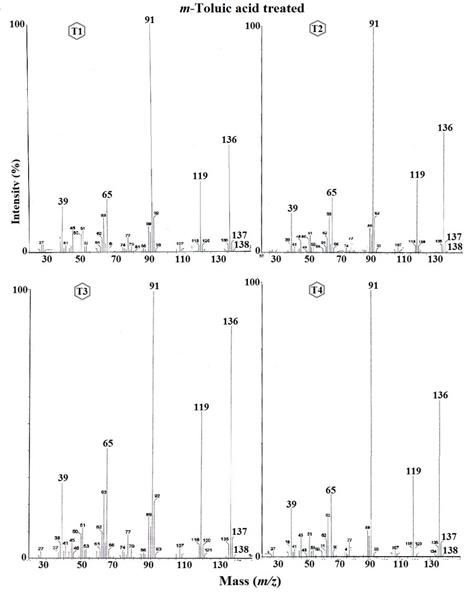 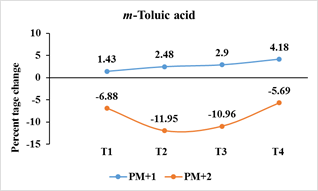 Figure 6. Percentage change in the isotopic abundance of (PM+1)/PM and (PM+2)/PM of m-toluic acid under biofield energy treatment as compared to the control.

Most interestingly, when methylbenzoic acid, toluene, and xylenes are taken internally, they are all converted to hippuric acid (derivative of benzoic acid) by reaction with the amino acid, glycine then passed through kidneys and eventually removed from the body with urine [19]. The increased reactivity of carboxylic group after biofield energy treatment may enhance this metabolic process to remove toluic acid derivatives from the body.

In summary, toluic acid isomers were studied with GC-MS under the influence of biofield energy treatment and observed a significant change in isotope abundance of 2H/1H, 13C/12C and 18O/16O as compared to the control sample. The alteration in isotopic abundance ratios have significant impact on bond energies and chemical reactivity of the molecules. The smaller enhancement in the isotopic abundance ratio of (PM+1)/PM in OTA and MTA, the reactivity may be reduced slightly at the aromatic ring by slight increase in the effective mass (m) and the binding energy of the treated sample. However, significant depletion in heavier isotopic abundance ratio, (PM+2)/PM, may increase the reactivity of the –COOH group after biofield energy treatment. From the above observations, it can be concluded that the enhancement of heavier isotopes in the aromatic ring may decrease the reactivity of the aromatic ring but decreased heavier isotopes may increase the reactivity of the functional group of toluic acid isomers, consequently enabling them to be used as an intermediate in the organic synthesis. It will also provide quicker biodegradation pathway in the environment while leaching.