Abstract: The geometrical structure and the vibrational spectra of dimer Rb2Cl2, trimer Rb3Cl3, tetramer Rb4Cl4 molecules and heptaatomic Rb4Cl3+, Rb3Cl4– ions were studied. The cluster molecules and ions had been detected in equilibrium vapour over rubidium chloride previously. The quantum chemical calculations by DFT with hybrid functional B3P86 and MP2 methods were performed. The effective core potential with Def2–TZVP (6s4p3d) basis set for rubidium atom and full electron aug–cc–pVTZ (6s5p3d2f) basis set for chlorine atom were used. The equilibrium configuration was confirmed to be rhomb of symmetry D2h for dimer Rb2Cl2, distorted cube (Td) for tetramer Rb4Cl4 and polyhedral (C3v) for heptaatomic ions Rb4Cl3+ and Rb3Cl4–. For the trimer molecule Rb3Cl3 two isomers have been revealed: hexagonal (D3h) and butterfly-shaped (C2v), the latter has lower energy and is proved to be predominant in equilibrium vapour in a broad temperature range.

Several alkali metals including rubidium may chemically combine with halogen to form different neutral and ionic clusters which exist in vapours [1-10]. These clusters are characterized by different geometrical structures, vibrational spectra, and thermodynamic properties which are mostly depend on the number of atoms composing the species [1]. The formed clusters possess specific electronic, optical, magnetic and structural properties which make them useful in different technical and scientific applications [2,3]. These properties are also strongly depending on size and composition of the clusters. Changing the magnitude and structure of a cluster aggregate allows coming up with new materials of desired properties [11].

Different molecular and ionic associates were detected in vapour over rubidium chloride; they are dimer, trimer, and tetramer molecules and the ions Rb+(RbCl)n (n = 1–4) [22].

Previously the quantum chemical methods has been used to study tri- and pentaatomic ions Rb2Cl+, RbCl2–, Rb3Cl2+, Rb2Cl3– [20]. The ionic clusters were studied by density functional theory (DFT) with the Becke–Lee–Yang–Parr functional (B3LYP5), second order and fourth order Møller–Plesset perturbation theory (MP2 and MP4) using the basis sets aug–cc–pVTZ (5s4p2d1f) for Cl and cc–pVTZ (7s5p4d1f) for Rb [20]. This study aims the investigation of the structure and properties of neutral and heavier ionic clusters of rubidium chloride.

The density functional theory (DFT) with hybrid functional the Becke–Perdew correlation B3P86 [23-26] and second order Møller–Plesset perturbation theory (MP2) implemented into PC GAMESS (General Atomic and Molecular Electronic Structure System) program [27] and Firefly version 8.1.0 [28] were used for calculation of geometrical parameters and frequencies of normal vibrations. The visualization of the geometrical structure, specification of parameters, and assignment of vibrational modes in infrared spectra was done using the Chemcraft software [29] and MacMolPlt program [30]. The effective core potentials with Def2–TZVP (6s4p3d) basis set for Rb atom [31,32] and full electron aug–cc–pVTZ basis set for Cl (6s5p3d2f) atom [32,33] were applied in this study. The basis sets were taken from the EMSL (The Environmental Molecular Sciences Laboratory, GAMESS US) Basis Set Exchange version 1.2.2 library [34,35].

The Openthermo software [36] was used in calculation of the thermodynamic properties including energies ∆rE and enthalpies ∆rH°(0) of the reactions which were calculated through the following equations:

The properties of the diatomic RbCl and dimer Rb2Cl2 molecules was computed using three different DFT hybrid functionals, B3LYP5, B3P86 and B3PW91 and Møller–Plesset perturbation theory (MP2) for the purpose of choosing the appropriate method to be implemented in this study and estimation of uncertainties in theoretical values. The results for diatomic molecule RbCl together with the available experimental data are shown in Table 1.

Notes: Here and hereafter, Re is the equilibrium internuclear distance (Å), E is the total electron energy (au), ωe is the fundamental frequency (cm–1), μe is the dipole moment (D), IEvert and IEad are the ionization energies, vertical and adiabatic, respectively (eV), EA is the electron affinity (eV).

As is seen the calculated internuclear distance (Re) using three DFT hybrid functionals were overrated by 0.07–0.09 Å when compared with the reference data and that of MP2 was overrated by 0.07 Å. Considering both DFT and MP2 methods, the results obtained show very little variation whereas DFT/B3P86 and MP2 give the best results regarding to the reference. The calculated values of frequency were underrated by 6–9 cm–1 (2.7–3.9%) for DFT methods while MP2 result coincides with the experimental value [38]. The results for dipole moment (μe), show high deviation from reference data for the case of MP2, overrated by 0.88 D; and overrated by 0.41–0.47 D for the DFT methods.

For the dimer molecule Rb2Cl2, a planar cyclic structure of D2h symmetry (Fig. 1a) was confirmed to be equilibrium, while linear one (C∞v) was found to be a saddle point on the potential energy surface. The calculated properties; internuclear distance, valence angle, vibrational spectra and enthalpy of the dissociation reaction are presented in Table 2. As seen the calculated values of internuclear distance are overrated by 0.04–0.09 Å compared with literature data [45] and the values of enthalpy of dissociation reaction are in agreement with the reference data [22,46].

The absence of low frequencies in the vibrational spectra of Rb2Cl2 indicates the rigidity of the structure; the lowest frequency being about 50 cm–1.

In the IR spectrum, three vibrational modes ω4, ω5, and ω6 have nonzero intensities but due to overlapping of ω5 and ω6 only two peaks could be seen which are asymmetrical stretching 171 cm–1 and wagging 52 cm–1 (MP2).

Based on results for the RbCl and Rb2Cl2 molecules, it is worth to mention that the data obtained by MP2 and DFT/B3P86 hybrid functional agree better with the available literature data therefore these two methods were chosen for further computations of heavier molecular and ionic clusters.

Notes: aThe MP2 calculation. Here and hereafter, αe is the valence angle (deg). ∆rE and ∆rH°(0) are the energy and enthalpy of the dissociation reaction Rb2Cl2⇌2RbCl (kJ mol-1), Ii are the infrared intensities (D2×amu–1×Å–2). The reducible vibration representation reduces to Γ = 2Ag + B1g + B1u + B2u + B3u.

For the trimer molecule Rb3Cl3, three possible geometrical configurations were considered; linear of D∞h symmetry, hexagonal of D3h symmetry and butterfly-shaped of C2v symmetry. The linear configuration was found to be unstable due to presence of imaginary frequencies but the rest two configurations, (Figs. 1b and 1c) were confirmed to be equilibrium. The results are shown in Table 3.

Notes: ∆rEiso = E(C2v)–E(D3h) is the relative energy of the butterfly-shaped isomer regarding the hexagonal one (kJ mol-1). The reducible vibration representations for Rb3F3 of D3h and C2v symmetry reduces to Γ =

and Γ = 6A1 + A2 + B1 + 4B2 respectively. For the C2v butterfly-shaped isomer, the values given in parentheses near the frequencies are infrared intensities (D2amu-1Å-2).

For the hexagonal isomer (D3h), one internuclear distance Re(Rb–Cl) and one valence angle αe(Rb–Cl–Rb) or βe(Cl–Rb–Cl) are needed to describe the structure; for the butterfly-shaped isomer (C2v), four internuclear distances Re1, Re2, Re3, Re4 and two valence angles αe(Rb2–Cl5–Rb3) and βe(Cl4–Rb1–Cl6) are used for the description. The butterfly-shaped configuration has lower energy, by 2.6 kJ mol–1 (DFT) and 10.0 kJ mol–1 (MP2), than hexagonal one.

The values of p(C2v)/p(D3h) were obtained for the temperature range between 700-2000 K; the plot is shown in Fig. 2. As is seen the butterfly-shaped isomer is more abundant than hexagonal one and the concentration of the former decreases with temperature increase. 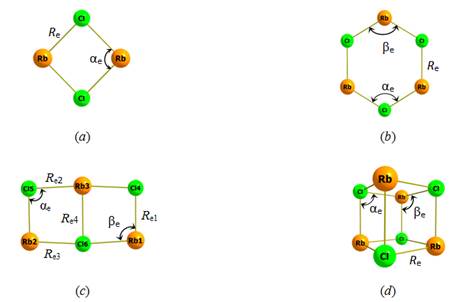 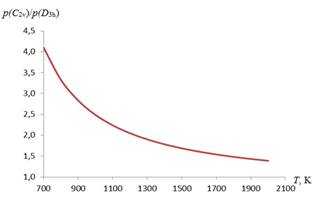 Figure 2. Temperature dependence of relative amount of the C2v isomer regarding to D3h isomer of trimer Rb3Cl3 molecule.

The IR spectra of both isomers of Rb3Cl3 molecule are shown in Fig. 3. The most intensive bands correspond to the stretching vibration modes and bending modes have lower intensities.

When comparing the properties of Rb3Cl3 with Rb3F3 molecule, a similarity may be noted: the same two isomers were revealed for Rb3F3 [21] and the butterfly-shaped isomer was predominant in that case as well. 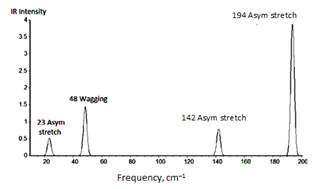 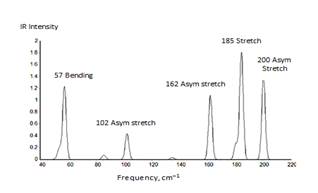 One internuclear distance Re(Rb–Cl) and one valence angle αe(Rb–Cl–Rb) or βe(Cl–Rb–Cl) are needed to describe the structure. In the IR spectrum, three vibrational modes are active but only one peak could be observed ω6 (T2) which is assigned to asymmetrical stretching Rb–Cl vibration; other two modes have low intensities.

For heptaatomic ions Rb4Cl3+ and Rb3Cl4–two alternative structures were considered, polyhedral of C3v symmetry and two-cycled with mutually perpendicular planes of D2d symmetry (Fig. 4); only polyhedral structure of symmetry C3v was confirmed to be equilibrium. The results for both positive and negative ions are presented in Table 5. The polyhedral structure is described by two internuclear distances Re1 and Re2 and three valence angles, αe(Rb2–Cl5–Rb3), βe(Rb1–Cl4–Rb3) and γe(Cl4–Rb2–Cl7). Compared to the D2d structure, the polyhedral configurations possesses lower energy with the energy drop of 87 kJ mol–1 and 83 kJ mol–1 for Rb4Cl3+ and Rb3Cl4– respectively, according to MP2 results. 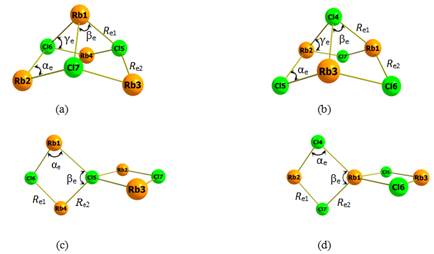 As is seen in Table 5 the respective geometrical parameters and vibrational frequencies of the positive and negative ions are close to each other. The IR spectra are shown in Fig. 5. In both spectra, the stretching vibrational modes have higher intensities than bending modes. 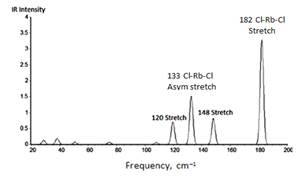 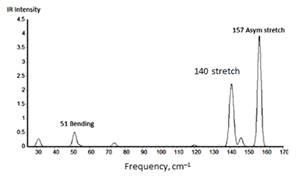 The properties of the trimer and tetramer molecules and heptaatomic ionic clusters have been investigated theoretically using DFT/B3P86 and MP2 methods. The corresponding parameters of the species calculated by two methods are generally in a good accordance to each other; while the internuclear distances Rb–Cl found with DFT/B3P86 are longer by 0.02–0.04 Å than those found with MP2 method. Among the species considered, for the Rb3Cl3 molecule two isomers, hexagonal C3v and butterfly-shaped C2v, were proved to exist; the latter was evaluated to be more abundant in vapour. When compare the Rb3Cl3 with Rb3F3 studied previously, alike features may be noted (including the existence of two isomers). The results obtained for the heptaatomic ions show similarities between the respective properties of positive and negative ions.

All authors participate well in all steps including computation, data analysis and manuscript preparation towards production of this work.

Tables A1 to A5 contain the thermodynamic functions of the ionic and molecular clusters; trimer Rb3F3, tetramer Rb4Cl4, and heptaatomic Rb4Cl3+ and Rb3Cl4–. The tables include absolute temperature T in K, molar heat capacity cp°, Gibbs reduced free energy Φ°, and entropy S° which are given in J mol–1 K–1, and enthalpy increment H°(T)–H°(0) in kJ mol–1.

Table A2. Thermodynamic functions of the Rb3Cl3, D3h isomer.

Table A3. Thermodynamic functions of the Rb4Cl4, Td isomer.

Table A4. Thermodynamic functions of the Rb4Cl3+, C3v isomer.

Table A5. Thermodynamic functions of the Rb3Cl4–, C3v isomer.