Abstract: The theoretical study on the molecular structure of a serie of p-aminophenyl benzene-fused bis tetrathiafulvalenes is presented. Optimized geometry of the title compound was calculated using DFT method at the level of B3LYP theory and 6-31G(d,p) basis set. The HOMO and LUMO analysis were used to determine the charge transfer within the molecule and some molecular properties such as ionization potential, electron affinity, electronegativity, chemical potential, hardness, softness and global electrophilicity index. Molecular electrostatic potential map was performed by the DFT method. The chemometric methods PCA and HCA were employed to find the subset of variables that could correctly classify the compounds according to their reactivity.

With the development of computer techniques and computational chemistry, the quantum chemistry presents insights into electronic structures of molecules and strongly propels the development of the traditionally experimental chemistry [6]. Currently, density functional theory (DFT) method has been accepted as a popular approach for the computation of structural characteristics and energies of molecules by the community [7] and for the efficiency and accuracy with respect to the evaluation of a number of molecular properties [8]. A suitable quantum chemical study is helpful to insightfully clarify experimental phenomena and to economically predict material properties.

In this paper, we present the synthesis, molecular structure, HOMO, LUMO and molecular electrostatic potential (MESP) map of a serie of p-aminophenyl benzene-fused bis tetrathiafulvalenes. Calculations were performed by using DFT-B3LYP method with 6-31G(d,p) basis set. The electronic properties of the title molecule were calculated from the total energies and the Koopmans’ theorem. These are related to especially Frontier molecular orbitals. The other important quantities such as ionization potential (I), electron afﬁnity (A), electrophilicity index (ω), chemical potential (µ), electronegativity (χ), chemical hardness (η), and softness (S) are also evaluated in the way of molecular orbital framework.

All computational calculations have been performed on personal computer using the Gaussian 09W program packages developed by Frisch and coworkers [9]. The Becke's three parameter hybrid functional using the LYP correlation functional (B3LYP), one of the most robust functional of the hybrid family, was herein used for all the calculations, with 6.31G(d,p) basis set [10-11]. Gaussian output files were visualized by means of GAUSSIAN VIEW 05 software [12]. Principal component analysis (PCA) [13] and Hierarchical cluster analysis (HCA) are two chemometric methods were performed using software XLSTAT. 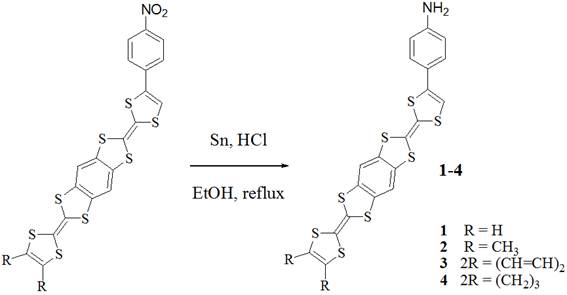 The optimized geometry of p-aminophenyl benzene-fused bis tetrathiafulvalenes which performed by B3LYP methods with atoms numbering as shown in Figure 1. The global minimum energies obtained by DFT/B3LYP method with 6-31G(d,p) basis set for compounds 1-4 are -4008.96, -4087.61, -4162.62 and -4125.71 a.u, respectively. Some selected optimized geometrical parameters of entitled compounds have been obtained by using the above method and they are presented in Tables 1 and 2. In the present work, geometry optimization parameters for p-aminophenyl benzene-fused bis tetrathiafulvalenes have been employed without symmetry constraint.

The computed 3D plot of molecular electrostatic potential (MEP) for p-aminophenyl benzene-fused bis tetrathiafulvalenes are shown in Figure 2, which is based on the electron density at different points on the molecule. The red colour in the map indicates the negatively charged portion and the blue colour indicates the positive region, while the green colour indicates the neutral region. The potential values in this molecule ranges from -4.50 e-3 a.u. (deepest red) to +4.50 e-3 a.u. (deepest blue). As can be seen from the map, the regions surrounding the sulfur atoms are strongly negative, while the H atoms in the ring and amine groups are positive; among them the H atoms in the amines are more positive than them in ring groups. 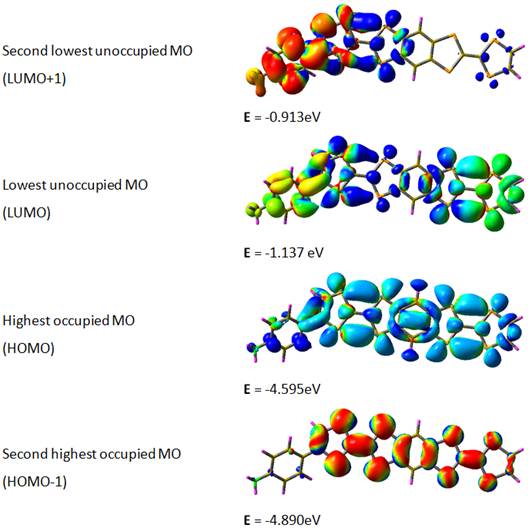 The HOMO and LUMO energy values are related to the ionization potential (IP) and electron affinities (EA) as [15]:

In the simplest terms, the hardness of a species (atom, ion, or molecule) is a qualitative indication of how polarizable it is, in another way how much its electron cloud is distorted in an electric ﬁeld. The hardness and softness were suggested in literature [16, 17] to denote resistance to deformation by mechanical force. This explains the changes in the energy linked with the transition state to ground-state using different descriptors. The softness is simply the reciprocal of the hardness. The global hardness (η) and softness (Ѕ) of a chosen molecule calculates the energy gap between the HOMO and LUMO orbitals. The mathematical expression of (η) and (Ѕ) can be written as:

Molecules with large HOMO-LUMO gap are hard which implies higher stability and opposing charge transfer, since they oppose changes in their electron density and distribution. On the contrary a molecule which requires a small energy gap for its excitation is also termed as soft molecules. Hence, they are highly polarizable in nature. In terms of chemical change, soft molecules are more reactive than hard molecules.

Electronegativity is the tendency of molecules to attract electrons [18]. Parr and Yang attempted to quantify this very descriptor [19]. This is found by the average of HOMO and LUMO energy values, as represented by CHELPG [19]. It can be expressed in terms of orbital energies:

From this point of view the electronegativity of a molecule is the drop in energy when an inﬁnitesimal amount of electronic charge is added to the system. It is a measure of resistance of an atom or ion, or a group or atoms in a molecule for an entering electronic charge.

Chemical potential denotes the afﬁnity of an electron to ﬂee and is deﬁned as the ﬁrst derivative of the total energy with respect to the number of electrons in a molecule [20]. By the expression of MO theory, μ is simply the negative of electronegativity value. It is given as:

Electrophilicity (ω), that gives an idea of the stabilization energy when the system gets saturated by electrons which come from the external environment. These reactivity information shows if a molecule is capable of donating charge. A good, more reactive, nucleophile is characterized by a lower value of (ω), while higher values indicate the presence of a good electrophile. Our results indicate that, molecule 4 has lower values of (ω), so that compound is good nucleophile. However molecule 3 is a good electrophile.Compound 1 has the smaller frontier orbital gap so, it is more polarizable and is associated with a high chemical reactivity, low kinetic stability and is also termed as soft molecule.

Fukui indices are, in short, reactivity indices; they give us information about which atoms in a molecule have a larger tendency to either loose or accept an electron, which we chemist interpret as which are more prone to undergo a nucleophilic or an electrophilic attack, respectively. The Fukui function is defined as [22]:

where δ(r) is the electronic density. N is the number of electrons and r is the external potential exerted by the nuclease. Fukui function (FF) is he one of the widely used local density functional descriptors to model chemical reactivity and selectivity. The Fukui function is a local reactivity descriptor that indicates the preferred where a chemical species will change its density when the number of electron is modified. Therefore, it indicates the propensity of the electronic density to perform at a given position upon accepting or donating electrons [23, 24]. Also, it is possible to define the corresponding condensed or atomic Fukui functions on the jth atom site as:

are nucleophilic, electrophilic and free radical on the reference molecule, respectively. In these equations, qk is the atomic charge (evaluated from Mulliken population, electrostatic derived charge, etc.) at the jth atomic site is the neutral (N), anionic (N+1) or cationic (N-1) chemical species.

Table 5. Order of the reactive sites on compounds 1 and 2.

Table 6. Order of the reactive sites on compounds 3 and 4.

The molecules under investigation mainly give reduction reactions on the nitro group. In the carbon atoms of title compounds, the tendency of the electrophilic attack, nucleophilic attack and free radical attacks is given in Table 5 and 6.

In this work, we auto scaled all calculated variables in order to compare them in the same scale. Afterwards, PCA (principal component analysis) was used to reduce the number of variables and select the most relevant ones, i.e. those responsible for the tetrathiafulvalenes derivatives reactivity. After performing many tests, a good separation is obtained between more active and less active tetrathiafulvalenes compounds using ten variables: I, A, χ, ɳ, s, µ, ω, EHOMO, ELUMO, ΔEgap (see tables 3 and 4).

We can observe from PCA results that the first three principal components (PC1, PC2 and PC3) describe 99.92% of the overall variance as follows: PC1 = 98.89%, PC2 = 1.01% and PC3 = 0.02%. The score plot of the variances is a reliable representation of the spatial distribution of the points for the data set studied after explaining almost all of the variances by the first two PCs. The most informative score plot is presented in figure 4 (PC1 versus PC2) and we can see that PC1 alone is responsible for the separation between more active (1 and 3) and less active compounds (2 and 4) where PC1>0 for the more active compounds and PC1<0 for the less active ones. The same results follow in the case of global reactivity trend based on ω. 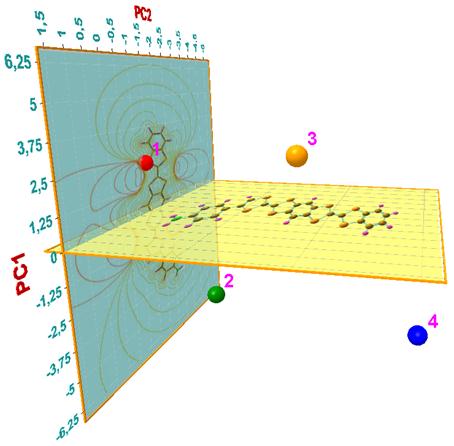 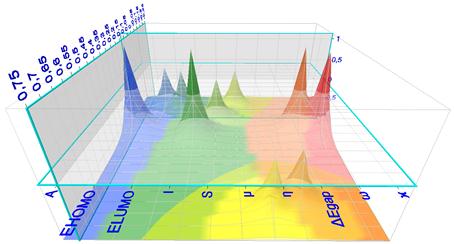 Figure 5. Loading plot for the variables responsible for the classification of the p-aminophenyl benzene-fused bis tetrathiafulvalenes studied 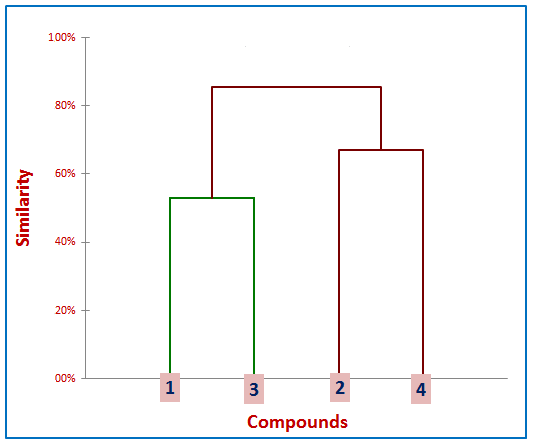 This paper reports a comprehensive computational structural study on p-aminophenyl benzene-fused bis tetrathiafulvalenes. A number of reactivity parameters have been done by employing density functional theory (DFT) with 6-31G(d,p) as the basis sets. Reactivity reﬂects the susceptibility of the title compounds towards a speciﬁc chemical reaction and plays a key role in, for example, the design of new molecules and understanding material science. The chemical reactivity of molecules shows that compound 1 is more polarizable and is associated with a high chemical reactivity, low kinetic stability and is also termed as soft molecule.The results reported in the present paper can help in the experimental investigations on the origin of the design of new molecules in the field of organic materials.