Abstract: The essentials oils (EO) in Cinnamomum culilawan bark have been isolated by steam distillation and evaluated by GC/GC-MS, IR and NMR methods. The GC/GC-MS analysis identified 12 compounds. The major components are eugenol (66.477%), safrole (12.432%) and methyleugenol (6.972%). Repeated purification of the two main compounds yielded eugenol (51.66%), and safrole (6.71%).

The lawang tree, Cinnamomum culilawan (Lauraceae), grows naturally in Moluccas Islands, and west Papua, East Indonesia [1,2]. The local name of this tree in Moluccas Islands is lawang; the trunk of tree can grow as high as 12-20 meters, on altitudes of 300 m above sea level. The culilawan oil is produced through steam distillation of the tree bark and the oil of culilawan is usually used as a pain killer for aches and pains in Moluccas Islands. Also, the lawang bark extract is used for tradisional medicine such as tooth aches, muscular pains and stomach aches in Papua [3]. While many plants from some genera have been studied and some even commercially explored for essential oils, some of those are Cinnamomum sintoc [4,5], Cinnamomum carolinense [6] and Cinnamomum bodinieri [7], the species Cinnamomum culilawan has been rarely investigated. Isolation of safrole from culilawan oil from other places in West Seram, Moluccas and Papua has been reported [8,9], but the chemical constituent of this oil not presented in those papers yet.

The barks of lawang three were collected from Allang Village, Ambon Island, Moluccas in January 2016 and were deposited in the Organic Chemistry Laboratory, Pattimura University, Ambon. The raw material was air-dried until constant weight and chopped into small pieces.

2.3. Isolation of Essential Oil from Bark of Cinnamomum culilawan, Bl

The dry plant material (2.0 kg) from bark of Cinnamomum culilawan was steam-distilled using conventional steam distiller for 6 hours to obtain the essential oil. The essential oil were then dried by anhydrous sodium sulfate (Na2SO4) and cool-stored in brown bottle for further analysis.

GC-MS analyses of bark culilawan oil were performed using Shimadzu QP-2010 Plus at 70 eV and 320°C with auto sampler, system equipped with Rtx-5 fused silica capillary column (30 m x 0.25 mm ID, film thickness 1.0 μm). Oven temperature was from 60°C for 5 minutes, then programmed heating from 60 to 220°C at a rate of 10°C for 5 minutes, and from 280°C for 4 min, injector temperature 270°C. The carrier gas was helium at flow rate of 1.40 mL/min. Spectra were scanned from 40 to 600 m/z, split ratio 20, ion source temperature 225°C. The spectrum of the unknown component was compared with that of known components stored in the Wiley 7 library. Name, molecular weight and structure of the component of the test materials were ascertained.

In a 500 mL flask, NaOH (20.0 g), aquades (150 mL) and culilawan oil (100.0 g) were chargedand the mixture were strired until forming two layers. The upper layer (A) was separated from the bottom layer (B). The upper layer was extracted with 25 mL NaOH 20% and aquous layer was combined to bottom layer (B). The organic layer (A) was washed with water until neutral and dried with Na2SO4 anhydrous and the residue was distilled under reduced pressure at 15 mmHg/120°C. The bottom layer (B) was acidified with HCl 20% until pH reached 3 and extracted twice with 100 mL petroleum eter. The organic layer was washed until neutral and dried over anhydrous Na2SO4. After removing the petroleum ether, the residue was distilled under reduced pressure at 15 mmHg/140°C. The purity of compounds was tested by GC and the elucidation of the structures employed FTIR, 1H-NMR, 13C-NMR and GC-MS methods.

The bark essential oils of C. culilawan was distilled from dry plant material on equipment of the steam distillation. Culilawan oil obtained from steam-distillation revealed that oil from the bark have a yield of 4.12% w/w.

a) Concentration of compounds base on GC-FIDpeaks (see Figure 1) and the isolated of compounds were highlighted in bold face.

Due to very limited amount of published data on Cinnamomun culilawan, Bl essential oil, it is difficult to compare results of this study with essential oil composition of plant grown in other countries. 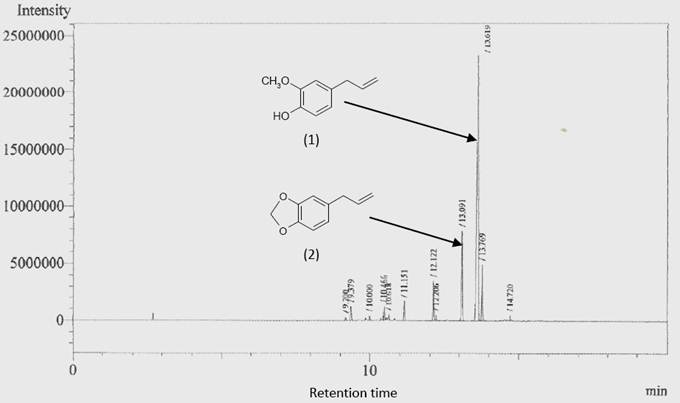 Figure 1. GC-FID peaks for% oil and the structure for isolated compounds (1 and 2) from the bark essential oil of Cinnamomun culilawan.

The Infra red spectrum of safrole (2) showed absorption band in the region 2977cm-1 which is the absorption Csp3-H. This was confirmed by the appearance of absorption at 1432 cm-1 for –CH2- (methylene). Untake range of C=C aliphatic absorption appeared at 1639 cm-1, absorption at 1608 cm-1 for C=C aromatic and supported by absorption at 2977-2842 cm-1 which is absorption band for =Csp2-H (aliphatic/aromatic). Absorption band at 1246 cm-1 and 1034 cm-1 region showed the range of C-O-C (ether). The 1H-NMR spectrum, signal doublet at 3.33 ppm (-CH2-, J = 6.4Hz) and signal multiplet at 6.00 ppm (–CH=, J = 6.4Hz), signal singlet at 5.95 ppm of one methylenedioxy group. The 13C-NMR spectrum showed 10 nonequivalent carbon resonances and the MS spectrum showed a molecular ion peak [M+.] at m/z 162, C10H10O2 (see table 1). The high concentration of eugenol in bark essential oil of Cinnamomun culilawan makes it potentially useful for the preparation of herbal and modern medicines because they exhibit antibacterial, antifungal, anti- inflammatory, insecticidal and antioxidant activities [11-15].

The chemical composition of essential oil from Cinnamomun culilawan, Bl, was obtained from steam distillation method, and its chemical composition was determined by GC and GC-MS. The result indicated that the essential oil is mainly phenylpropanoid compound (86.473%), the minor compounds are oxygenated monoterpenes (7.934%) and monoterpenes hydrocarbon (5.592%). The purification of the two main compounds yielded eugenol (51.66%), and safrole (6.71%).

This study is part of the Fundamental Research Grant in 2015 from the Director General of Reasearch and Community Service, Ministry of Research, Technology and Higher Education, Indonesia.