Abstract: Immersion tests were used to study the inhibition effects of a complex vapor phase inhibitor on rusty iron coins. Electrochemical behaviors of simulated cast iron specimens in corrosion solution with or without inhibitor have been investigated by Potentiodynamic polarization and electrochemical impedance spectroscopy (EIS) methods. The rust composition structure of the cast iron coins after corrosion inhibition treatment was analyzed by X-ray diffraction (XRD) and X-ray photoelectron spectroscopy (XPS). Scanning Electron Microscope (SEM) has been used to detect the morphology change before and after inhibition treatment. The results show that the vapor phase inhibitor has a good synergistic inhibition effect. The corrosion potentials of cast iron electrode were positive shift and passivation phenomenon has been tested. A steady deposit film containing Fe2O3 and α-FeOOH were formed on the surface of the specimen. A chemisorption was formed between the inhibitor and iron coin surface rust, and the rust changed compact. It increases the corrosion resistance of the rust layer.

Iron relic is an important type of cultural relics. Because chemical property of iron is very active, unearthed iron relics are always corroded seriously and needed protection treatment urgently. Inhibitor treatment is an effective method for iron relics conservation. With the aim of iron relic conservation with rust, many researchers have been studied the inhibitors for rusty iron relics [1-3].

Vapor phase corrosion inhibitor (VPI) can vaporize and condense on metallic surface to prevent corrosion [4]. VPI reaches the metallic surfaces without contacting the surface directly and almost without changing the relic color. It has many advantages for using in iron relic conservation [5, 6]. In this paper, a CH VPI was investigated to protect rusty iron relics. The inhibition effectiveness was studied by suspension test and electrochemical measurements [7]. The interactions of CH VPI with the coin surface rust were characterized by X ray diffraction (XRD) analysis and X-ray photoelectron spectroscopy (XPS) analysis. The morphology transformations were detected by scanning electron microscope (SEM). The mechanistic information on corrosion and inhibition processes was discussed.

The specimen material was simulated cultural relic iron. The composition was determined as weight%: C 3.00%, Si 1.84%, S0.089%, P 0.098%, Mn 0.82%, Febalance. They were square with 10mm×10mm×10mm by line cutting. The surfaces of these specimens were polished with emery paper up to 800 grade. The quadrate specimens were shielded by epoxies left exposed area about 1 cm2 for studies.

Vapor phase inhibitor composed of cyclohexylcarbamate and hexamethylenetetramine, it’s abbreviation was CH VPI. The rust iron coin is Kuanyong Tongbao. Before the test, irons were washed by ultrasonic wave and degreased with acetone. The test solution was 3%NaCl solution, the blank without inhibitor, the other with add CH VPI.

Rust iron coin specimens were suspended in jars with or without CH VPI for suspension test. The coin was not touching with jars wall. After 7 days suspension test, the coins were taken out to observe the change of rust layer.

Electrochemical measurements was conducted by Corrtest System (CS350, Huazhong University of Science and Technology). The apparatus was a three-electrode system with quadrate specimens as the working electrode with exposed area of 10mm×10mm. A saturated calomel electrode (SCE) was used as the reference electrode; a platinum foil was used as the auxiliary electrode.

The specimens were first cathodically polarized at –1.0V for 1 minutes to remove the oxide film on the surface. Polarization scaning was in the range of -0.2V to +0.5V relative to the corrosion potential until the anodic current density reached 0.5mA·cm-2. Scanning rate was set at 20mV·min-1. Electrochemical impedances were measured at corrosion potential, in a frequency domain range from 100 kHz to 0.01 Hz. The sinusoidal potential perturbation was 10 mV in amplitude.

Suspension test is an intuitive method to evaluate inhibition effect [8]. It can observe the color change of the specimens. In the condition with no CH VPI, the solution color was changed reddish brown. March rust deposits could be observed on jars bottoms, and new rust was emerged on coin surface. While the coin suspended in the gars with CH VPI, the color of corrosion solution and the coin almost unchanged. And no new rust was observed on coin surface. The results show that CH VPI has good effect on inhibition. 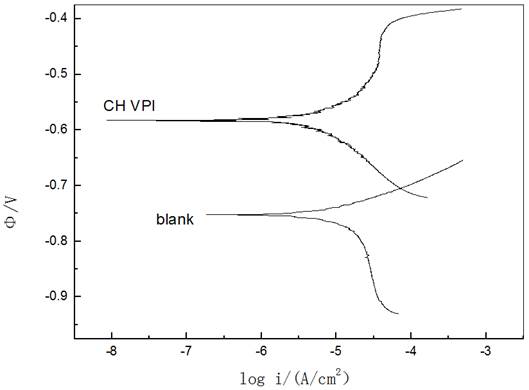 Fig. 1. Polarization curves in solution with or without CH VPI.

Fig. 2 shows the impedance Nyquist plots of cast iron electrode in corrosion solution with and without CH VPI. The equivalent circuit model employed for this system is shown in Fig. 3. 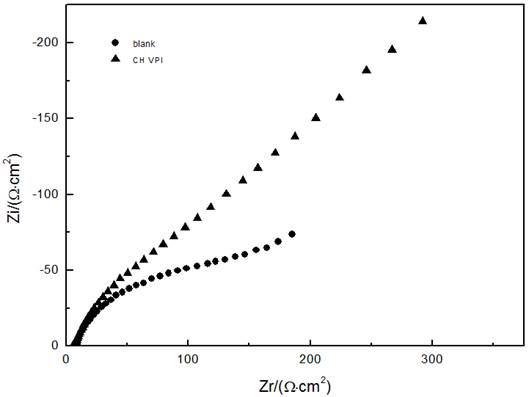 Fig. 2. Electrochemical impedance spectroscopy in solution with or without CH VPI.

Table. 1. Electrochemical parameters of EIS in solution with or without CH VPI

The fitting electrochemical parameters of EIS in different solution is show in table 1. Form the table 1, it was found that the electrolyte resistance Rs almost unchanged after the CH VPI add in solution. While the electric charge shift resistance Rt decreased obviously. And a Warburg resistance appeared in low frequency, its value is huge which led to increasing of total resistance. It also reveal that CH VPI has good inhibition effect. The results of electrochemical impedance measurements and polarization curves tests is consistent.

In order to study the inhibition mechanism of CH VPI to cost iron material, XRD has been used to analyze the rust change in different corrosion solution. 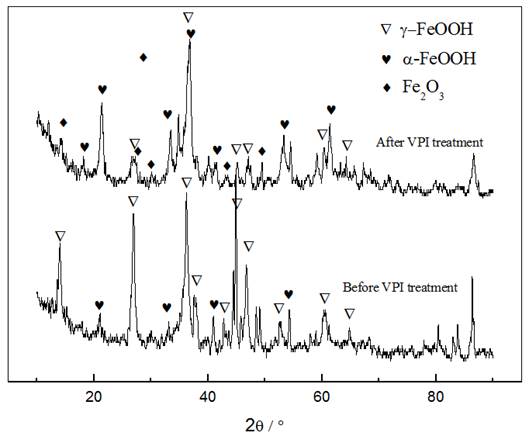 Fig. 4. XRD of surface rust of cast iron before and after inhibition treatment.

Fig. 4 is the XRD results of surface rust of cast iron before and after inhibition treatment. It shows that CH VPI treatment induced great change of rust construction. Without the CH VPI treatment, the rust was consist of γ-FeOOH, ɑ-FeOOH, and γ-FeOOH has large quantity. While treated by CH VPI, the peak of γ-FeOOH declined. But the ɑ-FeOOH peak increased, and the peak represented Fe2O3 emerged. It reveals that inhibition treatment can transform the rust construction. More ɑ-FeOOH and Fe2O3 were generated, but the content of γ-FeOOH decreased. The rust of γ-FeOOH is unstable and loose, which has no protection to cast iron. The rust of ɑ-FeOOH and Fe2O3 are stable and compact, which have protection to cast iron matrix. So the inhibition mechanism can improve the stability of rust construction.

SEM has been used to detect the morphology change before and after suspension corrosion test. The results were show in Fig. 5. 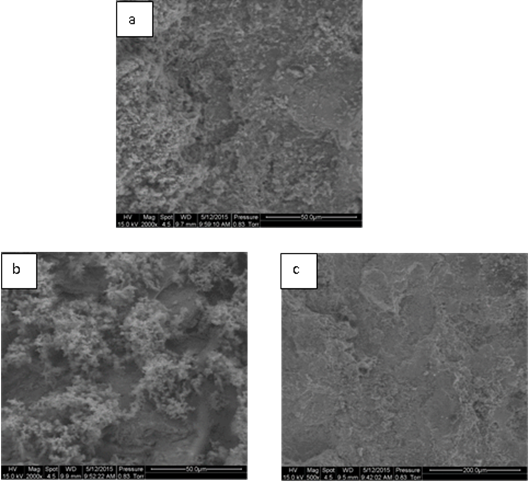 (a) Before suspension corrosion test

(b) After the suspension corrosion test without inhibitor

(c) After the suspension corrosion test with CH VPI

In spite of the fact that many kinds of VPI were used for metal protection. But the mechanism of these compounds is not completely clear. XPS analyses were performed to study the change of rust composition structure of the cast iron coins after corrosion inhibition treatment 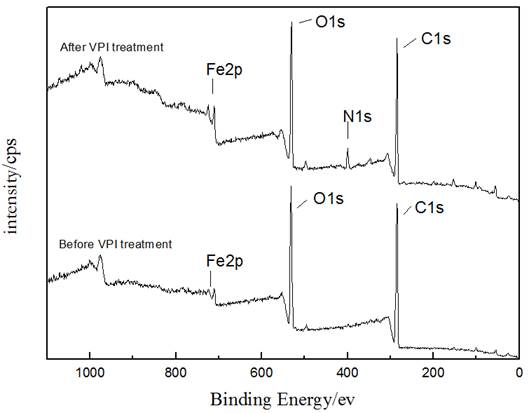 Fig. 6. XPS spectra of the rust on coin surface.

Fig. 7 shows XPS spectra of Fe element. By comparing of the spectra before and after inhibition treatment, it can be found that the binding energy Fe2p3/2 peak shift from 709.4ev to 711.0ev. The rising of Fe2p3/2 peak binding energy reveals that Fe element provided electrons to CH VPI molecular. Chemical adsorption was formed between the CH VPI and iron coin surface. 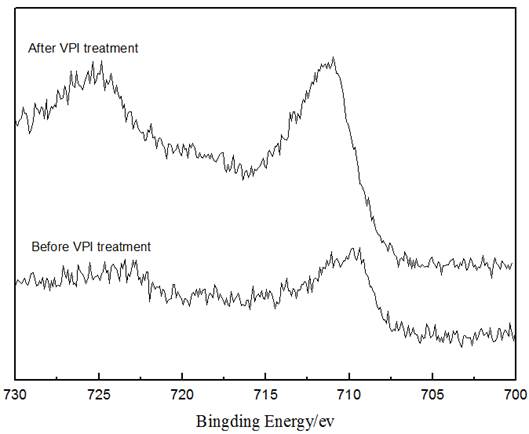 XPS spectra of O element are shown in Fig.8. The binding energy of O1s peak dropped after CH VPI treatment. And an obvious lattice oxygen peak appears. It may be the C=O bond in CH VPI accepted the electrons from Fe element, so the lattice oxygen peak strengthens. It also indicates that chemical adsorption was formed between the CH VPI and iron coin surface [9,10]. 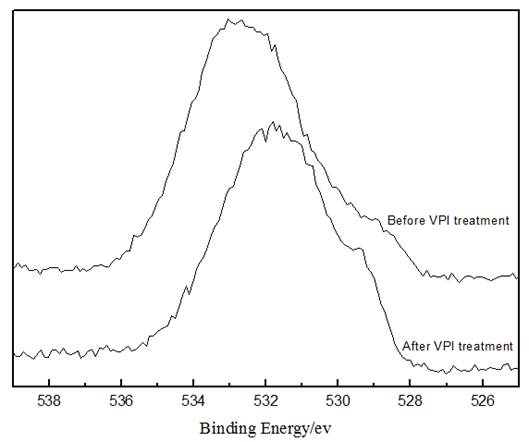 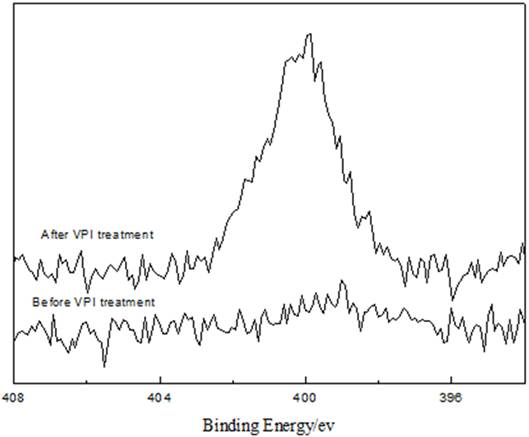 The rust layer covered on the coin surface is seldom homogeneous and has many defects. The rust composition structure analysis results demonstrate that a chemical adsorption was formed between the inhibitor and iron coin surface rust. The iron coins treated by CH VPI are formed a covering layer with good protection effect. CH VPI is able to suppress the corrosion reaction at the defect sites. Thereby, the effect of the rusty layer stabilization can be caused by an adsorption of CH VPI on active sites. This special protective layer is stable and compact, which can have positive performance on rusty iron coins protection.

A vapor phase inhibitor composed of cyclohexylcarbamate and hexamethylenetetramine (CH VPI) has good inhibition effect on rusty iron coin. Electrochemical measurements reveal that the CH VPI can increase the electrolyte resistance and lead to corrosion decrease. This mix-type compound CH VPI mainly inhibited reaction of anode. It can induce the rust structure transform to more stable and compact, which has good inhibition performance for rusty coin. The CH VPI was chemical adsorbed on the surface of cast iron, and led to a well-functioned coating for protection.