Preparation and Characterization of Polyaniline Nanotubes

Abstract: The present work reports slightly modification of the conventional chemical synthesis of polyaniline (PANI) to be nanotube structure without the need for any template or structural directing materials. PANI preparation was optimized by the oxidation of two different precursors: aniline and aniline hydrochloride with ammonium persulfate (APS) as oxidizing agent in various aqueous media of strong, weak acid and in alkaline medium at different pH values. Structural and morphological properties of the products are characterized by SEM, XRD and FTIR. Results showed the strong dependence of PANI nanotube on the acidity at certain pH value during the oxidation of aniline by APS. It is founded that, the optimum condition for preparation of PANI nanotube was obtained under oxidation of aniline monomer by APS in aqueous media of weak acid medium at pH five degree.

The advancement of science and technology provides the smaller and smaller dimensions with higher precision and enhanced performance. Currently, nanotechnology is concerned with fabrication and various applications of functional materials and structures in the range of 1nm to 100 nm using chemical and physical methods, nanoscale size control of material leads to superior physical and chemical properties with molecular and supermolecular structures [1–4].

Conducting polymers exhibit a wide range of novel electrochemical, chemical, electrical, magnetic, and optical properties that has led to their use in a diverse array of applications including sensors, biosensors, light-emitting diodes, electronics devices, microwave absorption and rechargeable batteries [5,6].

Among the conducting polymers, Polyaniline (PANI) has found significant attention in recent years which is used more extensively because of its easy preparation from aniline monomer with good thermal stability and it exhibits good electrical, optical, magnetic, and chemical properties [7-10]. These features together with the low cost and wide availability of aniline and its derivatives make it an ideal candidate in many practical applications such as gas sensing, pH sensing, light-emitting diodes or corrosion protection. Switchable membrane, anti-corrosive coatings and thus poly aniline is used in this investigation [11-13].

Nano structures of PANI are of great current interest because they combine the properties of low- dimensional organic conductors with high surface area materials, this situation can lead to enhanced in unique chemical, electrical, magnetic, and optical properties [14,15].

Various synthetic pathways are reported for the synthesis of PANI, but it is still highly desirable to develop novel and smart synthetic procedures for building PANI nanostructures, such as nano fibers/ wires/ rods/tubes [16].

In the present work, preparation and characterization of PANI nanotube has been studied.

The products were collected on filter paper, washed with reagent grade water and three 100 ml portions of 0.2M HCl, and similarly with methyl Alcohol and Acetone until the filtrate become colorless. Finally, the product was dried in air and then in vacuum at 60˚C for 24h.

The SEM micrograph of polyaniline samples indicated in figure 1-a, 1-b it is observed that PC5 shows PANI super morphology nanotube, whereas rod PANI found in PCW and elongated PANI nanoparticles observed in PC2-PC4. Granular morphology is obtained in (PS2-PS5, PA10, PA12, PHC, PHS and PHW) due to no polymer chain entanglement during the polymerization process [9]. Thus, the role of the initial acidity and the acidity profile during the oxidation of aniline were soon recognized to be a key factor in the formation of PANI supermorphology nanostructures, the formation of PANI nanotubes in the oxidative polymerization of aniline with ammonium peroxy disulfate generally involves conditions of low initial acidity PC5 (reaction media with acetic acid at pH 5 degree). This agree with Miroslava and Jaroslav, report the role of initial weakly acidic as a directing factor in PANI nanotube dominate; under strongly acidic or alkaline condition, granules are produce.[16]

Thus, the significant key to fabricate PANI nanotube is to control the initial acidity during the oxidation of aniline monomer.

The average grain size of the polyaniline nanoparticles samples has been calculated by Scherrer's Formula:

where K is the particle shape factor (generally taken as 0.9), λ is the wave length of Cu kα radiation (λ=0.15406 nm), θ is the diffraction angle of the most intense peak, β are the experimental full width at half maxima (FWHM) of the investigated sample. The average grain sizes of each polyaniline nanoparticles samples obtained by this formula are tabulated in table1. 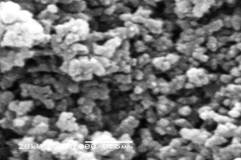 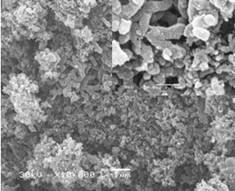 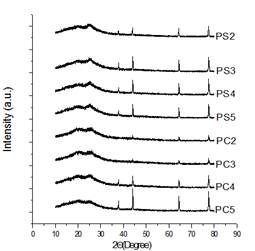 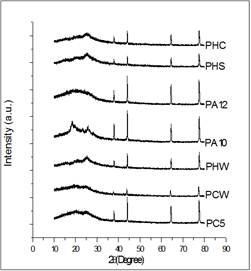 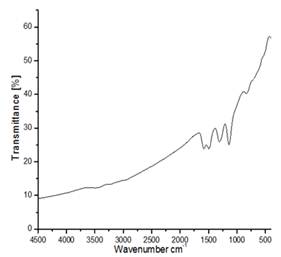 FTIR spectrum of polyaniline nanotube sample (PC5) that are given in figure 2.a, 2-b show the bread band at low intensity peak 3265-3320 cm-1 is attributable to the N-H stretching vibration due to the protonation of nitrogen, this confirms that sample nearly does not contain any free NH or OH group. The band at 1572 and 1489 cm-1 are attributed to C=N and C=C stretching mode of vibration for the quinonoid and benzenoid units of poly aniline. The C-N stretching mode of the benzenoid unit can be assigned to the band at 1310 cm-1. The band at 1125 cm-1 is obtained from the quinoid unit bof polyaniline C-C and C-H stretching of the benzenoid unit of poly aniline shows a band at 810 cm-1. Hence peak assignment reveals that the produce polymer is polyaniline [18, 19].