Measurement of the Liquid Level in the Fuel Tank of Rocket

Abstract: In this paper we consider the problem of mathematical modeling of fluid flow in the vertical channel of fuel management system. The system has a vertical measuring channel with sensors inside the channel for fixing the free surface level of fluid in the channel. By lowering the level of fuel in the tank fuel level decreases in the channel. When the level of fuel in the channel reaches the sensor, the sensor activation occurs. Thus, the level of fuel in the channel determining fuel level in the tank. Fluid flow in the vertical measuring channel describes by non-stationary equation of motion of parabolic type. For dynamic modeling used a viscous incompressible fluid. The fluid flow is called non-stationary parabolic equation of motion for the cylindrical channel. We got an approximate solution of the problem by averaging the terms of the equation of motion for the channel radius. The solution of the differential equation is satisfied in the package Mathcad applications. Graphs of displacement and velocity of the free surface of fuel in the measuring channel are represented over time. Measurement error of liquid level in the fuel tank has been determined. It is proposed engineering solution to eliminate error of the fuel level measurement. 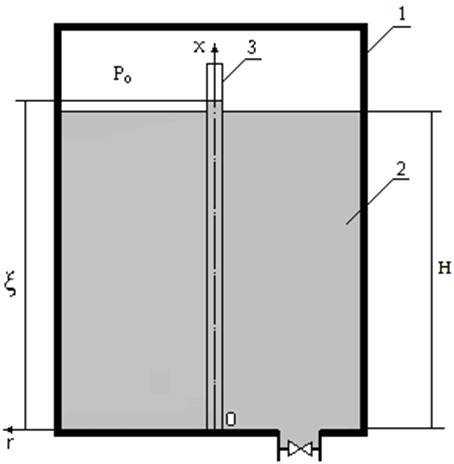 - liquid level in the channel,

- liquid level in the tank,

We consider the problem of mathematical modeling of fluid flow in the vertical channel of fuel level management system of rocket. Fluid flow in the vertical measuring channel describes by non-stationary equation of motion of parabolic type. Unsteady motion equation was solved by many researchers. Problems discussed in [1-3] can be called a classic. The article [1] considers the laminar fluid flow in a cylindrical channel from standstill. The pulsating motion is presented in [2]. The results of calculation of a periodic motion are compared to the experimental data. The equations of motion are solved by operational calculus.

In [5] it is shown that in practical usage of rocket engines, the ratio of oxidizer and combustible is broken. What leads to a greater or lesser throttle opening. The paper [6] presents a non-linear mathematical model to simulate the pulsating flow. The governing equations are numerically solved by a composite scheme incorporating the two-step Lax-Wendroff method with the trapezoidal integration version of the method of characteristics at the pipe boundaries. The validity of the mathematical model and the methodology was verified by comparing the analytical predictions with experimental results.

Work [7] presents unsteady flow of a non-Newtonian fluid due to instantaneous valve closure. the appropriate governing equations are solved by a numerical approach. A fourth-order Runge-Kutta scheme is used for the time integration, and the central difference scheme is employed for the spatial derivatives discretization. To verify the proposed mathematical model and numerical solution, a comparison with corresponding experimental results from the literature are made.

In work [8] presents the method of characteristics (MOC) for simulation of unsteady flow in a pipeline. However, the relatively complex method of implicit (MOI) provides the advantages of unconditional convergence and mutual independence between time and space mesh parameters. This study combines the MOC and MOI to simulate pipeline unsteady flow and hydropower transient processes.

The paper [9] presents results of an investigation of the response of an incompressible fluid in a circular micro pipe to a sudden time-independent pressure drop. Solutions of the problem were obtained analytically using the Laplace transform technique and numerically using the lattice Boltzmann method.

The paper [10] presents steady and unsteady flows in a mildly curved pipe for a wide range of Reynolds numbers are examined with direct numerical simulation. In article [11] fully developed pulsed flow of an incompressible Newtonian fluid (crude oil) through a pipe line has been modeled and analyzed using the finite element method and compared with results based on an analytical solution. The flow is generated by a periodic pressure gradient superimposed on a constant Poiseuille flow. The results show good agreement between analytical and numerical solutions based on finite element method for the Newtonian fluid under unsteady regimes.

In article [12] the dynamic interaction between the pipe and unsteady flows is analyzed based on experiments and numerical models. The paper [13] presents a method of characteristics for solving one-dimensional model of fluid flow in pipe networks.

The goal of this research is to develop a mathematical model of the liquid flow in the vertical measuring channel of the fuel level measurement system of rocket.

2. The Mathematical Formulation of the Problem

At the initial time,

, the fuel level in the tank and in the channel is the same (

). The free upper end of the cylindrical channel is located above the fuel level in the tank, so the flow of fuel from the tank into the channel at this location possible. The lower base of the cylindrical channel coincides with the bottom of the tank, and the fuel is communicated freely between the tank and the channel. Above the free surface of fuel (

) in the tank and the channel maintains a constant pressure

The fuel level in the tank varies by the law

boundary conditions of the problem

the initial condition of the problem

- velocity of the liquid in the channel,

The average speed of fuel in the cylindrical channel

radius of the cylindrical channel.

. Write down the balance of pressure and friction

We obtain the following expression

Then, we use the equation of Darcy-Weisbach

uniting the equation of Darcy-Weisbach and equation (4)

We substitute (5) into equation (3) and obtain the following expression

We calculate the pressure gradient of the following conditions: pressure decreases linearly from the boost pressure

over the free surface of the fuel to the pressure

. The pressure gradient is

coordinate of free fuel surface in the measuring channel.

we are adding initial conditions and obtain the Cauchy problem

Performed numerical solution of the problem:

. The solution of the boundary value problem is given numerically in package Mathcad applications. Results of the solution are shown in the graphs (Figure 2 - Figure 4) 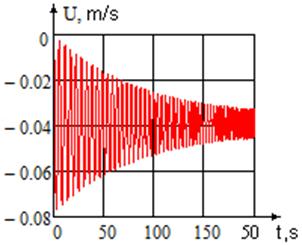 Figure 2. Changing the average fluid velocity in the channel. 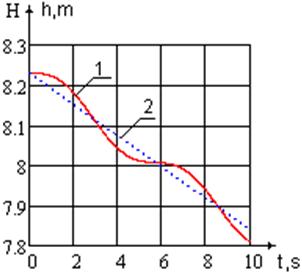 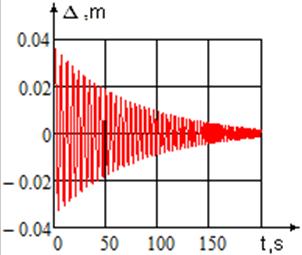 Figure 4. Error in the measurement the liquid level in the range

Fluctuations have a variable period. Mathematical experiment shows that the period of oscillation decreases with time: in the time interval

; in the time interval

. On the flow characteristics significantly affected by acceleration, so for

the oscillation amplitude is reduced to

, and the period is reduced to

. In comparison with the acceleration channel resistance effect was insignificant, so for

and the period of oscillations is reduced to

The graph (Figure 4) shows the error in measuring the liquid level versus time. We can see that the magnitude of the error is a periodic function, in which the amplitude and period of oscillations decreases with time. The maximum error in determining the level of fuel in the tank is observed in the beginning of the flight of a rocket and reaches the value

. Error in measuring the liquid level is not regular, making it difficult to adjustment errors in software.

Note that the sensor may operate as in the positive and as in the negative deviation from the actual position of the fuel level in the tank. In this case, the error is doubled. Given the size of the diameter of the rocket, we are talking about hundreds of fuel kilograms.

The results suggest that the level sensors may provide false information, depending on the site of attachment. The error is not systematic. Experimental research is time-consuming and expensive. Therefore, the mathematical experiment is the most efficient method of solving the problem. The task is to signal from the sensor corresponded to the actual level of the liquid. For this purpose, the sensors must be installed at the points of intersection of the functions

It should be noted that the mathematical model of fluid flow in the vertical channel of management systems do not take into account fluctuations of liquid in the fuel tank rocket and some rocket design features. Such a study will be done in the next article.