Abstract: Swaziland is generally an arid country, with most rains falling during the period of October to March. The long term average annual rainfall ranges from 400 mm in the lowveld to 1,200 mm in the mountainous highveld. Raingauges have been used as reliable source of rainfall data, but the density of these ground based instruments is too low, offering poor spatial coverage. The use of satellite products to estimate rainfall can fill the gap created by poor spatial coverage of ground based instruments. The African Monitoring of the Environment for Sustainable Development (AMESD) project that was launched in 2007 aims to provide African Nations with resources for climate monitoring application through  the use of Meteosat Second Generation (MSG) satellite data. In Swaziland, the satellite receiving station was installed in 2012. The satellite rainfall product has not been evaluated in the country. The objective of this paper was to evaluate the rainfall product by comparing it with rainfall data sourced from raingauge. Daily rainfall data were obtained for five weather stations (Big Bend, Malkerns, Matsapha, Mhlume and Nhlangano) for 1998 to 2006. These daily rainfall data were organized in 10-day (dekadal) totals. Dekadal satellite rainfall data were obtained from the local AMESD receiving station for the respective period. The data were exported to Statistical Package for Social Sciences (SPSS) computer software for analysis. Person correlation and linear regression tests were performed for average dekadals and yearly data for the five weather stations to compared gauged rainfall and satellite rainfall estimates. The correlation for average dekadal rainfall data was significant at 99% level of confidence for all weather stations. Correlation coefficients and R2 were higher for weather stations in the middleveld (Malkerns and Matsapha). The magnitude of underestimation of rainfall by satellite products was higher during the wet season for weather stations receiving relatively higher rainfall. The correlation between yearly gauged rainfall and yearly rainfall estimates from satellite product was significant at 99% level of confidence for Big Bend, Mhlume and Matsapha. It was significant at 95% level of confidence for Malkerns, and not significant for Nhlangano weather station. The regression models that were developed could be used to adjust rainfall estimates from satellite products to ground (gauged) rainfall for an area or community.

Swaziland is a landlocked country located on the southern part of the African continent along the geographic coordinates 31°30’E and  26°30’S and has an area of 17,363

Swaziland does not have adequate ground-based weather stations to provide reliable gauged rainfall data. There are twelve weather stations that provide reliable data in the form of daily rainfall, and, daily minimum and maximum temperature. The spatial coverage of ground-based stations falls way below the World Meteorological Organisation (WMO) standards of one raingauge per 100 km2 (WMO, 2010; Ochieng and Kimaro, undated). Each raingauge covers an average of 1,447 km². The weather stations are not evenly distributed and they are found in urban areas and plantations (agriculture and forest plantations). This problem is common not only in Swaziland but also in most developing countries in Africa because of poor topography, for socio-economic and political reasons, and also due to lack of funding for hydro-meteorological gauging stations (Hughes et al., 2006).

Rainfall monitoring is crucial for the country for agricultural and humanitarian purposes. Satellite based precipitation provide greater spatial coverage with higher temporal frequency than raingauge networks (Nicholson et al., 2003; Abiola et al., 2013). Satellite estimates are essentially averages over the area of a pixel, whereas raingauges provide measurements made at that point, applicable to a radius of a few kilometres (Grimes et al., 1999). The advantage of using satellites for monitoring the weather, rainfall in particular, include the fact that forecasts can be made well in advance, and the information can then be relayed to end-user within a short time delay (Hughes, 2006). A number of algorithms have been developed to estimate rainfall from satellite products. These include the TAMORA algorithm (Chadwick et al., 2010), the Regional Atmospheric Modeling System (RAMS) model (Orlandi et al., 2004) the Tropical Applications of Meteorological Satellite (TAMSAT) model (Teo and Grimes, 2007), and the Pitman model (Hughes at al., 2006).

Satellite based precipitation estimates provide greater spatial coverage with higher temporal frequency than many of the current rain gauge networks (Abiola et al., 2013). Several systems have been developed to provide this kind of information, such as the National Oceanic and Atmospheric Administration (NOAA), the Global Precipitation Climatology Center (GPCC) and the National Aeronautics and Space Administration (NASA), which operate at a global scale (Nicholson et al., 2003). Satellite estimates are better during the wetter months (between July and September) in North Africa (Nicholson et al., 2003). High monthly precipitation can however result to a high number of false detection (Yilmaz et al., 2005). With gauges, errors may arise from sitting and gauge type, but these are small when compared with the bias in satellite estimates (Xie and Arkin, 1995).

Swaziland obtains weather data from weather stations situated in the country`s major towns and strategic points (Figure 1). Daily national newspapers provide forecasts for the subsequent day or two. Radio and television news broadcasts also provide weather forecasts, at least on 3-hourly basis (Manyatsi et al., 2010). Weather information finds utmost use in various disciplines such as for use by farmers in agriculture, for safety and emergency measures and for the general public as it influences day-to-day activities.

The African Monitoring of the Environment for Sustainable Development (AMESD) project was launched in 2007 to provide all African nations with resources through extending the operational use of Meteosat Second Generation (MSG) satellite data for environmental and climate monitoring application (European Space Agency, 2015). The programme is managed by the African Union Commission in Addis Ababa. Satellite data and products are supplied through the EUMETcast dissemination system (EUMESTSAT, 2015). 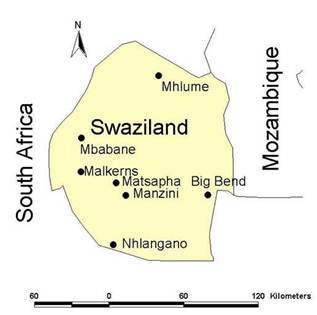 In Swaziland the satellite receiving station was installed in 2012, and it is based at the Luyengo campus of the University of Swaziland. Among other information provided by the system are historical rainfall amounts for different areas within the country. Such information could be useful in closing the gap created by sparse raingauge coverage. Meteorological satellites tend to perform poorly over Africa and there is a need to calibrate them so that they fit local use (Teo and Grimes, 2007). This paper aimed to evaluate the rainfall data sourced from satellites by comparing it with data sourced from raingauge.

Daily rainfall data for the years 1998 to 2006 were obtained from Swaziland Meteorological Services in the form of an Excel spreadsheet. These were organized into 10-day (dekadal) totals. Dekadal satellite rainfall data for the selected weather stations were obtained from the local AMESD receiving system for the respective period (1998 to 2006).  The data were exported to the Statistical Package for Social Sciences (SPSS, 2008) software package for analysis. Pearson correlation and linear regression tests were performed for average dekadals and yearly data for the five weather stations to compare gauged rainfall and satellite rainfall estimates. Regression models that could be used to estimate actual (gauged) rainfall from the satellite estimates were developed.

Table 1. Details of the five weather stations used in the study.

The correlation for average dekadal rainfall data was significant at 99% level of confidence for all stations (Table 2). The correlation coefficient for combination of all the five stations was the highest at 0.901 with R2 of 0.813. For individual stations, the correlation coefficients and R2were higher for weather stations in the middleveld (Malkerns and Matsapha) and lower for weather stations located in the lowveld (Big Bend and Mhlume). The lowveld is semi-arid and receives the lowest rainfall in the country (Table 1). The relationship between satellite estimates and gauged rainfall is more pronounced in areas with high rainfall as opposed to areas with low rainfall (Nicholson et al., 2003; Asadullah et al., 2010). There was a variation in biasness of satellite products as compared to gauged rainfall over the dekadals. However on overall the satellite product reported lower rainfall than the gauged rainfall (Figure 2).  The magnitude of underestimation by the satellite product was higher during the wet seasons for weather stations that received higher rainfall (Malkerns and Matsapha).This could be a result of satellite failing to pick orographic enhancement of rainfall (Ebert et al., 2007). Overall satellite products overestimate low and underestimate high dekadal rainfall values (Tote et al., 2015). 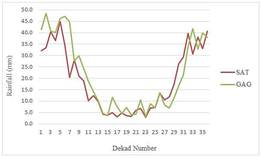 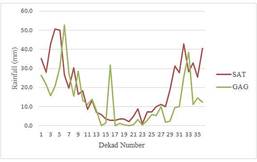 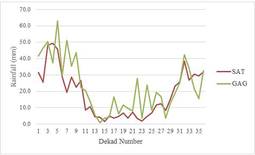 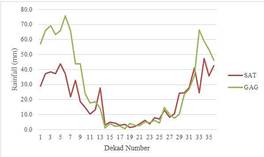 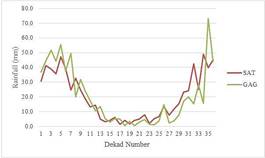 The year 2000 was the wettest for all the three weather stations. The country experienced floods that resulted in destruction of infrastructure, property and loss of lives (Manyatsi et al., 2010; IFRC, 2000).The year 2000 was followed by a period of rainfall that was below the long term average for all the stations. Drought was experienced in the country during 2001 to 2005. The magnitude of underestimating or overestimating of rainfall by the satellite product varied with the years and weather stations. For Big Bend the satellite product overestimated the rainfall during the periods when rainfall was above the long term average of 480 mm/annum, and it underestimated the rainfall during the period when rainfall was below the long term annual average (Figure 3). The annual rainfall was underestimated for all the weather stations in the middleveld (Malkerns and Matsapha), due to failure to pick orographic enhancement of rainfall (Ebert et al., 2007). 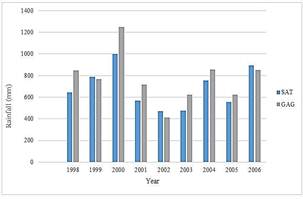 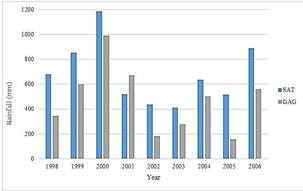 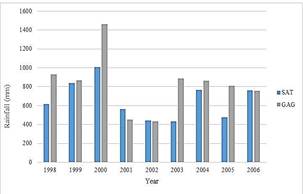 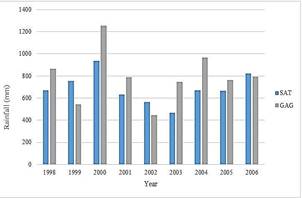 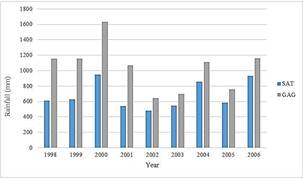 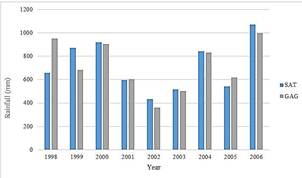 Swaziland does not have adequate ground-based weather stations that provide reliable gauged rainfall data. The ground-based stations provide an average coverage of 1,447 km2 per station. The weather stations are not evenly distributed and are found mostly in urban places. There are no weather stations in the rural community, where traditional farming is practiced, and where weather information is needed most. The AMESD project that is managed by the African Union Commission provide satellite data for environmental and climate monitoring in the continent. The satellite weather products need to be validated before they can be used in each of the country. The validation exercise that was carried for rainfall satellite products for Swaziland showed that the correlation was significant for all weather stations for dekadal (10 days) data. This was an indication that the satellite rainfall products could be used to estimate gauged rainfall. On the other hand the correlation for yearly data was not significant for Big Bend data, and yet it was significant for all the other weather stations. The regression coefficient and R2 were low for Big Bend weather station for both dekadal data and yearly data. Using rainfall estimates from satellite products for estimating ground rainfall for Big Bend would be less reliable, compared to the other weather stations. Regression models were developed to covert rainfall estimates from satellite products for dekadal and yearly rainfall. The regression models could be used to adjust rainfall estimates from satellite product for a community, in order to effectively estimate the gauged rainfall for that community.

The authors are grateful to the Food, Agriculture and Natural Resources Policy Analysis Network (FANRPAN) for funding the finalization and publication of the research findings through the Strengthening Evidence-Based Climate Change Adaptation Policies (SECCAP) project. The authors are also grateful to the University of Swaziland for availing time and facilities to conduct the study.