Increasingly, it is being recognized that termites are an important component of agro-ecosystems, particularly in developing countries where they are an alternative to high priced inputs. Mound-building termites are recognized as "ecosystem engineers" because they promote soil transformation by disturbance processes [1]. They collect particles from different soil depths and deposit them in mounds, so that contents of organic carbon, clay and nutrients, pH and microbial population are higher in termite mounds than in the adjacent soils unmodified by termites [2]. The accumulated material is later redistributed by erosion causing changes in soil micro-structure and fertility [2,3,4]. Given the major problems in the Sahel of soil crusting and nutrient depletion, termites can play a vital role if proper management techniques are practiced. Termites contribute to the rehabilitation of crusted soils, by opening up voids on the sealed surface leading to improved infiltration capacity, and consequently improved water availability.

Although termites are the most important soil fauna in the semi-arid tropics [5], they are often regarded as pest because they attack roots, and above ground plants, and stored food supplies [6]. As a result, termite research in agro ecosystems, has historically concentrated on the pest management aspects. However, of more than 2500 species [7], relatively few are agricultural pests. Furthermore, pest activity is only a part of the termites’ potential role in agro ecosystems [8].

In Borana lowland, both mound building and moundless termites are abundant and widely distributed Barnett et al. [8]. Termite mounds are conspicuous features of Borana landscape. Their materials can be differentiated from the adjacent soils by their different physic-chemical properties that impact some soil processes. Usually high concentration of organic matter and mineral nutrients are found in termite mound than in the surrounding soils. Consequently, subsistence farmers in Africa commonly spread termite mound materials in their fields to improve soil conditions and increase plant nutrient availability [10,11]. They also promote nutrient availability, nutrient cycling and soil physical properties [8].

However, according to Gauchan et al. [12], research on termite in Ethiopia has been concentrated on only the pest management aspects. Thus, generally in Ethiopia and particularly in the study area; the impact of mound-building termites on soil ecology in general and soil physic-chemical properties in particular were not yet studied. The aim of the study was to examine the soil texture and macronutrient distribution in termite mounds in relation to adjacent soil in Miyo and Yabello districts of Borana.

The study was conducted in Yabello (Did Yabello) and Miyo (Boku Luboma) districts of Borana zone. The rain fall is bi-modal. There are four seasons in the year namely; the Gana-long rainy season (March-May), the Bona-dry season (December-February), Hagaya-short rainy season (September-November) and the Adolesa-cool dry season (June-August) [13]. The study area comprises important cultural landscapes that have been utilized for centuries. The study area is also confronted with the problem of bush expansion in the native savannah grass lands.

In order to evaluate some soil physic-chemical properties of termite mounds in relation to the surrounding soils, a total of six adjacent (control) soils, three in each location were sampled for this study. The control soil was sampled at soil depth of 0-25 cm and 0-23 cm for Did Yabello and Boku Luboma sites respectively in a relatively unaffected area at reasonable distance from mounds. Control soils were considered to be the reference soils without significant termite activity. Termite mound and its corresponding control soils were located on comparative slope gradients in order to remove further differences that can be introduced due to topographic effects. Thus, any difference in soil physic-chemical properties between termite mound materials and adjacent soil was attributed to the effects of mound-building termites.

Soil pH (H2O) was measured using pH-meter in a 1:2.5 soil water ratio [14]. Determination of organic carbon content was carried out following the Walkley and Black wet digestion procedure [15] and the percent soil organic matter (SOM) was calculated by multiplying the percent organic carbon by a factor of 1.724 [16] and total nitrogen was determined by the Kjeldhal method [17]. Available phosphorus analysis was undertaken according to the method described by Olsen et al. [18]. Exchangeable bases (Ca, Mg and K) were analyzed after extraction using 1M ammonium acetate method at pH 7.0. Exchangeable Ca and Mg in the extracts were read using atomic absorption spectrophotometer whereas Exchangeable K was read by flame photometer. After displacement of the exchangeable base forming cations using 1M ammonium acetate, the samples were washed using ethanol and the ammonium on the saturated exchange sites were subsequently replaced by the addition of Na from NaCl solution. Cation exchange capacity (CEC) was thereafter estimated titrimetrically by distillation of ammonium that was displaced by sodium [19].

The textural class of the control soil was sandy loam for Did Yabello site and loam for Boku Luboma (Miyo) site. Particle size distribution in termite mound, internal and external, in relation to the control soil was affected by termites. Clay particles were significantly higher in the internal mound at both study sites (34.6% ± 3.8% clay particles at Yabello -Did Yabello and 49.2% ± 1.4% at Miyo-Boku Luboma). At Miyo site the silt content was significantly lower for internal mound where as silt content of Yabello site did not show difference at p=0.05. The sand content of internal termite mound was significantly lower for both sites (p<0.05 at both study sites) (Table 1).

As evidenced from this study soil termite mound was relatively enriched with clay in relation to the surrounding soil (control soil). This difference could be attributed to the preferential selection by termites during establishment of mound [21]. Manuwa observed similar trend in the clay content of termite mound in relation to the surrounding soil [22]. In contradiction to this trend Ackerman et al. [23] found slightly lower clay and higher silt and sand in his study which implies that in the presence of high clay materials (76% clay) termites collect and transport more silt and sand proportions to their mound in relation to the control soil. The increase in clay content by termite activity can be crucial in improving soil physic-chemical properties in soil in general and sandy-sandy loam soil in particular. This study shows that clay materials play a key role in the construction of termite mound.

The pH of external mound and internal mound were not significantly different in relation to the surrounding soil for both districts (Table 2) (p>0.05). The result is in agreement with study conducted by Brossard et al. [24] i.e. termite activity did not affect the soil pH.

The Av. P content of internal and external termite mound were non-significant (p>0.05) for Did Yabello and Boku Luboma sites (Table 2). These results are consistent with the study conducted by Ackerman et al. [23]. Although the feeding habit of termite and materials used for construction of mound can have significant impact on phosphorus sorption affecting availability of phosphorus for plant uptake [28], this trend was not observed in this study. 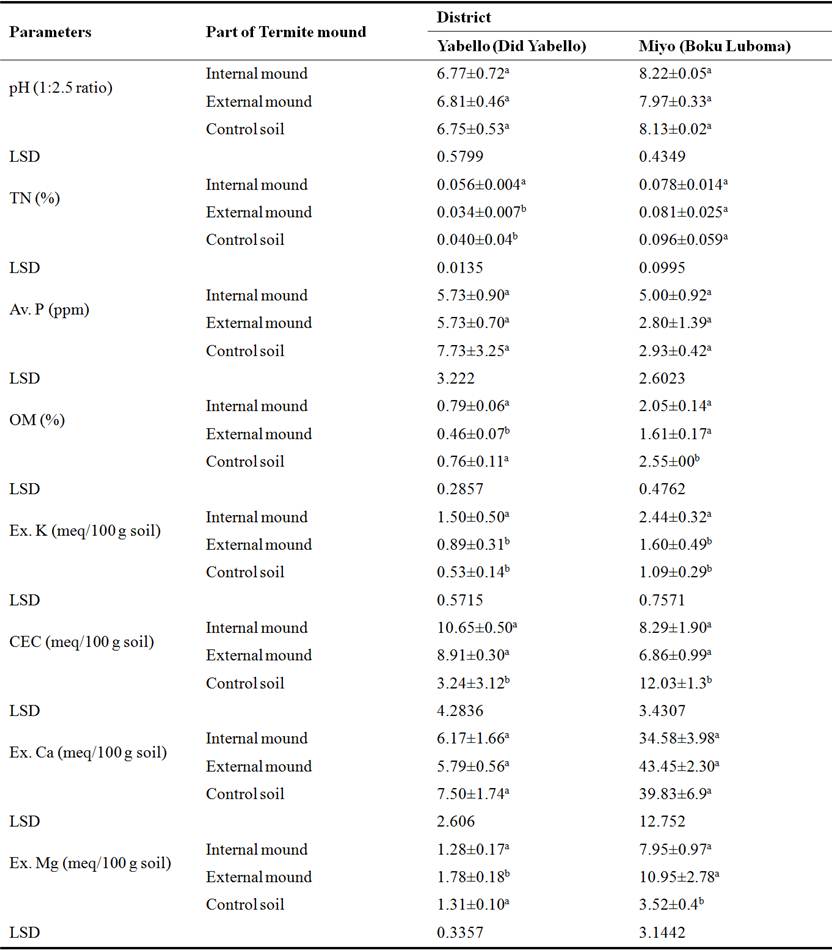 The Exchangeable calcium (Ex. Ca) content of termite mounds were non significant in relation to the adjacent soil. Research conducted by Jouquet et al. [29] revealed non-significant level of Ex. Ca in termite mound in relation to adjacent soil which is consistent with this study. Brossard et al. [24] obtained higher Ex. Ca in their study which was assumed to be caused by transportation of mineral soil from deep sub soils. The Ex. Ca is rated as medium for Did Yabello and very high for Boku Luboma site according to Jones [30] ratings. Exchangeable magnesium (Ex. Mg) content of Did Yabello external termite mound was significantly higher than internal termite mound and control soil. Ex. Mg content of control soil was significantly lower at Miyo site (p<0.05, Table 2) when compared with internal and external mound which is in agreement with study conducted by Jouquet et al. [29]. The differences in trends of the exchangeable cations could be attributed to soil types.

Control soil at Yabello had significantly lower CEC content than internal and external termite mound but higher at Boku Luboma - Miyo site. The difference in CEC between control soil and termite mound could be due to change in clay type as termites work on soil which is explained by different researchers [27,31]. Termites either decrease or increase clay’s chemically active surface area which affect the soil’s CEC content. Higher CEC for control soil is also obtained by Jouquet et al. [32]. Termite mounds with high CEC value can be used to improve low CEC soils which further support plant growth-act as nutrient storage media.

The study was conducted to examine the soil texture and macronutrient distribution in termite mounds in relation to adjacent soil. Termites produced a soil that had different soil texture and some nutrient content than the surrounding soil in the study area. Termite mounds (internal and external mound) were enriched with clay soil in both study sites in relation to the surrounding soil. The clay content in sandy and sandy loam soil can be improved by incorporating the termite mound materials in to soil which intern improve soil physic-chemical properties. Termite mound materials in both study sites were enriched with Ex. K and Ex. Mg. The other soil properties studied did not show similar trend in both sites (Miyo-Boku Luboma and Yabello-Did Yabello). Termite mound (internal mound) of Did Yabello site was enriched with TN but that of Boku Luboma was non-significant in relation to adjacent soil. The SOM content of external termite mound at Did Yabello decreased in relation to internal mound and control. Cation exchange capacity of soil was improved by termite activity at Did Yabello site but decreased at Boku Luboma site.

Termite species have effect on soil physic-chemical properties; therefore, species of termites in Borana need to be identified. This helps to design proper termite management techniques without ecological damages so that one can make use of ecological services provided by termites. There is no trend of use of termite mound as soil amendment in Borana. In future, amount of termite mound materials that should be incorporated to soil to increase crop yield and socio economic factors that influence the use of termite materials as soil amendment should be studied.

The authors would like to acknowledge Oromia Agricultural Research Institute (IQQO) for the financial support of the research. We thank Holeta Agriculture Research Center for soil analyses.