Abstract: The ever-increasing demand for biomass energy in developing countries like Ethiopia seeks urgent attention. Tree growth depends on genetic potential of the species and environmental conditions. A study was conducted at Hawi Gudina district during 2010-2013 to evaluate early survival of different agroforestry trees/shrubs (Meliaazedarach, Moringaoleifera, Leucaena leucocephala, Grevilia robusta and Sesbania sesban) for their adaptability planted under three different moisture conservation structures. These different trees and shrubs species were planted in randomized complete block design with unequal replications. Unbalanced analysis of variance revealed that the interaction of tree/shrubs survival with planting methods was found insignificant (P>0.05) at 1, 2 and 3 years of age after transplanting. The main effect of moisture conservation structures is also not significant. But highly significant variations among species in survival rate (P<0.01) was recorded at all three years of ages. Among the species tested, Moringaoliefera and Melia azedarach showed superior performance with survival rate of 100% followed by Sesbania sesban with survival rate of 88.9%. Though there was no significant difference in survival rate of trees/shrubs with respect to different planting methods. The mean survival of seedlings planted in half-moon (80%) is higher than in normal pit (73.33%) and trench (60%) three years after establishment. Similarly, species planted in half-moon recorded relatively higher in diameter and height size followed by trench micro catchment. Moringa oliefera, Melia azedarach and Sesbania sesban with half-moon planting method, offers much promise for future use in agroforestry practices in the area and similar agro ecologies.

In Ethiopia, rapid deforestation caused by an escalating demand for fuel wood and expansion of land for agriculture has brought an ever increasing pressure on native woodland species (Mebrate Mihretu et al., 2004). Some reports indicate that the remaining forest and woodland cover in Ethiopia is estimated to be diminishing annually at rate of 160,000 to 200,000 ha (Anonymous, 1994). If no remedial action is taken, this will cause severe impact on agricultural productivity leading to energy poverty and environmental degradation. Indigenous tree and shrub species play a considerable role in addressing such multi-faceted demands in mixed crop-livestock production systems (Betre Alemu et al., 2000). They have the ability to fit into farming systems to use as a source of manure, soil conservation, fuel wood, farm implements and others like shade and shelter (Kahsay Berhe et al., 2001). Before introducing any species to a given agro ecology, there is always a need for a well conducted field trial for matching of the species to a particular site (Zobel and Jabret, 1984; AbebeYadessa et al., 2000; Mebrate Mihretu et al., 2004). The most reliable information is based on trial planting in the proposed plantation area (Saville et al., 1996). The first trial should be species screening trial that will test the survival and early growth performance of the species in one to three years (Eldridge et al., 1994). The objective of conducting this field trial is, therefore, to select the best performing multi-purpose agroforestry trees/shrubs species with suitable planting methods in moisture stress areas of Hawi Gudina district.

2.1. Description of the Study Site

Hawi Gudina district is located at a distance of 519 km and 180 km from Addis Ababa and Chiro (Zonal capital), respectively. The district bordered with Daro Labu district in the North, Boke district in the East, Bale zone in the South and Arsi zone in the west. The total area of the district is estimated to be 3,041.19 km2. The district is situated between 7˚52`15`` and 9˚25`43``N and 40˚34`13`` and 41˚9’14" E. The topography of the district is mainly flat lowland with altitudes ranging from 976 to 2077 m.a.s.l. Agro-ecologically; it is divided in to Kola (83.8%), WeinaDega (12.9%) and Dega (3.3%). Annual rainfall of the district is in between 500-900mm year~1 where as minimum and maximum temperatures reach 14°C to 35°C, respectively with average of 25°C. The pattern of rainfall is bimodal and its distribution is mostly uneven. Generally, there are two rainy seasons: the short rainy season ‘Belg’ lasts from mid-February to April whereas the long rainy season ‘kiremt’ is from June to September. The rainfall is erratic; onset is unpredictable, its distribution and amount is also quite irregular. 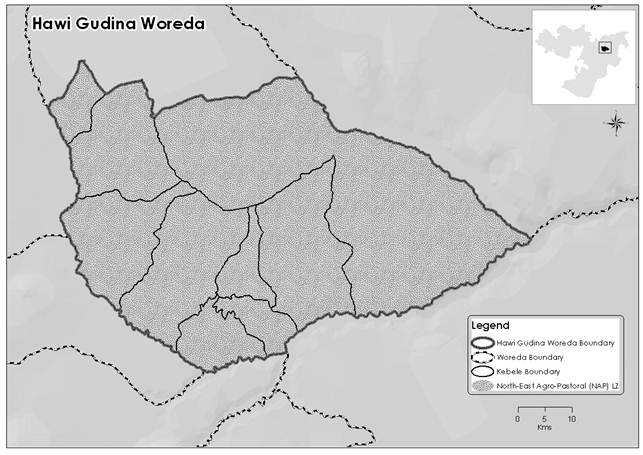 Seeds of the species were obtained from local mother trees/shrubs. Seedlings were raised in polythene tubes of size 10cm diameter and 15cm length at Mechara nursery site in a medium of 2 parts forest soil, 1 part local soil and 1 parts sand soil. The out planting site was cleared of bushes and the moisture conservation structures (planting methods) were prepared before planting the seedlings. Planting holes of size (40cm width by 40cm depth) were dug and seedlings were out-planted manually in July, 2010. The plantation site was fenced and through management was carried out until all necessary data was taken.

The experiment was laid out in factorial randomized complete block design with three replications. Each plot contained three plants with 3 m spacing between plants. Space between replications was 1 m and space between plots and blocks was 1.5 m. Structures used: Half-moon (semicircular micro basin) was prepared with diameter of 1.5 m, space across the slope=0.5 m, ridge around periphery=30 cm high and 60 cm wide, down the slope in staggered manner=2 m apart. Trench was prepared with depth of 50 cm, width=50 cm, space across the slope=0.5 m, along the slope in staggered manner=2 m apart and normal pitwas prepared with diameter=40 cm, depth=40 cm.

Data for survival count, above ground tree height and diameter at breast height (DBH) were collected. Survival rate was calculated as the proportion of surviving trees to total number of trees of the same species planted at the begining,whearas height and DBH were analysed as the mean of surviving trees of the same species. Plot means for three variables were calculated to two decimal places and subjected to unbalanced analysis of variance(ANOVA) using Genstat stastical tool since the treatments are not equally replicated in each blocks. Treatment comparisons of means were made at 5% level of siginificance using Least Siginificunt Difference(LSD) test (Steel and Torrie,1980),independantly and dependantly. Independant analyses were excuted for trees/shrubsand then combined analysis was done to observe if there is significant variation between species in relation to planting techniques.

The analysis of variance revealed that interaction of tree/shrubs survival with planting methods was found to be insignificant (P>0.05) at 1, 2 and 3 years of age after transplanting. The main effect of moisture conservation structures was not significant (Table 2). But highly significant variations among species in survival rate (P<0.01) was recorded at all three years of age. Moringa oliefera, Melia azedarach and Sesbania sesban showed good performance among tested trees/shrubs species while; Leucaena leucocephala performs least among those tested species. The survival trend for three species showed declining trend except Moringa oliefera and Melia azedarach which maintained their survival rate for all the assessment period (Table 1).

Means in columns with the same letters are not significantly different

Although there was no significant difference in survival (%) of trees/shrubs with respect to different planting methods during the assessment periods, the mean survival of seedlings planted in half-moon (80%) is higher than in normal pit (73.33%) and trench (60%) after three years of establishment (Table 2).

Means with the same letters are not significantly different

The effects of DBH and height of trees/shrubs planted in different planting methods is presented in Tables 3 and 4. Among the species tested, Luecenea lucenophela demonstrated the highest height growth (3.25 m) while Grevilia robusta showed the least (2.22 m) at age of three years (Table 4). Variations were also recorded among the species in DBH in which Moringa oleifera demonstrated the highest diameter (2.84 cm) while Grevilia robusta showed the least (1.33 cm) three years after establishment (Table 3). The variation in growth parameters are attributed to the type/nature of species. With respect to planting methods, species planted in half-moon relatively higher DBH and plant height followed by trench micro catchment.

The species tested showed highly significant survival differences among each other. The choice of adaptive species may, therefore, be decisive for success or failure of future planting. Natural selection tended to produce populations that are well adapted to the conditions in which they evolved. Whether or not a tree/shrub species has a natural distribution within which environmental conditions vary, it will probably show genetic variation. It had been reported that 80% survival rate in plantation development (Evans, 1996) is acceptable. The survival that recorded in this experiment for M. oliefera, M. azedarach, S. sesban and G. robusta by far exceeds this assumption, although the remaining species are far below the acceptable survival threshold. M. oliefera had a comparable survival rate to M. azedarach and S. sesban. In addition, half-moon micro catchment is found promising and suitable planting method for these species since it relatively increased survival and other growth parameters compared to trench and normal pit.

Three years after establishment, the result revealed that survival rate of trees for the interaction was not significant, strongly indicating it was not influenced by the combined treatments(tree species and structures). With their good survival rate and outstanding height and diameter growth; Moringa oliefera, Melia azedarach and Sesbania sesban planted in half-moon are the most promising among the species tested at Hawi Gudina district. Therefore, Moringa oliefera, Melia azedarach and Sesbania sesban has shown potential to be used as fuel wood, soil conservation, farm implements and others like shade and shelter and medicinal plantation species in Hawi Gudina and in other areas with similar agro ecology.

The authors thank to Yassin Esmael for his participation in the layout and establishment of the trail and Oromia Agricultural Research Institute for financial support.