Dendrobium moniliforme (L.) Sw, is a medical orchid which is widely used in traditional Chinese medicine and folk remedies for ophthalmic, antipyretic, and tonic purpose [1]. In China, Dendrobium plants have been used as ingredients for nutraceutical beverages and food products for thousands of years [2]. As for Dendrobium species phytochemicals, much research has been carried out on the low molecular compounds, such as bibenzyl [3], phenanthrene [4], and alkaloids [5]. A previous study has proven that the high-molecular-weight compounds such as polysaccharides were major active constituents in Dendrobium species [6]. Recently, studies of Polysaccharides from Dendrobium moniliforme have attracted more attention. Bioactivities including anti-oxidation property [7,8], hypoglycemic effect [9], immunomodulatory activity [10] and antitumor activity against human myeloid leukemia cell line HL-60 [2] have been reported. Dendrobium plants are rich in polysaccharides, and the monosaccharide components analysis of polysaccharides is of fundamental importance for the research on polysaccharide structure, characteristics and its functional properties.

Analyses of polysaccharide from some Dendrobium species are extensive, such as Dendrobium huoshanense [24], Dendrobium chrysotoxum Lindl [25] and Dendrobium denneanum [26]. However, the methods of PMP derivatization high performance liquid chromatography/electrospray ionization mass spectrometry on D. moniliforme have not been reported. In the present study, a precolumn PMP derivatization LC-ESI-MS method for analysis of five monosaccharides was established. The hydrolysis procedure of TFA was evaluated in different time intervals. Furthermore, the high performance gel permeation chromatography was successfully applied in molecular weight distribution analysis of polysaccharides purified from D. moniliforme. The information gained in this paper will be valuable for accurate qualitativing and quantitativing components of polysaccharides in D. moniliforme.

The polysaccharide was isolated from Dendrobium moniliforme by distilled water extraction and ethanol precipitation. The dried D. moniliforme (0.3g) were extracted with 200 mL distilled water by heat reflux extraction for 2 h at 100◦C. The mixed extracts were concentrated under a reduced pressure and then centrifuged at 5000rpm for 15 min. The proteins in the product of condensation were deproteinized using the Sevag reagent [27]. The supernant was collected, precipated by anhydrous alcohol and centrifuged to give polysaccharide precipitation. The parecipitation were washed twice with 80% ethanol. Residue was dried and the D. moniliforme polysaccharide was obatained. Total polysaccharide content was determined by the phenol-sulfuric acid method, using glucose as the standard reference, and wavelength scanning was presented.

2.4. Hydrolysis of the Polysaccharide

The polysaccharide (1 mg/mL) was dissolved in 500 μL TFA in an ampoule (5mL). The ampoule was sealed under a nitrogen atmosphere and kept in an oil bath at 110°C for 1.5 h, 2.5 h, 4 h and 5 h periods, respectively. After being cooled to room temperature, the reaction mixture was then centrifugated at 8000rpm for 10 min. The supernatant was collected and dried under a reduced pressure.

The procedure employed for the derivatization of monosaccharides was carried out according to the method of Daotian, F et al. [28] and modified by us. The six monosaccharides standards or the hydrolysed polysaccharide were dissolved in 0.3 M aqueous NaOH (800 μL) and a 0.3 M methanol solution (800 μL) of PMP was added to each and mixed. Each mixture was allowed to react for100 min at 70°C, then cooled to room temperature and was neutralized with 0.3 M HCl (1000 μL). The resulting solution was dissolved in chloroform (4 mL each). After shaking vigorously and centrifuging, the chloroform layer was discarded, and the extraction process was repeated four times. The supernatant was filtered through a 0.45 μm membrane and diluted with water for LC/MS analysis.

The polysaccharides, named DMP, were obtained from the stem of D. moniliforme by the method of section 2.2. An ultraviolet spectrophotometric method was developed for the quantitative determination of the total polysaccharide content due to strong UV absorption of DMP at 486 nm. The total yield rate of polysaccharides was 42%~48.6% (RSD=7.3%) based on the calibration curve obtained with standard glucose.

To investigate the components of DMP, the hydrolysis of polysaccharide were performed. H2SO4 is the mostly used hydrolysis agent in the studies of polysaccharide, however, which is difficult to remove and poses negative effect on MS analysis [29]. DMP was hydrolyzed using trifluoroacetic acid (TFA) in this study because TFA can be removed by evaporating the solution in vacuo before samples running in ESI-MS, so the contamination caused by TFA was avoided. We can see that DMP were composed of mannose, ribose, glucose, galactose, and arabinose with TFA hydrolysis. The effect of the hydrolysis time on concentration of monosaccharides was investigated and the result was shown in Fig. 1. It can be concluded that hydrolysis with TFA at different times seems to have two interesting phenomena. Firstly, with prolonging the hydrolysis time, the concentrations of the mannose and glucose decreased to a minimum and then increased. This result indicated that DMP hydrolysis is a complicated procedure. At the beginning of hydrolysis, Part of the polysaccharide was rapidly hydrolyzed to mannose and glucose. And after that, the concentrations of mannose and glucose decreased due to chemical reaction of monosaccharides under acid condition. Secondly, when the hydrolysis time was about 4 hours later, the new polysaccharide began to be hydrolyzed. So we detected that the rising of the mannose and glucose concentrations. These results illustrated that DMP may be consisted of multiple polysaccharides, which had different hydrolysis rate. We also found that galactose cannot be released until hydrolysis time is 4 hours. This phenomenon also supported previous deduction. It was observed that TFA was suitable to achieve depolymerisation of DMP. Moreover, it was found that the TFA caused less damage to sugars than H2SO4 or HCl [30].

In order to confirm the above assumption, high performance gel permeation chromatography (HPGPC) was employed to estimate the homogeneity and molecular weight distribution of DMP. The molecular weight of polysaccharide was also an important factor responsible for biological activities [31]. As presented in Fig. 2, there were three broad, symmetrical peaks on the chromatograms, which means that the molecular weight distribution of DMP from left to right is continuously distributed and gradually decreased. The average molecular weights of the three fractions (DMP-1, DMP-2 and DMP-3) were estimated to be 153.1 kDa, 69.28 kDa and 50.14 kDa, respectively. The result suggested that DMP may be a complex mixture of multiple polysaccharides. 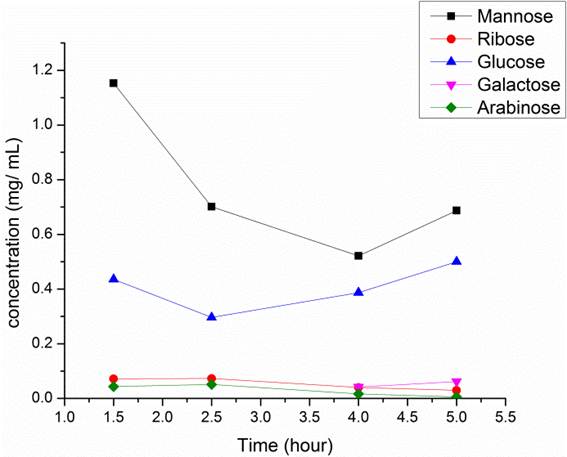 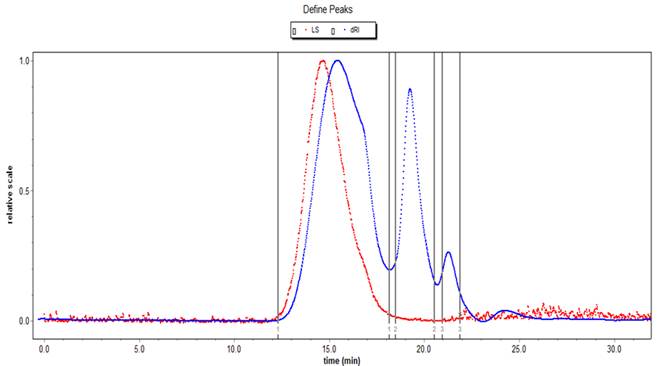 The lack of chromophores or fluorophores in the structure of monosaccharides limits their sensitive detection [30]. Therefore, carbohydrates are generally tagged with a suitable chromophore or fluorophore to obtain highly sensitive detection. The reagent 1-phenyl-3-methyl-5-pyrazolone (PMP) is one of the popular labels that react with reducing carbohydrate under mild condition, requiring no acid catalyst and causing no isomerization [32]. In the process of structural analysis of polysaccharides, the molar ratio of each monosaccharide in polysaccharides is one of the most important parameters.

The PMP-labeled monosaccharide standards were analyzed by HPLC system described above; the chromatogram is suggested in Fig. 3. Six PMP-labeled monosaccharides were separated successfully in the order of peak 1 for mannose, peak 2 for ribose, peak 3 for glucose, peak 4 for galactose, peak 5 for xylose and peak 6 for arabinose. In this study, the good separation of the six monosaccharide derivatives was achieved within 40 min. Table 1 is the summary of calibration curves, linear ranges and limit of detection. The results indicated that mannose and glucose were the major monosaccharides constructing the D. moniliforme polysaccharide (Fig. 4). The molar ratio of monosaccharide components was described as follows: mannose: ribose: glucose: galactose: arabinose = 51.83: 4.01: 38.90: 4.20: 1.65. It was clear that the predominantly composition monosaccharide in DMP was mannose up to 51.83%. 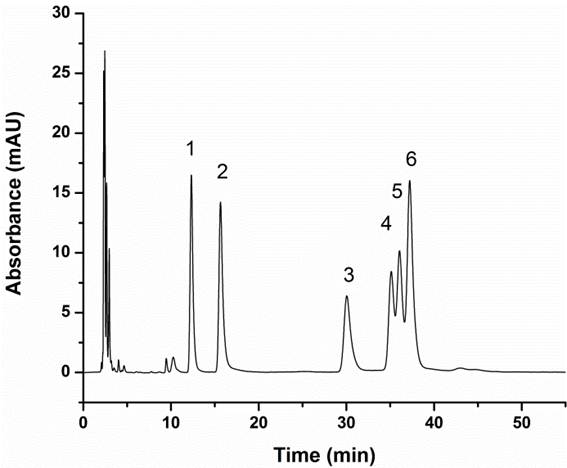 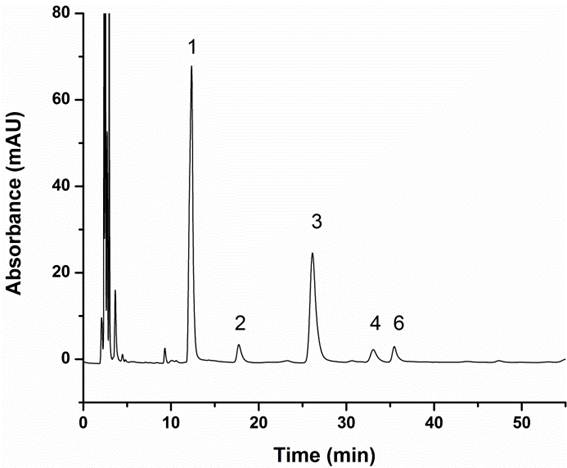 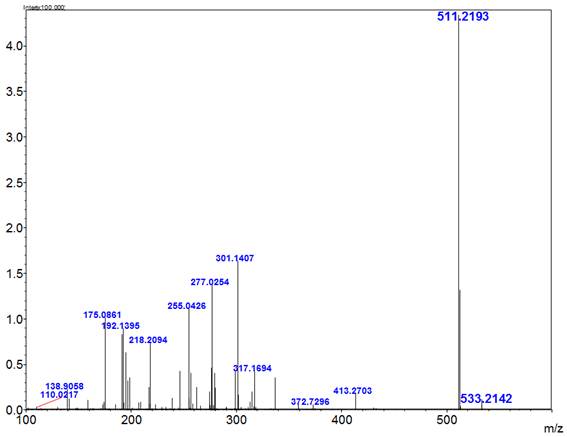 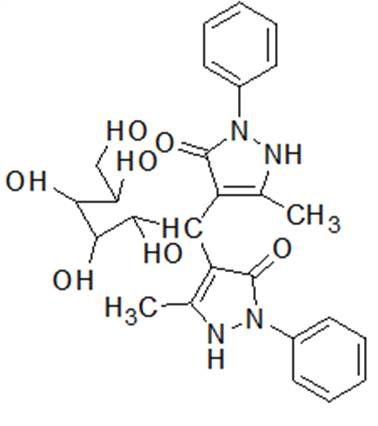 All PMP-labeled monosaccharides were characterized by LC-ESI-MS method. Carbohydrate derivatives show sufficient ionization information under ESI-MS in positive-ion mode. For example, PMP-labeled glucose comprises peaks of m/z 511.2193 and 533.2142 correspondent to [M+H]+ and [M+Na]+ by positive-ion mode (Fig. 5), which means that one molecule of glucose reacted with two molecules of PMP. Accordingly glucose-PMP is considered to have the structure given in Fig. 6. Since this compound has conjugated double bonds, it absorbs the UV light strongly, although it does not fluoresce. Other reducing monosaccharides are considered to react with PMP in a similar fashion. An intense protonated molecular ion at m / z [M+H]+ can be used for the accurately qualitative analysis of carbohydrates. When HPLC and MS are combined on-line, six PMP-labeled compounds were separated, among which five PMP-labeled monosaccharides were identified under under conditions as described in section 2.6.

Peaks 1, 2, 3, 4 and 6 could be unambiguously identified as PMP-labeled mannose, ribose, glucose, galactose and arabinose based on the comparison of retention times and MS data with those of authentic PMP-labeled monosaccharides. With this method, the carbohydrates from the hydrolyzed DMP can successfully be identified. From above evidence, polysaccharides from D. moniliforme mainly compose of mannose, ribose, glucose, galactose and arabinose (Table 2).

Table 1. The calibration ranges, LODs and precision for five monosaccharides.

In the present work, the crude polysaccharides were extracted and purified from the stem of D. moniliforme. And the method for monosaccharide analysis with PMP pre-column derivatization by HPLC-ESI-MS demonstrated that DMP consisted of D-mannose, D-ribose, D-glucose, D-galactose and L-arabinose with the molar ratio of 51.83: 4.01: 38.90: 4.20: 1.65. The method reported here is simple, rapid, convenient and reproducible, and proved to be suitable for the analysis of the monosaccharide components of D. moniliforme polysaccharides.

Hydrolysis procedure indicated that DMP may be consisted of multiple polysaccharides, which had different hydrolysis rate. For this reason, study on homogeneity and molecular weight distribution of DMP was followed by HPGPC. It was concluded that DMP contained three major polysaccharide fractions with molecular weight of 153.1 kDa, 69.28 kDa and 50.14 kDa. The information gained in this paper will be valuable for accurate qualitativing and quantitativing components of polysaccharides in D. moniliforme. In addition, further investigation should be done to better separate three major polysaccharide fractions.