Pteridophytes become the interest of horticulturist, especially that they were being used as ornamental plants (Bharrati et.al., 2013). It is characterized by an alteration of generation between a well-developed sporophyte producing gametes (Chang et.al., 2007). The mode of gametophyte formation through micro-propagation (using spores as extant plant) depends on various factors like different light spectra, pH, growth medium, plant hormones and nutrients used (Khan et. Al., 2008; Haddad and Bayerly, 2014). One way of conserving rare, endemic and economically important species of pteridophytes is through ex situ conservation. These are done by collecting live specimens from the wild and grow them in pots or in hanging baskets in the Fernery for propagation. These pteridophytes in the Fernery will also be the source of spores for spore culture to mass propagate slow growing species of pteridophytes (Amoroso, 2006). He recommended that spore culture should be conducted especially the species of pteridophytes which are slow growing and considered to be rare, endemic and economically important species.

Nephrolepis falcata is a fern plant under family Lomariopsidaceae which is found on shaded areas (Smith et al., 2006). Its rhizome is creeping, frond is simple pinnate, sori round and spores bilateral, monolete. This species was used as ornamental. Thus, there is a need to conduct an in vitro (spore) culture of Nephrolepis falcata.

Objectives of the Study

This study intends to propagate Nephrolepis falcata in vitro using the spores. Specifically, it aimed to:

1.   Find out the duration of the germination of Nephrolepis falcata spores.

Culture media was prepared by dissolving 15 g of agar in 980 ml of distilled water. The mixture was stirred continuously in a water bath until the agar was dissolved. Meanwhile, 0.5 g ammonium nitrate, 0.2 g potassium phosphate, 0.2 g magnesium sulfate, 0.1 g calcium chloride and 0.2 g ferric chloride was dissolved in 20 ml distilled water. The dissolved nutrients was placed in the agar mixture and placed in a water bath and stirred continuously until mixture was dissolved (Figure 1a).

2.2. Sterilization of Media and Apparatus

Empty bottles covered with used paper, culture media, bottles and other materials needed were sterilized in an autoclave at 15 psi for 15 minutes (Figure 1b, d and e).

A healthy fertile frond of Nephrolepis falcata was selected and cut from the fernery. The frond contains brown sori (Figure 1f).

2.4. Scraping and Sieving of Spores

The sporangia from the fertile frond was scraped using a dissecting needle (Figure 1g). Spores were then separated from the sporangia through sieving with fine mesh cloth (Figure 1h).

2.5. Sterilization and Inoculation of Spores

Inside the laminar flowhood, spores were transferred into a funnel with filter paper. Then, spores were sterilized with 10% chlorox (sodium hypochlorite). Sterilized distilled water was used to rinse the spores three times. Spores were then removed from the filter paper with sterilized watercolor brush and inoculated in agar culture medium (Figure 1i).

Stages of development were monitored from day zero (0) to the number of days when rhizoid emerges, germ layers and prothallial plate forms (Figure 1j). 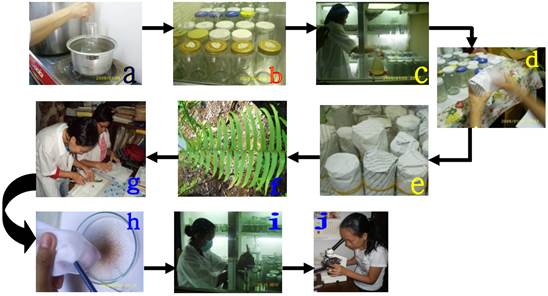 Nephrolepis falcata is a lepstosporongiate fern under family Lomariopsidaceae (Smith et al., 2006), formerly classified by Kramer et al. (1990) under Nephrolepiaceae, hence germination of its spore is Vittaria type of germination which is categorized as polar (Nayar & Kaur, 1971). 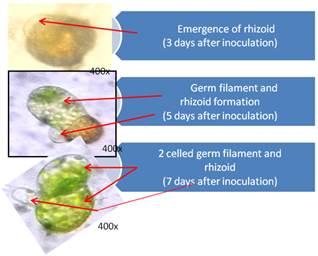 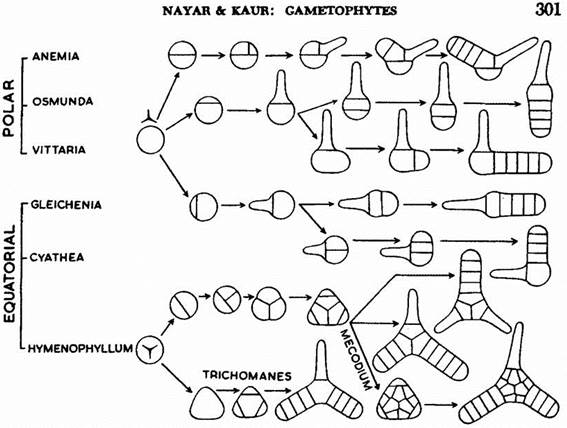 In Vittaria type (Nayar & Kaur, 1971) the spore cell grows and emerges from the lesure. The first division parallel to the equatorial plane of the spore separates a small hemispherical cell. The first rhizoid usually emerges from the basal cell. Successive divisions produce a germ filament with 1–6 cells (Herrero et al., 2002). 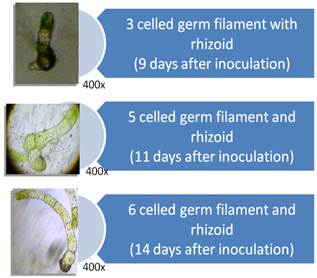 The bidimensional phase started between 15 and 20 days after germination, following the Adiantum type of development (Nayar & Kaur, 1969, 1971) This type of development is characterized by the formation of an oblique wall in the terminal cell of the filament; a cuneiform cell is differentiated, from which, after several divisions, a meristem is formed. Lateral symmetrical, cordate plate is produced. 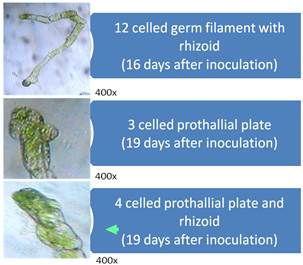 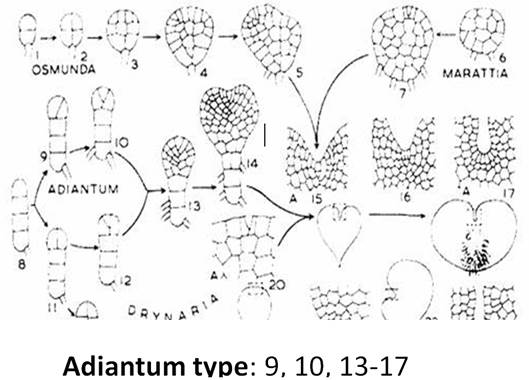 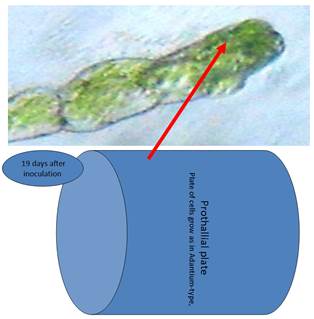 It is recommended that in vitro culture, using spore as explants, can be an effective method to propagate ferns like Nephrolepis falcata (Cav) C Chr.