Abstract: The study aimed to determine the potentials of various agro-ecosystem in producing favorable growth and yield of upland rice including biomass production and carbon storage. Results of the study revealed that hinumay and dinorado were performed significantly better in plant height, yield, biomass and carbon content as compared to other varieties. However, in terms of panicle length and number of tillers, it was found out that kawilan variety perform better but it is not significantly different with hinumay and dinorado. With the current findings, hinumay and dinorado were the best upland rice varieties to be cultivated under oil palm, coconut and rubber tree but not to banana agro-ecosystem. On the other side, for early flowering and maturity, it was found out that the 90 days variety significantly bear flower and matured earlier as compared with the other upland rice varieties.

Rice (Orayza sativa L.) which is mainly used as staple food crop now definitely occupies a major position among Philippines Agricultural crops. As a cereal staple it is consumed by more or less 80% of Filipinos mostly from Luzon and Mindanao regions (Vergara 1983).

The main reason for the low yield of upland rice in the farmer’s field is the high cost of production which is continuously rising following the price in crude of fossil oil products. Commercial fertilizer is among the inputs of which its price soared up to the highest level in the history. Hence, it is necessary to look for substitute fertilizer which could reduce dependency on commercial and synthetic fertilizer but could sustain the production of upland rice (Zamora 2005).

The current challenge for rice researched is to grow in size, in scope and ability to serve the pressing need for more upland rice products (Tanchuling 2005).

Rice is grown in the country in nearly all regions. In region XII particularly North Cotabato and specifically in the Municipality of Arakan, upland rice is one of the major crops grown for family consumption and even for supply to the market demand. Arakan has a vast covering of 69,321.56 hectares, thirty percent of this area is being utilized for agricultural purposes like crop production by the small holder and subsistence farmer sector that are known to be the prime mover of the Arakan economy (LUPA,2007). 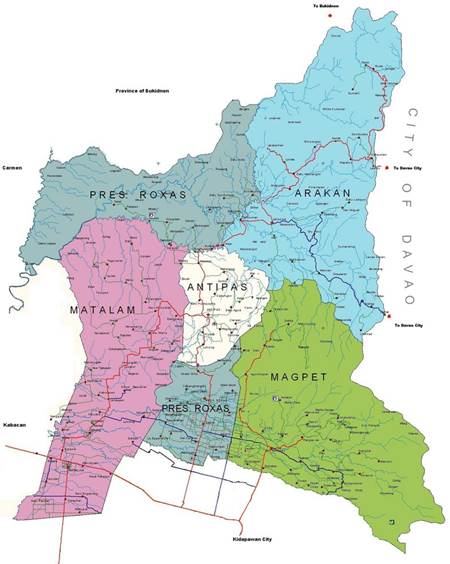 1.   Land Preparation. The area identified had been slashed, plowed twice and harrowed 2 times to obtain good soil porosity before planting

2.   Planting. Planting distance will be 25 cm per furrows and hills

3.   Fertilization. Vermi compost was applied 1 week before planting at a rate of 100 bags per hectare.

4.   Cultural Management. The crop were maintained by weeding, spraying, rouging and close monitoring on pests and diseases.

6.   Harvesting to Post-harvest Operation. Harvesting depends on the upland rice variety planted whether it is early or late maturing varieties. To ensure a good quality seeds, harvest it on time, post harvest activities like, drying and sacking.

There were three male farmer co-operators identified and served as maintenance and care taker of the experimental plots in the three barangays namely: Brgy. Doroluman Arakan, (Located at CFCST); Brgy Arakan Matalam; and Brgy Libpas Pres. Roxas, all of Cotabato Province. Their age ranges from 30-36 years, all married with an average siblings of 4 and estimated monthly income of five thousand pesos (Php 5,000,00) from fishing, gardening and contract of work.

The three farmer co-operators were all magindanawn (Islam in religion). They have cultivated an average upland rice of 1 ha each with other farm commodities such as corn and plantation crops (banana, coconut and rubber trees).

Table 1. Shows the biophysical characteristics of the three sites.

Hinumay found to have higher percentage of germination in Arakan and Pres. Roxas location of 92.5% and 90% respectively. While dinorado has higher germination of 92 percent in Matalam site (Figure 2)

2.3.2. Agronomic Characteristics of the Upland Rice

Hinumay and dinorado upland rice varieties were found to be significantly taller in height (176cm and 156cm) as compared to other varieties tested. For the length of panicles, kawilan (35cm) has the longest panicle but not significantly different with the panicle length of hinumay, dinorado and the 90 days varities (Table 2).

Kusin 2002 stated that hinumay and dinorado were the same upland rice varieties that grows taller as compared to other indigenous varieties in Arakan Cotabato.

Kawilan also found to have the most number of tillers (33.7) but this number did not differed significantly with the tillers of hinumay and dinorado as revealed in the Duncan Multiple Range Test. According to Kusin 2002, hinumay and dinorado produces more tillers when applied with organic fertilizer.

For the days to flowering, it was found out the 90 days and kawilan varieies early bear flowers (55 days and 58 days).

At 93 days, the 90 days variety matured significantly as compared to the other treatments. However, this maturity days did not vary significantly with maluwa of 105 days.

The same results had been found for biomass and estimated carbon content. Dinorado and hinumay has the highest biomass and carbon content (table 3). The study of Kusin 2002 revealed that hinumay produces more yield but the difference is not significant with dinorado variety applied with organic fertilizer.

2.3.4. Yield of the Different Agro-ecosystems 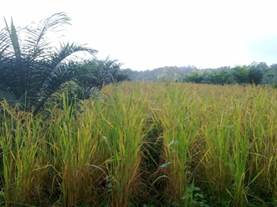 Upland rice with Palm oil has the highest yield found (Table 4). Dinorado (7,567.5kg/ha) and hinumay (8,253.05kg/ha) significantly higher in yield but it is not significantly different with yield under rubber and coconut plantations. The least yield of upland rice was found under banana plantations and found out that the different varieties perform insignificantly under this agro-ecosystem.

Figure 3 shows the upland rice along alleys of palm oil.

• The early maturing variety is 90 days and maluwa

• Carbon storage potential of upland rice will reach to a maximum of 0.18 Mt per ha.