The concept of micropolar fluid deals with a class of fluids that exhibit microscopic effects arising from the local structure and micro motions of the fluid elements. These fluids contain dilute suspension of rigid macromolecules with individual motions that support stress & body moments and are influenced by spin inertia. Micropolar fluids are those, which contain micro-constituents that can undergo rotation, the presence of which can affect the hydrodynamics of the flow so that it can be distinctly non-Newtonian. It has many practical applications, for example analyzing the behavior of exotic lubricants, the flow of colloidal suspensions or polymeric fluids, liquid crystals, additive suspensions, human & animal blood, turbulent shear flow & so forth. The theory of micropolar fluids was proposed by Eringen in 1966. In this theory, the local effects arising from the microstructure and the intrinsic motion of the fluid elements are taken into account. Physically, the micropolar fluid can consist of a suspension of small, rigid cylindrical elements such as large dumbbell-shaped molecules. The theory of micropolar fluids is generating a very much-increased interest & many classical flows are being re-examined to determine the effects of the fluid microstructure [6].

Therefore the aim of this research is to investigate the micropolar fluid behavior on MHD free convection and mass transfers flow with constant heat and mass fluxes. The problem is solved by finite difference method in case of two-dimensional steady flow and obtained results are shown graphically as well as in tabular form.

has been considered. The flow is assumed to be in the

-axis is normal to it. The microrotation is

is the angular velocity acting in z-direction (the rotation of

is in the xy plane). The temperature and the species concentration at the plate are constantly raised from

respectively, which are thereafter maintained constant, where

are the temperature and species concentration of the uniform flow respectively. A uniform magnetic field

is imposed to the plate (

) to be acting along

which is assumed to be electrically non-conducting. The level of concentration of foreign mass is assumed high so that the thermal diffusion and mass diffusion are considered. The magnetic field is of the form

and the magnetic lines of force are fixed relative to the fluid. The equation of conservation of charge

is the current density, the direction of propagation is considered only along

and does not have any variation along the

and the derivative of J with respect to y namely

. Since the plate is electrically non-conducting, this constant is zero and hence

0 at the plate and hence zero everywhere. 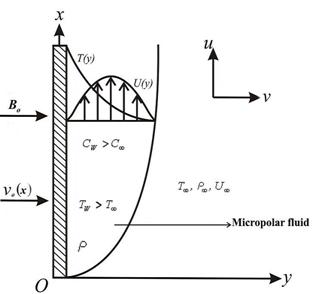 Since the plate occupying the plane

is of semi-infinite extent and the micropolar fluid motion is steady, all physical quantities will depend only upon x and y. The boundary layer flow is driven by the buoyancy forces (Fig.1). The constant property conditions of the gravity force act in the negative x-direction. Also with one exception, assume the micropolar fluid to be incompressible. The exception involves accounting for the effect of variable density in the buoyancy force (so called Boussinesq’s approximation), since it is the variation that induces micropolar fluid motion. The x-component momentum equation (2) reduces to the boundary layer equation if the only contribution to the body force is made by gravity, the body force per unit volume is

, where g is the local acceleration due to gravity. There is no body force in the y-direction (

. Therefore the x-component of the momentum equation become

is the density of the surrounding fluid at temperature

is related to the temperature and mass differences

respectively through the volume expansion coefficient

and the volumetric coefficient

Thus mathematically the problem reduces to a two dimensional problem. With the help of equation (8), the equations (1)-(7) become

are considered to be small. Let

be the order of magnitude of

. Let the order of magnitude of

. The order of magnitude of

are considered to be

be the thermal boundary layer thickness and

be the order of magnitude of

. Let the order of magnitude of

within the boundary layer.

The steady two dimensional MHD free convection and mass transfer micropolar fluid flow, past a semi-infinite vertical porous plate is considered. The x-axis is taken along the heated plate in the upward direction and the y-axis normal to it. The plate is immersed in a micropolar fluid of temperature T. A magnetic field B of uniform strength is applied transversely to the direction of the flow. The magnetic Reynolds number of the flow is taken to be sufficiently small enough, so that the induced magnetic field can be neglected in comparison with applied magnetic field so that

is the uniform magnetic field acting normal to the plate. The flow configuration and the co-ordinate system are shown Fig.1. Within the frame work of the above noted assumptions, the flow of a steady viscous incompressible micropolar fluid flow subjected to the Boussinesq approximation can be written in the following form:

The boundary conditions for the problem are:

are the velocity components in the

is the kinematic viscosity, g is the acceleration due to gravity,

is the coefficient of volume expansion,

is the volumetric coefficient of expansion with concentration.

are the corresponding concentrations. Also

is the thermal conductivity of the medium, Q is the constant heat flux per unit area,

is the coefficient of mass diffusivity,

is the specific heat at constant pressure,

is the mean fluid temperature,

is the concentration susceptibility,

is the electrical conductivity,

is the vortex viscosity,

is the spin gradient viscosity,  j is the microinertia per unit mass, m is the coefficient of mass flux per unit area and s is a constant (when

which represents no-spin condition i.e., the microelements in a concentrated particle flow close to the wall are not able to rotate. The case

represents vanishing of the anti-symmetric part of the stress tensor and represents weak concentration. In a fine particle suspension of the particle spin is equal to the fluid velocity at the wall. The case

represents turbulent boundary layer flow) and other symbols have their usual meaning.

Since the solutions of the governing equations (15)-(19) under the initial conditions (20) & (21) will be based on the finite difference method it is required to make the said equations dimensionless. For this purpose we now introduce the following dimensionless quantities:

Using these relations we have the following dimensionless equations

We attempt to solve the governing second order nonlinear coupled dimensionless partial differential equations with the associated initial and boundary conditions. For solving a transient free convection flow with mass transfer past a semi-infinite plate, Callahan and Marner(1976) used the explicit finite difference method which is conditionally stable [1]. On the contrary, the same problem was studied by Soundalgekar and Ganesan(1980) by an implicit finite difference method which is unconditionally stable [13]. The only difference between the two methods is that the implicit method being unconditionally stable and is less expansive from the point of view of computer time. However, these two methods produced the same results.

From the concept of the above discussion, the explicit finite difference method has been used to solve equations (22)-(26) subject to the conditions given by (27) and (28).

To obtain the difference equations the region of the flow is divided into a grid or mesh of lines parallel to X and Y axis is taken along the plate and Y-axis is normal to the plate. Here we consider that the plate of height

, with the smaller time-step

denote the values of

at the end of a time-step respectively. Using the explicit finite difference approximation we get the difference equations in the following forms:

Here the subscripts i and j designate the grid points with x and y coordinates respectively and the superscript n represents a value of time,

. From the initial condition (34), the values of

. During any one time-step, the coefficients

appearing in equations (29)-(33) are treated as constants. Then the end of anytime step

at all interior nodal points be obtained by successive applications of equations (30), (31), (32) and (33) respectively. This process is repeated in time and provided the time-step is sufficiently small,

should eventually converge to values which approximate the steady state solution of equations (22)-(26).

In this paper, the effects of Micropolar fluid behavior on MHD free convection and mass transfer flow with constant heat and mass fluxes have been investigated using the finite difference technique.  To study the physical situation of this problem, we have computed the numerical values by finite different technique of velocity, micrirotation, temperature and concentration at the plate. It can be seen that the solutions are affected by the parameters namely, Microrotation parameter

and the vortex viscosity parameter

, Magnetic parameter (M), Eckert Number (Ec), Dufour Number (Df), Schimidt Number (Sc), and Soret Number (So). The main goal of the computation is to obtain the steady state solutions for the non-dimensional velocity U, temperature

for different values of Microrotation parameter

and the vortex viscosity parameter

, Magnetic parameter (M), Eckert Number (Ec), Dufour Number (Df), Schimidt Number (Sc), and Soret Number (So). For this computations the results have been calculated and presented graphically by dimensionless time

. The results of the computations show little changes for

. But while arising at

and 80 the results remain approximately same. Thus the solution for

are become steady-state. Moreover, the steady state solutions for transient values of U,

respectively. From these figures are observed that the velocity increases with the increase of Grashof Number

. When it arising at

, the solutions become steady-state. The effects of temperature are shown in figures (10-17) for different values of Prandtl Number

respectively. It is seen from these figures that the temperature decreases with the increase of Prandtl Number

. The concentration effects are shown in figures (18-25) for different values of Schmidt Number (Sc), at time

respectively and is clear from these figures that the concentration decreases with the increase of Schmidt Number (Sc). The results remain approximately same while arising at time

and 80. Effects of microrotation are shown in Figures (26-33) for different values of Spin gradient viscosity parameter

respectively. It is seen from these figures that the microrotation decreases with the increase of Spin gradient viscosity parameter

Micropolar fluid behavior on MHD free convection and mass transfer flow with constant heat and mass fluxes have been investigated in this work. The resulting governing dimensionless coupled non-linear partial differential equations are numerically solved by an explicit finite difference method. The results are presented for different values of important parameters as the Grashoff Number, Prandtle numbe, Schmidt number and Spin gradient viscosity parameter with the fixed value of Modified Grashoff Number. The obtained important findings are listed below:

ii       The temperature profiles decrease with the increase of Prandtle number (Pr). Particularly, due to increase of time the fluid temperature is shifted to upward direction.