Abstract: The inclusion of stochastic interest rate is an essential element of any realistic option pricing method. Therefore, the purpose of this paper is to incorporate interest rates in the Fourier transform method for pricing European options in exponential Levy models. With the assumption of stochastic independence between the underlying log asset price and the stochastic interest rate, we obtain a pricing of pure discount bond available in the market. Our method of valuation is to apply eigenfunction expansion to the variable that describes the evolution of the interest rate, and Fourier transform to the variable that describes the log asset price.

The first acceptable contribution to the field of quantitative modelling of derivative securities is given by Black and Scholes [1], in which the price of a European option on an underlying asset with price process given by a geometric Brownian motion was given in close-form. However, in most exponential Levy models and stochastic volatility models, analytic formula for the option price does not exist. Hence, alternative methods are sought. One of such approaches is the Fourier transform and inversion methods, since it has been observed that when characteristic function of the density function is mapped to the option payoff in Fourier space, option prices are easily calculated much easier for some of the much complex processes. The idea behind Fourier transform is to take an integral of the payoff function over the probability distribution function, where the probability distribution function is obtained by inverting the corresponding Fourier transform.

In mathematical finance, Fourier transform method was first used in Stein and Stein [3] volatility model, to obtain the distribution of the underlying asset price. This was followed by Heston [2], where through characteristic function, obtains an analytical formula for the valuation of European options when the volatility of the underlying asset price is stochastic. Following these two papers, quite a lot have being written on the application of Fourier transform and inversion methods in the valuation of more complex contingent claims. For example, Carr and Madan [4] introduces fast Fourier transform algorithm for the numerical valuation of the Fourier integral encountered in option pricing. Since then, fast Fourier transform algorithm has become an efficient mathematical tool used in mathematical finance in the valuation problems, e.g. see [10, 7, 8, 12, 13]. A more general pricing framework was developed in Lewis [9] by separating the underlying asset price from the option payoff through the use of Plancherel-Parseval theorem. Through his method, a variety of pricing formula for different types of contingent claims can be obtained. For other applications of Fourier transform methods to option pricing, see [5,6,8] and bibliographies therein.

All the existing Fourier transform methods in option pricing known in literature make a simplifying assumption that the interest rate in the market remain constant throughout the life of the option. This assumption is not generally true, especially when pricing options of long maturity, as interest rates are bound to change, and this level of change is not known before time (that is, it is stochastic). Therefore, the contribution of this paper to the existing literature on Fourier transform method for option pricing is to incorporate stochastic interest in pricing European style contingent claim under the assumption that the underlying log asset price

is an exponential Levy process. Therefore, to price the European option, we assume that the interest rate,

, is a stochastic function of the Markov process

that models the log-asset of the firm, and apply the eigenfunction expansion with respect to the variable

that describes the evolution of interest rate.

is the infinitesimal generator of the process

The remaining of this article is organized as follows: in the remaining part of section one, we discuss the preliminaries, which include Fourier transform and characteristic function, Levy process and its theory and eigenfunction expansion. In section two, our main method for pricing European option with stochastic interest rate is presented. This is the joint application of eigenfunction expansion and Fourier transform. In section three, we process our numerical result, discuss the result and conclude the article.

be a piecewise continuous real function which satisfies the condition

The Fourier transform of

defined for any complex variable

This transform is known to exist and is analytic for all

The inverse of the transform through which the function

can be recovered is

Levy processes are becoming very popular in mathematical finance because they have been discovered to describe the observed reality of financial markets more accurately than models with Brownian motion such as geometric Brownian motion of Black and Scholes [1]. In real world, it is known that asset price paths do exhibit jump or spikes, and these have to be taken into account in order to manage risks efficiently. Moreover, the empirical distribution of asset returns exhibits fat tails and skewness. These show that the distribution of asset returns are far from being normal, as predicted in Brownian motion models. Levy processes are known to possess the appropriate properties that accurately describe all these properties of asset price and its returns in the real world and risk neutral world.

By definition, a Levy process

is stochastic processes with stationary and independent increments, and it is continuous in probability. A general 1-dimensional Levy process can be represented as

is a 1-dimensional Brownian motion,

is a compound Poisson process which includes the jumps of

is a compensated compound Poisson process which includes the jumps of

The characteristic function of the distribution of

can be represented in the form

The function ψ is called the characteristic exponent for

. the general form of characteristic exponent of any Levy process can be deduced from the Levy. Khintchine formula

is a measure on ℝ\0 satisfying

is called the Levy triple for Xt. The proof of this Levy – Khintchine formula can be found in Cont and Tankov [21]. The known exponential Levy models in financial modeling literature correspond to assigning different values to

. For example, the case where F(

is a finite measure and

an infinite measure, and

gives rise to pure jump model of infinite activity, e.g. Variance Gamma (VG) model of Madan, et al [24], Normal Inverse Gaussian model of Barndorff-Nielson [25], etc. As an example in this article, we use a VG process whose density of jumps is given by

is an indicator function of the interval (a, b). The coefficients c+ (respectively, c-) gives the intensity of upwards jumps (respectively, downward jumps). The characteristic exponent

of the VG process can be obtained using (4):

1.3. Eigenfunction Expansion for the Bond Price

Consider a pure discount bond that pays the owner a certain unit amount of currency at maturity date T. The price

of this bond at time

is the interior of

is the risk-neutral measure chosen for pricing. In the CIR (1985) model, the variable

is one dimensional Brownian motion. In (6), we assume that the feller condition,

we obtain the backward Kolmogorov equation

is the infinitesimal generator of the process

is diagonalizable so that we can expand

are the orthogonal eigenfunctions of

are the coefficients of expansion given by

is the measure on

chosen so that the infinitesimal generator

becomes unbounded in the Hilbert space

with discrete spectrum, and

Is the inner product in

. We can now expand the bond price

. Then, (11) is an infinite system of disjoint scalar first order ordinary differential equations for

. This is solved to get

. therefore, the eigenfunction expansion (10) for the bond price becomes

Hence, if the constant of expansion

converges fast, and if the eigenvalues and eigenfunctions are known, then with moderately few terms, the series (12) can be truncated appropriately to find the approximation to the bond price. Suppose the risk-free interest rate is quadratic function of the stochastic variable

can be transformed to the operator of the simple Harmonic oscillator whose eigenvalues and eigenfunctions are well known. The transformed infinitesimal generator becomes

are constants to be determined in the transformation,

is the operator of the simple harmonic oscillator.

The normalized eigenfunctions of

can be generally written as

, and the corresponding eigenvalues are

are the Hermite polynomials, and

means the largest integer which is not greater than

. it is verifiable that

We use the following theorem from [17] which we state without proof.

1.  The eigenfunctions of the transformed infinitesimal generator

are the eigenvalues of

With these, the eigenfunction expansion for the bond price becomes

The detail of this transformation can be found in [17] 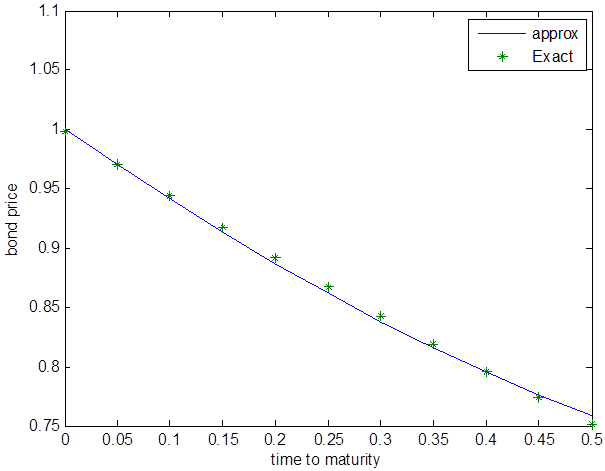 We begin by choosing a risk neutral measure Q, suitable for pricing options on the underlying stock or index

is a Levy process of exponential type

. In the presence of stochastic interest rate, the time 0 < T price of a European option with payoff

can be written as

are independent, we can write (14) to be

. Then, the value of the option can be written as

Suppose there exists some

is integrable, we can decompose H into Fourier integral to get

Using the characteristic function for the distribution of X, we can write (20) as

is the so-called characteristic exponent for the Levy process X. the payoff for European call and put options with strike price K are

respectively. Hence, using (18), we have

for call option and

for put option. The major task in applying Fourier transform to pricing European option is the evaluation of the integral in (21). To do this, we truncate the integral and discretize the integrand. This involves choosing a convenient grid

is the grid size

In this section, we implement the method discussed in We consider this paper. We experiment with the following parameters: For the Levy process, we use

(since we are considering pure jump process),

For the CIR interest rate process, we use

. We experiment with different stock prices with fixed strike price, K = 100 for both European call and put options. The result of our calculations are presented in Table 1 and Table 2 for call and put options respectively. In this tables, N represent the number of simulations used in (22).

Pricing European options with short maturity date on a given stock, may not require change in interest rate. But when the maturity date is long, it is necessary to consider the possibility of stochastic change in the level of interest rate in the market. In this article, we have succeeded in incorporating stochastic interest rate in the Fourier transform method for valuing European-style contingent claim on a stock driven by an exponential Levy process. Moreover, the tables above reveals that the method of simplified trapezoid rule adopted here for evaluating the Fourier integral converges fast, thereby allowing the option value to be computed fast.