Abstract: The present study analyses the psychometric properties of the Self-efficacy in Academic Behaviors Scale in men and women university students. The overall sample consisted of 2006 subjects: 902 women and 1104 men, with a mean age of 18.53 years (SD= 1.52) and 18.84 years (SD= 1.55) respectively. Psychometric analysis showed that a three-factorial structure (Communication, Attention and Excellence) was viable and adequate for both populations (men and woman) according to the established psychometric requirements when the informers are the students themselves. In addition, the factor structure, factorial loads and intercepts are considered invariant in the two populations; however, there are differences between groups in favor of women for the means of the three factors.

Within educational contexts there has been an ongoing interest in understanding the cognitive and behavioral factors that help or hinder student achievement in their academic work and how it relates to their overall development. In the area of educational psychology specifically, the construct of self-efficacy has received special attention and have led to significant research advances that have contributed to the improvement of pedagogic and teaching practices [1]. Empirical research has amply demonstrated that self- efficacy is found to be more predictive of academic achievement than other cognitive variables [1-3] also by predicting subsequent success [4] and is an important cognitive mediator of competence and efficiency [5,6] as it benefits cognitive processes.

Self-efficacy refers to the belief that one can achieve the desired results and is a central construct in Bandura's social cognitive theory [7,8]. According to the theory, self- efficacy of an individual is a fundamental factor in the interaction between the environment and the behavior of the individual [8]. Self-efficacy can be specific or general. The specific self-efficacy describes the beliefs of an individual on which he can achieve good results in a defined area of his life, for example their academic performance. While the general self-efficacy is in a sense overall the individual's competence in handling a variety of life challenges. Both types of self-efficacy are relatively stable and can be characterized as traits [9].

Several studies [10-14] have been established, broadly, that a high academic self-efficacy is associated with better results as far as academic performance is concerned; showing that is not enough to be capable of, is necessary to be judged as capable. Revealing that people with the same level of skill and knowledge have different behaviors and/or results, or why people act in dissonance with their skills [1,15]. Showing that self-efficacy beliefs in one's capacity are essential to master the academic activities; since students who trust in their capacities are more motivated to achieve their goals [16,17].

Therefore, perceived self-efficacy plays a key role in human functioning since, affects behavior not only directly, but also for its impact on other key determinants such as goals and aspirations, outcome expectations, affective tendencies and perception of the impediments and opportunities that arise in the social environment [18,19].

This instrumental study [20] aims to provide empirical support to the factorial division of the Academic Self-Efficacy Scale in the Field of Teamwork and Leadership in Mexican university students; which it is justified by the importance of checking the factorial structure of an instrument and the psychometric equivalence of it in different groups; since in the context of intergroup comparison, it is essential to consider the need to carry out the adaptation of an instrument of psychological measure that fulfills all the criteria of equivalence, but above all consider whether the same factorial structure is applicable to different groups of individuals [21,22].

This paper aims, on one hand, to investigate whether the psychometric results proposed by [23] for the Academic Self-Efficacy Scale in the Field of Teamwork and Leadership are replicated and, secondly, expand them. For this, in the first place it will be checked the degree of congruence of the factorial structure of the scale obtained in this study and the one reported by reference [23]. Secondly, is calculated the factorial invariance between the samples of the present study.

Self-Efficacy in Academic behaviors Scale (EACA) designed by [24] is a Likert questionnaire assisted by computer of 13 items related to academic behavior; where the respondent answers on a scale of 0-10, how often currently, ideally if he strives to change, would make or manifest an action (Figure 1). 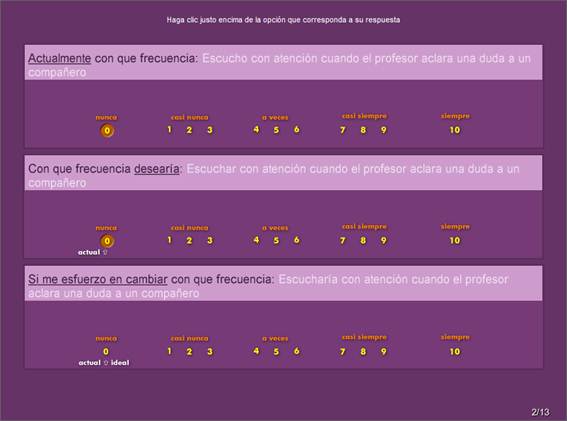 Figure 1. Example response for each item of the questionnaire.

Although each individual responded to the 13 items of instrument in three different scenarios: scenario of perceived ability, scenario of interest in being capable and scenario of change of being capable to; in the psychometric analysis only the answers to the first stage were used.

Students of the degrees offered at the Autonomous University of Chihuahua were invited to participate; those who agreed to participate signed a consent letter. Then, the instrument explained above was applied through a computerized application using the instrument administrator module of scales editor, version 2.0 [25] in a session of about 25 minutes in the computer labs correspondent to each participating academic unit.

At the beginning of each session students were given a brief introduction on the importance of the study and how to access the instrument; instructions of how to answer were on the first computer screens, before the first instrument item.

At the end of the session students were thanked for their contribution to the study.

Once the instrument was applied, data was collected by the results generator module of scales editor, version 2.0 [25].

The psychometrical analysis was applied in two stages: 1) Factorial Confirmatory Analysis and 2) Invariance Factorial Analysis; so that it could obtain evidence that presents the best properties for the scores confirmation of Academic self-efficacy in woman and men university students.

To conduct the confirmatory factorial analysis for each sample, AMOS 21 software was used (Arbuckle 2012), variances in terms of error were specified as free parameters, in every latent variable (factor) a structural coefficient was set associated to one, so that scale was equal to the superficial variables (items). The estimated method used was the maximum credibility; following the recommendation of [26], so when the confirmatory factorial analysis is used, it is necessary to verify not only the adjustment of the theoretical model but it is recommended to compare the fit indices of some alternative models to select the best.

Finally, an analysis of the factorial invariance of the models of measurement obtained was made, following the recommendations of [21], and was calculated the reliability of each of the dimensions through Cronbach's alpha and Omega coefficient [28].

According to the results obtained in Table1 in the Confirmatory Factorial Analysis of 13 items grouped in two factors in the sample of women is optimal (GFI. 965 y RMSEA. 053) and according to the incremental adjustment measures and Parsimony meaningfully superior to the independent model and very similar to the saturated model.

Table 2. Standardized solutions for the confirmatory factor analysis in both samples.

Furthermore, confirmatory factor analysis on the sample of men (Table 1) shows again the measuring model of two factors is optimal (GFI. 977 y RMSEA. 044) and according to the incremental adjustment measures and Parsimony meaningfully superior to the independent model and very similar to the saturated model.

According to the results of Table 2, in both samples, most of the items properly saturate in their dimension (factor) provided. High intercorrelations observed between the two factors showing a not very adequate discriminant validity.

Invariance of the factorial structure among men and women university students

The fit indices obtained (table 3) allows to accept the equivalence of the basic measuring model among the two samples. Although the value of chi-squared exceeds the demanded one to accept the invariance hypothesis, the rest of the indices contradict this conclusion (GFI. 971; CFI. 970; RMSEA. 033; AIC 511.396) this allows us to accept the base model of invariance (model without restrictions).

Adding the base model restrictions on factorial charges, metric invariance is characterized. Values obtained from table 3 permit to accept this invariance level. The Goodness of fit index (GFI=. 969) and root mean square error of approximation (RMSEA=. 033) continue offering convergent information in this direction. Besides Akaike information criterion (AIC= 518.842) and Bentler comparative fit index (CFI=. 969) do not suffer big variations toward the previous model. Using the criteria for the evaluation of the nested models proposed by [29] who suggest that if the calculation of the difference of the CFI of both nested models diminish in. 01 or less, the restricted model is taken for granted therefore the compliance of the factorial invariance. The difference of the CFIs obtained allows to accept the metrical invariance model. We can conclude up to this point that factorial charges are equivalent in the two samples.

Having demonstrated the metric invariance between samples, we evaluate the equivalence between intercepts (strong factorial invariance). The Indices (Table 3) show a good adjustment of this model, evaluated independent as well as analyzed toward nesting with the metric invariance model. The difference between the comparative indices of Bentler is. 009; and the general adjustment index is. 963 and the root mean square error of approximation is. 036. Accepted then the strong invariance, the two evaluated models are equivalent toward the factorial coefficients and the intercepts.

The factors obtained in the confirmatory factor analysis reached internal consistency values greater than. 75 in both samples (male and female); demonstrating adequate internal consistency for these subscales, particularly when it is considered the small number of items (Table 4).

Contrasts of the means of the factors among women and men

Once proved the factorial invariance, the differences among the means of the factors from the two groups were estimated taking as a reference the men’s sample, establishing 0 as the value of the means for this sample, considering freely the value of the means for the sample of women. Restrictions about regression coefficients and intercepts required for the contrast among the means made automatically through the software AMOS 21 (Arbuckle, 2012). The results of the comparisons between means indicated that the mean of Communication, Attention and Excellence factors were significantly higer (0.167, p <0.001; 0.163, p <0.05 y 0.573, p <0.001 respectively) in women; with no difference in the Emprendedor

Table 3. Goodness of fit indices of each of the models tested in the factorial invariance.

Table 4. Coefficient omega and alpha for the factors obtained.

From the results, analysis and discussion shown, and taking in consideration the main objective of this study which was to examine the factorial structure and the measure of the invariance of this structure in university students, we can conclude the following:

1) The Confirmatory Factorial Analysis, in both samples, indicated that the adjustment of the data to the theoretical model of 13 grouped items in three factors is optimal. At the same time that the three factors obtained present in general adequate standardized factorial saturations. Meanwhile the factors correlate among themselves in a positive way and statistically significant, which shows that, as Self-Efficacy perceived increases in some of the factors, the other two factors increase as well. Results corresponding to those obtained by [24]

2) The factors in both samples showed adequate internal consistency, particularly when considering the small number of items in each.

3) Along with all the above, the results of the analysis of the factorial invariance between samples; indicate a high congruence between pairs of factors. It is suggesting the existence of strong evidence of cross-validation of the measure and therefore the stability of the structure, until the contrary is proved.

4) The comparisons between the groups reflect significant differences in favor to women, in the mean of the three factors. It was suggesting that women perceive themselves a little more self-efficient than men in relation to Communication, Attention and Excellence factors.

In summary, the analysis of the psychometric properties has shown that a three-factor structure is viable and appropriate in accordance with established psychometric requirements when informants are the students themselves. The structure of three factors, based on statistical and substantive criteria, has shown adequate indicators of adjustment, reliability and validity. However, we believe that further studies are necessary in order to corroborate or refute the data obtained in this investigation.