Abstract: The present study analyzes the psychometric properties of the Body Image Anxiety Scale (BIAS) trait-version test on Health and Social Sciences college students. The total sample included 1,113 participants: 524 Health Sciences students and 589 Social Sciences students with an average age of 18.20 years (SD=0.72) and 18.24 years (SD=0.74) respectively. The exploratory and confirmatory factorial analyses showed a viable and adequate bifactorial structure for both, Health Sciences and Social Sciences, populations according to the established psychometric requirements set when the informants are the students themselves. Furthermore, the factorial structure, loads, and intercepts are invariant in both groups; nevertheless, there are average weight differences between both populations.

The current Western aesthetic norms dictating body image may impact male and female psychological development. However, it is females, pre and teenagers, who more frequently tend to experience body-image development conflicts leading to eating disorders [1,3]. These conflicts are due to the especially rigid standards on "beauty and thinness" applied to women [4].

Ideal thinness and weight concerns are the result of a cultural concept, which even though is nowadays considered aesthetic, is just an unhealthy fad. This unattainable fashion may generate negative consequences, such as shape and weight concerns channeled through body image dissatisfaction. Such concerns are expressed via physical disdain and/or body image distortion, defined as inaccurate body sizing [5,6].

In the past few years, body image has reached a peak in modern societies. There is a subculture based on the importance and perception of the ideal physique [7]. The wish to lose weight or stay thin has become a core value in our culture and has permeated most of us. The generalized and emotional motivation to lose weight is a key risk factor for eating disorders [8].

Research on anxiety has traditionally been made in the psychological and psychiatric fields. Psychology traces anxiety as an altered emotional state, influenced by elements in the social environment and as a permanent personality trait reflecting individual differences derived from intrinsic elements [9,10] analyzed on the basis of psychometric tools. Psychiatry studies anxiety as a disease or mental disorder, based on qualitative categories from a case-study perspective offered by the Diagnostic and Statistical Manual of Mental Disorders (DSM) from the American Psychiatric Association (APA).

This study is grounded on the psychological perspective on anxiety. Psychological measuring tools are used on a clinically sound population to observe their anxiety levels, state, and trait on their body image [11,12].

The purpose of the present study is to analyze the inner consistency and the factorial structure of a self-report instrument that allows researchers to identify body-related anxiety. The specific body areas observed correlate to body weight; for instance, hips, abs, and waist. Moreover, the instrument also focuses on beauty-related body parts not affected by weight, such as the nose, forehead, ears, and hands. The data and evidence resulting from this study will aid in the implementation of an educational intervention focused on school diversity.

This paper emphasizes not only the instrument’s factorial structure, but also its psychometric equivalence in different groups, since in the intergroup comparative context it is of foremost importance to adapt a psychological measurement device which meets all equivalence criteria. Specially, the key issue to be considered is whether the same factorial structure applies to different groups, and in a broader sense, different populations [13-15]. This consideration is relevant since it provides our universities with valuable information for the tutoring and personal development systems. The resulting evidence and data will foster an educational intervention focused on school diversity.

The original version of the Body Image Anxiety Scale (BIAS) consists of a 15-item questionnaire assessing weight-related anxiety-trait (Weight Factor, 8 items) and non-weight-related body areas (No weight Factor, 7 items). On a 0 to 4 scale, participants express how anxious, apprehensive, or nervous they feel about specific body areas. According to Raich [11], BIAS has a sound inner consistency and reliable validity and temporal stability, which agrees with the inner consistency and validity indexes reported by Ornelas, Gastélum, Blanco and Peinado [16] using Cronbach alphas and congruency coefficients above.9. BIAS is a friendly-application survey [17] which provides a good, first-order basis to arrange individuals on the feature being gauged.

For the purposes of this study, the original questionnaire underwent three modifications:

First modification: the original scale provides five choices for every item; in the version used in this study, the individual may choose among eleven possible answers. There is a blend of the original BIAS and our version of it. The following is the scale as used in this study: nothing (0), slightly (1, 2, 3), moderately (4, 5, 6), a lot (7, 8, 9), and too much (10). The reason for this first revision is to match the survey’s scale to the standard 0 to 10 academic grading scale students are used to in Mexico. Viciana, Cervelló and Ramírez [18] report a similar change on a scale validation including quite similar characteristics on Spanish population, and [16] applied such changes in a study with Mexican college students.

Second modification: in our version, we employed 12 items only, according to the results found by [16].

The third and last modification consisted in applying the instrument via computers. The object was to faster and more accurately store data, avoiding previous codification stages [19].

UACH’s Social Sciences and Health Sciences freshman students were invited to participate in the study. Those who agreed to participate signed the corresponding informed consent letter. The aforementioned instrument was then answered via personal computer, using the 2.0 scale editor version of the questionnaire’s management module [19]. The schools’ computer labs were used in sessions of approximately 25 minutes. Each session opened with a brief introduction outlining the importance of the present study and a tutorial on how to access BIAS questionnaire. Instructions on how to answer the questions appeared on the first slides. They preceded the first item. At the end of each session, student participation was acknowledged.

Once the participants answered the questionnaire, data was gathered using the 2.0 scale editor version of the result generator [19].

The psychometric analysis was implemented in two phases: 1) confirmatory factorial analysis and 2) factorial invariance analysis. This implementation sought the best possible test to cast anxiety scores on body image as perceived by college students in the social sciences and health sciences fields.

To generate the confirmatory factorial analysis for each sample, AMOS 21 software [20] was used. Error term variances were specified as free parameters. Structural coefficients were established for each latent variable (factor) to match its scale to that of one of the superficial variables (items). The Maximum Likelihood Estimation method was used under B. Thompson’s [21] recommendation stating that whenever a confirmatory factorial analysis is implemented, not only is the theoretical model adjustment corroborated, but it is also recommended to compare the adjustment indexes of several alternative models to make a better choice.

In order to corroborate the factorial invariance of the Body Image Anxiety Scale (BIAS) among health sciences and social sciences college students, a series of multi-sample confirmatory factorial analyses were run through AMOS 21 software [20].

According to Table 1 results, the confirmatory factorial analysis of the 12 items set into two factor-groups in the health sciences sample is acceptable (GFI.900 and RMSEA.103). Moreover, considering the parsimony and incremental adjustment measures (Tables 2 and 3), it is significantly superior to the independent model and very similar to the saturated model.

Furthermore, the confirmatory factorial analysis in the social sciences sample also indicates that the two-factor measurement model is acceptable (GFI.899 and RMSEA.106). According to the parsimony and incremental adjustment measures (Tables 2 and 3), it is significantly superior to the independent model and very similar to the saturated model.

Figure 1 introduces the measurement model for the first confirmatory factorial analysis (health sciences students) for the 12 items grouped according to three factors, including standardized regression coefficients among items, factors, and standardized factorial saturations (commonalities) of each item 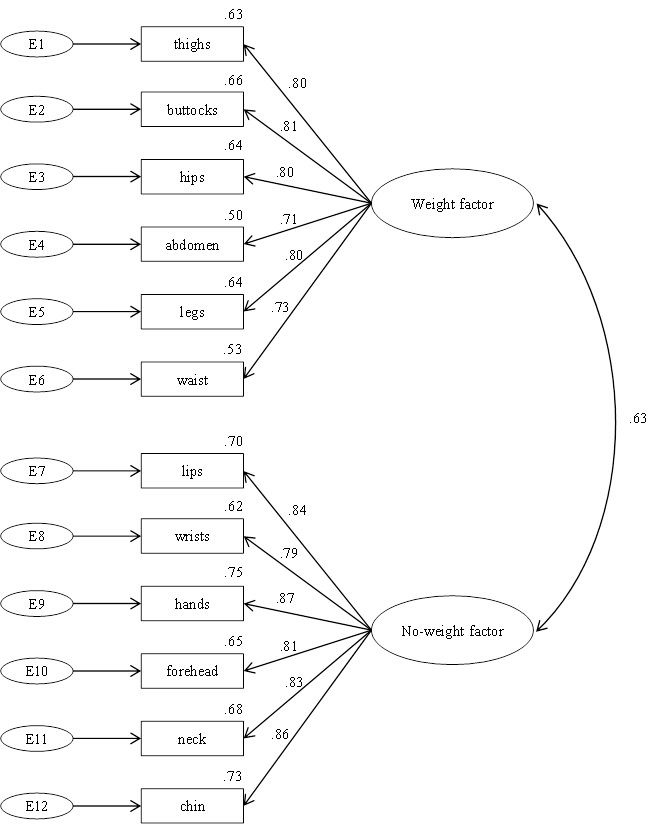 Figure 2 presents the measurement model for the second confirmatory factorial analysis (social sciences students) for the 12 items grouped within the two factors, including the standardized regression coefficients among items, factors, and standardized factorial saturations (commonalities) of each item. 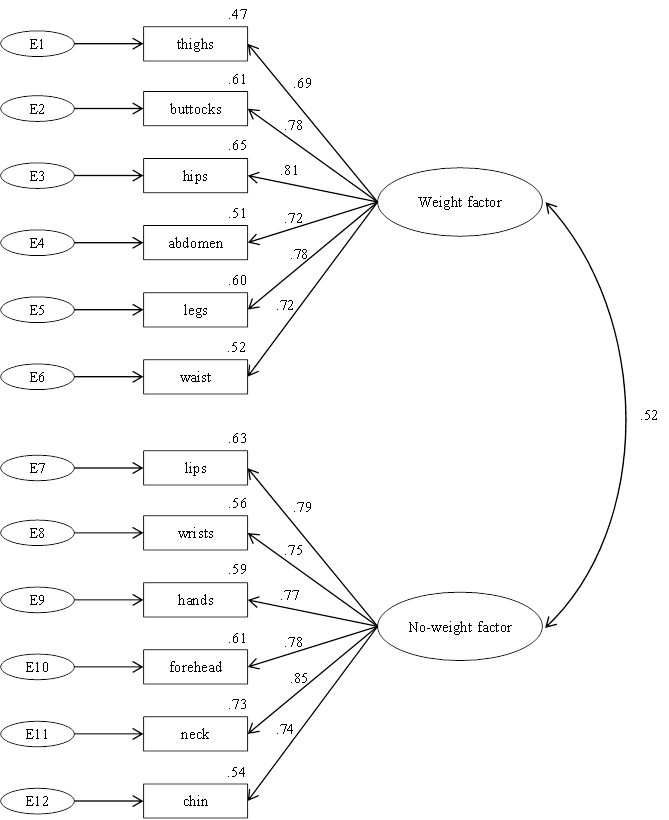 Abalo’s et al. [13] recommendations were followed to analyze the questionnaire’s factorial invariance considering the same model for both samples. Adjustment indexes (Table 4) validate the basic measurement models equivalence between both samples. Even though the Chi-square value exceeds the acceptable boundaries to take in the invariance hypothesis, the remaining indexes contradict this conclusion (GFI.899; CFI.925; RMSEA.074; AIC 851.157), which makes the invariance base model satisfactory (unbounded model).

Metric invariance was characterized by adding restrictions on the factorial loads to the base model. Values shown in Table 4 make the invariance level viable. The general adjustment index (GFI=.897) and the root mean square error of approximation (RMSEA=.071) provide converging information. Besides, the Akaike Information Criterion (AIC=852.082) and Bentler’s comparative index (CFI=.924) do not show important variations compared to the previous model. According to Cheung and Rensvold [24] sheltered models evaluation criterion, suggesting that if both sheltered models’ CFI difference decreases.01 or less, the restricted model is valid; hence so is the factorial invariance performance; the.001 CFIs difference obtained validates the metric invariance model. Therefore, we may conclude that the factorial loads are equivalent in both samples.

Once metric invariance was demonstrated in both samples, the intercepts (strong factorial invariance) equivalence was evaluated. Table 4 indexes show the model’s adjustment, both as independently tested and as analyzed according to its sheltering with the metric invariance model. The difference between Bentler’s comparative indexes is.001, the general adjustment index is.896, and the RMSEA is.071. Once the strong invariance was accepted, both tested models appear equivalent according to factorial and intercept coefficients.

Table 4. Adjusted goodness of fit indexes of each model analyzed from the factor invariance test.

Once factorial invariance was verified, the factors’ means differences for both samples were obtained taking the social sciences group as referent, setting the means value for that sample as 0, and freely setting the means value for the health sciences group. The regression and intercept coefficients restrictions required for means contrasts were automatically obtained via AMOS 21 software [20]. The means comparisons results indicated that the Weight Factor mean was significantly lower (-0.472, p <0.01) for the health sciences students.

The following conclusions were reached based on the analysis and discussion results, and taking into consideration that the main objective of the present study is to examine the factorial structure and the invariance measurement of such structure in social sciences and health sciences students:

1) The Confirmatory Factorial Analysis indicated that the data adjustment to the theoretical model of the 12 items grouped into two factors is acceptable. Moreover, both factors overtly present adequate standardized factorial saturations. Besides, factors correlate positively and in a statistically significant manner, which indicates that as perceived anxiety increases in one of the factors, so does it escalates in the other.

2) The factorial invariance analysis indicates a high level of congruency between factor pairs. Such congruency level suggests the existence of strong evidence for the measurement’s crossed validation, hence, the structure’s stability.

In brief, the analysis of psychometric properties has demonstrated the viability and appropriateness of a bifactorial structure, according to established psychometric requirements when informants are the students themselves. The structure of both factors, based on statistical and substantial criteria, has shown adequate adjustment, reliability, and validity indicators, which agrees with Ornelas’ et al. findings [16]. Nevertheless, we believe further research is necessary to corroborate or question the present study results.