Abstract: This study was carried out to identify the better function that fit the growth curve in broiler depending on some criteria [coefficient of determination (R2), Adjusted R2and  mean square error (MSE)]. Eighty day-old unsexed broiler chicks (Ross 308) were used in this study for the period from 6/4/2015 to 17/5/2015. The growth data of broiler through 6th weeks were subjected to three nonlinear functions (Weighted Least Square (WLS), Gompertz, and Logistic). Results revealed that the WLS function was the best for fitting the growth curve in the broiler as compared with the two functions. The estimated values of asymptotic weight (β0), the integration constant (β1) and maturity rate (β2) parameters according to WLS model were 2088, -3.68 and 0.14 respectively. In conclusion: The results confirmed that WLS function was more appropriate to describe the growth curve in the broiler (Ross 308) as compared with other functions.

The broiler industry requires birds with the ability to grow very fast and to produce a good quality carcass in the shortest time frame (Prince, 2002).

Growth can be defined as an increase in body size per time unit. It represents an important economic trait in broiler industry (Schulze et al., 2001). The diet of broiler consists different types of additives and the effect of additives could not limit to the final weight,but it may extend to include the shape of growth. When the growth curve varied, this will increase   their importance in recognizing the changes through the different stages of raising broiler. The growth curve was the main subject of many studies in domestic animals because the knowledge of the growth curve has practical applications and will lead to increasing the economic revenue of the project. (Sabbioni et al., 1999; Abbas et al., 2014).

The application of nonlinear equations on growth curve will provide a set of parameters that could be used to describe growth pattern over time. Furthermore, it will enable the breeders to expect the weight of animals at a specific age  and to detect the  stage that associated with  the reduction in growth rate  (Tzeng and Becker, 1981; Yakupoglu and Atil, 2001).

In bioeconomical studies, the using of mathematical growth model in combination with food consumption data is important because the cumulative food consumption up to slaughter is dependent not only on growth but also on the shape of the growth curves (Knitztova et al., 1992).

The objective of the present study is to identify the better  nonlinear function that could be used  to describe the growth curve of broiler under the conditions of Iraq.

The experiment was conducted in one of the private sector poultry farms in Baghdad for the period from 6/4/2015 to 17/5/2015 day-old unsexed broiler chicks (Ross 308), purchased from a local commercial hatchery. Birds were housed in a floor pen. The lighting regimen provided 22 h of continuous light per day. Birds were vaccinated against Newcastle disease and infectious bronchitis on the 10th day of age and against Gambaro disease on 17 days of age.

A commercial basal diet was given to the birds. The ingredient and the nutrient composition of the basal diet are presented in Table 1. Feed and drinking water were offered ad libitum. Birds were weighed at fixed intervals of one week for 6 weeks.

Table 1. Nutrient composition of the basal diet of  broiler (Ross 308).

The growth functions were carried out from the weekly body weight.

Three functions were used (Weighted Least Square (WLS), Gompertz, and Logistic) to identify the better function that describe the growth curve in the broiler. The functions and their mathematical notations are presented in Table (2). In all functions, β0 is the asymptotic (mature) weight parameter, β1 is the scaling parameter (constant of integration) and β2 is the instantaneous growth rate (per day) parameter (Yang et al. 2006).

Table 3. The criteria of Goodness of fit for functions.

n – the number of observations, k – the num­ber of parameters included in the function. 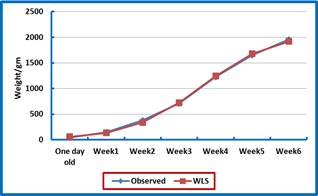 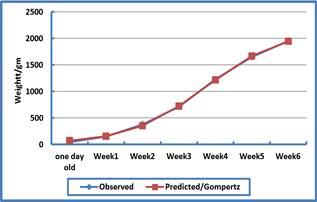 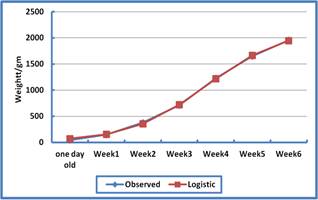 The correlations between the growth curve parameters were found negative for β0-β2 for all functions whereas the correlation was positive between β0-β1 and β1-β2 for Gompertz and Logistic. The results are in contrast for WLS function.

The results of goodness of fit for WLS, Gompertz and Logistic functions are presented in Table 6.

In all models, the value of the coefficient of determination was high for all three functions. Similar results obtained by Kuhi et al., (2003) who found that growth functions, the Lopez, the Richards, the France, the von Bertalanffy, the Gompertz and the logistic gave a suitable fit to the profiles. The comparison based on R2 values, R2 > 0.98 showed that it is difficult to identify  the  model which  is significantly better than the others to fit growth curve  based on this criterion. Tompić et al., (2011) found that the R2 values of the Gompertz, Richards and Logistic function were ranged from 0.988 to 0.995 in Ross 308 broiler.

The value of MSE of WLS function was the lowest 3.19, as compared with the values of   MSE for the Gompertz (1137.5 ) and Logistic ( 497.6). This result confirmed that WLS function was fit the growth curve better than other functions.

The results of the present study disagreed with the previous results reported by several researchers ( Gous et al., 1999; Santos et al., 2005) who confirmed that the Gompertz function is the best function for describing growth curve in broiler. On the other hand, some studies found that the Richards function gave the best fit for growth curve in broiler (Kuhi et al., 2003; Tompić et al., 2011; Moharrery and Mirzaei, 2014).

These differences among studies could be attributed to differences in the environment in which the broiler were reared. According to Yalcin et al., (1997) the continuous selection for increased growth rate may increase broiler sensitivity to hot climate. High environmental temperature decreases body protein growth for broilers and decreases the time required to reach the point of inflection for broiler (Hruby et al., 1996). Thus, broilers reared at higher temperatures reach the end of the asymptote sooner and at a lower growth rate. These differences could lead to disagreement about the better function that describes the growth curve in the different environments.

Due to the difference of breeds, environment conditions and other errors, obtaining a good comparison among different research results was difficult (Wang et al., 2004; Sun et al., 2006).

It is concluded that the description of the growth patterns using mathematical models allows an exact comparative analysis. Mathematical models of growth are useful to provide means for visualizing growth patterns over time. The equation can be used to predict the expected weight of a group of animals at a specific age.  The results of the present study confirmed that WLS function was more appropriate to describe the growth curve in the broiler (Ross 308) in a tropical climate as compared with other functions.