The element lead (Pb) is probably the most extensively studied of ˝heavy metals˝ contaminant, due to its ubiquitous occurrence in the environment and it's probably adverse neurological and health effects (Melgar et al., 1997). The major sources of lead resulting from human activities, such as sewage sludge, painting, paint industries, fuel incinerator, plumbing supplies, potential anthropogenic sources of air borne lead, source as mining, smelting, coal combustion, waste incineration and the use of Pb additives in fuel, exceed the contribution of natural sources on the global scale (Bellis et al., 2001). When the concentrations of lead metal exceed the normal limit, it become poisonous and may be fatal to humans and other organisms (Niebaer and Richardson, 1980). The organ lead compounds tetraethyl and tetramathyl. Lead can accumulate in some organs of fish such as liver and kidneys and cause lethal and a variety of sub lethal effects (Ozmen et al., 2006). Kock et al. (1996) showed that lead levels in Salvelinus alpinus liver and kidneys indicate higher uptake rates of both in summer when water temperature was higher. Bioaccumulation and magnification is capable of leading to toxic level of these metals in fish even when the exposure is low. The aim of the present study is to estimate the median lethal concentration of the lead metal in commercial fish Barbus sharpeyi and to detect clinical signs in such fish after exposure to lead metal such as movement, feeding, growth and mortality, as well as studying the histopathological changes in fish body organs (gill, kidney, liver, and spleen).

This study was conducted at the laboratory of fish diseases in the College of Veterinary Medicine, University of Baghdad for the period between 1/3 to 1/6/2013. A total of 300 fingerlings of Bunni fish (B. sharpeyi) ranging between 10-15g in body weight, with no visible signs of disease were used. Fish were brought from Al-Swerra hatchery and acclimated to laboratory condition for 15 days before beginning of the experiment. Fish were briefly bathed in NaCl for 5min to remove all external parasites if present.

Histopathological changes were studied in fish that exposed to lead acetate. After dissection, samples from gills, liver, kidney and spleen were collected per fish and fixed in 10% formalin for 24h, dehydrated in graded ethanol concentrations and embedded in paraffin wax. Sagittal sections (5μm of thickness) were cut and mounted on glass slides. Sections were deparaffinized in xylene, hydrated in ethanol, stained with hematoxylin – eosin (HE) and examined by light microscope (Luna, 1968).

Probit method was applied to estimate of LC50 for lead acetate of Barbus sharpeyi as shown in table (1). The present study determined the LC50 of lead acetate as 4.24mg/l, LC0 (1mg/l) and LC100 (7mg/l).In the acute toxicity test, approximately 1 h after exposure for the various lethal lead acetate concentrations, the fishes showed abnormal behaviors included increase movement, frequent jumping, erratic swimming, convulsion, and escape attempts from the aquarium, loss of equilibrium. Results showed no mortality of fishes in the control groups. The effect of acute toxicity of lead acetate concentrations on Barbus sharpeyi at different exposure period and the mortality percentages are shown in Fig. (1). 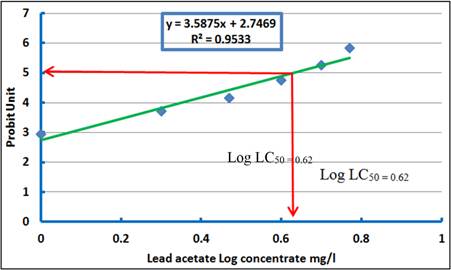 The present study determined the acute toxicity of lead acetate on B. sharpeyi during 48 h. The LC50 of lead acetate was 4.24mg/l. The concentrations of lead in the marine and freshwater environment have been considerably increased by human activities. The rate of introduction of lead into the water increased 27 fold since the pleistocene period (Tatsumoto and Patterson, 1963).

The exposure to heavy metals can affect reproduction efficiency of aquatic biota and can lead to a gradual distinction of their generations in polluted waters (Ebrahimi, 2004). Heavy metal contamination not only directly affects fish health, but it can also disrupt the normal steroidogenesis pattern in fish, lead to impaired hormone production in both male and female fish, and decrease the quality and quantity of sperm and ova production. (Enrique et al., (2002); Munoz et al., 2005).

The effect of the metal also depends on the species and size of the fish, salinity of water, water temperature, pH and exposure time. The better water temperature in the rearing aquarium ranged between 24-26°C. Temperature is an important factor, which regulates the biogeochemical activities in the aquatic environment such as fish (Boyd, 1990).

Loss of equilibrium follows erratic and darting swimming movements, which might be due to the inhibition of brain cytochrome C oxidase activity, causing cytotoxic hypoxia, thus causing brain damage to the region of the brain associated with the maintenance of equilibrium (Nsikak et al., 2007).

The rates at which the swimming behavior appeared, depends on the species of fish and sensitive to low Dissolved Oxygen levels. DO also regulate the availability of certain nutrients in water. Many physical and biological factors affect the amount of dissolved oxygen in river (El-Nemaki et al., 2008).

Salinity also reduces the solubility of oxygen (Karlesen et al., 2000; Al-Saffar, 2006), in addition to that biological process of photosynthesis and respiration also affect DO concentration in river. As aquatic plant photosynthesis, they give off large amount of DO during day light hours. However, respiration from aquatic vegetation, microorganisms, and algae consume oxygen at all hours of the day and night, the fluctuation occurs in the dissolved oxygen levels (Sivakumar and Karuppasam, 2008). 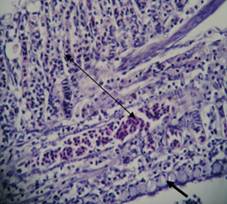 ) with sever hyperplasia of mucous cells in the secondary lamellar epithelia ( 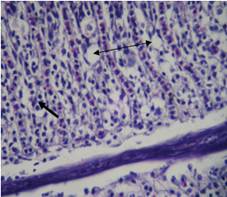 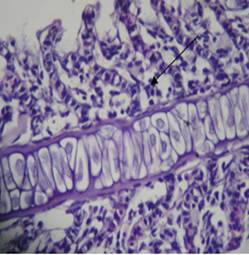 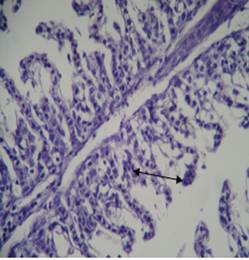 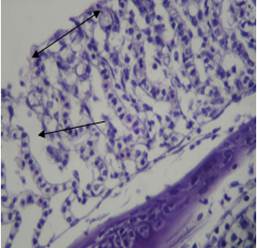 The specific structural lesions observed in the liver parenchyma exposed to T1 (0.42 mg/l) were massive destruction in liver parenchyma resulting in sever vacillation with necrosis of hepatocyte associated with nuclear pyknosis (Fig.12) also the results show sinusoidal dilation and congestion in other section with periductal MNCs infiltration (Fig. 13).

At T4 (0.21 mg/l), no clear pathological changes observed except bile duct dilation with MNCs infiltration (Fig.17). The hall mark of spleen tissue exposed to T1 (0.42 mg/l) characterized by severe destruction in both spleenic tissue with spleenic sinus congestion together with variable number of melanomacrophage in addition to lymphoid depletion in white pulp (Fig.18) at (T2) (0.42 mg/l), the main lesion characterized by melanomacrophage hyperplasia that appear as brown golding cluster (Fig.19) .

At T4 (0.21mg/l), the fish spleen no pathological lesion was observed except slight congestion of spleenic sinuses (Fig.22).

The gill histopathological finding in the present study is similar to the observation obtained by Triebskorn et al., (2008) that the basic gill pathology, hyperplasia, detected in the majority of studied fish, and mild to severe hyperplasia detected in almost every fish from the basin of the lower Amur River. Hyperplasia is regarded as a nonspecific defense reaction to heavy metals and mixed pollution and has been described in many reports.

Appearance of inflammatory cells in the gill tissue (moderate to marked) and all these alteration could represent a defense mechanism of the body to increase the distance across which waterborne pollutants must diffuse to reach the blood stream (Arellano et al., 1999). The liver histopathological finding in the present study similar finding were revealed in sleek Unicorn fish Naso hexcanthus exposed to heavy metal at contaminated site in the red sea areas (Montaser et al., 2010). The histological alterations of hepatocytes identified in this study may be the result of various biochemical lesions and act as a signal of degenerative processes that suggests metabolic damage (Pacheco and Santos, 2002). Alterations of kidney tissue during the acute exposure were severe. They were composed principally of tubule necrosis, glomerular alteration and lipid inclusion accumulation in epithelial cells. Following the chronic contamination, severe glomerular alteration was noted in this tissue. 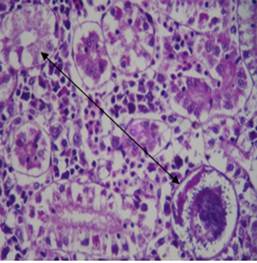 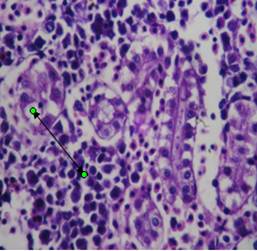 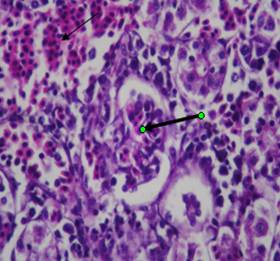 ) with cong. of glomerular tuft ( 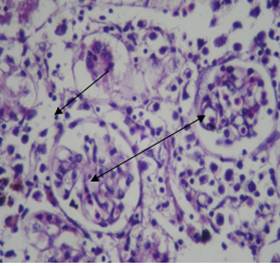 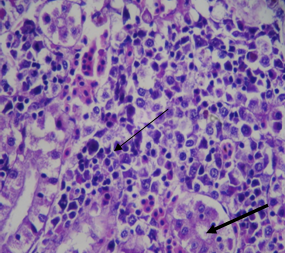 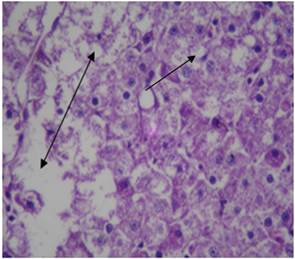 ) with necrosis of hepatocyte ( 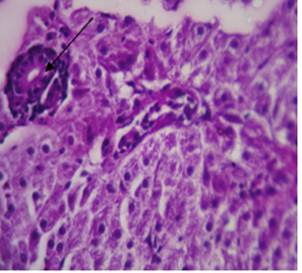 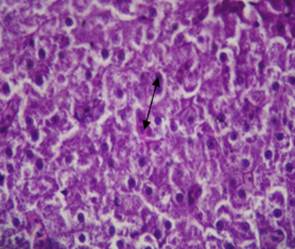 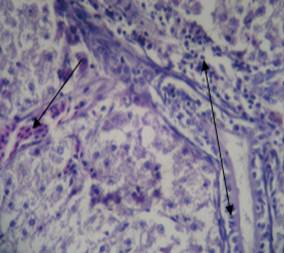 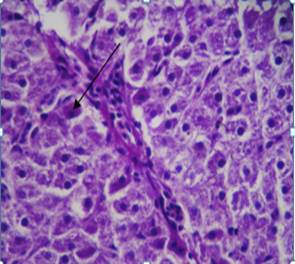 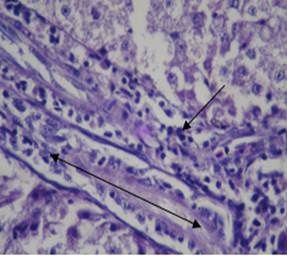 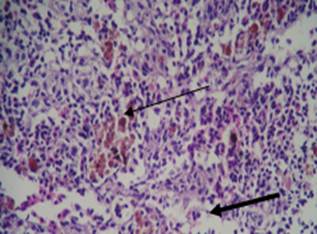 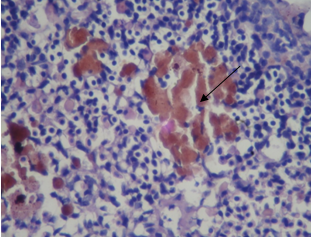 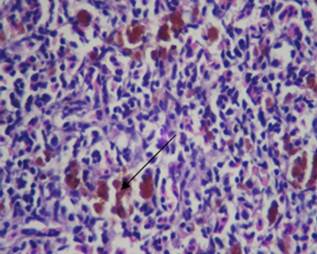 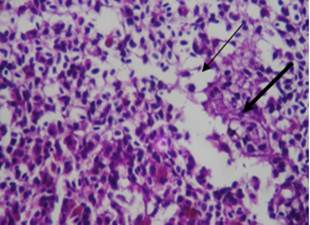 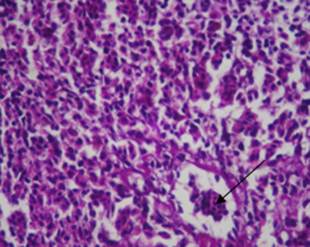