Abstract: The m-sequence is a type of pseudorandom sequence that has been studied intensively. However, its security is threatened due to its low linear complexity. Based on the state transition rules of the m-sequence, our research group has proposed a new sequence by changing its state transition order. This provides a large number of sequences with similar levels of pseudo-randomness and autocorrelation as the m-sequence. Additionally, its linear complexity is greatly improved.

Claude Elwood Shannon, the father of information theory, proved in his two theses that the "one-time pad" cryptosystem is theoretically completely safe [1]. However, there are limitations to this cryptosystem in practical applications. In contrast, a pseudorandom sequence-based stream cipher has additional advantages, such as easy realization, flexible length change and limited error transfer. Therefore, the pseudorandom sequence-based stream cipher has become the universal cryptosystem today. The m-sequence, which is generated by a linear feedback shift register, has the longest period with good autocorrelation, balance and running properties, and is widely used in security fields, such as spread spectrum communication and encryption. However, due to the wide application of the B-M algorithm, the structure of the linear shift register can be easily revealed through calculation. Moreover, due to its low linear complexity, the m-sequence is an easy target for attack. In applications, the m-sequence generally requires transformation to add nonlinearity, which requires additional hardware implementation complexity.

In mobile communications, the encryption algorithm used for uplink communication, when the GSM system is connecting from the mobile terminal to the base station, is the A5 sequence cryptographic algorithm, which was developed by French in 1989. The A5 algorithm consists of three linear feedback shift registers (LFSR), which each use independent clock control. The A5 algorithm is suitable for high-efficiency hardware implementations, and passes known statistical tests. Although it has been reported in 2000 and 2003 that the encryption key can be cracked under part known-plaintext, this crack requires a large number of advance calculations. Therefore, it is safe for general applications.

Mr. Gao Hongxun gave a Method and Proof of n Level M Sequence and its Feedback Function by subsequent state of state transition's [2]. Mr. Taejoo Chang calculated the number of conjugate states in pairs, but there was not further research work of him. There was not study on the new sequences formed by changing the state transition. Pro. Lv Hong gave the sequence by changing the number of

pair of cross-conjugate states named m sub-sequence. There described the properties of this sequence in [3,4,8,9,14]. In this paper, the characteristics of cryptography of the m sub-sequence like randomness and linear complexity are very good. It has strong ability to resist linear attacks.

The state transition rule of the largest linear feedback shift register at level n is determined by its feedback function. The first order of the m-sequence is generated when the state transforms from

; the next order of the m-sequence is generated when s1 transforms to

; and the transitions are then repeated as follows:

(as shown by the dotted line in Fig. 1) until a full circuit is completed and a circle is formed with the

period. At this stage, the transformation will output an m-sequence with a period of

. This circle is also called a state transition diagram, or a state diagram for short. In this state diagram, s0 is called the original state, and

is called the subsequent state of 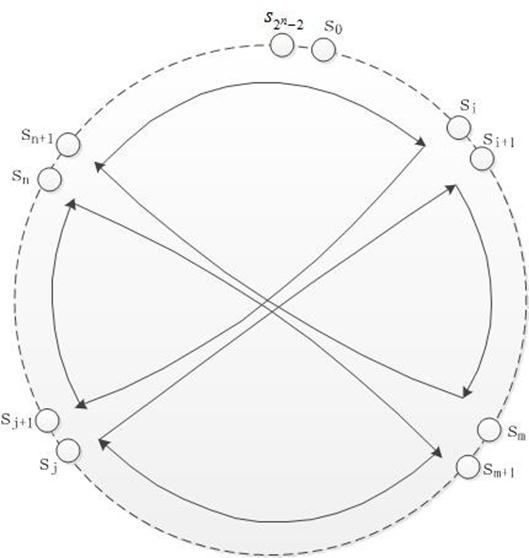 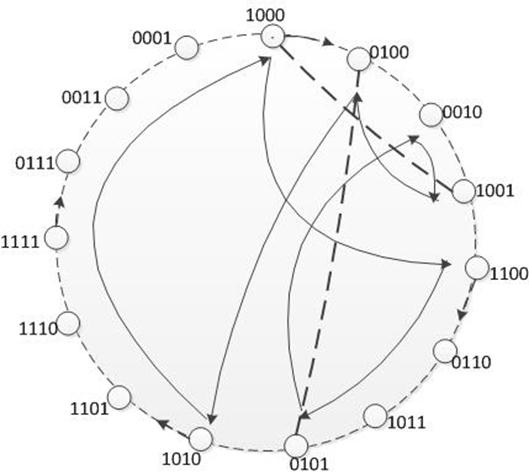 The dotted line in Fig. 1 represents the state transition of generating an m-sequence. In these state diagrams, there are state pairs with low orders, reciprocal orders and the same orders as other orders, such as, 0101 and 0100, 0100 and 0101, etc. As shown in Fig. 1, these state pairs are called conjugate states, represented by

. At the same time for the state transition, the first order is generated and a new sequence with period of

, and the output sequence of the linear shift register with an original state of 1000 is

The m-sequence has many conjugate states in the state transition diagram. It can be observed from the diagram that changing the subsequent state of the cross-conjugate states will form a new sequence with the same period. In the new sequence, the numbers of 0 and 1 are not changed. Different runs and their numbers are also not changed. By calculating the number and distribution of each run for a large number of new sequences, it can be found that the new sequence has the same balance and statistical properties as the m-sequence.

is the feedback polynomial and

of the m-sequence feedback polynomial

. The other state’s feedback remains the same, i.e., 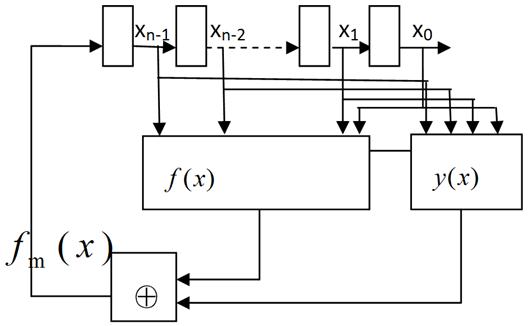 One n-level linear feedback shift register (LFSR) can only generate

translation non-equivalent m-sequences. During the state transition process for each m-sequence, the cross-conjugate state pair and change in the order of the state transition can be found, and thus multiple different sequences can be obtained. The number of cross-conjugate state pairs increases largely with the levels of shift registers, thus more new sequences can be generated. For an m-sequence with period

3.2.2. The Linear Complexity of the m-subsequence

The linear complexity of an n-level m sequence is relatively low. A 2n-bit cipher text can be obtained by an analyzer through solving a linear system of equations or adopting the B-M algorithm to find the characteristic polynomial of the m-sequence, which will also provide the structure of the shift register. Hence, although an m-sequence has the longest sequence period and good random statistical properties, it cannot be regarded as a key-stream sequence.

The m-subsequence is a nonlinear sequence that changes the output order of the m-sequence and thus changes its linearity, and therefore can enhance its security and make cryptanalysis more difficult. The B-M algorithm is adopted to calculate the complexity of new sequences. Table 2 shows that the linear complexity of an m-subsequence with the same level is higher than that of the m-sequence, with an exponential growth relationship.

Table 2. Complexities of the m-sequence and m-subsequence with the same level.

Linear complexity is a very important property for a key-stream’s pseudorandom sequence. The higher the complexity is, the stronger the anti-attack ability will be. Under conditions where new hardware is added, after the m-subsequence reconstructs the m-sequence, it will then generate a new nonlinear sequence. Thus, the linear complexity has been greatly improved, and the statistical properties have also been maintained, and thus this method can be applied to key streams. 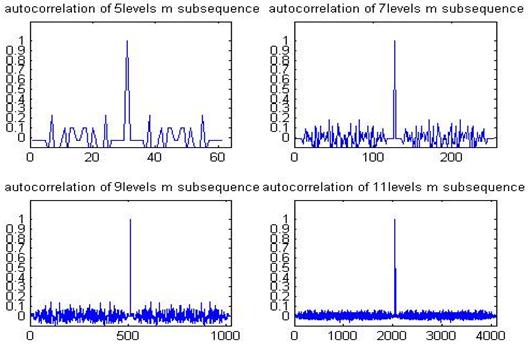 4. Application of m-subsequence in Cryptography

During the signal encryption process of mobile communication, a simple but efficient method is required to enable real time encryption rapidly, requiring hardware of low complexity that can be realized easily. The A5 algorithm applied in traditional GSM encryption applications which works perfectly. The m-subsequence is a simple improvement at the same level as the m-sequence, which does not change the randomness but greatly improves complexity and provides more available sequences. The research team is also working on other properties of m-subsequence, and it is believed that the m-sub sequence can be widely used in the communication field.