Abstract: The aim of this paper was to predict the thermal conductivity of local composite materials, particularly used as building materials in Sub-Saharan countries, as a function of their water content. In this work, a new simplified model, based on a physical approach with assumption of an ideal shrinkage of the material during the evaporation of water, was built. Two composite materials were successfully tested providing good fitting and prediction results. Calculated and experimental values of thermal conductivity were in good agreement, with a maximum standard error of 0.037 Wm-1K-1 for the three hygroscopic materials. In spite of its simplicity, this model leads to a more accurate representation than other classical models of the measured variations of the thermal conductivity of hygroscopic materials with the water content.

The local composite materials were used since the fifties, because of their low cost, initially to bring an economic and social response to the production of a habitat intended for the most stripped populations. Today, these building materials interest as well the poor countries as the industrialized countries. The process is traditionally used in several Sub-Saharan countries, particularly in Cameroon where compressed soil building blocks or insulating material mixed with a building material were very used as building materials.

Since the local composite materials in particular are used for building and are exposed to very different meteorological conditions, it is very important to know how their thermal conductivity vary with the water content. To be able to predict their thermal behaviour in various meteorological conditions, the aim of this study was to develop a simplified model enabling the calculation of the thermal conductivity as a function of the water content X and to valid it experimentally for some local composite materials.

Generally, a homogeneous composite material is composed of a solid phase (d), of water (w) and of air (a). By considering m as mass and V as volume, its composition is defined by the following parameters:

• Global porosity of the material:

Thereafter, for isotropic mixtures, Hashin and Shtrikman [10] shown that the effective thermal conductivity is independent of pore structure and a refined analysis lead to the Hashin–Shtrikman’s bound adapted by Tong et al. [11] to a three phase mixture as:

In the literature, several authors proposed models, as a function of the parallel configuration and of the series configuration, to estimate the effective thermal conductivity of a composite material. Among these authors, we can notice:

where A is a constant depending on material.

But among these models, the model of Ingersoll [15] and that of Bal et al. [8] were the more physical models.

This author considered that, water in a parallel arrangement with air is in series with the solid structure:

is the conductivity of air and water corresponding to a parallel arrangement, F and

have been previously measured. Moreover the unknown parameters

of the model must be identified.

With this model we have the fine comprehension of the elementary mechanisms. However, its use is not always suitable, in particular in the case of an application with for goal the taking into account of thermal conductivity in the energy saving in the building in unfavourable period. Moreover, to consider porosity as a parameter supposes that the material does not undergo shrinkage during decreasing of its water content.

The most physical models suggested in the literature were not explicitly a function of the water content. To elaborate on the proposed models, we considered that the material was constituted of a solid structure with density

, pores of which are occupied by water liquid with density

then humid air with density

Furthermore, by considering m as the hygroscopic material mass at a given time, mw its water liquid mass, mv its water vapour mass, ma its humid air mass, mas its drying air mass and md its solid structure mass, it can be written that:

x: mass fraction of the humid air in the fluid phase.

We supposed water liquid, in a series arrangement with humid air, was in parallel with the solid structure. Thus, by considering the equivalent represented in figure 1, the equivalent thermal resistance R of the material is:

Figure 1. Model of the elementary volume of the material.

Using relations (19) to (21), the equivalent thermal conductivity of the material is:

In other respects, water liquid was in a series arrangement with humid air so that:

Finally, thermal conductivity of material can be obtained using these two equations:

For this complete model, the unknown parameters that must be identified are thus:

, α, β and 𝛾. Out of four parameters to be identified, the model presents two variables X and x to determine from the independent experiments. This leads us to elaborate a simplified model by using some assumptions.

We assumed that vaporization front view was at the border of material. Therefore, we have an ideal shrinkage of the material during the evacuation of water. Thus, the pores were only occupied by liquid water and in this case:

Finally, only water liquid was in parallel with the solid structure. We obtained so:

For this simplified model, the unknown parameters that must be identified are thus

and the values calculated with equation (29):

where n is the number of measurements for contents.

Fit and prediction quality were analysed by the regression coefficient (R2), the mean relative deviation (MRD) and the standard error (SE), calculated as follow:

; n being the number of experiments.

The sensitivity of the simplified model parameters

These two formulas represent the variation of the estimated value of

induced by a relative variation of k% of respectively the parameters

from their nominal values.

are obtained by Talla [16] for compressed soil building blocks, Bal et al. [8] for laterite based bricks with 0.0611 kgmi.kgla-1 millet waste and Nadeau and Puiggali [17] for wood of oak the thermal. Figure 2 represents the experimental values of the thermal conductivity obtained for these three materials for different values of the water content (between 0 and 0.139 kgw.kgdb-1, 0 and 0.054 kgw.kgdb-1, 0.025 and 1.068 kgw.kgdb-1 respectively).

of proposal model were determinate, for these three materials, by minimization of the sum of the quadratic differences (equation (30)) between the theoretical value of thermal conductivity

. Table 1 shows the parameters of this model fitted to the experimental thermal conductivities data of materials tested. In the same table, we have the values of the regression coefficient (R2), the mean relative deviation (MRD) and the standard error (SE) resulting from equations (31) to (33).

Table 1. Estimated parameters of the new model for the thermal conductivity of compressed soil building blocks and comparison with experimental data.

The mean relative deviation between the experimental values and the theoretical values calculated with relation (32) was 1.01%, 3.61% and 4.78% respectively for compressed soil building blocks, laterite based bricks with 0.0611 kgmi.kgla-1 millet waste and wood of oak. Moreover, the regression coefficient (R2) is 0.998, 0.985 and 0.979 in the order of materials tested. The results obtained, by using the elaborate model, are very satisfying for the two isotropic materials (compressed soil building blocks and laterite based bricks with 0.0611 kgmi.kgla-1 millet waste) but less for orthotropic material (wood of oak). All the experimental and theoretical values are represented on figure 3.

are greater than 100 Wm-1K-1. These values have not any physical meaning.

(c) wood of oak, experimental values from Nadeau and Puiggali [17]

Tables 1 and 2 show that the mean relative deviation of 3.6% resulting from the elaborate simplified model (3.6%) is smaller than the deviation of 4.0% given by the model of Bal et al. [8]. Moreover, the thermal conductivity of the solid fraction

Wm-1K-1 resulting of the developed model corresponds to true-to-life description; the experimental value of the solid fraction obtained by Bal et al. [8] was

Wm-1K-1. The value resulting from the model of these authors (

Wm-1K-1) deviates relatively from the experimental value. The porosity taken as a constant in their model, when the material would undergo a shrinkage by losing water, could be a justification of this difference.

In other respects, the knowledge of the second parameter

of developed model informs us about the density of the solid fraction. If 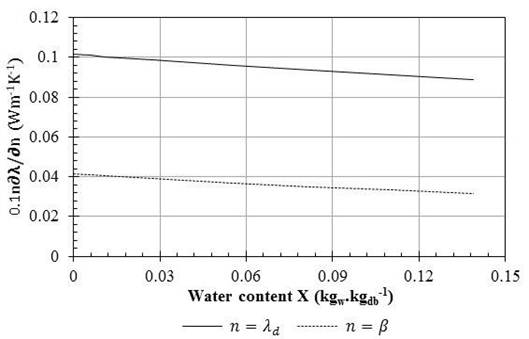 induced by a relative variation of 10% of each parameter for compressed soil building blocks.

indices by a relative variation of k% of respectively the parameters

from their nominal values. For example, Fig. 4 represents this sensitivity for compressed soil building blocks. It shows that the simplified model is less sensitive to parameter

: a relative variation of 10% on the parameter

has an effect 2.45 times more significant than on the parameter

. At last, we note that the two curves of sensitivity decrease when the water content increases.

In this work, an adapted simplified model has been developed to predict the thermal conductivity