Abstract: Common bean (Phaseolus vulgaris L.) is an important crop in the daily diet of more than 300 million people worldwide. Despite its importance, bean productivity is declining in western Kenya due to diseases and use of low yielding susceptible varieties. Among the diseases, ALS is a major biotic constraint of bean production in western Kenya. It causes an estimated yield loss of about 80% in the farmers’ field when severe. There is still limited information on pathogen distribution in western Kenya hindering breeding for ALS resistance. Therefore, a study was conducted to determine the occurrence of ALS disease in bean growing areas of western Kenya. A disease survey was carried out during the long and short rains seasons of 2013 in six agro-ecological zones namely: Low midland zone 1 (LM1) (Rongo and Bumula), low midland zone 2 (LM2) (Busia, Bungoma and Rangwe), low midland zone 3 (LM3) (Siaya and Teso north), low midland zone 4 (LM4) (Bondo), lower highlands (LH1) (Nandi Central) and upper midland zone 1 (UM1) (Sabatia and Nandi south). UM1 recorded the highest disease incidence and severity, whereas LM4 registered the least. Similarly, there was a significant positive correlation between disease incidence and severity (r = 0.711; p<0.0001). The study found the incidence and severity levels of ALS in western Kenya as high as 100% and 3 respectively. Therefore, farmers should be encouraged to use certified seeds to minimise the severity of the disease.

Common bean is the most widely grown pulse, second only to maize as a food crop and a major source of food security in East Africa [1]. In Kenya, the crop is ranked the second most important staple diet after maize [2]. Per capita consumption of beans varies from country to country and region to region, within a country. However, there is often a higher consumption of bean among low income families both in rural and urban areas [3]. In Kenya, per capita consumption is estimated at 14 kg per year, but can be as high as 66 kg per year in western Kenya [4], [5].

Bean yields Kenya have remained low on-farm with an average yield of 585 kg/ha compared to Ethiopia and Rwanda with yields of 1588 kg/ha and 913 kg/ha respectively [6]. Empirical evidence shows that poverty levels would have been 0.4 and 0.1% higher in Rwanda and Uganda, respectively, in the absence of the development and adoption of improved bean varieties. With regard to food security, it was found that, in the absence of bean varietal improvement, food security would have been substantially lower in both countries [7]. The low bean yield in the region is attributed to a number of factors, among them diseases and use of low yielding disease susceptible varieties [8], [9]. Among the diseases, ALS caused by (Phaeoisariopsis griseola) is a major biotic constraint of bean production in western Kenya. When weather conditions are favourable for its development, ALS can be very destructive with crop losses resulting mainly from premature defoliation [10]. In addition to seed, water and air currents play an important role in dissemination of P. griseola [11]. As much as 50% to 80% reductions in yields of some popular commercial bean varieties due to ALS have been reported in some countries [12], [13].

A survey conducted to determine prevalence, incidence and severity of angular leaf spot revealed that the disease is widely distributed in Kenya. The disease was prevalent in all the five districts surveyed i.e. Kakamega, Kiambu, Embu, Machakos and Taita Taveta and disease incidence, and severity were generally high [14]. However, the case in western Kenya is not known. In addition, there is limited information on pathogen distribution in western Kenya hindering breeding for ALS resistance. Thus, a disease survey was necessary for mapping of ALS hotspots areas and non-hotspots areas in the region as the process of designing an effective ALS breeding program requires precise and accurate knowledge on spatial and temporal distribution of ALS [13].

The study was carried out during the long rains (March to June) and short rains season (October to December) of 2013 in six agro ecological zones (AEZs) [15] namely: Low midland zone 1 (LM1), Rongo and Bumula, low midland zone 2 (LM2), Busia, Bungoma and Rangwe, low midland zone 3 (LM3), Siaya and Teso North, low midland zone 4 (LM4), Bondo, lower highlands (LH1), Nandi Central and upper midland zone 1 (UM1), Sabatia and Nandi south (Table 1) where beans are popularly grown in western Kenya. A total of 334 households were covered in the study. The number of households per AEZs was based on population sampling as described by [16].

Table 1. Characteristics of the AEZs covered and the number of households surveyed.

Both purposive and simple random sampling methods were used to select the bean farms and sampling sites. Sampling was done during the long rains season (March to June) and short rains season (October to December) of 2013. The sampling sites within AEZs were bean fields both in pure stand and intercropped. Sampling points within a bean field were randomly selected and disease incidence was determined in each sampling point at an area of 10 m². Disease incidence was determined as the number bean plants infected (showing ALS symptoms) over the total number of bean plants within the 10m2 area multiplied by 100.

Scoring was based on a rating scale of [17] where: low incidence = 1-20%; moderate incidence = 21-49% and high incidence = 50-100%. While disease severity was estimated as the proportion of the infected plant area by ALS disease within an area of 10 m². It was assessed on a 0 – 3 scale where 0 = No disease; 1 = Mild; 2 = Moderate and 3 = Severe. The same procedure was repeated for three more sampling points within the field.

A survey disease score sheet was used to determine the incidence of ALS on beans grown on the farms surveyed. Growing bean varieties were examined and scored for incidence by counting the number bean plants infected (showing ALS symptoms) over the total number of bean plants within the 10m2 area multiplied by 100 as already described above. The percentages so obtained were recorded and used to determine the incidences on different bean varieties.

2.4. Determination of Bean Varieties Grown by the Farmers and Source of Seed

A score sheet was used record the bean varieties grown on individual farmer's fields and source of seed used by the farmers for planting. The farmers sampled were all able to identify the varieties there were growing by showing the remnants of seed samples. The samples were collected and taken to KALRO-Kakamega for confirmation by the bean breeder.

3.1. Occurrence and Severity of ALS in Bean Growing Areas of Western Kenya

The survey results of occurrence as depicted by the incidence and severity of ALS in bean growing areas of western Kenya are presented in Fig. 1 below. ALS disease of beans was reported to occur in all AEZs surveyed in both long and short rain seasons. The incidence of ALS across the AEZs ranging from high altitude (LH1) to lower altitude (LM4) followed a normal distribution in the two bean growing seasons. The highest diseases incidences were reported in medium altitude (UM1, LM1, LM2 and LM3) in both seasons. Generally, there was high disease incidence in short rains compared to long rains. 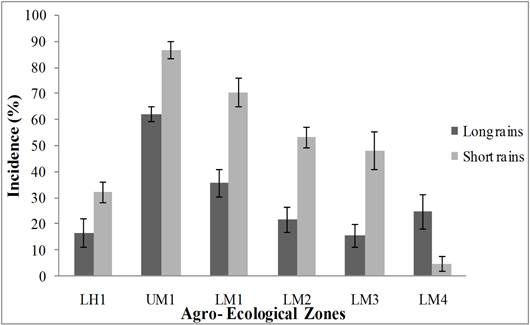 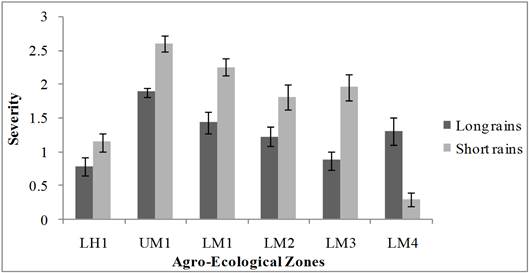 3.3. Bean Varieties Grown by the Farmers and Source of Seed

3.4. Sources of Bean Seed for Planting

Most farmers obtained their seeds from local markets (48.3%) and own seed sourced or recycled (39.7%); whereas the agro dealer and neighbour sources were the least sources of seed (below 5%) (Fig. 4).

The high incidence and severity of ALS disease of beans reported in medium altitude zone of the surveyed areas is attributed to moderate temperature range (20-25°C) and high relative humidity (70-100%) that provides favourable conditions for the successful infection of the host and sporulation of the pathogen, a characteristic of medium altitude areas ranges of 1500-1700 m.a.s.l [13]. This is in line with the findings of [18] who reported high ALS disease incidence and severity in Kakamega (UM1) and parts of eastern (LM3) of Kenya. While the low incidence and severity in LH1 could be due to low average temperatures (below 20°C) associated with such altitudes which as a results delays disease development [19]. In lower midlands (LM3 and LM4) however, the disease incidences that were low could be attributed to high temperatures (above 25°C), low rainfall and low humidity which are unfavourable for successful infection of the host and sporulation of the pathogen. This finding concurs with [20] who also observed a systematic disease decrease as temperature increases.

The high disease incidence and severity in short rains season as compared to long rains season could be attributed to the farming practices adopted by the farmers in the region. Beans are a major food crop and small-scale farmers are reluctant to decrease the frequency of sowing beans on a small piece of land [9]. This makes it difficult to culturally control ALS by season differentiation. The gap between the long rains cropping season and the short rain season is short and sometimes results in relay growing that encourages a build up of ALS through recycling of bean plant debris that becomes a major source of inoculum to ALS. Furthermore, [21] reported that ALS increased dramatically in Colombia when four bean crops were planted per year in Cauca valley. Even when planted twice yearly, the disease was especially serious where beans were planted in or near fields cultivated with beans during the previous one or more seasons [21].

There was no clear trend on the incidence and severity of ALS noted on beans varieties grown by the farmers in the study since none of the varieties grown by the farmers was bred for ALS resistance [22]. A large number of varieties were grown by the farmers and the large seeded rocecoco types were predominant on the farmers’ fields. The farmers did not however link this to the ALS tolerance. The earlier released bean varieties GLP 2 and GLP 585 seemed predominant across the AEZs. This is due to the fact that these varieties have been in commercial production for over 2 decades [22]. Varieties KK8 and KK15 that were predominant in medium altitude are recently released varieties that were tested extensively in medium altitude by KALRO Kakamega in recent years [23]. Variety KATX56 that was reported in lower midland (LM1 and LM 2) is a dryland variety developed and tested by KALRO Katumani in this region [23]. It was also noted in the study that the local cultivars Punda and Zaire were predominantly grown in lower midland (LM2 and LM3). This could be attributed to the fact that the breeding program of KALRO Kakamega has developed very few varieties for this region which previously was under dryland breeding program.

Since almost all the seed planted by the farmers was from open market and recycled farmers own seed, explains high disease incidence and severity reported in the study across the AEZs and seasons. Infected seed has been reported as one of the main sources of infection that often results in inoculum build up that causes severe disease occurrences [21].

In conclusion, it was found out that, there is high incidence and severity of ALS disease of common beans in medium altitude zones of the areas surveyed. High disease incidence and severity was noted in short rains season as compared to long rains season. In addition, it was noted a large number of varieties grown by the farmers were the large seeded rocecoco types and the seeds planted by the farmers were from open market and recycled farmers own seed.

Based upon the findings and conclusions of this study, it is recommended that the areas with low disease incidence and severity (LM4) should be used for bean seed production. Moreover, the farmers should be encouraged to use certified seeds to minimise the severity of the disease.

The author (s) would like to thank the National Commission for Science and Technology and Innovation (NACOSTI/RCD/ST&I,5th CALL M.Sc/016) and CIAT for financial support during the study. Above all, the Almighty God for the gift of life.