Abstract: Present paper aims to optimize the order batching problem expressed in mathematical language. There, the design and solving steps of order batching problem are based on genetic algorithm. The genetic algorithm in solving process variation method is used to realize the optimization of the model in order to enhance the efficiency of batch picking which increases customer’s satisfaction. Our result explored herein lies that the single order picking equipment limited factor has been extended to multiple sorting equipment in distribution center selection process.

The order picking system of multiple batches and small quantities has received considerable attention of researchers in scenario of rapid growth of e-commerce and the global economy. The artificial picking system occupies a larger proportion in a variety of ways. The optimization of the artificial person picking system has a vital role to enhance the efficiency of batch picking from which customer satisfaction is increased. Optimization and effectiveness of any model in various fields of mathematical and statistical sciences, agricultural and life sciences have received considerable role in research community. Since past few decades, much more noteworthy researchers have confined their attention in this connection. For more details, we refer Gibson and Sharp [1], Le-Due and De Koste [2], Maurya and Garg [3], and Maurya et al. [4,5,6,7,8]. Recently Maurya et al. [5] confined to explore mathematical modeling and optimization of memorization process to enhance learning using differential equations approach. Here, our keen interest is to design realistic batch picking route problem optimization model using genetic algorithm. The order batching problem expressed in mathematical language is the order needs to be chosen by the right way to carry on the batch. Usually, the model has two objectives to reduce the walking distance or walking time in the selection process. For more details, we refer Gibson and Sharp [1], and Le-Due and De Koste [2]. Both of the chosen walking time and walking distance have linear correlation relationship. However, chosen walking distance directly determines the walking time in the selection process. This paper is based on the shortest distance as the objective function of the order batching model which propose genetic algorithm of order batching problem. The key reason for application of genetic algorithm is a batch order which has been proved to be NP problem, through accurate calculation method is difficult to obtain the optimal solution of the problem, And the common optimization algorithm has limitations in the optimization of efficiency, it is difficult to be accepted within the scope of the time to find the optimal solutions to the problem, Therefore, Tho Le-Duc [11] proposed that it is necessary through an intelligent algorithm to solve the target. Distribution center is studied in this paper by artificial picking. Distribution center is labor-intensive. Each picker is picking by operating equipment. There is a number of turnover box on each picking equipment and for each turnover box, there is only one order product. So you can avoid a second sorting process. Picker will directly put turnover box in the export warehouse after he has been completed pick.

2.1. Assumptions of the Model

In view of Gilson and Sharp [1] we make some basic assumptions before mathematical modeling for the convenience of analysis and calculation. A set of our assumptions are as following:

(ii) Number of picking person or picking device for at least one. In previous study, picking people or picking device is set on the amount of a single, in actual operation, there can be multiple selected devices in select situations at the same time, therefore, in our present study, the selected devices are not doing quantity requirements, and that will be more in line with the actual circumstances.

(iv) Each order contains at least one kind of product.

(vi) The picking orders of each batch are picked by N pickers or picking device at the same time, picking up a batch after batch of the next election.

(x) There is no out of stock and emergency insertion order status.

(xii) The walking paths in the selection process are improved s-type strategies.

The layout structure is shown in Figure 1. 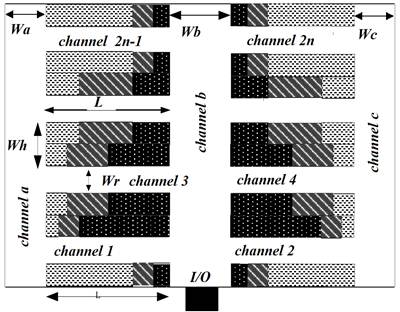 2.2. Mathematical Formulation of the Model

The mathematical formulation of the proposed order picking model is of the minimization type of objective function as following:

is on behalf of total number of orders.

is on behalf of the number of picker or picking equipment.

is on behalf of orders.

is on behalf of the weight of goods in the order n of the batch k.

is on behalf of the volume of goods in the order n of the batch k.

is on behalf of the first k picking batch.

is the number of batches

is the total number of paths

is the total distance walked according to the chosen path

is the decision variables to decide whether the goods y is immediately chose after sorting equipment finished goods x in the first k batch picking.

is the decision variables to decide whether the order list n in the picking batches k.

is the decision variables to decide whether the order list n in the picking path j.

is the number of goods a and goods b.

is the types of goods.

3. Design of the Genetic Algorithms

Due to the large number of orders, in order to be able to express the solution of the problem by chromosome intuitively, the paper based on the floating-point encoding method. The encoding can be expressed as:

By encoding operating to all orders in the order collection

In order batching process, always regard no more than picking equipment selection ability as constraints in batching, and the limit will join in the process of programming. We are not repeating them back.

In the design of the parameters chro, if the population is too small, the genetic algorithm is likely to converge to the local optimal solution, not to converge to the optimal solution. The main reason is that population size is too small, will lead to a decrease in the diversity of the population, leading to meaningful searches and the most advantage is lost. On the contrary, if the size of the population is set too large, the calculation needed in each iteration process will become very large, result in the slow, which will affect the practical application value of the algorithm. In this paper, we use the classic genetic algorithm to solve the problem. According to studies conducted by previous scholars, in this paper, chro=20-30, the size of the population to choose the interval values are acceptable.

is the original fitness function f (x) an upper bound, if

belongs to an unknown quantity, can be through the current population of the maximum fitness value as the upper bound of chromosome.

Selecting operation does not produce new chromosomes, Just selecting excellent individuals from the parent generation chromosomes, In order to achieve optimum operation, chromosomal crossover operation must be carried out, Only in this way can produce new excellent individual to implement genetic algorithm optimization process. Through the selection and crossover operator, GA can result in higher average fitness of children group, which is in the optimal direction to evolve. Crossover is the main means of genetic algorithm for optimizing search, by crossover operation to produce the new individual, it greatly accelerate the speed of the search in the process of group evolution.

Where N is the population size, in this paper, in the process of cross the crossover method used for single point crossover, the specific method is: for each chromosome, randomly generated a floating point number

. If r<p then the chromosome is selected, repeated selection operation N times, and then all of the selected chromosomes were randomly paired. In chromosome randomly set a new crossing point to crossover after randomly paired, when it crosses, the two chromosomes before or after the point swap part structure. All the finished, forming new groups, such as:

An important parameter of mutation operation is the mutation probability.

is the mutation probability

N is the population size

L is the chromosome length.