Abstract: Foaming and bulking in secondary mixed liquor particularly in activated sludge waste water treatment plants is a growing problem. The efficiency of secondary waste water treatment is critically dependent on the separation of the supernatant liquids from the sludge. Bulking and foaming primarily make it very difficult or impossible to achieve effective separation, thus reducing the treatment efficiency. The study is part of an ongoing effort by practitioners to understand and quantify the extent of the problems of foaming and bulking. The study presents a survey of some waste water plants in the northwest United States, and the results of statistical analysis in search of linkages between operating characteristics and settling problems.

Activated sludge systems are widely used in biological treatment of wastewater worldwide. Under the National Pollution Discharge Elimination System (NPDES) of the Clean Water Act, [1], wastewater treatment plants were required to reduce effluent levels of biochemical oxygen demand (BOD) and suspended solids (SS) below 30 mg/L, the so-called the "30-30" rule. When properly designed and operated, the activated sludge system of secondary wastewater treatment allows the attainment of the so-called "30-30" rule. Although several variations of the system are in use, the basics are; aeration of the wastewater followed by settling to separate the solids created by biological growth from the clean water. The efficiency of the system is critically dependent on the separation of liquids from solids. With the proliferation of the activated systems world-wide solids separation problems increased in wastewater treatment plants. All indications are that it is a growing problem as reported by several sources, e.g. [2]. Common settling problems associated with solid-liquid separation include excessive growth of algae and bacteria and bulking of solids in the bioreactor preceding settling. Other reported problems are excessive foaming resulting in difficult to manage solids and other nuisances.

In a critical review of bulking in activated sludge plants, [3], noted that despite extensive work in bulking and associated problems in the past two decades, they occur worldwide with no comprehensive solution in sight. Collectively, the settling problems result in significant reduction in the efficiency of BOD and suspended solids removal in secondary treated wastewater.

The purpose of this paper is to present a survey of treatment plants in the Pacific Northwest States of Washington, Oregon and Idaho. The survey measures the extent of the problem, and ways practioners have successfully controlled problems associated with bulking and foaming. Although others e.g., Jenkins and Richard [4], Jenkins et al. [5], identified six variations of settling problems associated with the activated sludge processes as; dispersed growth, non-filamentous bulking, pin flocs, filamentous bulking, blanket rising, and foaming. Settling problems associated with activated sludge systems are identified as either bulking or foaming.

Beginning in the early eighties, many investigators made concerted efforts on understanding and treating bulking, and foaming in activated sludge systems. One of the earliest surveys in the literature was conducted by Blackbeard et al. [6] for activated sludge plants in the Republic of South Africa. Their survey concluded that bulking and foaming were quite widespread and severe in South African plants. They identified several groups of filamentous organisms responsible for bulking and foaming. Madoni et al. [7] surveyed one hundred and sixty seven plants in Italy. Eighty four had foaming problems, eighty one with bulking problems, and fifty five were affected by both. The survey results indicated that the use of contact zone technique and/or addition of chemicals such as oxidants and coagulants were promising approaches to control.

Elliott [8] in a pulp and paper publication surveyed sludge bulking in several Canadian pulp and paper mills. He concluded that septicity, low dissolved oxygen, food to micro-organism ratio (F/M ratio), nutrient availability, and the presence of oil were causes of bulking in the majority of the plants surveyed. The survey indicated that many of the plants experienced more than one settling issue and found no link between prevalence of bulking and mill type. It also indicated that about fifty percent of the mills used hypochlorite for temporary control of settling problems. Seviour et al. ([9] surveyed activated sludge plants in Australia and examined foaming in mixed liquor. They concluded that there was weak relationship between filamentous community composition and plant operating parameters, and that Norcadia species were dominant organisms in foams. Blackall et al. [10] reported that only eight percent of the forty six surveyed plants had no foaming problems, and most of those were under loaded. The study concluded that foaming was dependent on plant operation parameters such as sludge age and mixed liquor, rather than plant design. Furthermore, the survey identified several Norcadia species present in foams.

In a survey of eight activated sludge plants in the Czech Republic with advanced nutrients removal, Krhutková et al. [11] found a relationship between foaming and sludge settling problems. Wanner et al. [12] surveyed national plants in the Czech Republic and concluded that the problem was widespread, and also isolated M. parcivella as the dominant filamentous organism in mixed liquor of plant experiencing settling problems. They concluded that the effect of filamentous organisms in sludge separation may be overestimated. As the preceding literature survey shows, the causes of settling problems are varied and not well understood. At this time, there is no agreement among practitioners on the causes and particularly, the solutions to sludge foaming, bulking and other related sludge settling problems.

Chemical control measures such as addition of chlorine compounds, hydrogen peroxide, ozone, metal salts, and polyelectrolytes were preferred by the majority of plants in the control of foaming and bulking (Table 3). Furthermore, chlorine and chlorine compounds were by far the most popular group of chemicals (Table 4). Foam skimming, water sprays, operational control and treatment selectors were also used to control some problems. The operational controls identified in the survey included dissolved oxygen manipulation, nutrient removal and control of septicity in the mixed liquor. Several of the surveyed plants, employed multiple control schemes such as combining chemical addition with process control. The use of multiple methods as a means of controlling settling issues in treatment plants is corroborated by other studies such as Eikelboom and Grovenstein [14]), Eikelboom and Geurkink [15]; Demel and Moebius [16]); Andreasen et al. [17]; Juang [18]; and Yang et al. [19]

Table 3. Summary of Methods used by Treatment Plants to control of Foaming and Bulking.

Table 4. Typical Chemicals used by Plants for control of Bulking and foaming.

Before statistical inferences could be made, the survey data was examined for conformity to the standard Gaussian (Normal) distribution by obtaining a frequency plots using the software SPSS [20]. As the results show (Figures 1, 2, 3, 4, 5) with the exception of the variables Qmin, and Qmax, the variables the Normal distribution. A secondary purpose of the survey was to examine if plant operating parameters such as BODi, SVIM, MLSSM Qmin, and Qmax could be statistically correlated with the settling problems of foaming and bulking denoted by "PRBN". For that purpose, non-parametric Spearman’s pairwise correlations coefficients were computed for pairs of variables. As the results as shown in Table 4 no significant correlations among the pairs at the 95% level of significant. The closest to significance was obtained for the (Qmin, Qmax) pair, followed by (BODi, MLSSM) pair (87.4%), and then (Qmin, PRBN) pair (77.3%) pair. Significant correlation between Qmax and Q min is of little value in this case.

To further examine the data for any linkages between settling problems and plant operating parameters, the data was examined using "Discriminant Analysis". Discriminant analysis is a statistical technique used as a predictive tool to determine if a given individual, (such as a treatment plant) is likely to be a member of a given group (have settling problems, PRBN) based on one or more parameters. In other words can it be inferred that settling and foaming problems are associated with operating parameters of minimum flow (Qmin), maximum flow (Qmax), Sludge Volume Index (SVI), and Mixed Liquor Suspended Solids (MLSSM)? For this purpose the variable "PRBN" is assigned two possible values, "Yes" and "No" indicating the presence and absence of settling issues, respectively. The results of the Discriminant analysis are shown in Table 5 and Fig. 6. They indicate that although a majority of surveyed plants (sixty four percent) can classified as having a settling problem or lack a problem based on the variables Qmax, Qmin, MLSSM, SVIM, and BODi. However, this result is very preliminary and additional studies with a larger samples will be required before generalized conclusions can be drawn. If in the future the inference can be categorically made, it will help plant operators predict the possible onset of settling problems based on operating parameters. 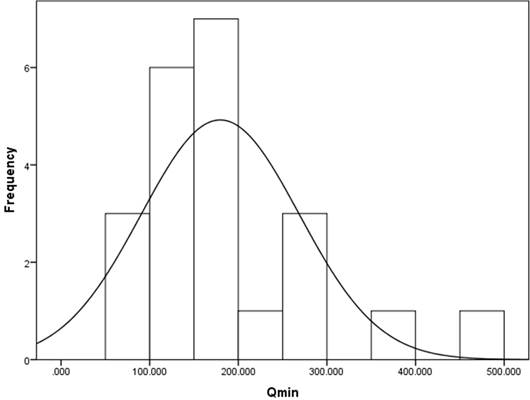 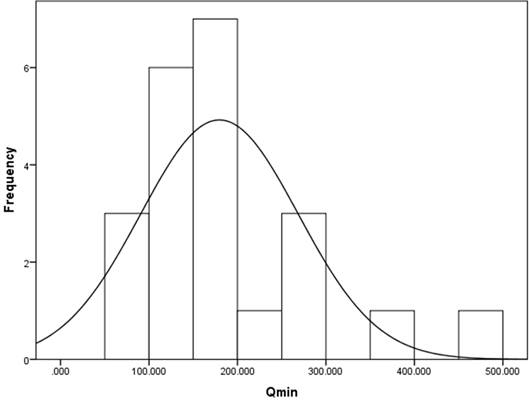 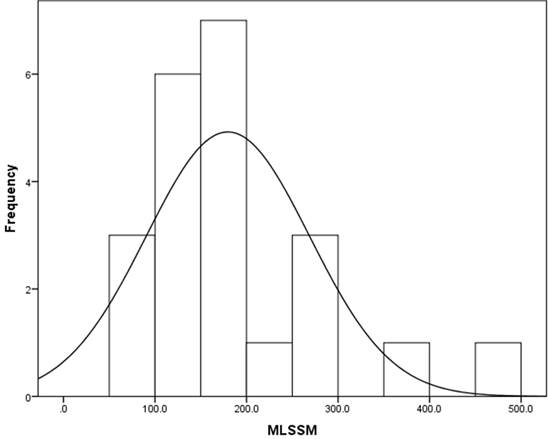 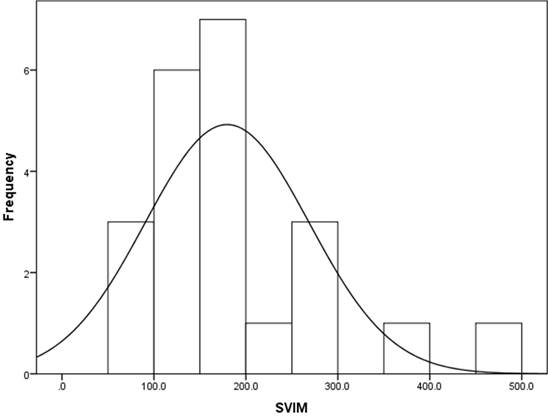 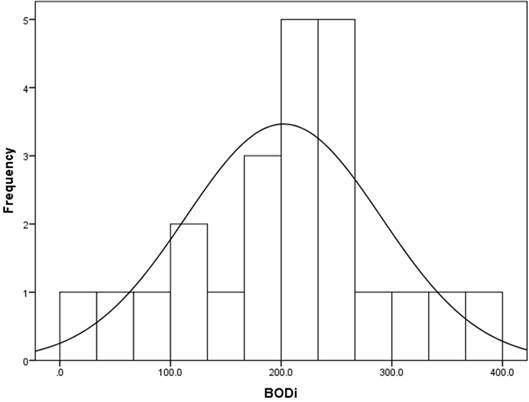 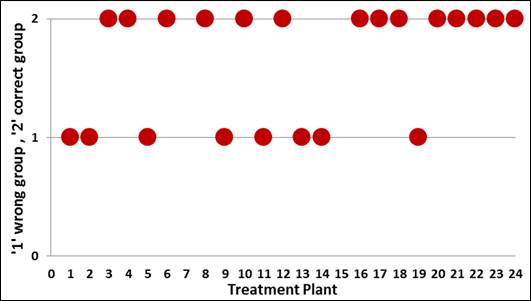 The data appears to support the earlier findings by others that most wastewater treatment plants employing the activated sludge treatment systems are increasingly experiencing sludge settling problems such as bulking and foaming. The frequencies of the settling problems vary from one plant to another, ranging from occurrences of several times a year, to year round. Generally, plant size and wastewater flow rates do not appear to be a factors, nor does the variation of activated sludge treatment systems in use.

For the control of settling problems, a majority of wastewater treatment plant operators in the survey used chemicals (Table 4). The chemicals commonly used to control bulking and foaming are chlorine and chlorine compounds, ferric sulfate, ozone, ferric chloride, and hydrogen peroxide. System and operational modifications such as selectors, control of mixed liquor concentrations, dissolved oxygen reductions, and nutrient balance were preferred by others. In several of the surveyed cases, plant operators used both chemicals and system and operational modifications to control foaming and bulking control. Anti-foaming agents, foam skimming, and water sprays were methods of choice for controlling excessive foaming, as reported in the survey.

Foaming and bulking in secondary sludge appear to be widespread in treatment plants in the states of Washington, Idaho and Oregon. Almost 80% of the plants surveyed experienced bulking or foaming. There appears to be no discernible patterns in the timing or frequency of occurrences. Plants in the survey experienced settling issues in the summer and winter months or year round. Statistical analysis of the data from the surveyed treatment plants indicated no significant relationship between plant operational parameters and bulking or foaming, although there appears to be preliminary indications of a linkage. Foaming and bulking appear to be complex and may involve intrinsic biological issues of species succession, abundance of nutrients and dissolved oxygen, and septicity of mixed liquor, involving several phyla of bacteria [21], [22]. Effective control of activated sludge plant problems of foaming, and bulking, as reported by the survey, included chemicals addition, and operational controls using methods such as dissolved oxygen manipulation, mechanical removal and water spraying. Many plants in the survey plant operators combined several control techniques for effectiveness.

The author acknowledges the contribution of graduate student Chaudhary Vijay, and the support of the civil engineering faculty in the Hal and Inge and Marcus School of Engineering at Saint Martin’s University.