Abstract: Objective: The Aim of the study is to evaluate the diagnostic and prognostic values of serum neopterin level in neonatal sepsis and to evaluate risk factors for neonatal sepsis in neonatal intensive care unit of Menoufyia University hospital. Background: Neonatal sepsis has been used to describe the systemic response to infection in the newborn infant younger than one month age. Neopterin is one of biochemical markers of immune activity, which seems to be useful in monitoring inflammatory diseases. Increased concentration of neopterin in serum is observed in conditions with involvement of cellmediated immune response. Methods: Our study was conducted on 88 neonates recruited from NICU of and divided to Group І (suspected sepsis), It includes 35 neonates with symptoms and signs suggestive of sepsis or at high risk of infection. Group ІІ (proven sepsis), It includes 38 neonates who are septic with clinical picture of sepsis and laboratory data showing sepsis, Group Ш (Controls), It includes 15 healthy neonates with no evidence of sepsis, all groups were subjected to history taking, clinical examination and laboratory Investigations included complete blood count, blood cultures, Quantitative C-reactive protein (CRP) and Serum neopterin level. Results: Serum neopterin was significantly high in Group I (44.46±24.72) and Group II (108.37±22.38) than in controls and the best cutoff value of serum neopterin to detect sepsis is 70.56 nmol/L with sensitivity 94.7% and specificity 88.6% .and that neopetrin correlated well with mortalities due to sepsis. Conclusion: Neopterin found to be a diagnostic and prognostic factor in patients with sepsis.

Neonatal sepsis has been used to describe the systemic response to infection in the newborn infant younger than one month of age and is categorized as early or late neonatal sepsis(1).Each year, an estimated four million neonatal deaths occur globally. Infections account for about 36% of these deaths. Forty percent of these four million neonatal deaths occur in developing countries(2).

Warning signs and symptoms are often subtle and can easily be confused with non infective causes such as apnea, hypothermia, and acute exacerbation of chronic lung disease. So that haematological and biochemical markers such as immature/total neutrophil ratio, platelet count, Creactive protein (CRP), various cytokines have been proposed as being useful indicators for early identification of septic infant(4).

The unnecessary exposure to antibiotics, with emergence of bacterial resistance will lead to potential poor outcomes in this vulnerable population of neonates. To identify accurately neonates with sepsis, attempts have been made to use physiologic parameters, hematologic indices, and cytokine profiles, at the time of onset of the suspected sepsis episode (5). Despite extensive investigation, no single test meets the criteria that would make it an ideal marker for early diagnosis of sepsis in the newborn. Generally screening includes a complete blood count with differential and may be accompanied by other adjuvant tests such as a C-reactive protein (CRP) (6).

Neopterin a pyrazino – pyrmidine derivative is formed from guanosione triphosphate within the biosynthetic pathway of biopterin. It is produced by the human macrophages when stimulated by interferon gama released from activated T lymphocyte(7). Neopterin is one of biochemical markers of immune activity, which seems to be useful in monitoring inflammatory diseases. Increased concentration of neopterin in serum is observed in conditions with involvement of cell mediated immune response (8).

Laboratory Investigations included complete blood count (CBC) with differential count, Blood cultures using neonatal bottles and sub cultured on blood agar plate, Antibiotic sensitivity test was done by Kirby Baur Technique, Quantitative C-reactive protein (CRP) using Latex agglutination test, Rapitex CRP kit. It was considered positive when the titer was>6 mg/L and Serum neopterin level done at the time of diagnosis of the case and will be measured by an enzyme linked immunosorbent assay (ELISA) technique using kit purchased from IBL international GMBH Hamburg Germany. Two ml of blood were withdrawn from a peripheral vein after taking an informed consent from parents of patients and controls. The sera were separated by centrifugation at 3500 rpm for 10 minutes. Sera were stored at – 20C till the time of assay. 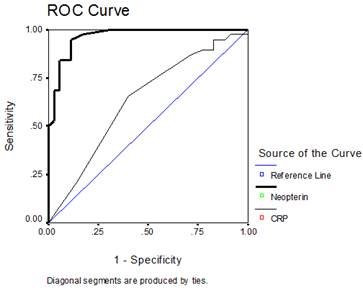 1. comparing group I and group II

2. comparing group I and group III

Table(8). Neopetrin level in relation to outcome among the studied cases.

Table (9). Sensitivity and Specificity of neopterin and CRP level as a markers in neonatal sepsis.

Neonatal sepsis is defined as a clinical syndrome of bacteremia with signs and symptoms of infection in the first four weeks of life. When pathogenic bacteria gain access into the blood stream, they may cause overwhelming infection without much localization termed as septicemia or may get predominantly localized to the lungs resulting in pneumonia, or the meninges causing meningitis (9).A better understanding of the neonatal inflammatory response to sepsis and identification of sensitive and specific markers of inflammation or rapid microbe-specific diagnostic tests would assist in the early detection of neonatal sepsis (10).Elevated levels of neopterin have been shown to be early spesfic and sensitive marker responsible for activation of the cellular immune system in several clinical settings including allograft regection, acute bacterial infections, inflammatory and malignant diseases (11).

Also our study showed that there was leucocytosisin the septic and suspected neonates. This is in harmony with Mah et al.,(17) who studied the incidence of sepsis in100 neonates and found that (90%) of them showed leucocytosis in their complete blood count before starting treatment .HSS was significantly higher in septic neonates either proved or suspected and the mean value of HSS in group II was 5.53±1.33 and mean value in group I was 4.34±1.08 . This agrees with Yousef et al.,(12) and Fergany et al., (18) who reported that HSS was significantly higher in patients with infection than patients with no infection and that HSS of the septic group was ≥3. El-Raggal et al.,(19) found that 93% of septic group had HSS ≥ 3. Badrawi et al., (15) reported that HSS score ≥3 should detect septic infants with a sensitivity of 98%. They also suggested that HSS score ≥ 5 are highly predictive of sepsis until a reliable diagnostic test is available.

In the current study, There was significant difference between the studied groups as regard CRP .The values of CRP were 34.98±30.05in Group I and 47.33±29.66 in Group II .Similar results were obtained in the study of Carrigan et al. ,(20) who reported that concentrations of CRP in septic patients ranged from 12 to 159 mg/dl. As the concentration of CRP increased rather slowly, in the initial phase, the sensitivity of sepsis evaluation was only 60%. Serial measurements at 24 and 48 hours after the onset of illness considerably improved the sensitivity (21).

In the current study we found that serum neopterin was significantly high in Group I (44.46±24.72) and Group II (108.37±22.38)(P<0.001) indicating that the serum neopterin level is a good marker for the diagnosis of neonatal sepsis. The same results was observed in the study done by Boseila et al., (16) who revealed that serum neopterin was significantly increased in the infected and suspected groups than the control group. Mitakaet al., (22) observed that neopterin level have been increased in patients progressing from gram negative sepsis to septic shock and it was reported that neopterin level are higher in patient with septic shock than in patients with non infectious SIRS and explained that neopterin biosynthesis in inflammatory state might be caused by increased levels of endogenous interferon gamma which was directly related to the extent of systemic T-lymphocyte activation. This finding can be easily explained because neopterin closely reflects the activation of both monocytes macrophages and endothelial cells, which have a central role in the pathogenesis of septic shock. This comes in agreement with Tasdelenet al., (23) who observed that neopterin is a coparameter in the diagnosis of bacterial infection as elevated concentration of neopterin are found to be relevant to the endothelial damage and septic complication, so neopterin is found to be a prognostic factor in patients with sepsis.Baydar et al., (24) Observed that serum neopterin level were significantly higher in all patients than in the control and explained that by neopterin is a biomarker of cellular immunity and therefore increased level of neopterin may reflect septic complications.

Serum neopterin level increases significantly in neonates with confirmed sepsis and in neonates with suspection of sepsis. Neopterin found to be a diagnostic and prognostic factor in patients with sepsis. Neopterin may be a useful tool in prediction of mortality in neonatal sepsis. Combined use of one or more laboratory marker as HSS and CRP with neopterin will enhance the diagnostic accuracy, early detection and consequently prevention of complications of infected cases.

many thanks to Dr. Fathia Sayed El Nemer, assistant professor of pediatrics- Menoufyia University for putting the key-stone for this study, choosing such a useful topic and for her continuous generous supervision .I'm also deeply thankful to Dr. Dina Abdel Razek Midan, lecturer of pediatrics-Menoufyia University, for her great help, sincere cooperation, Patience, meticulous supervision and guiding instructions in preparing this work .Many thanks to my family (my parents, my brother, my sisterand my wife ). Deep thanks and gratitude for all members working in NICU of Menoufyia hospital for their cooperation. And many thanks to my neonates.