Pyropia Conchocelis: Potential as an Algal Source for Carotenoid Extraction

Carotenoids are light-harvesting accessory pigments in the plastids of marine red algae (Schubert et al. 2006, Graham et al. 2008, Sangha et al. 2013，Indriatmoko et al. 2015).These accessory pigments (including phycobilins) transfer light energy to the reaction centers responsible for converting the absorbed light energy into chemical energy in the form of ATP and NADPH for carbondioxide fixation(Nurachman et al. 2015). The amounts of these pigments are crucial in determining physiological responses of marine red algae to environmental change. One potentially useful indicator of the quality of the conchocelis stage can be the photosynthetic pigment content (Amano and Noda 1978, Figueroa et al. 1995).

The physiology and biochemistry of the conchocelis stage of Porphyra and Pyropia species have received little attention (Korbee et al. 2005a, 2005b, Sampath-Wiley et al. 2008). From an applied phycological standpoint, determination of culture conditions for the optimal production of carotenoids of Pyropia conchocelis is helpful for the large-scale preparation and production of these high value bioactives (Lin and Stekoll 2011).Studies are needed on the basic information concerning how environmental factors affect the pigment content of the Pyropia conchocelis stage. We report here how the carotenoid content of Alaskan Pyropia conchocelis responds to variations of environmental variables and the potential for high valued carotenoid pigment extraction from cultured conchocelis.

Unialgal cultures of each Pyropia species were obtained from zygotospore release. Species collected were Pyropia abbottiae Krishnamurthy- strain PaSGS01, P. hiberna S. C. Lindstrom et K. M. Cole, strain - PeJB03,P. torta Krishnamurthy-strain PtCH13a and P. sp., strain PiSC14. (Note: the species we identify as P. sp. is morphologically indistinct from Porphyr apseudolinearis Ueda, and it will be described as a distinct species as per S. Lindstrom, personal communication.). Mature blades of the gametophyte stage of each species were collected from the field. Blades were washed and scrubbed with sterile seawater to remove surface contamination. The cleaned blades were placed in sterile seawater in petri dishes for zygotospore release. After 24-36 hours the blades were removed and the dishes incubated in Provasoli's enriched seawater (McLachlan 1973) under 16L:8D photoperiod at 11°C. Conchocelis segments (around110-250 µm ) of each species were placed in 24 cell well plates (one piece per 3 mL well)and incubated at 30 psu salinity and 11°C(100-120 µmol photons∙m-2∙s-1irradiance) for the culture of pure genotypes. These clones were used for the generation of bulk amounts of conchocelis to provide material for specific experiments. Bulk conchocelis were incubated at 11°C and 25 µmol photons∙m-2∙s-1irradiance with f/2 culture medium (Guillard and Ryther 1962).

Pigment experiments of conchocelis were conducted at 11°C illuminated with cool-white fluorescent lamps. Irradiance gradients were obtained by wrapping the culture containers with varying layers of white paper and determined using a Li-Cor Radiation Sensor (Li-190SB Quantum Sensor). The pH of the culture medium was adjusted to 7.8-8.0(the ambient pH of the seawater in the inside waters of SE Alaska)using6 MHCl or 6 M NaOH. The salinity of experimental seawater was set at 30 psu. Culture media were changedevery7 days. Longday(16L: 8D)photoperiods were used. Nutrients were added as an f culture medium concentration, which has a nitrogen concentration of 5.87 mM. Therefore, nutrient levels of 0, f/4, f/2 and f concentrations represented 0.02, 1.47, 2.94 and 5.87 mM nitrogen concentration, respectively (conchocelis at 0 nutrient concentration represented those incubated in natural seawater with a nitrogen concentration of0.02 mM, i.e., no f culture medium was added).In order to ensure sufficient inorganic carbon source available to the conchocelis, culture media were supplemented with5 mM NaHCO3. For pigment experiments different levels of three environmental factors were employed: nutrient levels of 0, f/4, f/2, f concentration; irradiances of 0, 10, 40, 160 µmol photons∙m-2∙s-1irradiance and culture age of 10, 20, 30, 60 days. 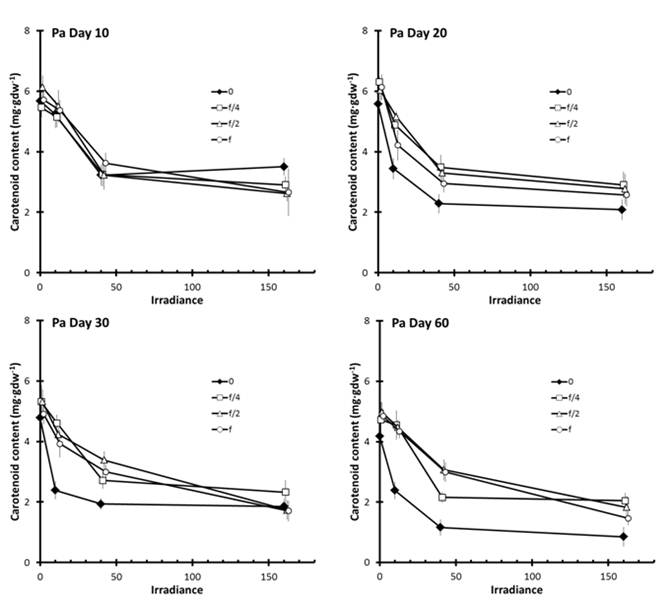 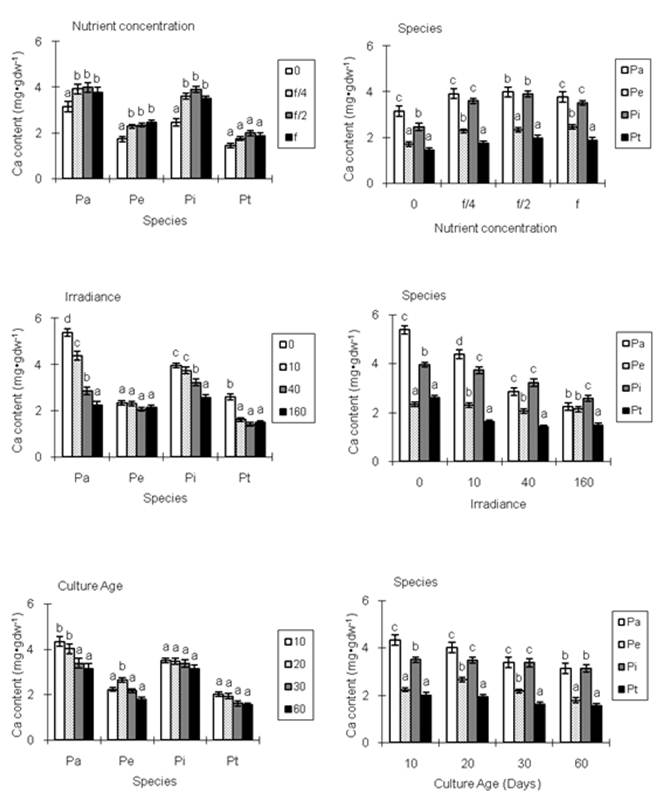 Fig. 3. Comparison of pooled carotenoid (Ca) content of Pyropia conchocelis for each parameter tested. Error bars are ± S.E. Different letters above the bars indicate significant difference (P<0.01) based on multiple comparisons using the Newman-Keuls test. Letter comparisons are relevant within a species (for left figures) and relevant between species (for right figures). Units of parameters tested are: irradiance (µmol photons∙m-2∙s-1), nutrient concentration (expressed as the f fraction) and culture duration (day).

Results from pooled data analyses showed that the conchocelis of P. abbottiae and P.sp. contained significantly higher carotenoid content than the other two species under all of the experimental conditions (Fig. 3).P. hiberna had the lowest carotenoid content for all levels of the three factors (Fig. 3).

Because photosynthetic pigments are crucial for sustaining all life activities in the algal cell and are essential components for algal photosynthesis, variations of pigment content are important aspects of the growth, development, physiological responses and survival of the algae (Waaland et al. 1974, Fortes and Lüning 1980, Korbee et al. 2005b, Sefyabadi et al. 2011, Wahidin et al. 2013，Wondraczek et al. 2013, Ota et al. 2015). Our experimental findings show that photosynthetic pigments of the conchocelis of four Pyropia species are significantly influenced by environmental factors such as irradiance, nutrient concentration and culture age, including some interactions among these factors. Pigment content of the conchocelis appears to be sensitive to environmental change and could be used to indicate the physiological state of the sporophytic stage of Pyropia.

Sampath-Wiley et al..(2008) reported that the highest carotenoid content in Porphyra umbilicalis thalli was about 0.4mg∙gfw-1(~4mg∙gdw-1). In this paper we report levels of carotenoid pigments (6.8-7.0 mg∙gdw-1) as much as 75% greater. However, the main finding here is that levels of these pigments can vary widely depending on the culture conditions.

4.2. Light and Nutrient Are Important Factors Related to Pigment Variation

It has been well documented that changes in light intensity could resul tin a large change in the photosynthetic pigment content of algae(Beach and Smith 1996, Figueroa et al. 1997, Khoyi et al. 2009, Chaloub et al. 2015 )and that lower irradiance levels require greater amounts of light harvesting molecules to perform photosynthesis (Lüning 1990). From our results, carotenoid content of the conchocelis was found to vary inversely with the amount of available light. Moreover, carotenoid content was observed to be higher in complete darkness or at low irradiances and significantly declined at higher irradiances. This result mirrors that found with phycobilins in these same species (Lin and Stekoll 2011). It appears that these species in the conchocelis stage are shade adapted plants in an environment that rarely receives high light irradiance. In fact, both P. abbottiae and P. torta exhibit photoinhibition at higher light irradiances (Lin et al.2008).

It is interesting that the conchocelis tufts maintain very high levels of carotenoid pigments even when kept in the dark for as long as 60 days. Although there is no carbon fixation happening in the dark, there is measurable respiration occurring (Lin et al. 2008), and thus, energy reserves must become depleted. In spite of the decrease in energy reserves, the photosynthetic pigments remain high, suggesting that these algae must be ready for light harvesting at anytime when light becomes available.

It is well known that the conchocelis of Porphyra/Pyropia burrow into shells or barnacle tests in nature. It is not known how long the conchocelis can persist in these environments. In Alaska, the gametophytes of P. abbottiae and P. torta first appear in late winter and early spring and are gone by mid-summer. The conchocelis of these species, in order to produce the next generation of gametophytes, must live throughout the summer when temperatures are high but nutrients are low and through the winter when there is very little sunlight. It is reasonable to conclude that the environmental constraints in the Alaskan waters have contributed to the fact that these algae can maintain their photosynthetic pigments in conditions of low nutrients and/or low light for several months.

Many studies have shown that nutrients, especially nitrogen affect both growth, development and pigment content of algae (Lapointe and Ryther 1979, Meiqin et al. 1979, Wheeler and North 1980, Hannach 1989, Grobe et al. 1998, Korbee et al. 2005a, 2010, Kim et al. 2007, Xie et al. 2013, Imaizumi et al. 2014, Chaloub et al. 2015). Our experimental results also indicate that nutrients are very important for the sporophytic stage of Pyropia. Under the culture conditions tested, especially under higher light irradiances, conchocelis grown in media with nutrients added usually had much higher content of photosynthetic pigments in contrast to cultures with no nutrients. Nitrogen source and supply in coastal waters can take place with large seasonal fluctuations. Shortage of nutrients would exert a potentially negative effect on the growth, development and survival of the natural populations of Porphyra/Pyropia sporophytes.

Sufficient nutrient supply is necessary to promote higher pigment content for Pyropia conchocelis. However, different species exhibited differences in nutrient requirements. For example, higher nutrient concentration (f concentration)was favorable for carotenoid production in P. hiberna. For the other threes pecies, intermediate nutrient concentrations (f/4-f/2) were sufficient for high pigment content. Culture age was also a factor in the production of pigments. P. abbottiae tended to synthesize significantly less photosynthetic pigments with prolonged culture age, in contrast to the other three species which had relatively constant amount of pigment production throughout the entire period of culture.

There are three basic classes of natural pigments found in marine red algae, i.e. chlorophylls, carotenoids and phycobilins. Besides their roles in photosynthetic and photoprotective functions, it has been reported that these natural pigments exhibit various biological properties such as antioxidant, anticancer, anti-inflammatory, anti-obesity, anti-angiogenic and neuroprotective activities. These properties provide health benefits and have potential applications in foods, cosmetics and pharmaceuticals(Okaiet al. 1996, Shetty et al. 2005, Yabutae t al. 2010, Pangestutia and Kim 2011, Sangha et al.2013, Wang et al. 2015). It has been shown that extracts from Porphyra/Pyropia contain important bioactive compounds. For instance, certain low molecular weight peptides containing Asp, Ala and Glu possess immunosuppressive, antioxidant and antihypertensive capacities (Qu et al. 2010，Cian et al. 2012). It is worthwhile to explore the use of these high-value bioactive properties. Of interest in this respect is that the carotenoids are not only photosynthetic accessory pigments but also possess important bioactive properties that can be beneficial to human health in many different ways(Okuzumi et al. 1990, Schubert et al. 2006, Sachindra et al. 2007).

The carotenoids are not only beneficial to human health, but also valuable as a commodity. The current price of carotenoids has been as high as $5-400 per microgram depending on different types, purities and sources (Sigma Chemical, St Louis, MO). For commercial production, there are several advantages in using Porphyra/Pyropia conchocelis material for the preparation and production of high-value phycological extracts: (i)the conchocelis stage can be grown relatively quickly using standard culture apparatus, (ii) the cultures of the conchocelis stage can be maintained indefinitely in a nonreproductive state under the proper culture conditions,(iii) conchocelis grown under the proper conditions have relatively high concentrations of phycobiliproteins, carotenoids (Lin and Stekoll 2011),(iv) high-quality and high purity extracts can be obtained from cultures of the conchocelis stage using simple extraction procedures and (v) target products can be acquired at any time, year-round, without relying on the availability of wild algal material(Stekoll et al. 1999, Lin and Stekoll 2011).Furthermore, it is possible to produce multiple kinds of high-value components such as carotenoids , phycoerythrin and phycocyanin simultaneously from conchocelis material. Based on complete combination experiment of 4 levels with three factors (nutrient concentration, irradiance and culture age), the present study investigated the effects of environmental variables on the carotenoid content of Porphyra conchocelis and determined the optimal cultural conditions, which would helpful for obtaining algal material with higher pigment content and extraction of high value pigment. The results presented here can contribute to creating the optimal culture conditions for producing the maximal yield of carotenoids from Pyropia conchocelis with implications for the commercial production of these pigments.

The work reported here was supported by Saltonstall-Kennedy Funding (NA76FD0035) administered through NOAA,U.S. Department of Commerce and in part by special research project funding of China National Marine Public Service Industry (Grant No. 201005020-2) and Xiamen Municipal Science and Technology Key Research Project Program(Grant No.3502Z20111001). We thank S. Lindstrom for assistance with this research including algal identifications. We also thank C. Good and S. Hall for their assistance in the laboratory.