Abstract: In order to find new actinomycete resources for discovering new drug leads, the actinomycete associated with lichens was studied. Three species of lichen samples were collected from 3 locations of Yunnan. Actinomycetes in the samples were isolated with 11 media, and identified with 16S rRNA gene sequence procedures. Bacteria of two of the three species were sequenced by using 454 pyrosequencing. The results of both pure culture and 454 pyrosequencing were analyzed and compared. Anti-microbial activities of pure cultural strains were determined with agar diffusion methods. 17 genera of actinobacteria were isolated and identified from Lepraria yunnaniana, and 10 genera of them were exclusive. 12 genera were isolated and identified from Punctelia borreria, and 4 genera of them were exclusive. 11 genera were isolated and identified from Parmotrema austrosinense, and 5 genera were exclusive. Total 28 genera were isolated and identified from the three lichens. Streptomyces, Rhodococcus and Nocardia were distributed widely in the three species of lichens. The results from 454 pyrosequencing revealed total 567 taxa of bacteria were detected; the phylum actinobacteria of them had 107, and was 19%. The phylum Actinobacteria from Lepraria yunnaniana had 99, and from Punctelia borreri had 92. Taxonomic positions of 33 taxa belonging to the phylum Actinobacteria were not identified by using the method. These results showed that the diversity of actinomycetes associated with the three lichens was complex and different from each other. 20%, 19%, 12%, 17%, 9%, and 11 % actinomycete strains had anti-microbial activities against Bacillus subtilis subsp. Subtilis, Staphylococcus aureus subsp. Aureus, Escherichia coli, Pseudomonas aeruginosa, Mycobacterium tuberculosis and Candida albicans respectively. There are 30,000 species of lichens on the earth. Diversity of lichen-associated actinomycetes was very rich, and the anti-microbial activities were higher. Therefore lichen-associated actinomycetes are an important source for discovering new drug leads.

Lichen is one part of biosphere, and belongs to a symbiont of lichenized fungi and alga or cyanobacteria. Most of lichenized fungi belong to Ascomycota, and small number is Basidiomycota (Wei 1991). Up to now, known kind of lichens is about thirty thousand species in the whole world (Feuerer and Hawksworth 2007; Wang 2012). More thousands of bioactive compounds were discovered from lichen, mainly usnic, gyrophoric and diffractaic acid, polysaccharides, anthraquinones and terpene, and a part of them were used in clinic (Kupchan and Kopperman 1975; Sunil and Klaus 1999; Vertika et al. 2010; Santiago et al. 2013; Sinem and Kadir 2013).

Recent years, some actinomycetes were isolated and identified from lichens (González et al. 2005; Li et al. 2007; An et al. 2009; Hideki et al. 2011; Olga et al. 2011; Pankratov 2012). Lichen is named "pioneers" and "long life organisms". Topography, geology and climate of Yunnan are extremely kaleidoscopic change. It is one area of the richest biodiversity in the world. There is large number of lichens in Yunnan (Wang and Qian 2013). Three species of lichens were selected. Cultivable and uncultivable actinomycetes and anti-microbial activities were studied. Some results are reported here.

The test samples of lichens were collected from the surface of the trees or stones (Fig. 1 and Table 1). Each sample was immediately transferred to sterile paper bag. The sample was put in dish and dried for 7 days at 28 ºC.

2.2.1. Isolation Medium for Actinobacteria (Per Liter)

Total eleven media were used. Four of them were better for isolating the actinobacteria. They are:

The plate dilution method was used to isolate the actinobacteria. 2 g of each dried sample was grinded with a sterile glass homogenizer, and dissolved in 18 ml of sterile water containing 0.1 % Na4P2O5, followed by shaking at 220 rpm/min for 60 min. The suspension was treated with ultrasound waves for 40s at 150W before coating (Jiang et al. 2010). The suspension was diluted from 10-1 to 10-5, and 0.1 ml of three dilutions, 10-3, 10-4 and 10-5 was used to coat the plates and cultivated for 10 to 25 days at 28 ºC. Subsequently, the colonies were counted, and a single actinomycete colony was picked and inoculated to a slant with the same isolation medium. Samples of three lichens were isolated for three times using different media. The pure strains were conserved at 4℃ and in 20% of glycerol at -20℃.

A total 480 pure strains were isolated from the three lichens samples. 221 strains were identified after eliminating duplicate strains based on morphological and cultural characteristics. DNA of the pure strains was extracted for 16S rDNA analysis (Orsini and V. Romano-Spica, 2001). PCR amplification of the 16S rDNA, followed by purification and sequencing of the PCR products were performed as previously described (Cui et al., 2001). The forward primer F8 (8±27; 5’-GAG AGT TTG ATC CTG GCT CAG-3’) and the reverse primer (1510±1492; 5’-GGT TAC CTT GTT ACG ACT T-3’) were used. The resulting sequences were manually aligned using the sequences from available, public databases. All pure cultivated strains were identified at a genus and species level.

Genomic DNA of lichen samples was extracted with InviMag® Stool DNA kit (Invitek, Germany) (Li 2009). Amplification of the 16S rDNA V3 tags was carried out by using the primers: P1 (V3F): "5-NNNNNNNNCCTACGGGAGGCAGCAG-3"; P2 (V3R): "5-NNNNNNNNATTACCGCGGCTGCT-3" and the methods described by Zhang and Chen (2010) and Wang et al. (2012). The tags were sequenced by 454 pyrosequencing method (GS FLX Titanium [Roche]) (Margulies 2005). The QIIME were employed to analyze the bacterial diversities and OTU.

Composition of actinobacteria associated with three species of lichens is showed in Table 1.

It distributes in temperate zone, Yangtze basin in China, and always grows on stones and trees. The sample was collected from Mingfeng Mountain, Kunming. 202 pure actinomycetes strains were isolated from the lichen. 72 strains of them selected after eliminating duplicate strains based on morphological and cultural characteristics, and the 16S rDNA sequences were analyzed. A phylogenetic analysis was performed. The strains were identified at the genus and species levels. The 72 strains comprised 17 genera of actinobacteria: Actinomadura, Amnibacterium, Cellulomonas, Candidatus, Kocuria, Kribbella, Microbacterium, Micrococcus, Microlunatus, Micromonospora, Mycobacterium, Nocardia, Pseudonocardia, Rhodococcus, Streptomyces, Streptosporangium and Williamsia. Candidatus is an Incertae sedis which is consist of many "species" (Murray and Schleifer 1994). Williamsia deligens identified in this study was found in human blood (Yassin and Hupfer 2006). The genus Amnibacterium has only two species up to now (Kim et al. 2011). Strain YIM 130106 belonged to this genus, its 16S rDNA sequence similarity with the two known species was below 98.07%, and was possible new species (Xu et al. 2007; Alexander et al. 2010). Members of streptomycetes were predominant. Number of Streptomyces cyaneofuscatus and S. niveus was most, and next was S. sindenensis, S. spiroverticillatus, S. candidus, S. xanthochromogenes, S. globisporus, S. lincolnensis and S. albovinaceus; Rhodococcus fascian had 282×103/g.

Punctelia borreri belongs to Parmeliaceae, and lichenized Ascomycotina fungi, and distributes widely in temperate zone. Some species of the genus are used as Chinese medicine. 166 pure strains of actinomycetes were isolated form the lichen samples. 83 strains of them were identified by 16S rDNA sequencing. 12 genera of actinobacteria were identified. They were members of Amnibacterium, Arthrobacter, Cellulosimicrobium, Corynebacterium, Kineococcus, Mycobacterium, Nocardia, Oerskovia, Rhodococcus, Saccaropolyspora, Streptomyces and Williamsia. Numbers of Streptomyces cyaneofuscatus, S. niveus and S. globisporus was more than the others on the isolation plates.

Parmotrema austrosinense belongs to Parmeliaceae. The samples were collected from old Puer Tea tree in Wuliang Mountain, Yunnan. The sample was isolated for three times, and 112 pure strains were obtained. 66 strains of them were identified by 16S rDNA sequencing. The 66 strains were consisted of 11 genera of actinobacteria, Actinoplanes, Arthrobacter, Curtobacterium, Friedmanniella, Kineococcus, Microbacterium, Nocardia, Pseudosporangium, Rhodococcus, Saccharothrix and Streptomyces. Streptomyces niveus was the most. Rhodococcus yunnanensis was also common. The genus Pseudosporangium was published in 2008, and only one species, Pseudosporangium ferrugineum (Matsumoyo et al. 2008). 16S rDNA sequence similarity of Strain YIM 130206 with P. ferrugineum was 97.98%, and was possible new species.

Table 2. Composition of actinobacteria associated with three species of lichens. 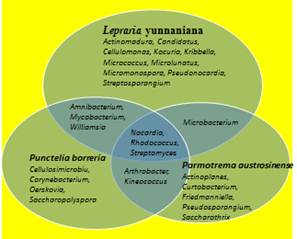 Fig. 2. A comparison of actinomycete composition associated with three species of lichens.

3.4. A Comparison of Actinomycete Diversity at Family Level Using 454 Pyrosequencing and Pure Cultures

Anti-microbial activities of 221 pure actinomycete strains were determined by using 6 test microorganisms. The results were showed in Table 5. The results revealed that 20%, 19%, 12%, 17%, 9% and 11% of strains respectively had anti-microbial activities against one to six of Bacillus subtilis subsp. subtilis (CGMCC1.1849); Staphylococcus aureus subsp. aureus (GMCC1.2386), Escherichia coli (CGMCC1.2385), Pseudomonas aeruginosa (CGMCC1.2387), Mycobacterium tuberculosis and Candida albicans. Inhibition of a part of strains was stronger, and inhibition zone were 40mm in diameter. 80.4 % of strains with antimicrobial activities were streptomycetes. These strains with stronger inhibiting microbes and possible novel species will be fermented, and the active substances are isolated.

Up to now, twelve genera of actinomycetes, Actinomadura, Actinomycetospora, Actinoplanes, Amycolatopsis, Micromonospora, Planobispora, Pseudonocardia, Rhodococcus, Saccharapolyspora, Streptomyces, Streptosporangium and Geodermatophilus were isolated and identified from lichens (González et al. 2005; Li et al. 2007; An et al. 2009; Hideki et al. 2011; Olga et al. 2011; Pankratov 2012 ), and revealed that actinomycetes from lichens were one of potential source for developing novel drug. In this study, 17, 12 and 11 genera of actinobacteria were isolated and identified from the samples of Lepraria yunnaniana, Punctelia borreri and Parmotrema austrosinense respectively. It is worth to show that 16S rDNA similarity of 33 (15 %) of 221 strains with known species were below 98.5%, they should be considered as new species (Xu et al. 2007; Alexander et al. 2010). Up to now, valid published of actinobacteria are 222 genera (Goodfellow et al. 2012). 28 genera were isolated and identified from only three lichens in this study. There are 30 thousand species of lichens at least in the world. Yunnan is an area having rich biodiversity, and a large numbers of lichens existed there. So the standing stock of actinomycete resources associated lichens should be tremendous, and should become one of important sources for development of new drugs.

Based on this study, the most of actinomycetes associated lichens are still uncultivable. How to become the uncultivable to cultivable actinomycetes is one of important prerequisites for discovering of novel drug leads. In order to obtain more unknown (or new) actinomycetes, selective isolation methods themselves should be studied, renovated and improved ceaselessly.