Plant growth promoting rhizobacteria are known to rapidly colonize the rhizosphere and suppress soil borne pathogens at the root surface (Rangajaran et al., 2003) and also be beneficial to the plant by stimulating growth (Bloemberg and Lugtenberg, 2001; Moeinzadeh et al., 2010). The plant growth promoting ability of these bacteria is generated mainly by the production of indole-3-acetic acid (IAA) (Nagarajkumar et al., 2004). Pseudomonas ﬂuorescens is adapted to survival in soil and colonization of plant roots (Kiely et al., 2006) and this applies also to the particular case of biocontrol agents from this species. Several bacteria thrive on abundant nutrients in the rhizosphere and stimulate growth (Gray and Smith, 2005). Plant growth promoting rhizobacteria (PGPR) have been reported to directly enhance plant growth by a variety of mechanisms, viz., fixation of atmospheric nitrogen that is transferred to the plants, production of siderophores that chelate iron and make it available to the plant roots, solubilization of minerals such as phosphorous and synthesis of phytohormones (Glick, 1995).

Auxins have been implicated in signaling between microorganism and plants (Spaepen et al., 2007) leading to stimulation of cell division, initiation of lateral and adventitious roots (Malamy and Benfry, 1997), cell enlargement (Salisbury, 1994), phototropism, geotropisms and apical dominance (Ahemad and Khan, 2010), increase rate of seedling emergence (De Freitas and Germide, 1990) and results into elongation of stems and roots (Yang et al., 1993). It plays a major role in xylem and root formation (Davies, 1995).The stimulation of growth of roots results in enhances uptakes of nutrients by the association plants (Lifshitz et al., 1987). Therefore, promotion of plants growth after inoculation with rhizobacteria has been attributed to IAA production in Azospirillum brasilense (Okon and vanderleyden, 1997), Rhizobium species (Hirsch and Fang, 1994) and in Pseudomonas (Hirsch and Fang, 1994) as indicated in fig. 1.

Most commonly, IAA producing PGPR strains are believed to increase root growth and length resulting in greater root surface area which enables plants to access more nutrients from soil (Gupta et al., 2002). Pattern and Glick (2002) demonstrated that bacterial IAA from P. putida played a major role in the development of host plant root system. Similarly, IAA production in P. fluorescens HP72 correlated with suppression of creeping bent grass brown patch (Suzuki et al., 2003). This was introducing the some isolate of Pseudomonas ﬂuorescens that have a potential to synthesis of phytohormones. In addition, to create awareness to scholars to investigate further study on these bacteria and also on other microbes as well as to invite individual for inoculum preparation of these bacteria as inoculant. Therefore, the present study was designed for isolation of some Pseudomonas ﬂuorescens species from health faba bean rhizosphere soil and tested for indole acetic acid (phytohormone) production. 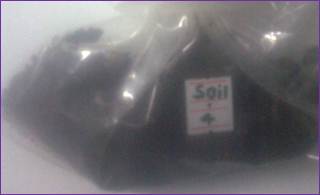 Isolation of Pseudomonas fluorescens isolates studies were carried out on King’s B medium (KBM) (King et al., 1954). 1g of rhizosphere soil sample was suspended in 99 ml of sterile distilled water. Samples were serially diluted and 0.1 ml of sample was spreaded on King’s B medium plates. After incubation at 28°C for 48 h the plates were exposed to UV light at 365 nm for few seconds and the colonies exhibiting the fluorescence were picked up and streaked on to the slants for maintenance, purified on King’s B medium plates and also desigented as P f1-12 which stands for Pseudomonas fluorescens isolates used for further studies as indicated in fig. 3. 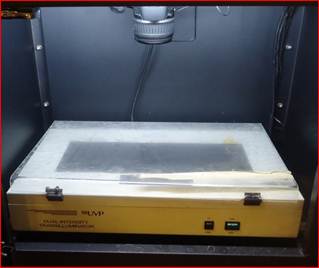 All the Pseudomonas fluorescens isolates were tested for IAA production (Loper and Schroth, 1986). The test Pseudomonas fluorescens isolates culture were inoculated in the nutrient broth with L-tryptophan 500 mg/l at 28 ± 2°C for 1 week. Fully grown cultures were centrifuged at 3000 rpm for 30 min as indicated in fig. 4. The supernatant (2 ml) was mixed with two drops of orthophosphoric acid and 4 ml of the Salkowski reagent (50 ml, 35% of perchloric acid, 1 ml 0.5 M FeCl3 solution). Development of pink color indicates IAA production (Bric et al., 1991). 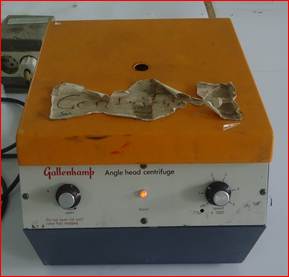 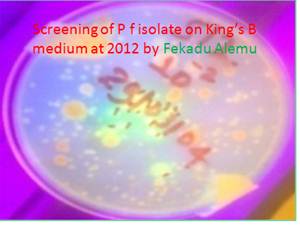 Figure 5. Pseudomonas fluorescens was isolated based on their pigment production under UV light at 365 nm. 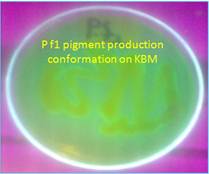 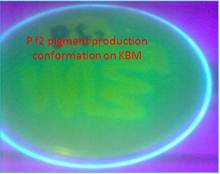 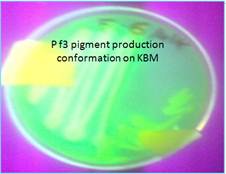 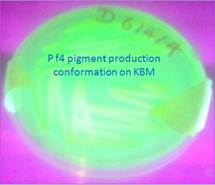 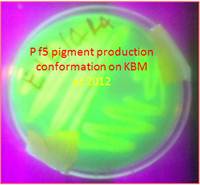 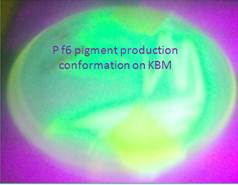 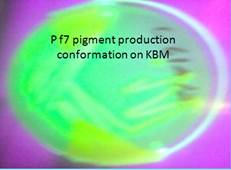 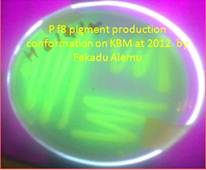 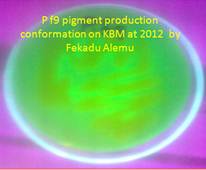 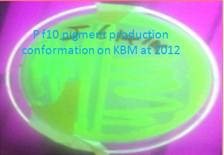 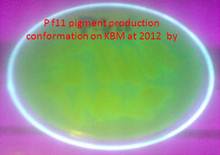 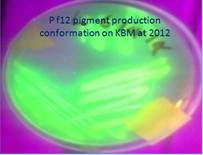 In the present study, twelve Pseudomonas fluorescens were isolated from the rhizospheric soil of healthy faba bean plants and were tested for their IAA production. As aresult all of Pseudomonas fluorescens isolates exhibited the plant growth promoting (PGP) traits of indole acetic acid (IAA) production activity. Hence, they have been advocated as plant growth promoting rhizobacteria. Similarly, PGPR colonize roots of plant and promote plant growth and development through the mechanisms. PGPR stimulate plant growth by the mechanisms of production of phytohormones are usually believed to be involved in plant growth promotion (Glick, 1995; Lalande et al., 1989). So the present study of Pseudomonas fluorescens isolates were positive and agreement with earlier reports. Similarly, PGPR traits showed positive for the traits of IAA (Ramyasmruthi et al., 2012). The ability of bacteria to produce IAA in culture depends on the availability of precursors. In same way as, it has been reported that IAA production by PGPR can be influenced by substrate availability (Mirza et al., 2001). When the media were supplemented with tryptophan, the IAA production increased substantially (Suresh et al., 2010).

It is expected that inoculation with Pseudomonas fluorescens isolates containing PGP characteristics consequently promote root, shoot growth and lateral roots as well as nodulation. The ability of bacteria to produce IAA in the rhizosphere depends on the availability of precursors and uptake of microbial IAA by plant. Microbial biosynthesis of IAA in soil is enhanced by tryptophan from root exudates or decaying cells (Benizri et al., 1998; Frankenberger and Arshad, 1991) and also improves plant growth by increasing the number of root hairs and lateral roots (Okon and Kapulnik, 1986). IAA is one of the most important phytohormone and function as important signal molecule in the regulation of plant development during the onset of symbiosis in legumes (Barker and Tsgu, 2000). By sequence alignment and phylogenetic analysis of amino acid residues indicated that GH widely conserved in other species were identified (Nasr et al., 2014)

Application of plant hormone into soil is not as such common and practices that improve plant growth and yield. For this reason, inoculation of Pseudomonas fluorescens isolates as inoculant will be solve deficiency of plant hormones in plant through this mechanisms. So this is an acceptable method of improvement of crop growth and yields. So this type of study is necessary to advocates that the environmental friendly phytohormone producer use for increase production of faba bean crop supplement of hormones. The result will be need further exploited for the commercial production of an inoculum to use a as plant hormones and its incorporation in the production of Vicia faba.

I am grateful thanks to Addis Ababa University, Department of Microbial, Cellular, and Molecular Biology, College of Natural Sciences which are giving facilities to conduct this study.