Growth medium or culture medium is a liquid or gel that is designed for the growth of microorganisms, cells or small plants such as moss [1]. Different types of media are available for the growth of different types of cells such as nutrient broths and agar plates [2]. Protose is a specially developed product containing various combinations of proteoses, peptones and amino acids [3]. It is an enzymatic digest of mixed proteins, and recommended for fermentation and vaccine industries [4, 5]. It is an exceptionally light colored peptone, which gives clear solution. It is used in culture media for bulk production of enzymes, antibiotics, toxins, veterinary preparations, etc. [6].

Biofield energy treatment is a type of energy therapy (putative energy fields) that has been considered as energy therapy by the National Institute of Health/National Center for Complementary and Alternative Medicine (NIH/NCCAM) [9]. The energy therapies include magnet therapy, bio-electromagnetic therapy, healing touch, etc. and comprise low-level of energy field exchanges [10]. The human body has the unique bioenergetics field that consists of energy structures such as biophotons [11]. The biophoton is non-thermal origin in the UV-visible spectrum, emitted from a biological system. These biophotons contain informations that regulate all the system of human body in order to communicate and work coherently [12]. This is generally observed in the healthy condition of human body. However, these biophotons are disordered in diseased conditions; resulting in communication problems among cells, organs, and energy systems [13]. For instance, the cancer cells are discordant with the rest of cells of body, which result in uncontrolled growth and lead to endanger the survival of the body [14].

Hence, considering the impact of biofield energy treatment, this study was aimed to evaluate the effect of biofield treatment on the protose using various analytical techniques.

The XRD study of protose samples (control and treated) was done on Phillips (Holland PW 1710) X-ray diffractometer. The system was equipped with nickel filter and copper anode, the wavelength was set to 1.54056Å.

Where, (d50) Control and (d50) Treated are the average particle size of control and treated samples, respectively; similarly the d99 was calculated.

The surface area of control and treated protose was analyzed based on the ASTM D 5604 method using the Brunauer–Emmett–Teller (BET) surface area analyzer (Smart SORB 90). The instrument range was set to 0.2 m2/g to 1000 m2/g. The following formula was used for the percent change in surface area

Here, S Control and S Treated is the surface area of control and treated samples, respectively.

The melting temperature and latent heat of fusion of control and treated protose were determine using the Pyris-6 Perkin Elmer differential scanning calorimeter. The analytes were heated at the rate of 10ºC/min under the air atmosphere with flow rate of 5 mL/min. An empty pan sealed with cover lid was used as the reference pan. The latent heat of fusion (ΔH) and the melting temperature (Tm) of both the control and treated samples were obtained from the DSC thermograms.

The TGA/DTG analysis of both control and treated samples of protose was carried out on Mettler Toledo simultaneous TGA/DTG analyzer. The analytes were heated up to 400ºC from the room temperature, at the heating rate of 5ºC/min, under the air atmosphere. The onset temperature of thermal degradation and temperature at which maximum weight loss occur (Tmax) in samples were obtained from the TGA/DTG thermogram.

The FT-IR spectroscopy of both the control and treated samples of protose was carried out to ascertain the effect of biofield energy treatment on molecular level like dipole moment, force constant, and bond strength in chemical structure [20]. The samples were prepared by crushing the powdered protose sample with spectroscopic grade KBr into fine powder and then pressed into pellets. The FT-IR spectra were acquired from the Shimadzu’s Fourier transform infrared spectrometer (Japan) in the frequency region of 500-4000 cm-1. 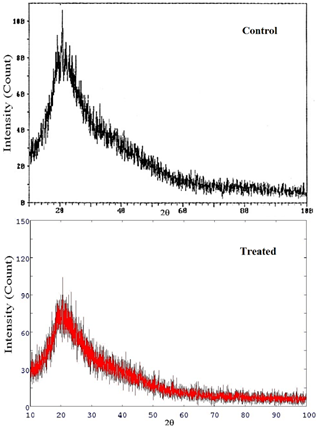 The halo patterns of XRD peaks suggest the amorphous nature of both control and treated samples [21]. The XRD study suggested that biofield energy treatment did not cause any alteration in the physical form of protose with respect to the control sample. 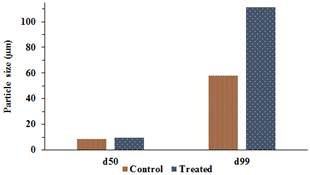 It is assumed that the biofield energy probably induce the agglomeration process in treated protose sample, which resulted into increases of average particle sizes of treated sample. Recently, our group reported the biofield induced alteration in the particle size of manganese oxide [22]. 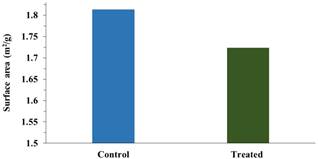 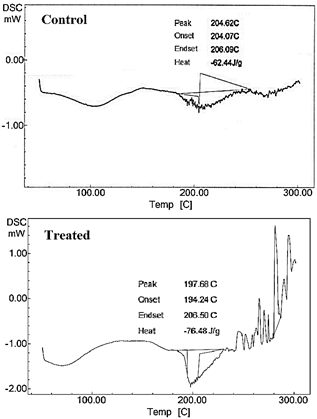 The result showed the slight decrease in the melting temperature of treated sample as compared to the control sample (Table 1). Further, the latent heat of fusion corresponding to the control and treated protose samples was observed as 62.44 J/g and 76.48 J/g, respectively (Table 1).

Table 1. Thermal analysis of control and treated samples of protose.

The FT-IR spectra of the control and treated protose are shown in Fig. 6. The protose is composed with combinations of proteoses, peptones, amino acids etc. [6]. Due to presence of these different components, it contain several functional groups such as amide (N-H, C=O), aromatic ring (C-H, C=C) etc. The FT-IR spectrum of control sample showed the vibrational peak at 3224 cm-1 that was attributed to O-H or N-H stretching due to presence of amino acids. This peak was appeared at the upstream frequency region i.e. at 3261 cm-1 in the treated sample.

The stretching frequency of any bond is directly proportional to the force constant and inversely proportional to reduced mass [26, 27]. Therefore, it is presumed that biofield energy treatment might increase the dipole moment of N-H or O-H bond in treated protose molecules as compared to the control. As a result, the force constant and bond strength of N-H or O-H group might increase in the treated protose as compared to the control. 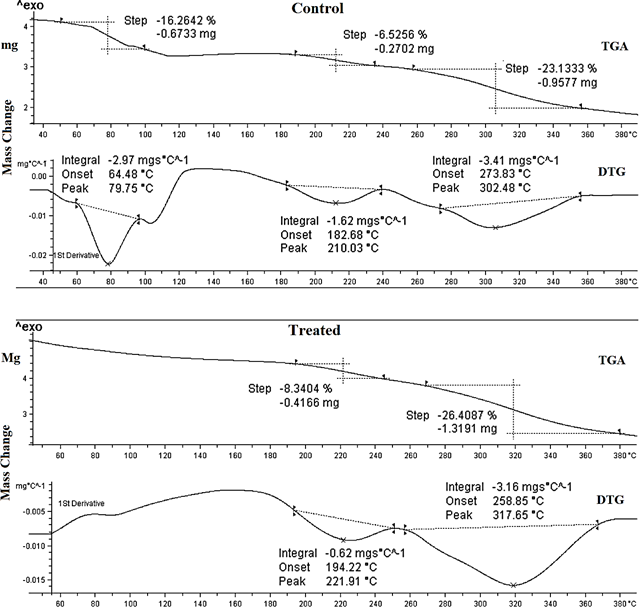 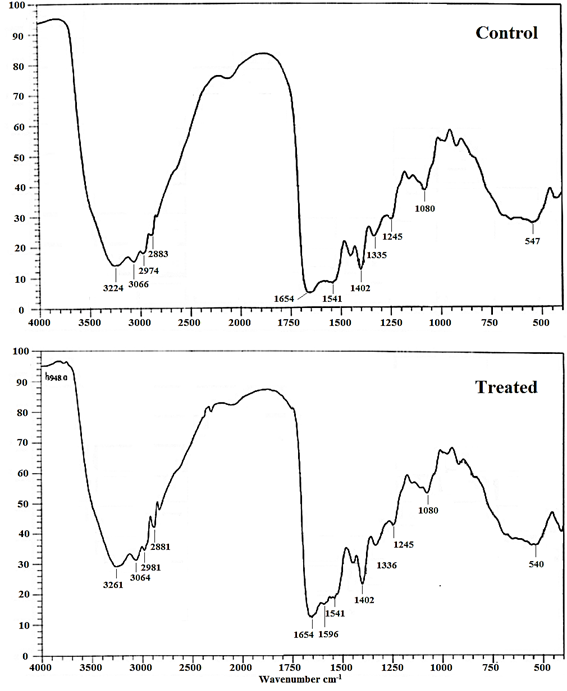 Overall, the present study concluded the considerable impact of Mr. Trivedi’s biofield energy treatment on physical, thermal and spectroscopic properties of protose. Based on this, it is anticipated that Mr. Trivedi’s biofield energy treatment can modify the physicochemical properties of protose so that it could be utilized as a better culture medium for the production of enzymes, antibiotics, and veterinary preparations.

The authors would like to thank the Trivedi Testimonials, Trivedi Science, and Trivedi Master Wellness for their support during the study. Authors would also like to acknowledge the whole scientific team of MGV pharmacy college, Nashik for allowing the instrumental facility.