Abstract: Thermostable amylase enzyme has a broad commercial value in its use in the processing of starch, sugar production, textile, paper, animal feed, pharmaceuticals and in the manufacture of detergents. This study aims to determine the optimum conditions of amylase production from the termofil bacteria Bacillus sp. RSII-1b isolated from a hot spring Lejja South Sulawesi and characterizing the amylase enzyme. The testing of amylase production was done with various concentration of starch and CaCl2 in the production medium, then fermented to obtain maximum amylase activity, amylase enzyme was produced in optimum condition, and its characteristic was tested using 2% starch substrates in various pH, temperature and determining the compound cofactor which can act as activators or inhibitors of the amylase activity, the enzyme activity was tested using DNS method. Crude extract enzyme has the highest enzyme activity of the protein content determined by the method of Lawry. The results showed that the amylase enzyme from Bacillus sp RSAII-1b isolates can be manufactured to a maximum at 33 hours of fermentation time with conditions: the concentration of substrate (starch) 1.5%, 0.08% CaCl2, 55°C temperature, medium pH 7.0 and aeration speed 200rpm with the activity of 0.1323U/mL, amylase crude extract protein content of 1.86mg/mL, with spesifik activity 0.0711 U/mg protein. Crude extract amylase work optimally at pH 6.0; 55°C -60°C the amylase activity of 0.165U/mL, the specific activity of 0.089U/mg protein. Amylase enzyme is an enzyme that depends on metal because its catalytic activity can be activated by metal ions Ca2+, Mg2+, Cu2+, Ni2+ and Co2+ as activators whereas Zn2+ ions decrease the activity of enzymes as inhibitors. Amylase activity in the crude extract optimum conditions with the addition of 10 mm ions Ca2+ can increase amylase activity up to 32,89%, while the addition of ions Zn2+ can inhibit amylase activity up to 25%.

Starch molecules are polymers of alpha-D-glucopyranose which will be broken down by amylase enzyme at alpha-1,4 and alpha-l,6-glycosides bonds [1]. This polymer is very abundant after cellulose, found in many sago, cassava, maize, millet, etc. Amylase is a hydrolytic enzyme that can hydrolyze the compound starch or starch as its substrate, and an enzyme that is important and its existence is greatest in the field of food and biotechnology, these enzymes are traded as much as 25% of the total other enzyme [2].

Amylase is generally produced by plants, animals, humans and microbes. Enzymes derived from termofil microbe and hipertermofil are more widely used in industry, especially industries that use high temperatures in the process. This happens because an enzyme derived from the microbe has thermo stability and optimum activity remains at a high temperature [3]. Microbes producing enzymes that are widely used in industry, namely fungi and bacteria [4].

Amylase enzyme has a high economic value, because in the food industry, α-amylase enzyme functions provide sugar hydrolys is of starch that can beutilized for the production of glucose syrup or fructose syrup that has a high level of sweetness to be used in the manufacture of bread, and baby food. In the textile industry α-amylase enzyme is used to assist in the removal of starch, which is used as an adhesive to protect the threads of woven in the bending moment. This process requires a temperature of around 70-80°C [5]. The usefulness of α-amylase under various conditions is strongly influenced by the stability of the enzyme [6]. α-amylase requires calcium ion (Ca2+) to increase the activity and to maintain the structure and stability.

Based on those informations, research on the production of amylase from termofil bacteria Bacillus sp RSAII-1b has been carried out. We report here the optimum condition of enzyme production and characterization of crude extract of amylase against the effect of pH, temperature and metal ions addition on the activity of the amylase enzyme.

2.1. Isolate Rejuvenation and Preparation of Inoculum

Rejuvenation of bacteria was done by taking 1 ose of bacteria isolates Bacillus sp RSAII-1b and then inscribed in the medium Luria Agar (LA) then incubated for 24 hours at 50°C. Next step is the preparation of inoculum on medium with the production medium composition inoculum used by [6] were modified. Composition of the medium: yeast extract 0.2%; bactopeptone 1%; NaCl 0.005%; MgSO47H2O 0.05%; CaCl2 0.015% and 1.0% starch. Medium production and inoculum medium has the same composition but varying starch concentration of 0.5%-2.5%, and the CaCl2 concentration of 0.01%-0.16%.

Bacterial culture isolates of Bacillus sp RSAII-1b taken 1 loop of culture ages 24 hours put into the medium inoculum subsequently incubated in a shaker incubator at 200 rpm temperature of 55°C for 24 hours [7]. Furthermore, 10% of inoculum active included in the sterile production medium with varying concentrations of soluble starch 0.5%-2,5%. The next incubated in an incubator shaker at 200rpm temperature of 55°C for 24 hours. Furthermore, the separa-tion of the cells from the medium by centrifugation at 3500rpm 30min, 4°C. Supernatant obtained a crude extract of the enzyme amylase, then tested its activity. Once known concentrations of certain starch which has the highest amylase enzyme activity.

2.2.2. Determination of the Concentration of CaCl2

2.2.3. Effect of Fermentation Time on Bacterial Growth (Optical Densit) and the Production of the Enzyme Amylase from Bacillus sp Isolates RSAII-1b

Amylase enzyme activity measurement principle is based on the calculation of reducing sugars from the hydrolysis of starch with DNS method [9] mixture of 0.5mL of 2% soluble starch; 0.5mL 0.1M phosphate buffer pH 7.0; 0.5mL of the extract amylase enzyme, incubated at 55°C for 60minutes, after the incubation was added 1.5mL of DNS reagent (salisilicnitrous acid) and then shaken and heated in boiling water for 10 minutes further cooled in ice water, and measuring absorbance by using a spectrophotometer at a wavelength of 430nm maximum.

This test using the method of Lowry [10], the Lowry B composition is Na2CO3 2% in 0.1N NaOH: 1% CuSO4: sodium-potassium-tartrate (100:1:1) and Lowry A is phospho-tungstic acid-phospho-molybdic (Folin): distilled water (1:1). The protein content is measured by using BSA (bovine serum albumin) as a standard and was measured using a spectrophotometer at a wavelength of maximum [10].

Amylase production is done in optimum condition and then conducted biochemical characterization of the nature of amylase about pH, temperature, and the influence of metal ions.

2.5.2. Determination of the Optimum Temperature

To determine the effect of metal ions that act as activators or inhibitors used several types of metal ions (MgCl2; CaCl2; CoCl2; NiCl2; and ZnCl2) with the same concentration as follows: 10mM. A mixture of enzymes, metalions, buffer and substrate respectively incubated for 60 minute further testing amylase activity in each of the ion species.

The production of amylase on starch substrate concentration effect seen in Figure1, incontrast with the amylase produced from Bacillusspecies of land at 50°C with a concentration of 2.0% starch [6].

3.1.2. Determination of the Concentration of CaCl2 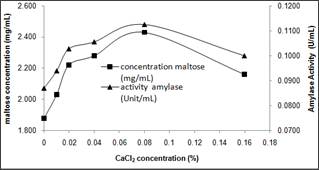 Figure 2. Effect of CaCl2 concentration on the production of extracellular amylase from Bacillus sp RSAII-1b isolates termofil bacteria. On the condition of fermentation: starch concentration of 1.5%; pH 7.0; temperature 55°C; 200rpm for 24 hours.

3.1.3. Effect of Fermentation Time on Bacterial Growth (Optical Density) and the Production of the Enzyme Amylase from Bacillus sp Isolates RSAII-1b

The growth of Bacillus sp. RSAII-1b began to occur a phase of adaptation to the hours -0 until the 12th, and growth increased with increasing fermentation time until the 24th hour later rose sharply until the hour-33 in this case is still going on logarithmic phase, the clock phase to 36 deaths occurred. Amylase enzyme began secreted at the 15thhour of fermentation that 0.0319U/mL and increased to 0.0925U/mL at the 24th hour, then becomes 0.1323U/mL at hour-33 with a specific activity of 0.0711U/mg protein and the subsequent decline in production of amylase (Figure3). This shows that the optimum conditions of production of amylase from Bacillus sp. RSAII-1b is the 33rd hour. Amylase crude extract protein content of 1.8612mg/mL.

pH is one of the factors that affect the activity of the enzyme, the results of research the effect of pH on the enzyme activity (Figure 4).

Figure 4. Effect of pH on the activity of Bacillus sp RSAII-1B conditions: substrate 2% and a temperature of 55°C using 0.1M phosphate buffer.

Figure 4 shows that the amylase enzyme activity increased to pH 6.0 with amylase activity of 0.1637U/mL and specific activity of 0.0879U/mg protein, and then begin to decline at a pH of 6.4 with 0.1536U/mL activity and declined sharply at pH 8.0 with the activity of 0.0749U/mL. Based on this phenomenon, indicating that the conditions of pH 6.0 is the pH optimum, pH of the enzyme amylase which is an optimum condition to form a complex enzyme substrate precise and produce the maximum. Change the charge on the molecule of enzyme can affect the activity, either by changes in the structure and the charge on the amino acid residues that bind to the substrate can function. Suppose an enzyme negatively charged to react with the substrate positively charged form the enzyme-substrate complex, then the pH value higher substrate will be ionized and lose the positive, the same thing at low pH enzyme will be protonated and lose negative charge[13]. Changes in H+ions present in the enzyme solution providing conformation effect on the enzyme so does the catalytic section. pH is too low or too high causes a conformational change in the enzyme that causes decreased activity. The optimum pH obtained in this study together with the optimum pH [12] from Bacillus sp were isolated in a hot spring that is pH 6.0(optimum).

3.2.2. Effect of Temperature on Amylase Activity 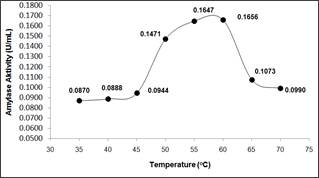 Figure 5. Effect of temperature on the activity of amylase of Bacillus sp RSAII-1b conditions: substrate is 2% and pH 6.0 phosphate buffer.

Figure 6. Effect of 10 mM metal ions on the activity of amylase crude extract of isolates of Bacillus sp.RSAII-1b at a temperature of 55°C and pH 6.0.

Based on the research results, it can be concluded that: Isolates of Bacillus sp.RSAII-1b can produce maximum amylase: starch concentration of 1.5%, 0.08% CaCl2 concentration and fermentation time 33 hours with medium pH 7.0 and incubation temperature 55°C, aeration speed of 200rpm with spesific activity 0.0711U/ mgprotein, crude extract amylase work optimally at pH 6.0; 55-60°C the amylase activity of 0.165U/mL, the specific activity of 0.089U/mg protein. Amylase is an enzyme that depends on the activity of the catalytic metal because metal ions can be activated by Ca2+, Mg2+, Cu2+, Ni2+ and Co2+ that are activators whereas ions Zn2+ decrease the activity of enzymes that are inhibitors. Amylase activity in the crude extract optimum conditions with the addition of 10mM Ca2+ ions can increase amylase activity up to 32.89% while ions Zn2+ can reduce amylase activity by 25%.