Abstract: The rapid rise in resistance of Staphylococcus aureus to various antimicrobial agents is now a growing concern. The objectives of this study were to investigate the frequency of Methicillin Resistant S. aureus (MRSA) in different cases of infection, and to determine the pattern of antimicrobial susceptibility among the S. aureus originated from human in Mymensingh, Bangladesh. Covering a period of five months during July 2014 to November 2014, a total of 65 samples comprises of pus, wounds, eye lesions, burns were collected from the Community Based Medical College Hospital (CBMCH), Mymensingh, Bangladesh, and the samples were processed at the Department of Microbiology and Hygiene, Bangladesh Agricultural University (BAU), Mymensingh-2202. Among the 65 samples, 20% (n=13/65) were confirmed as S. aureus on the basis of colony morphology, staining characteristics, biochemical properties, and Polymerase Chain Reaction (PCR) by amplification of nuc gene (amplicon size 279-bp). Among these 13 S. aureus isolates, 15.38% (n=2/13) were found to be resistant to Methicillin which was confirmed by antibiotic disk sensitivity test and PCR by amplifying MRSA specific mecA gene (amplicon size 533-bp). The antibiotic disk sensitivity test indicated that the MRSA isolates were completely (100%) resistant to Penicillin and Erythromycin. The MRSA represents a major challenge for treatment in hospital due to the emergence and spread of antibiotic resistant isolates among susceptible individual.

Staphylococcus aureus, a Gram-positive coccus, is a member of the Firmicutes, and is frequently found in the human respiratory tract and on the skin [1]. Methicillin was one of most common types of antibiotics used to treat S. aureus infections. Methicillin belongs to a comprehensive class of antimicrobials, the β-lactam antimicrobials or β-lactams. The mode of action is inhibition of bacterial cell wall biosynthesis. The 1st Methicillin Resistant S. aureus reported in UK just 2 years after the introduction of Methicillin in 1959 [2]. MRSA are often described as community associated or healthcare associated. The MRSA is only susceptible to Vancomycin but it has a carcinogenic effect.

A total of 65 Samples (Pus, Burn, Wound, Eye lesion) were collected from Community Based Medical College Hospital, Bangladesh (CBMCB) during the period of July 2014 to November 2014 [3,4]. The collected samples were inoculated into nutrient broth (Merck Specialties Private Limited) and incubated at 37°C for 3-4 hours followed by inoculation onto 5% sheep blood agar media and incubated at 37°C for overnight. The plates showed β-hemolysis was suspected as S. aureus. Pure culture of S. aureus was obtained by repeated sub-culturing onto blood agar media [5].

Gram's stain was performed in order to observe the morphology of bacteria under light microscope, as per the method described by Jahan et al. [6].

This test was carried out to differentiate the Staphylococci from non-catalase producing Streptococci. The test was done according to the procedure described by Zarzour and Belle [10] and Jahan et al. [6].

This test was carried out to distinguish between strains of Staphylococci. For the coagulase test, rabbit plasma was used in this study. The test was done as per the procedure described by Zarzour and Belle [10] and Jahan et al. [6].

2.6. Extraction of DNA by Boiling Method

A single colony of S. aureus was taken in 200 µL of DW in eppendorf tube, mixed well and then boiling for 10 min. After boiling, the tubes were immediately placed on ice for cold shock for 10 minutes followed by centrifugation at 10,000 rpm for 10 min at 4°C. The supernatant was collected which was further used as template DNA.

The suspected Methicillin resistant S. aureus was confirmed by PCR using MRSA specific mecA gene, with an expected protocol size 533 bp. The DNA of S. aureus which showed resistant to Oxacillin in the disk diffusion method was taken for the detection of mecA gene by PCR [11]. For this purpose, mecA gene Forward primer and Reverse primer were used that mentioned in Table 1.

The amplified PCR products were resolved by electrophoresis in 2% agarose gel at 100-V for 30 minutes, stained with ethidium bromide and finally visualized under UV trans-illuminator [11].

Then sterile cotton swab was dipped into the bacterial suspension and excess fluid was removed by rotate pressing with the inner wall of the suspension tube. The bacteria from the swab were inoculated onto the Muller-Hinton surface, rotating the plate three times at 60 degrees. After drying, the antibiotic disks (Penicillin, Neomycin, Oxacillin, Erythromycin, Vancomycin & Ciprofloxacin) were placed on the plates.

The plates were incubated in an inverted position overnight at 35°C. The diameter was measured for each zone of inhibition that appears around the disk. The results were recorded in millimeters. Inhibition zone diameters were compared to the reference list of the manufacturer.

Methicillin resistant S. aureus (MRSA) has emerged worldwide as a significant public health problem both in human and animals. S. aureus is an important pathogen causing infections in skin and soft tissue as well as food poisoning too. To treat S. aureus related infections, it is important to have adequate information and understanding the trends of antibiotic resistance patterns of those respective bacteria.

The clinical samples (n=65) were collected from both sexes and prevalence was found more in female (55%) as compared to males (45%). Out of the 65 samples, S. aureus could be isolated from 20% (n=13/65) samples, and mecA was detected in 15.38% (n=2/13) isolates. In Gram’s staining method, it showed smooth, convex, approximately 1 mm in diameter, grape-like clusters when viewed under light microscope, as reported by Tanzin et al. [11]. It has large, round, golden-yellow colonies, with β-hemolysis on blood agar plates (Figure 1 and 2), as reported by Kenneth [14] and Stavropoulos et al. [15]. 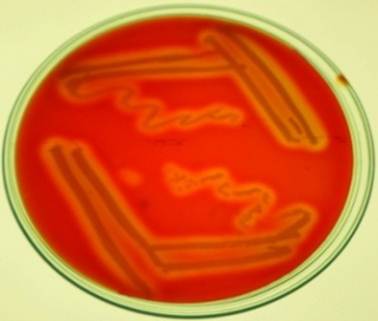 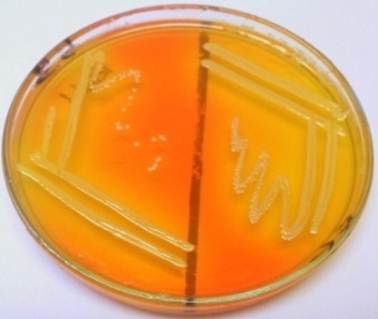 Figure 2. Fermentation of MSA by Staphylococcus aureus indicated by formation of yellowish colony.

Figure 3. Catalase test (slide test). The positive result is indicated by formation of bubble due to release of oxidation of H2O2 by catalase enzyme. 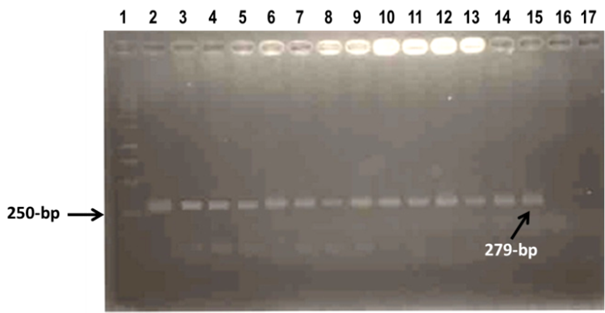 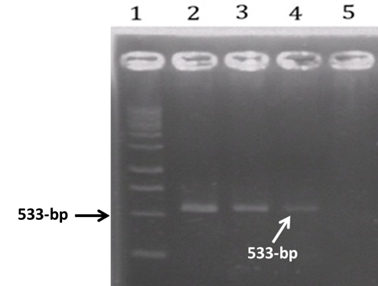 All 13 isolates were found both catalase and coagulase positive (Figure 3 and 4). In antimicrobial susceptibility test, both the MRSA strains were resistant to Oxacillin, Erythromycin, Neomycin, Penicillin G and intermediate resistant to Ciprofloxacin. The isolates were sensitive to Vancomycin which is nearly similar to the findings of Anupurba et al. [16], Rajaduraipandi et al. [17], Parveen et al. [18] and Tanzin et al. [11].

PCR based molecular detection was performed to identify the S. aureus and MRSA. Amplification of nuc gene by PCR was used for the rapid identification of S. aureus. All the 13 isolates were confirmed as S. aureus by PCR (Figure 5). After the confirmation of S. aureus, amplification of mecA gene confirmed that 2 isolates were MRSA (Figure 6). The overall prevalence of MRSA was found as 15.38% (n=2/13). This result is lower than the study of [19] who detected 25% MRSA from human. This might be due to the variation in host and immune status of the host.

The high level of multiple drug resistance shown by the MRSA isolates in this study is of great concern. All the MRSA isolates showed resistance to at least 4 antibiotics, indicating the presence of strong selective pressure from antibiotics use for human patients. Using methicillin disk diffusion method for detection of MRSA has the same sensitivity and specificity as PCR assay. The prevalence of MRSA among the S. aureus isolates in Bangladesh is 15.38%, which is slightly lower than that reported on previous study in Bangladesh. The prevalence of MRSA differs throughout the country. It depends on several factors such as indiscriminate use of antibiotics without sensitivity pattern of the infected organisms. For that reason, commensal organisms such as CNS acquired resistance to methicillin which may transfer to pathogenic S. aureus. On the other hand, hospital environment may play an important role to spread the infectious agents due to over-crowding of patients and attendants and unhygienic environment.